The Breadfruit & Rum Bar is Back, But This Time At An Acclaimed Cocktail Bar The Breadfruit & Rum Bar, a beloved Jamaican restaurant that closed in March 2020 after 12 years, is taking over the kitchen of the bar on Central Avenue and Jefferson Street. 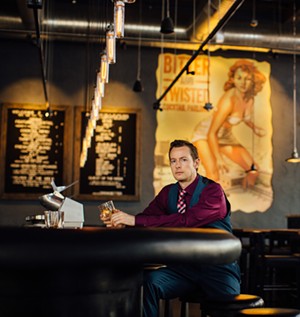 Ross Simon of Bitter & Twisted.
Wendy Rose Gould
"Please welcome @thebreadfruit to the family. For the foreseeable future we have partnered up and will be dishing out incredible authentic Jamaican food. I know we aren't the only ones that missed that Jerk!" read an announcement posted to Bitter & Twisted's Instagram account announcing the collaboration on Thursday.

Ross Simon, a cocktail industry veteran and owner of Bitter & Twisted, has partnered with other local food concepts in the past.  Gemini Pizza, a New York-style pizza joint that debuted in April, recently moved out of the cocktail bar.

Racan Alhoch of another locally-adored concept Saint Pasta ran the pizzeria and snack bar out of Bitter & Twisted until earlier this month. He announced his departure from the space on Instagram, and teased an upcoming move for the pizza concept.

"Last chance to get @eatgeminipizza for who knows how long!" a post shared to the pizza concept's page from local food blogger @eatinarizona reads. "The pizza pop up of my dreams will be coming to a close on September 17th so get down to @bitterandtwisted_az to get some pizza before they close!"

Gemini Pizza's departure made way for The Breadfruit to move a few blocks south, from its original location at First and Pierce Streets. The restaurant carried over 150 premium rums and fine cigars in addition to some of the best Jamaican food in the Valley.

Fans have been eagerly awaiting the restaurant's return, but now, The Breadfruit's website greets curious customers with some cryptic reopening news.

"We’re taking this time to put the finishing touches on part II of our story," the site reads. "Under the hood, we’re beefing up the engine (kitchen) to more efficiently deliver on our promise of nothing but conscious deliciousness."

For those of us who miss tender sea scallops in Jamaican jerk rub alongside sauteed plantains with sweet mango chutney, the reincarnation cannot come soon enough.
KEEP PHOENIX NEW TIMES FREE... Since we started Phoenix New Times, it has been defined as the free, independent voice of Phoenix, and we'd like to keep it that way. With local media under siege, it's more important than ever for us to rally support behind funding our local journalism. You can help by participating in our "I Support" program, allowing us to keep offering readers access to our incisive coverage of local news, food and culture with no paywalls.
Make a one-time donation today for as little as $1.