Pecan. Pie. Beer. Sounds pretty wild. Sounds like ambitious suds from a local brewer who founded Wren House (along with Drew Pool and Bill Hammond) a mere two years ago.

But Thoeny doesn’t stop there.

The aromatic wort (starchy water) cooking in the boil kettle will, after fermentation, become wheat wine. Wheat wine is similar to its better-known cousin, barley wine, only the dominant grain is not barley but wheat. It'll be a hard-hitting brew at 10 percent-plus ABV.

But wait — the pecan pie wheat wine gets even funkier.

Thoeny — tall, mustachioed, a man who measures his thoughts before softly voicing them — is sporting a Little Miss BBQ hat.

Little Miss BBQ had Thoeny’s 75 pounds of pecans the day before. The ‘cue spot smoked the nuts over pecan wood. Before I stopped by, Thoeny dumped 10 pounds of pecans in the mash. The rest would go in soon.

To taste, the smoke is barely there, giving the brain-shaped nut a slight toasty flavor, stopping well short of the ash you get on the bark of brisket.

This pecan pie beer was actually Little Miss BBQ’s idea. Thoeny is a huge fan of Little Miss’ brisket, and, thanks to a mutual friend, was able to score Little Miss as one of the caterers at his wedding.

“I bring them beer. They give me meat,” Thoeny says of the relationship. “Scott [Holmes] of Little Miss pitched me last year, and we got to the beer now.”

As you probably already know, collaborations are all the rage in the world of craft beer. For these partnership beers, brewers link up with other food producers. The non-brewer provides coffee or peaches or pecans or whatever, and the brewer uses them to brew a cool beer.

This week, Thoeny will be heading to Superstition Meadery to collaborate on a mead. He gives spent grain to Noble Bread here in Phoenix for baking and has partnered with the bakery to brew a German rye. To local food artisans with cool idea for beer, his message is this: "Bring it on."

With the wheat wine under construction, Thoeny hopes to recreate the flavors of Little Miss' pecan pie.

“We’re going for big pecan pie sweetness,” Thoeny explains. He hopes to do this by adding lactose and using a high strike temperature to create unfermentable sugars, which can’t be converted to alcohol, meaning they end up as sweetness (and body).

Thoeny started with about 2,000 pounds of grain and well over 1,000 gallons of water. Striking, one of the first steps in brewing, occurs when the brewer combines the two into a mash. For the pecan pie beer, automated arms in Thoeny’s 10-barrel mash tank paddled wheat, barley, and water for an hour.

Next, Thoeny rested the mash for 45 minutes.

After this, he recirculated the wort for 15 minutes. This entails running the wort through the raft of grain that forms in the tank, clarifying the liquids and filtering away unwanted solids, which lodge in the mass of grain.

From here, Thoeny routed just the liquid (wort) to the boil kettle, leaving the solids behind (a rancher picks them up and feeds them to his cattle). He started to boil the wort. The boil takes between 90 minutes and two hours.

As I wait, I drip sweat and try to imagine the flavor of a pecan pie wheat wine.

Thoeny signals he’s ready to add the pecans. He scoops them into loose nylon bags that look like tea sachets. Toting these, he climbs a ladder to a landing level with an opening in the top of the boil kettle.

One-by-one, he floats in the pecan bags. 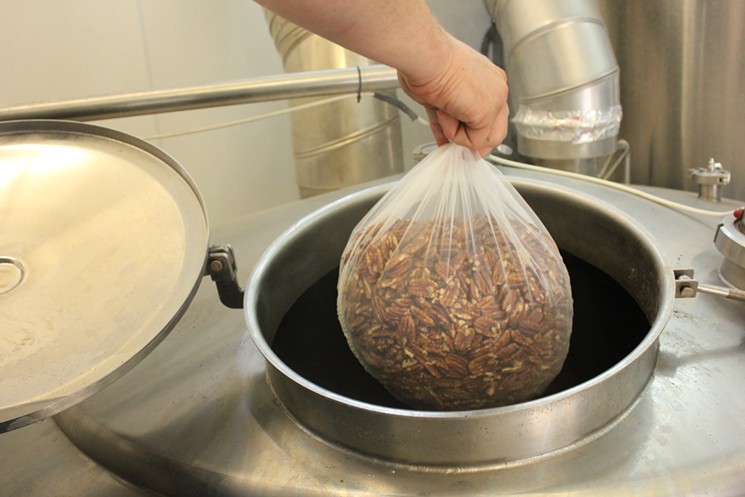 Nylon sachets of smoked pecans about to hit boiling wort.
Chris Malloy
The pecans stay in for the last minutes of boiling. Thoeny also adds dry hops, milk sugars, and yeast nutrients. Now the boil ends. The hard active work is over. Into a 20-gallon fermentation tank of flashing steel to the ceiling goes liquid that will taste faintly like pie and get you totally wasted.

At the crucial two-week mark, Thoeny will make a few changes. One will be adding vanilla “to meld with the beer” during a slower secondary fermentation lasting four weeks.

“We’re hoping to get 12 to 15 barrels worth,” Thoeny says. “If so, we’ll can or bottle a large amount of that. The rest we’ll put in whiskey barrels and release later in the winter or early in spring.” The pecan pie wheat wine will also be available on draft in Wren House's taproom.

The ambitious beer will emerge from a 20-barrel steel fermentation tank and into the world sometime at the end of October or early November. Wren House and Little Miss plan to host a release party, you and me and everyone else invited.

Regarding that bash and how the brew tastes, we’ll keep you in the loop.