Lady Gaga and dancers at Coachella Mathew Tucciarone
As 100,000 people — according to Lady Gaga — assemble for her second headline slot at Coachella, fans are wishing each other a Happy Gaga Day. But the celebrations are premature. We all know Gaga isn't even supposed to be here, having replaced Beyoncé as headliner less than two months before the festival. You don't doubt that Gaga, a bona fide superstar, can pull it off. But Gaga seems to doubt it.

She follows a spiritual set from Bon Iver, a set that was truly outside itself. Dressed in a simple white T-shirt with the word "PEOPLE" on it, Justin Vernon proved himself to be both exceptional and nevertheless built of the same flesh and blood as the rest of us gathered here. It was inspiring and truly overpowering. Vernon and his band present the possibilities for sonic excellence, and their leader does it while looking like he hasn't had a haircut for a year. It's selfless, communal and flies in the face of pandering to the system. It feels like the future.

It's a very hard act for Gaga — a phenomenal success of the system, one of the biggest commercial pop stars of the past decade — to follow. She comes out to a black screen of 1s and 0s and an octopus's tentacle suffocating her mouth. It's a juxtaposition of pop art and perhaps a nod to the fact that she was the first artist to conquer the internet as she did. But the tentacle seems to bode something ill for the rest of the set. To put it bluntly, Gaga seems gagged tonight. By whom? Her label? Her manager? (Both of which she bizarrely thanks towards the end of the set, like she's receiving an Oscar.) Or ... is it us?

Last week's set didn't offer up a comfortable-looking Gaga. The crowd didn't go as wild for her here as they've done over the years at Gaga's own enormo gigs. So as she bounds out to "Scheiße," a deep cut from Born This Way, her eyes look ravenous, her muscles flexed, her inner fire burning. She wants to make tonight a lot more epic than last week's set.

For a while, it works. Who can deny the old school fun of "Just Dance" and "Lovegame," the romantic choreography of "Alejandro," the unifying campiness of "Born This Way" or the fresh energy of newer songs such as "John Wayne" and "A-Yo," the latter of which has Gaga rocking a Gibson like she's in one of the metal bands she grew up idolizing?

Soon enough though, something appears off. She admits to nerves when she begins the set. The first, most telling signs of unease come with her likely scripted yet nonetheless significant speech before "Just Dance," the 2008 hit that launched a lifetime of thinkpieces and Gaga's career. "You know it was many many years ago that I wrote this song and they said, 'We think this is the big one,'" she says. "And I remember I closed my eyes and I played just about every club in this country and every country around the world that I could find. And one day I opened my eyes and you were all standing right there. You changed my life forever, you know that right? It's never been the same." 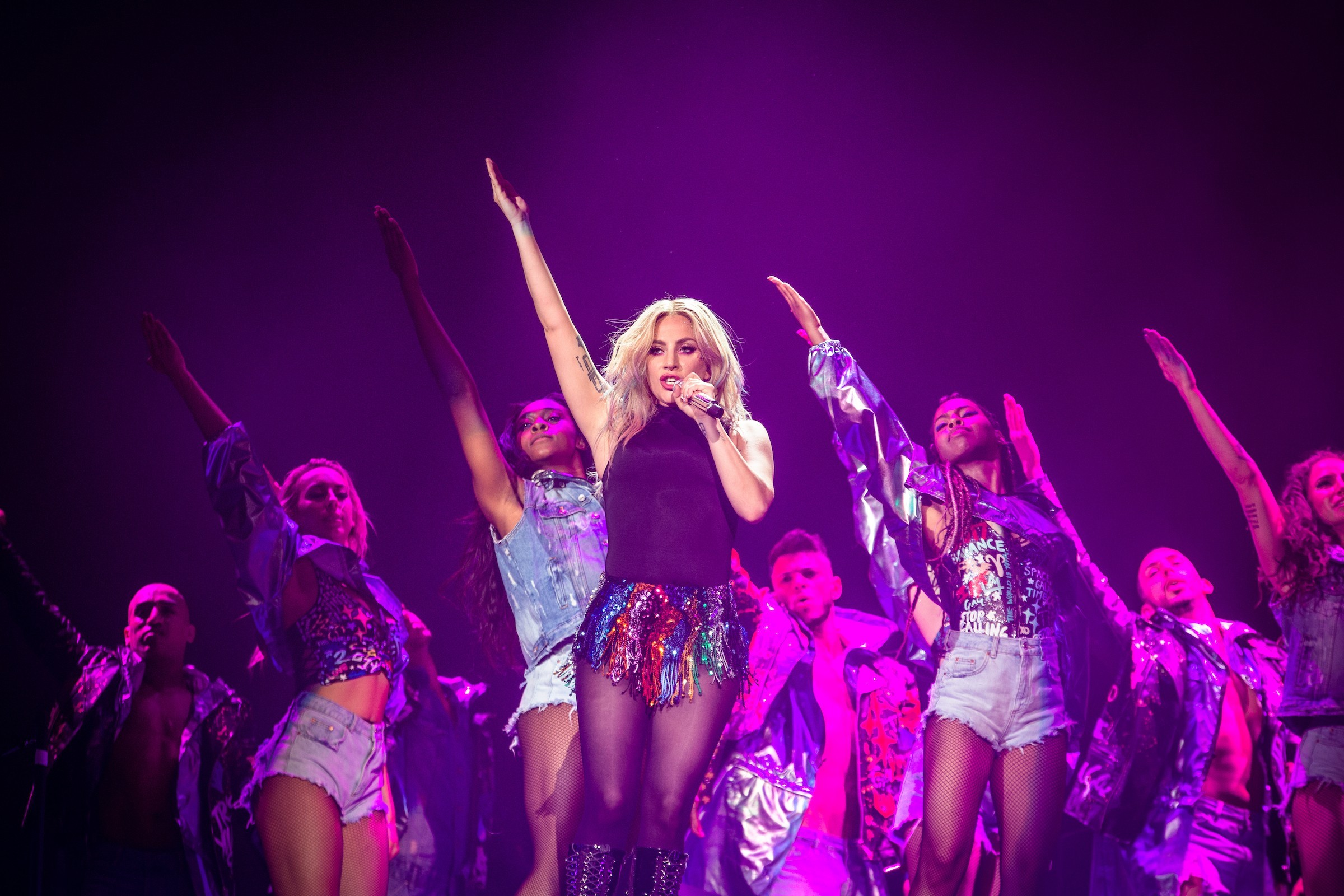 Greg Noire/Goldenvoice
When Gaga first emerged, she was the rebel, the outsider, the leader of the kids who needed a guide in the dark. It's a role she still tries to play. "I really dislike the bullies," she says before playing "Teeth," coaxing the crowd to "take a bite of my bad girl meat" in the lyrics. "They don't really have the strength so they gotta fake it. When I was young I learned to scare 'em first."

But over the course of her set, Gaga's front unravels. At the age of 31 it looks like she hasn't had time to discover how to fight her manipulators, her trolls and her own demons. Perhaps she doesn't know what it is to be Gaga without being under a spotlight. Moments in the show look like moments she'd never sanction were it not for the comparatively weaker sales of her latest album, Joanne. It's hard to believe Gaga would want to do an EDM version of "Million Reasons," the song that forms the crux of Joanne, a record that's supposed to be her most authentic, her most bare-faced. It farts its way out of the sound system, the polar opposite of polishing a turd. You also doubt Gaga really wanted to do a new song, "The Cure," whose R&B flair seems meant to drag her back to her early days. The pyro was saved for "The Cure," in case it wasn't quite the moment her team wanted it to be.

As she sits at her piano and begins to tinker away at "The Edge Of Glory," it reminds me of seeing her on the Fame Monster tour seven years ago. Despite all the bombast and over-the-top production, the moment that stuck with me was when she sang "Speechless" at the piano in front of thousands. Just Stefani Germanotta and that voice, which was undeniable. I'd never seen her look more cozy or confident.

Tonight, she returns to her piano stool, but life has gotten more real. She dedicates "The Edge of Glory" to her friend Sonja, who has cancer. During the song you could hear a pin drop. It's a level of intimacy that stops the audience in their tracks. It's odd, however, that Gaga's version of intimacy is singing in front of tens of thousands. Us and Gaga, unlike us and Justin Vernon, are not one and the same. "It isn't hell if everybody knows my name tonight," she sings, and the line hits you like a truck. As the song finishes, she looks not out to the crowd but to the sky. It looks like she's searching for answers to questions we can't help her with.

The set never recovers. During "Applause," Gaga doesn't appear onstage at all, which you'd love to believe is post irony, but you get the impression she had to take a break for a song due to the emotional wobbling that just came before. "I live for the applause, applause, applause," appear on a huge karaoke screen. The entire song is performed by a teleprompter. It's her most on-the-nose song about the need for fandom, and it's extraordinarily spooky that there's no figure to receive our accolades. It's as if Gaga isn't sure whether the adulation is really what she wants any more.

Even "Poker Face" and "Bad Romance" can't salvage the set. Gaga introduces the latter with a speech about how she wrote songs about things that were bad for her. But eight years later, she barely utters the infamous line, "I'm a free bitch, baby." Lady Gaga didn't look free tonight; she looked stuck between a rock and a hard place. 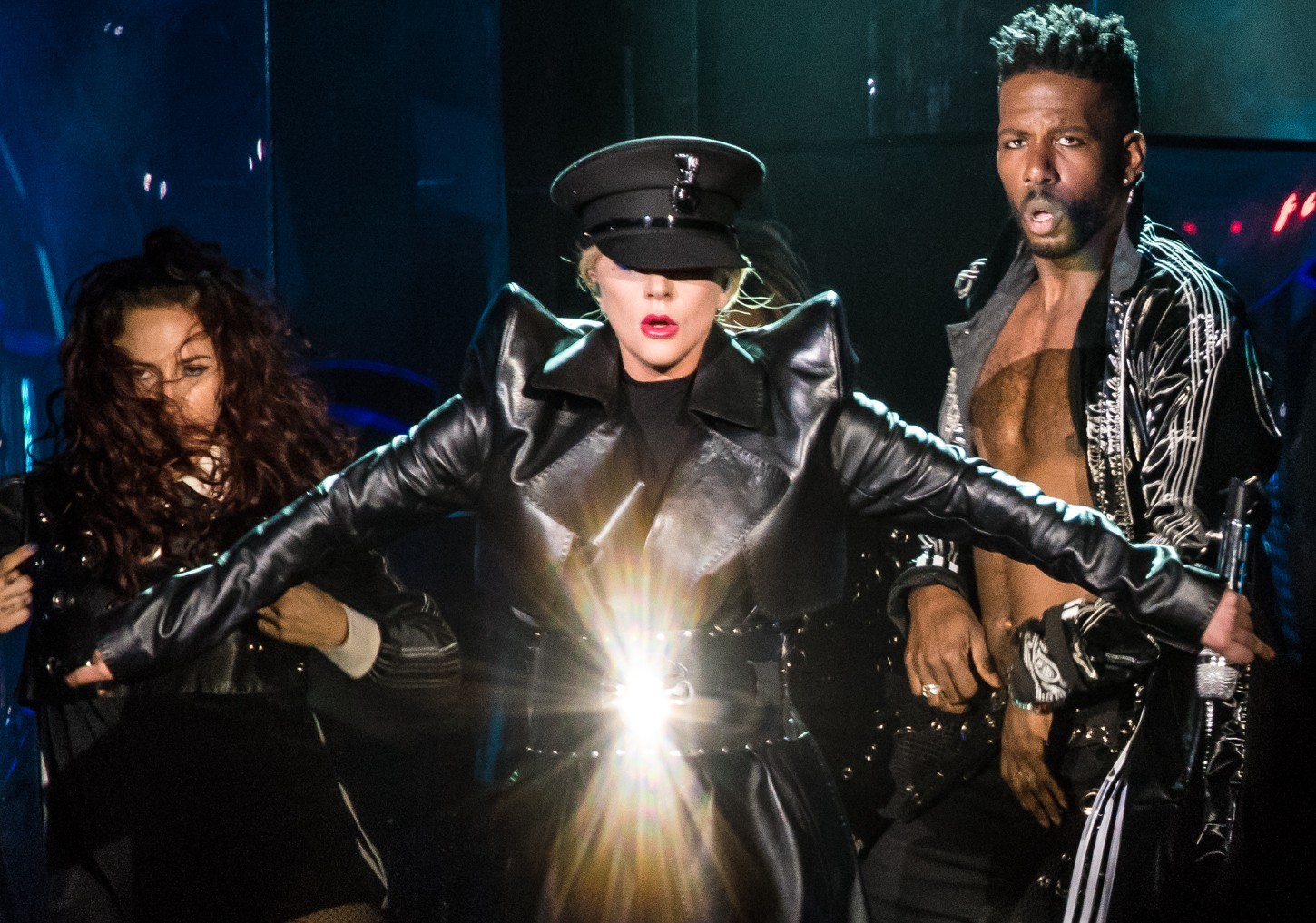