Amelia Walsh and Stephanie Neiheisel are the brain trust behind the Marry Mart. Ryan M. Walsh
Phoenix, we planned your week so you don't have to. And, spoiler alert? It's pretty great. From theater and zombie interactions to fresh art exhibitions and a peek inside one of the Valley's best neighborhoods, you're gonna be busy. See the New Times' curated online calendar for even more ways to spend your week.

The Marry Mart
So you and your sweetheart have decided to take it beyond Facebook official and get engaged. You’re over the moon, but now the hard work begins: planning the wedding. Lucky for you, Stephanie Neiheisel of SN Makeup Artist and Amelia Walsh have created an event that won’t feel like “work” at all. The Marry Mart is a relaxed wedding planning event featuring some of the top vendors in town. In one stop, you could plan your entire wedding from 11 a.m. to 5 p.m. on Monday, February 20, at the Paseo, 3752 North Apache Trail in Apache Junction. For tickets ($5) and more information, visit The Marry Mart website. Evie Carpenter

Arizona Coyotes vs. Anaheim Ducks
Under natural circumstances, a contest between coyotes and ducks would be a bloody massacre — gross. But at the highest levels of the equally ferocious hockey kingdom, the pecking order falls in reverse. The Anaheim Ducks are indeed mighty when compared to our faltering Arizona Coyotes. Still, the Ducks haven’t traveled particularly well this season, hovering slightly above the .500 mark. In the meantime, the Coyotes have scavenged slightly below. Given the numbers, the Valley’s own puck-wielding pack might just stand a decent chance of replicating nature when an otherwise superior flock of Ducks visits Glendale’s Gila River Arena, 9400 West Maryland Avenue, on Monday, February 20. The puck drops at 7 p.m. Tickets are $16 and up. Visit the Arizona Coyotes website or call 623-772-3200 for details. Rob Kroehler

This exhibition might change the way you think about art, violence, and community.
Photo courtesy of ASU Art Museum.
“Ciudad Juárez Projects"
Based in Mexico City, Belgian-born artist Francis Alys decided to create an art exhibit with the people of the Mexican border town of Juárez, rather than merely making art about them. For many people, the city’s name conjures thoughts of extreme violence within a dangerous urban landscape, but Alys’ work takes a deeper look at both the place and its people.

Explore the result, an exhibition titled “Ciudad Juárez Projects,” between 11 a.m. and 5 p.m. on Tuesday, February 21, at the ASU Art Museum, 51 East 10th Street in Tempe.

At Big Gay Singalong: Moulin Rouge!, attendees get vocal during a screening of director Baz Luhrmann’s decadent period piece set at the legendary French cabaret. Just like in his version of Romeo and Juliet, Luhrmann blends in contemporary pop music — this time, it’s acts like Nirvana and Queen. Dress up, too, as costumes are encouraged. Drink specials and prizes will be given away before the movie. Channel your inner Cobain at 7:30 p.m. on Wednesday, February 22, at FilmBar, 815 North Second Street. Admission is $14. Call 602-595- 9187 or visit FilmBar's website. Amy Young

Get the lowdown on fence posts at Scottsdale Museum of the West.
Joe Jeffrey
“Between You, Me, and the Fencepost”
Joe Jeffrey has a thing for fence posts. It’s rooted in his upbringing on a Nebraska ranch and attendance at a one-room schoolhouse in a part of the country where fence posts are common and have some intriguing variations in form and function.

Today, Jeffrey is something of a fence post evangelist, eager to share his treasure trove of fence post photographs and lore. Gather round for his fence post tales when Scottsdale Museum of the West, 3830 North Marshall Way, presents “Between You, Me, and the Fencepost” at 1 p.m. on Wednesday, February 22. It’s free with museum admission, which is $13 for adults and gets you into an intriguing assortment of exhibitions where you’ll spot fence posts that have made their way into fine art. Visit Scottsdale Museum of the West's website. Lynn Trimble

Moonflower by Lee Yun Qin is one of several light-based artworks coming to Canal Convergence 2017.
Courtesy of Scottsdale Public Art
Canal Convergence
It’s all about water, art, and light as Scottsdale Arts presents its four-day Canal Convergence festival along the Scottsdale Waterfront, between Scottsdale Road and Goldwater Boulevard. Show up any time between 4 and 10 p.m. from Thursday, February 23, through Sunday, February 26, to enjoy light-based art installations and an eclectic mix of visual art, dance, music, poetry, and film. This year’s lineup includes local, national, and international artists.

Highlights include live Canal Creatures painting by Phoenix muralists Isaac Caruso and Ashley Macias, a Walk on the Wild Side with ASU’s Museum of Walking and Scottsdale Museum of Contemporary Art, Four Chambers poetry readings inspired by Canal Convergence art installations, and a Night Lights bike ride. You’ll pay $10 for Conversation with the Artist events, but most of the other offerings (aside from food, drink, and shopping) are free. So get ready to make some serious light moves. Visit Scottsdale Public Art online for details, including daily schedules. Lynn Trimble

DJingo
If your friends hate listening to tunes with you because you never stop spouting trivia tidbits, we know about an evening out where your constant chatter might earn you some goodies.

Get a team together to compete at DJingo on Thursday, February 23. The event, hosted by DJ Heimbuck and Compton, lets you drop knowledge during five rounds of competitive music trivia. This game is played bingo-style; you and your team answer questions while trying to connect a bingo on your card. Prizes include concert tickets, gift certificates, and vinyl. Sign up to show off at 6 p.m. The first round starts at 7 sharp at Crescent Ballroom, 308 North Second Street. Admission is $10 in advance and $15 at the door. Call 602-716- 2222 or visit Crescent Ballroom's website. Amy Young 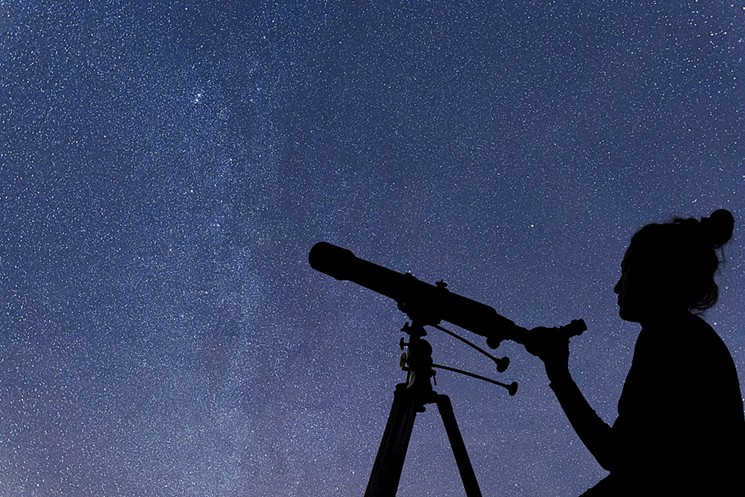 Attendees can peep the night skies from 7 to 10 p.m. on Thursday, February 23, through high-power telescopes with the assistance of the Phoenix Astronomical Society. Events are a partnership between the society and the college’s astronomy faculty.

RSVPs are requested by e-mailing [email protected] to ensure there are enough telescopes for everyone. Star parties are free and open to the public. For more information, call 602-561-5398 or see Paradise Valley Community College's website. Lauren Cusimano

Read on for a zombie apocalypse, a home tour, and a serious throwback Saturday.