The Montana native has lived in Phoenix for 12 years. The Valley's culture and easy access to trails got her started with trail running in her late 20s, even though, she says, she was never the athletic type growing up. “I played tennis in high school,” she says. “But that was more social.”

Malloy in trail race mode.
Courtesy of Rachel Malloy
Malloy says she prefers trail to road running as a superior form of mental exercise as much as physical. She often goes solo in spots like the preserves of Cave Creek, which prepares her for the many group races she’s affiliated with under Aravaipa Running – including Cave Creek Thriller, McDowell Mountain Frenzy, and Coldwater Rumble.

“With the trail, you’re constantly focused on where your foot’s going to go next,” she says. When coursing through the Valley's wilderness areas, Malloy says she feels present, in the moment, and self-assured. “I feel confident. I’m capable. I’m strong,” she says. “I can be out here with these other people, who in my mind are really amazing and I admire them, and here I am with them in the mix.”

Even when returning to visit her former home of Bozeman, Montana, she makes time for favorite spots like Gallagator Trail, Drinking Horse Trail, and Peets Hill.

“Trail running – I guess it's like a weird form of meditation,” she says, “What do they say? ‘Moving meditation.’”

With a few years of experience under her belt, Malloy has fine-tuned the gear she needs for trail running, preventing injuries, and making a swift recovery. These are her essentials. 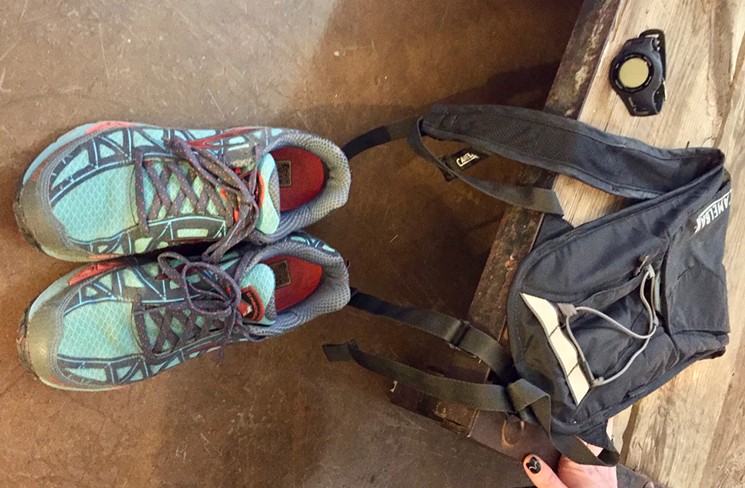 Malloy gets the gear – specifically Brooks Shoes from Runner's Den – for trail running in the desert.
Lauren Cusimano
Gear
“Brooks are my favorite trail running shoes,” Malloy says. “And I do get them from Runner’s Den.” Open since 1978 at 16th Street and Maryland Avenue, the store is one of the Phoenix running community's retail staples. Malloy also sports her Garmin Forerunner 210 GPS watch, and a smaller Camelbak Hydration Pack. “Less is more as far as the Camelbak goes,” she says, adding that it's “crucial for water … and snacks.”

This foam roller has a hidden feature.
Lauren Cusimano
Foam Roller
“I struggle with Achilles tendinitis, so I’m all about recovery,” Malloy says. Her injury happened in 2015, and affects the Achilles tendon at the heel and along the back of the leg. Coming back from that injury, Malloy relies on a foam roller to help massage sore areas. “This particular foam roller, it vibrates,” Malloy says of the black HyperIce Vyper. “It’s like the lazy person’s foam roller, because all you have to do is lie on it." 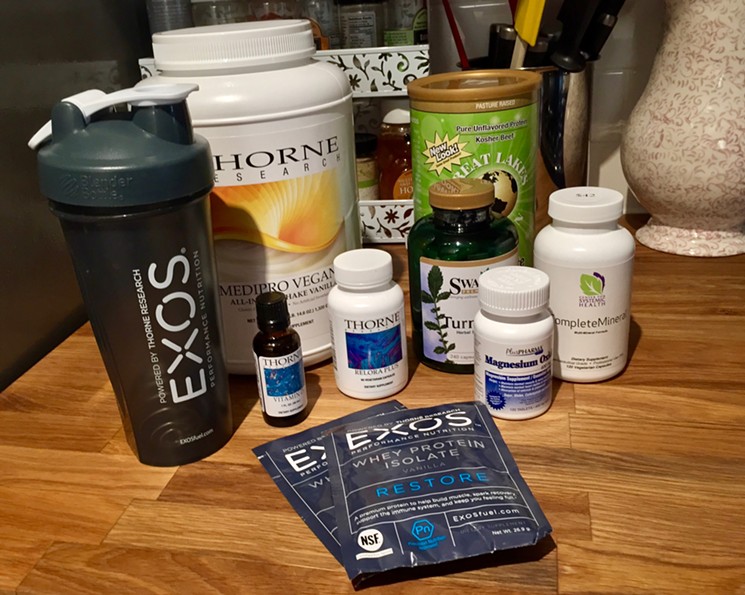 Malloy does cross training at her gym, Exos.
Lauren Cusimano
Cross Training
If you’re wondering, the answer's no. Malloy does not run trails in the summer. “Not this pale-skinned girl,” she says. “Heck no.”

Malloy also has a gym, and goes to Exos to work with her personal trainer, Joel Sanders. She says he's helped her understand the importance of weight lifting and finding a balance to her workouts. “It’s also helpful for me to cross-train so I don’t get injured,” she says. “It’s so important to have a little bit of a plan, and make sure that you’re taking care of your body and not overdoing it.”

Malloy also uses supplements from her gym, which she has displayed nicely on her kitchen counter. “You can tell what I do what a living,” she says, laughing, “I can't help but merchandise.”

Malloy's lucky race shirts.
Lauren Cusimano
Lucky Shirts
“These are two of my favorite shirts that I like to wear when I’m doing a race,” she says, “I don’t know why, they just became lucky.” Going for a customized look, Malloy’s lucky shirts have the sleeves cut off, and one has a little V is scissored out of the neck.

“This one is from Hamilton the musical, which I became obsessed with last year,” she says, pointing to the one on the right. She’s seen the original cast twice in New York, but now that it’s so popular, she’s a little over it.

Malloy's mini trampoline can bounce out a bad mood, and more.
Lauren Cusimano
Mini Trampoline
On days she can't hit the trail, Malloy has the perfect trick for getting out of a slumpy mood: her mini trampoline.

Malloy recommends a few minutes of bouncing if “you’re in kind of a bad mood, or you can’t get out of your head, or something,” She likens it to a flushing, and says it's good for digestion, the lymphatic system, and immunity, in her opinion. “For me,” she says, “it’s very healthy in all sorts of ways.”