Degrassi: Next Class Recap: Doubling Down on Double Standards 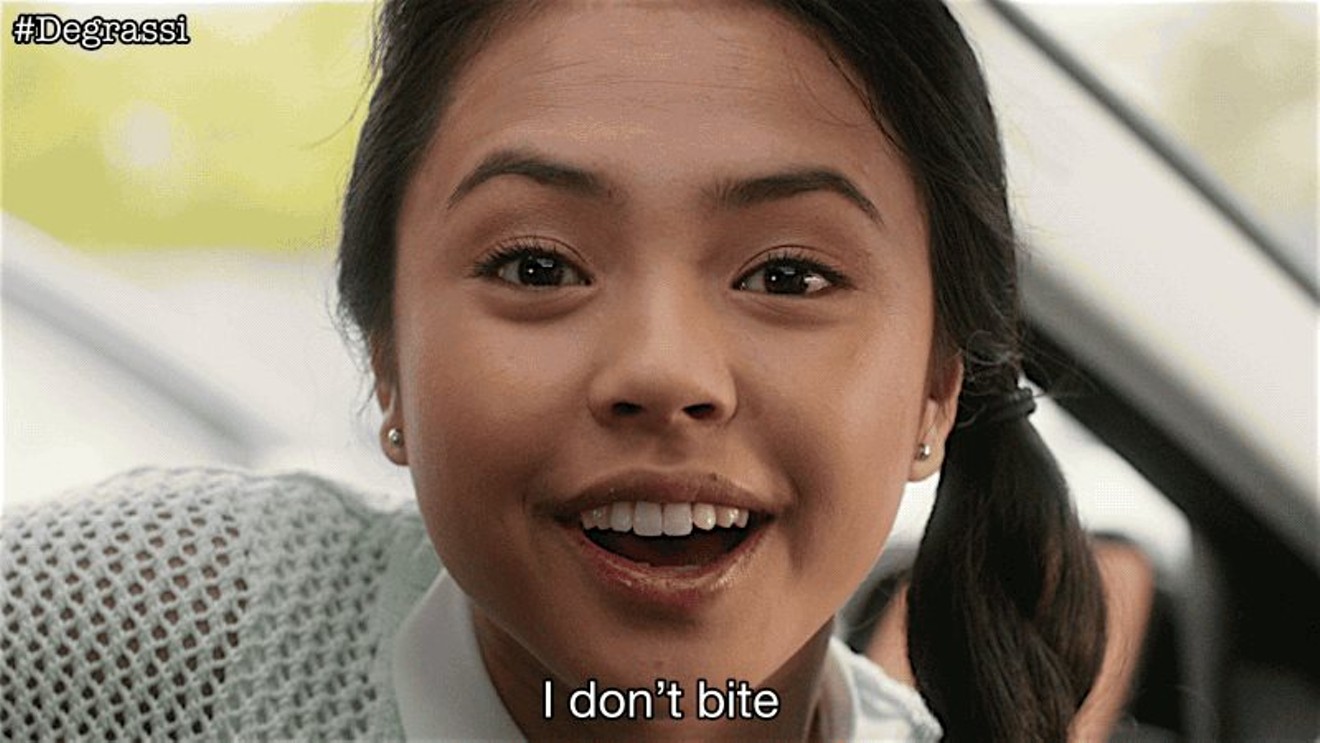 Crazy girl or crazy misunderstood? F2N
Every week, we're recapping season 3 of Degrassi: Next Class. Be the best! The best that you can be.

Life goes on for another episode of Degrassi: Next Class. After spending the season-three première revealing the fates of those involved in the bus crash that ended season two, it was business as usual back at school. That is, except in the case of Esme, who wasn't too eager to get back to the grind. Well, maybe, a different kind of grind, if you catch our drift. She and Zig were hot and heavy all summer and she wasn't going to let something pesky like class get in the way. Instead, she begs him to play hooky, enticing him with a visit ... ahem ... down under, in the parking lot in broad daylight.

When Zig finally goes inside, he tracks down Tiny to get the notes from the class he missed. It turns out, he also missed a pop quiz thanks to his rendezvous. Jonah, Frankie, and Shay walk up, grilling him on sacrificing his education to be with Esme. She's a well-known crazy girl, and they ask him to seriously consider what kind of girl is okay with getting busy in public like that. If she's doing it now, surely she's done it before. It's quite the double standard, a slut-shaming that's been projected onto many strong Degrassi girls in the past (Paige, Ali, Bianca, Alex, Zoë, et cetera).

After school, Zig is cramming for the quiz that Coach Armstrong is thankfully letting him make up. When Esme tries once again to distract him, he mentions that Tiny and the gang suggested they cool it for the sake of his grades. She begrudgingly surrenders, but also offers to help him with his math. They spend the next few hours going over equations. (We couldn't even tell you what they were about; that's how little you use math in the future, kids!)

When Zig hands his phone off to her, she happens to see a group text with Jonah and Tiny, wondering if they should "get her an extra big Slurpee because she's thirsty" and asking if they are "hanging out with Easy Esme again?" OUCH. What's worse was Zig's response of, "as long as I don't wife her, what's wrong with some extra third base action?" Really, Zig? She causes a massive scene in the hallway, accusing him of calling her a slut (he was) and throwing herself at a helpless Winston. As soon as a teacher walks up, she hightails it out the door.

After school, Zig finds Esme to show her his passing exam grade and apologizes to her for what he said. She says that she doesn't care what other people think, that his opinion is the only one that mattered. However, she worries about what he'll think if he hears darker stories about her. Like the fact that she's been in and out of therapy since she found her mom after a suicide attempt. When her mom succumbed to her injuries, her dad continued to blame her. Ding, ding, ding! That's why she was indeed the one who shut down Miles' hospital posts and why she flipped in class. Miles' lashing out with "just because everyone leaves you doesn't mean Tristan will leave me," takes on an even harsher light, given that he probably already knew this about her, his ex-girlfriend. Zig shares his story of being wrapped up in a gang and living in a group home. Um, okay, that's cool and all Zig, but can you just let Esme have this one? This seems like just the tip of the iceberg when it comes to uncovering her many layers.

Maya and the Infinite Sadness
F2N
We get our first glimpse at Maya, who was recognized several times last episode for being totally M.I.A. at the beginning of school. We know she survived the crash, but not unscathed. She broke both her wrists, a fact we later find out might affect her music career. In addition, she's unable to get out of bed, hitting snooze on her alarm clock and ignoring texts from worried friends. Her mom finally forces her out of the house and out to school, since she's already missed a full week of her senior year.

The moment she arrives, she's inundated with homework, as well as Grace and Jonah needing her to weigh in on new material for their band. They've been mega-inspired by the accident, integrating crash and heart monitor sounds and working toward an entire rock opera on the subject. A shell-shocked Maya is clearly not crazy about the idea, but promises them lyrics by the end of the day anyway. She toils away, unable to put her experience into words and eventually throwing her phone across the room.

After school, she decides to see a counselor, her first visit since last spring. They decide to put pen to paper and make a list of her anxieties. When it comes down to it, they aren't that scary, and the most exciting endeavor should be deciding what university to go to next year. After missing band practice, Grace and Jonah agree to let her take a night off to get her focus back. She draws a bath and thumbs through college brochures, still looking like a deer in headlights. She suddenly holds her breath and puts her head under water, staying there a while. A long while. Too long. She finally comes up for air and cracks a bit of a smile. It's unnerving, considering the way she lost her boyfriend Cam to suicide in season 12, and how vulnerable she's always been. Add in PTSD, and we likely have a wild ride ahead with Miss Matlin.

All the women, who are independent, throw your hands up at me.
F2N
Elsewhere on campus, the nerd herd (Baaz, Vijay, Hunter, and Yael) is meeting to discuss their vlog, All Inclusive News and Reviews. In season one, they were accused of being anti-feminist because the games they reviewed and played in tournaments were sexist. Even after re-branding, their viewership is 90 percent male, so they're still having a hard time reaching the ladies. Baaz tells Yael that she needs to split her time from just game reviews and include a fashion and beauty segment as well to drive a female audience. This doesn't sit well with her, but knowing that might be the case, Baaz brings in Lola as a consultant.

Lola gives Yael a makeup tutorial and preps her to leading a how-to for nail art in her next post. She begrudgingly goes along with it, even with the free makeover. She sets up and starts filming, only to immediately fudge the design on the first nail. She loses it, going off on a tangent about girls who are interested in this kind of stuff, and how they must be stupid to invest so much time into it. Despite their "all-inclusive" mantra, she posts this very non-inclusive message up on the channel.

Later that day, Baaz's head is spinning because she posted it and the comment section is blowing up with people offended by her stance. She even gets the cold shoulder from Lola and Frankie in class. When Yael tries to argue that beauty standards are just the patriarchy oppressing them (ugh) the girls explain that they do it for themselves and no one else. The message finally gets to Yael, who decides that while she still doesn't want to do these kinds of segments, they should have someone who can really speak to the subject. She suggests that Lola join the team and the boys enthusiastically agree. In fact, almost too enthusiastically, especially her boyfriend, Hunter. Based on the look on her face, we can count on that coming up again this season for sure.