Degrassi: Next Class Recap: Every Move You Make 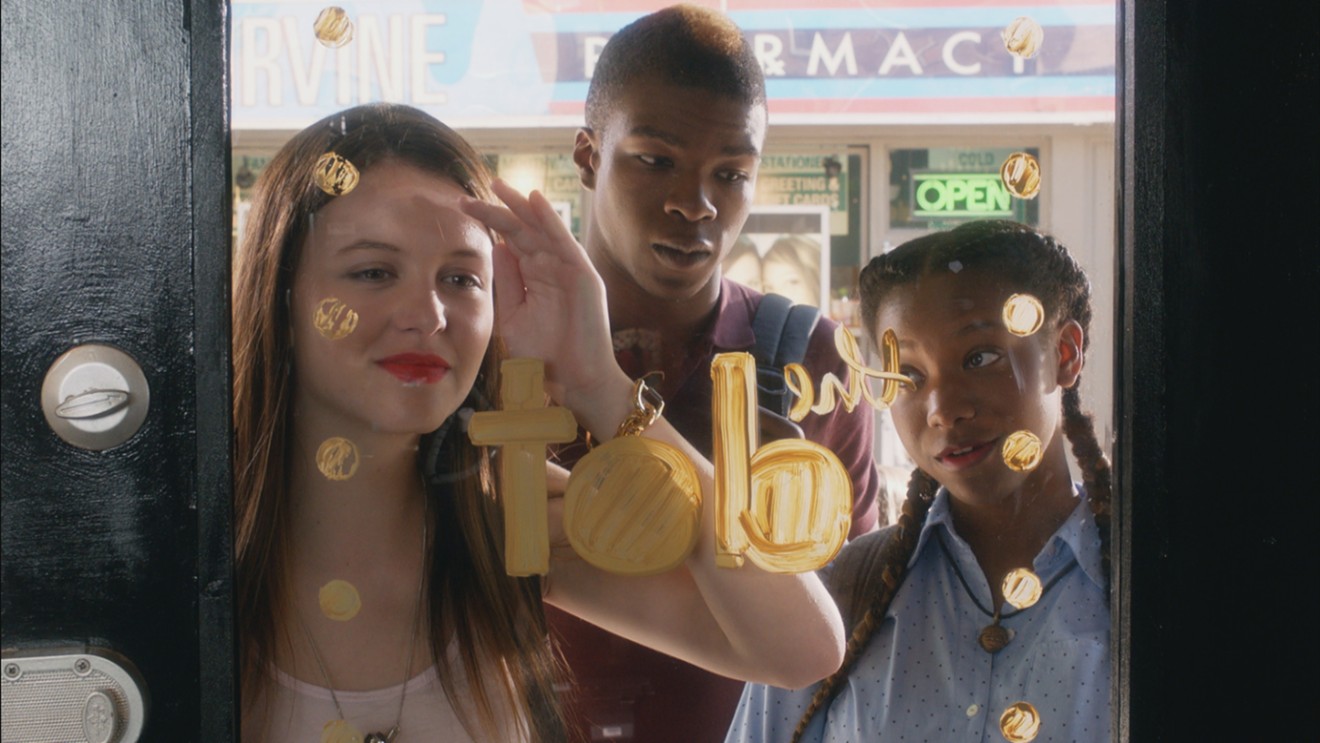 Every move you make, I’ll be watching you. DHX Media, Ltd. 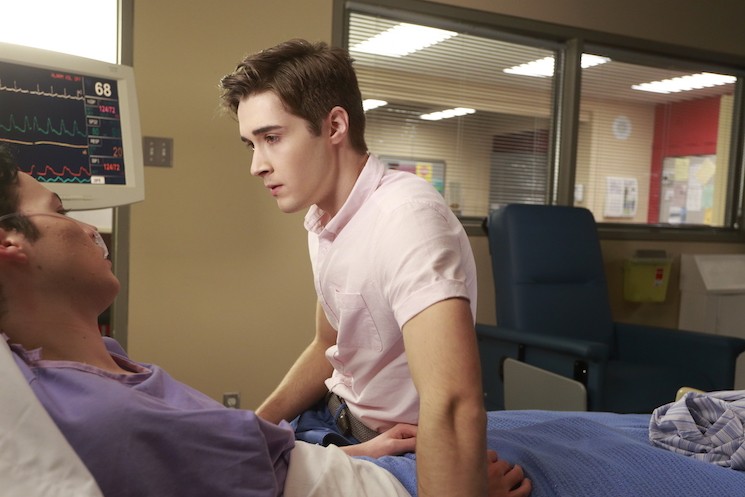 A miracle means Miles has some esplainin' to do.
DHX Media, Ltd.
Every week, we're recapping season three of Degrassi: Next Class. Every move you make, Frankie's watching you.

School is back in session for episode six, which takes place almost entirely on campus after last episode's detour to the Hollingsworth house. A lot happened: Jonah and Frankie got in a fight over (lack of) sex, Shay accused Tiny of being a player, and Lola and Miles finally (but not fortunately) hooked up. Talk about some heavy stuff for these marquee couples to experience over the course of one night.

In typically backwards Miles fashion, this chain of events has only propelled him. Amidst their hanky panky, he offered Lola the lead female role in his play. It makes sense, since the character — a girl who helps a boy through his boyfriend's coma — is based on her. Although he denies hooking up with her, fellow playwrights Jonah and Grace are understandably concerned, because the implosion of a "showmance" could most certainly derail the entire production.

Deep down, Miles understands this. He corners Lola in the hallway, telling her that they can't hook up anymore. She understands, as long as they can still talk and text. He agrees, and they continue sending each other Oomfchat messages during class. However, as he's sending one, he gets a text from Tristan's mom to call him ASAP. He grabs his stuff and heads to the hospital.

There, he finds Tristan's mom, who tells her she wishes he had "been there when it happened." In Degrassi world, this has us fearing the worst, but it's actually good news! After three months, TRISTAN IS AWAKE! However, he's still not able to communicate. After trying to power through a rehearsal with Lola-lita, he returns to the hospital to confess his sins. He tells Tristan that he cheated, after which he begins to gurgle and twitch. His mom comes in and explains that this is a good sign, but all-in-all, he's not going to be aware of his surroundings. This possibly means that he didn't understand what Miles confessed at all.

At school, Miles reads up on traumatic brain injuries and gets pummeled by the reality that Tris might never be the same. When Maya comes to console him, he laments that he doesn't want to be his boyfriend's babysitter his whole life. "What should I do?" he asks. "You could kill yourself," says Maya, blankly.

They both chuckle a bit, but HOLY COW, MAYA. We know she's heading down a dark path, but either the writers are laying it on thick, or she's really crying out for help.

She does give him at least one useful bit of advice, which is to "find some okayness in your life." That encourages him to talk to Lola, who had already decided to quit the play. He tells her he doesn't trust anyone else to play Hope, and they agree to work together. All is well (or so we think — wait 'til you get to the end). Finally, a win for Madame President.
DHX Media, Ltd.
Madame President Zoë Rivas has been on a mission to get the attention of Syrian student Rasha since episode one. She's involved her in student council initiatives and memorized her rehearsal schedule (under the guise of having a school-wide calendar as student council Pres). After nabbing her as a lab partner, she notices the glare of ex-boyfriend Winston nearby. He begs her to switch lab partners, as he's interested in getting to know Rasha, too. Zoë declares with full confidence that Rasha is gay, although she's never publicly said it. Winston disagrees, and suggest they go to social media for the answer.

The two stalk her FaceRange profile, but most of the captions and conversations are in Arabic. They notice a photo of her with another girl and the caption "7bb" which is shorthand for "Habibi", which means "my love" or "sweetheart." Still unsure, Zoë flags down Goldi and asks if there are any gay Muslims. Goldi explains that while there are parts of the Qur'an open for interpretation, homosexuality is not one of them. To her, it's definitely a sin.

Discouraged, she turns to Grace, begging her to trade lab partners so she doesn't have to face Rasha. In her very Grace way, she tells her to grow a pair and just ask Rasha out. There are more than a billion Muslims in the world; they can't all be straight. In order to be totally sure, Zoë tells Rasha that Winston wants to get coffee with her. She accepts, although later admits that she didn't know that "getting coffee" meant "a date" in their culture. She asks if the times when she and Zoë got coffee were dates, and Zoë dances around the question. "Too bad," Rasha says, slyly. "Because I like you."

+1 for Zoë, who more than deserved this victory. 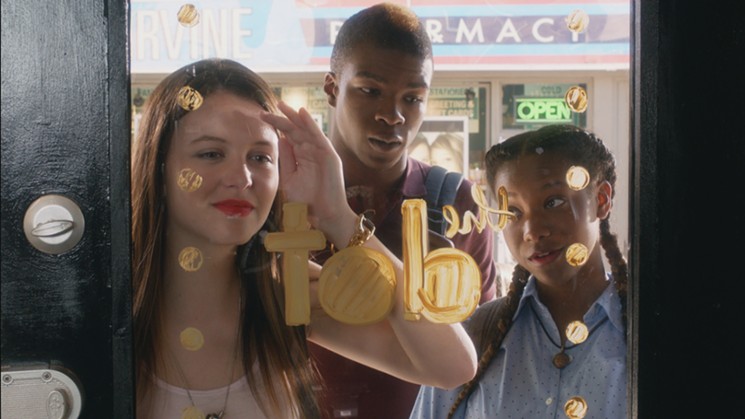 Every move you make, I’ll be watching you.
DHX Media, Ltd.
Frankie, on the other hand, is on a kamikaze mission after her fall-out with Jonah. They technically agreed to "space," but in the digital age, what does that mean anymore? Apparently to Frankie, it means dressing in knee-high boots and hot pants, taking selfies in hopes that it will get the attention of her beloved and he will text her back.

After crashing Tiny and Shay's Boggle date after school (was that a product placement or do teens really do that?) she spends most of the game checking her phone. Jonah finally posts a Hastygram pic, where he tags himself down the street at the Dot. She abruptly grabs Shay and Tiny and drags them there to see what's going on. She peers in and only sees Jonah there, script for the musical in hand. Relieved, she decides there's no harm in saying "hello." That is, until another girl walks up and sits down next to him. Frankie charges in, demanding to know if this girl is why she's been avoiding her.

It turns out, she's a friend from Narcotics Anonymous, and boy, is this awkward.

The next day, Frankie shows up with a brand new guitar in hand to apologize. She's frustrated that she didn't know that Jonah was in NA. He says that it's not something he goes around bragging about. When she prods him more on why he's been M.I.A., he reminds her that she's the one who asked for space. Clearly, she had no idea what that would entail, it was mostly just that she was hurt that he wouldn't have sex with her. It's obvious that she doesn't know what she wants, and after all the jealousy issues, Jonah doesn't know how to prove that he cares about her.

Before class, she huddles with Lola and Shay and asks them flat out, "Am I a crazy girlfriend?" They go silent, which means that's obviously a yes. "You lose yourself when you're in a relationship," Shay explains. She gets clingy and jealous and quite frankly, being with Jonah is just stressing Frankie out. Frankie knows that they're right, but she also knows she loves him, she just doesn't want to be "that girl." "If you're in love with the right person, you wouldn't be that girl," Shay replies. She may need to practice what she preaches, but Shay is usually the voice of reason.

After school, Frankie confronts Jonah, and gives him the dreaded "we need a break." She has a lot to figure out about herself and while we're not holding our breath for a reconciliation, we are holding out for a Frankie revolution. 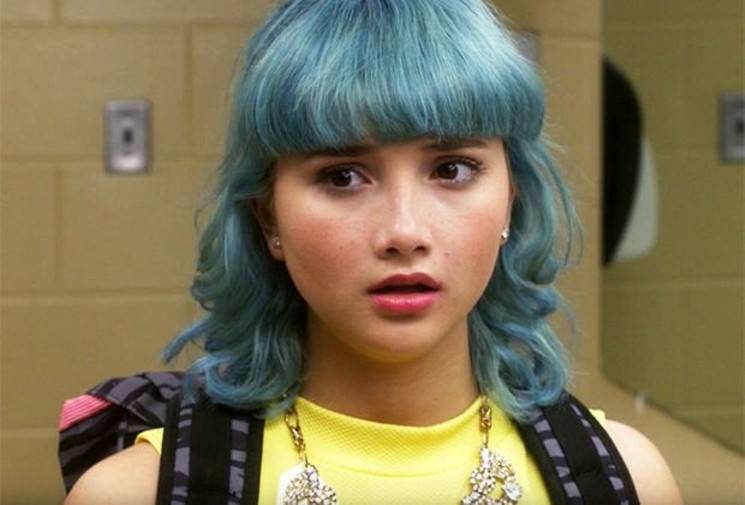 In the last scene, Frankie is throwing away all the girly things she feels like she doesn't need now that she and Jonah are on a break. This includes her birth control packet, which she got even though they never had sex. Lola laughs that it's a good thing, because she sees that Frankie took them "wrong." You take them "light to dark, like a sunset," she explains. Nope, it's the opposite way, Lola, you're the one who was doing it wrong. Concerned at first, Frankie laughs it off. It's not a big deal since Lola hasn't had sex anyway, right?