Zoë learns a lesson after mistaking her mother's silence for acceptance. DHX Media Ltd.
Every week, we're recapping season three of Degrassi: Next Class. It's a nice day for a drama-filled wedding.

In the penultimate episode of this season, several Next Class storylines that have been ongoing during the season come to a head in a big way. We start with Queen Bee Zoë, who is finally happy now that she's settled down with her girlfriend, Rasha. In fact, even her mother walked in on them kissing and has yet to mention it or flinch at Zoë referring to her "girlfriend."

This gives her the confidence to ask her mom for a plus-one to her upcoming wedding. Her mom initially blames the venue capacity rules, but as Zoë presses harder, she admits it's because she thinks this whole thing is a "phase." She mentions that Zoë has nice hair and wears feminine clothing, so clearly she's just confused, right? The minute she meets Mr. Right, her mom contends, she'll remember that she's definitely not gay.

Degrassi has seen several gay characters come through since Marco's milestone arc in season two of The Next Generation. They've all had different ranges of conflict, from extreme to none at all, but this is as in-depth as we've gone in a while, with a truly palpable parental divide. 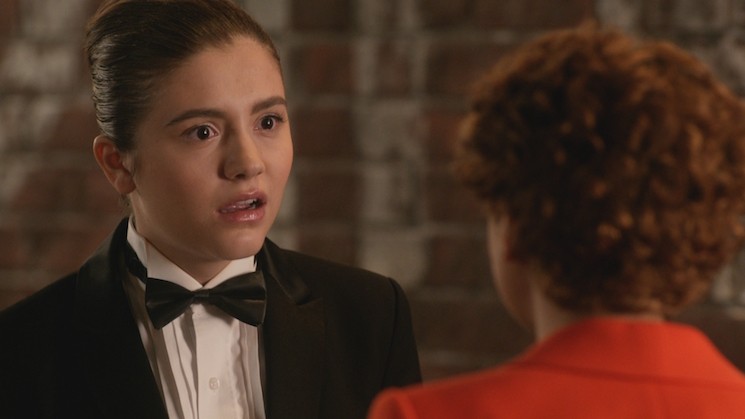 Zoë reveals her true self in the most public way: at her mother's wedding.
DHX Media Ltd.
On the day of the wedding, Zoë is running around doing last-minute errands in her hideously pink and generously ruffled maid of honor dress. She passes by a cool and casual lesbian couple, who give her a judgmental look. She turns away toward a store window, where she sees a tuxedo displayed.

Staring back at her own reflection, she decides she's tired of people assuming she's not gay because of how she looks.

Rasha shows up to the wedding and sees Zoë, dressed in the tux with her hair slicked back. Her mom arrives and they go to greet her. She's clearly stunned at both the tux and Rasha's presence, but tells her to take a seat and Zoë to get the bouquet. Once again, her silence is understood as acceptance.

After the ceremony, the guests are enjoying the reception, including Rasha and Zoë who begin dancing and kissing. Her mom sees this and suddenly rushes over to tell them to stop. Zoë defiantly says "no," and her mom reminds her that Rasha was never welcome in the first place. Her new husband suggests that Zoë should leave — and they do.

Outside, Rasha looks furious. She had no idea that she wasn't invited and wouldn't have come if she had. Back in Syria, she was invited to a party at her aunt's house, which was a trap for the police to arrest her for being gay. To her, this feels like the same thing.

Now totally alone with nowhere to go, Zoë turns to her ex-girlfriend Grace, who had been DJing at the wedding and saw the whole thing. She invites her to stay over as long as she needs. It's possible this won't be resolved during the finale, but we can only hope that it might because Zoë has spent long enough waiting for her turn.

It's the end of a bumpy road for Frankie and Jonah.
DHX Media Ltd.
In a semi-adjacent storyline, Frankie is still mulling over her "break" with Jonah after all of their trust issues at the beginning of the season. She spills all of this to Hunter, who is also in murky waters with Yael after lying about getting a boner in front of Lola. Also, although it's not mentioned, Miles just found out he got Lola pregnant while his boyfriend was in a coma.

It's bad vibes all around for the Hollingsworths.

Frankie decides to get a book called Break Up or Break Through, which suggests the "C.A.T." method of coping. This includes giving a compliment, offering an apology, and re-establishing trust. Hunter isn't on board with this, instead opting to fight over Facerange messenger with Yael. He walks away with his browser open, a real rookie move for a so-called expert "hacker." Frankie decides to jump on and talk to Yael as Hunter, going so far as to say he loves her (which he has yet to actually say to her).

Once again, Frankie's heart is in the right place, but man, what a bonehead move.

Later on, Hunter storms in, clearly aware of what Frankie did. He grabs her phone and starts to text Jonah as her, including telling him that she loves him. They explain the situation to Miles, who is unabashedly Team Hunter on this one. She begs him to stop, but he sends the message. She panics, and finds out he's at the Rivas wedding DJing, so she rushes out the door in a fancy dress to explain herself.

When she arrives, she asks Jonah if he's seen his DMs lately. He hadn't, but now she has to fess up regardless. She explains it was Hunter, but he asks if she meant the "I love you" part. She says she does, and although they're a toxic couple (um, harsh much?) she wants to get back together. He gets pulled back to work, but says he'll call her later.

At home, she's pacing around, waiting for him to call. She bides her time by logging into his Facerange profile (which she still has the password for) and seeing if his inbox would give any clues. He sneaks in with a bouquet from the wedding and an apologetic tone. However, he sees the screen and realizes what she's doing. She tries to pass it off as doing it "for the relationship" but that was the last straw. His trust has been majorly violated, and now this is an official breakup, no gray area at all.

It's always Katie, Katie, Katie!
DHX Media Ltd.
After her meltdown last episode, Maya is seeking help at the doctor's office. She explains her hallucination of walking into traffic, citing WebMD (always a bad move) in her theory that she might have a tumor or some other explanation for her sudden personality change. The doctor agrees that something is wrong, but based on her loss of appetite, she concludes it's depression. This is something Maya has heard before and tried to treat, so why isn't it better? The doctor explains that it's a lifelong thing, but they know what they can do to fix it.

At home, Maya and her mom are reading through a book her therapist recommended. Maya is in complete denial, convinced that her mom is making all of it up just because she doesn't like the way Maya is. She gets increasingly more frustrated, eventually ripping the book away from her mom and throwing it against a mirror that was a family heirloom.

This is beyond anything we've seen from Maya previously, and her mom is understandably shaken.

Later on, we see Maya sulking down the stairs and hear her mom talking to someone in the kitchen. It turns out it's her older sister Katie(!) a classic Degrassi character from the last few seasons of The Next Generation. She also went through a bit of an identity crisis, going goth after a bad breakup, not to mention dealing with bulimia and substance abuse. Now, she's happy and healthy, playing soccer at Stanford. Her mom has called her home, unable to deal with this on her own.

Maya makes her way out the door, brushing off Katie's offer to join her on an errands run. She stops by the Dot to use their ATM and takes out what looks to be all of her savings. Esme catches her, asking if she's going on a trip. She replies with a request for Esme to take care of Zig, which is somewhat ominous.

She comes home and sets up a feast of popcorn and candy for her sister and mom. She's seemingly flipped a switch, and now wants to make up for "being a burden" to her family. They seem relieved, going so far as to wear the matching pajamas she bought all of them.

They finish up watching The Wizard of Oz, clearly a Matlin classic as they know all of the lines. She declares she's going upstairs to get ready for bed and goes to the bathroom. After staring at herself, wide-eyed in the mirror, she opens the cabinet and starts to make a cocktail of prescription pills her mom has for her multiple sclerosis. She puts them all in a container and shuts it quickly as Katie walks in. The sisters hug, the container of pills in her hand, and the screen goes black.

It's fairly common for someone who has been depressed but then decided to end their life to have a sudden burst of energy and openness. This is exactly what this looks like, given everything we've seen her go through this season.

We can only hope that Katie or anyone else who is left will see it and intervene.