Eight Things to Do This Week in Metro Phoenix

The weather is heating up, and so is the metro Phoenix events calendar. If you're looking for something to do over the next seven days, we've got suggestions, from a Beatles-themed concert to a classic arcade game convention.

If you never got to see The Beatles in concert, this is (kind of) your chance.
Matt Christine Photography

The Best of Abbey Road Live

It's been more than 50 years since the Beatles broke up, but interest in the Fab Four hasn't waned a bit. If you count yourself among the ranks of the Beatlemaniacs, we've got news: A big-budget tribute concert is coming to ASU Gammage in Tempe. RAIN — A Tribute to The Beatles will perform their show The Best of Abbey Road Live tonight, Wednesday, April 27, at 1200 South Forest Avenue.

RAIN, whose current members are Steve Landes, Paul Curatolo, Alastar McNeil, and Aaron Chiazza, will deliver the highlights of The Beatles' 1969 album as well as plenty of their earlier hits. The Associated Press called the group "the next best thing to seeing The Beatles." Tickets are available on the ASU Gammage website. Cost is $30 to $90. Jennifer Goldberg

Happy hours at bars, while awesome, are a dime a dozen. Happy hour at the aquarium? That's a fish of a different color. If you're 21 and over, you can head to Odysea Aquarium for its Fish & Sips event from 5 to 8 p.m. on Thursday, April 28.

Fish & Sips features food and drinks for purchase, plus live music, yard games, and access to the entire aquarium. You'll be able to touch stingrays, walk through the aquarium's Odysea Voyager, see surprise appearances by aquarium animals, and participate in a live Q&A with animal care specialists.

When it comes down to it, drag artistry and professional wrestling have more than a few things in common. Both involve a performance aspect and frequently star colorful, larger-than-life characters engaging in choreographed and frequently over-the-top antics. So an event like WrestleDrag, which will feature both performances by Valley drag queens and matches between local pro wrestlers, doesn’t seem like that unusual of an idea. The inaugural edition of the LGBTQ-friendly event will take place on Saturday, April 30, at 3104 West Thomas Road, Suite 1001. Six matches are scheduled, including Bodhi Young Prodigy battling Evan Daniels for the Arizona Wrestling Federation’s state championship and a tag-team contest between Morgan and Ricky Rayez versus Gin & Toxic. A half-dozen local drag artists will also perform, such as Beatrix Bella Rouge, Alexandra Armstrong, and Moxxi Strokes. Doors are at 6 p.m. and admission is $25. Proceeds will benefit the Phoenix Batatudes softball team. Benjamin Leatherman 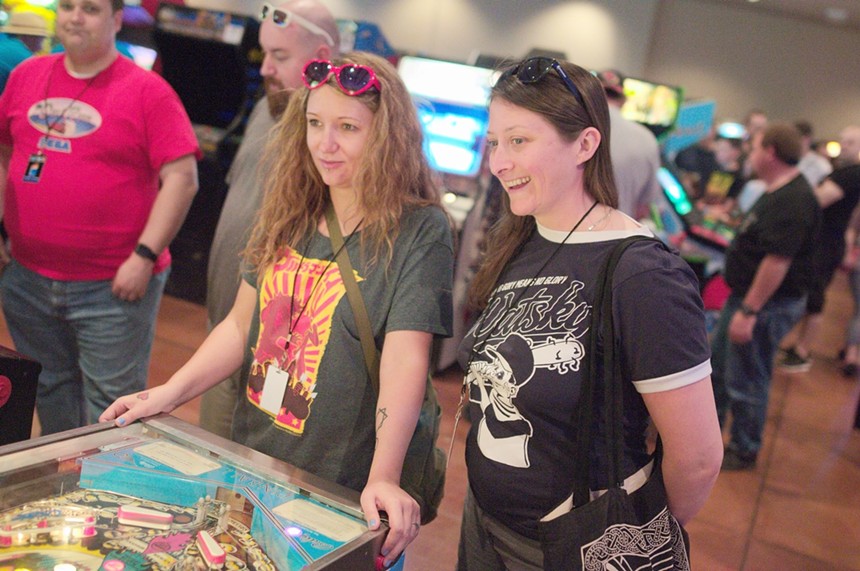 ZapCon is back.
Benjamin Leatherman

Like any frustrated gamer trying to beat the ultra-challenging Dragon’s Lair, the eighth edition of ZapCon took a few attempts to pull off. Delayed for two years because of COVID-19, organizers of the annual classic arcade and pinball game convention will finally press start on the event. Like its previous editions, this year’s ZapCon will transform the interior of the Mesa Convention Center, 263 North Center Street, into the Valley’s biggest old-school arcade from Saturday, April 30, to Sunday, May 1. Gamers can travel through a warp zone to the glory days of Pac-Man and Donkey Kong and get their hands on more than 200 vintage titles and coin-op classics. There will also be several pinball tournaments held throughout the weekend and a number of retro game consoles available for play. Doors open at 10 a.m. each day. Tickets are $35 for Saturday, $25 for Sunday, or $50 for the weekend. Children 3 to 12 will receive discount admission and kids under 3 are free. Benjamin Leatherman

You're running out of time to experience your favorite show.
Jennifer Goldberg

Almost 30 years after the show debuted, Friends is just as popular as ever, gaining a new generation of viewers. If you count yourself among the show's fans, be advised: You're running out of time to see The Friends Experience, the interactive exhibit that's set up shop in north Phoenix.

Inside, you'll learn about the development of the show, see memorabilia, and enjoy re-creations of the iconic sets, including Central Perk, Monica and Rachel's apartment, and the stairwell where Ross got his couch stuck ("PIVOT!"). The exhibit only runs through May 8, so check it out soon: it won't always be there for you. The Friends Experience is located at 10845 North Tatum Boulevard. Tickets are $30.50 to $37.50 plus fees. Visit The Friends Experience website for tickets and info. Jennifer Goldberg

Try your luck at Kobalt in central Phoenix.
Rocket000/Flickr

The fun gets going at 9:30 p.m., and it's free to play, although you need to be 21 or older to try your luck. Kobalt is located at 3110 North Central Avenue, #175. Visit the Kobalt website for more info. Jennifer Goldberg

Harkins Theatres' Tuesday Night Classics movie series continues on May 3 with La Bamba. The 1987 film stars Lou Diamond Phillips as Ritchie Valens, the young, up-and-coming Chicano singer who rose from field laborer to rock star before dying tragically at the age of 17 in the plane crash that also killed Buddy Holly and The Big Bopper. The film was a critical and commercial success and launched the career of Phillips.

Harkins' Tuesday Night Classics films are screened at all of the chain's locations at 7 p.m. Cost is $5. Visit the Harkins Theatres website for info and tickets. Jennifer Goldberg

Everyone's an expert in something right? Find out what your fellow Phoenicians are passionate about at 7 p.m. on Wednesday, May 4, at the 20th installment of Ignite Phoenix. Valley residents will give five-minute talks on a topic they're knowledgeable, and you won't know what the topics are unless you attend.

Ignite Phoenix will be held at Scottsdale Center for the Performing Arts, 7380 East Second Street, Scottsdale. Cost is $25. Call 480-499-8587 or visit the SCPA website for tickets and info. Jennifer Goldberg
KEEP PHOENIX NEW TIMES FREE... Since we started Phoenix New Times, it has been defined as the free, independent voice of Phoenix, and we'd like to keep it that way. With local media under siege, it's more important than ever for us to rally support behind funding our local journalism. You can help by participating in our "I Support" program, allowing us to keep offering readers access to our incisive coverage of local news, food and culture with no paywalls.
Make a one-time donation today for as little as $1.