Sales From the Darkside: Chandler’s Terror Trader Is a Little Shop of Horrors Think back if you can. Do you remember actually shopping? Traveling to your favorite record store or perhaps a secondhand boutique was actually a fun activity as you had no idea what you might find. What’s more is that you would actually get to know folks working in your favorite shop and form a relationship with the owner. Unfortunately nowadays, the mom-and-pop concepts and the treasure hunting experience have virtually disappeared with our ability to click a mouse. We can easily find that specialty item that appeals to our most geeky whim on eBay, Amazon, or Etsy.

Well, if you’re a fan of the horror movie genre, you’re in luck. Now open for a tad less than a year, Chandler’s Terror Trader caters to its customers by offering a well-rounded selection of creepy collectibles, maniacal masks, and vintage videos. Within this Boo-tique, you can quickly find everything you’ll need to tap into your inner Michael, Freddy, or Jason. What’s that, you say? You want to order online? Nope. Terror Trader does not engage in e-commerce. This store wants to be your final destination in Arizona to find weird wares.

Store owner Jason Swarr (yes, his name is actually Jason) proudly says, “We’ve actually got people coming here from as far as Texas.” Seeing as he runs the venture with his wife Gina and has an 18-year-old daughter who goes simply by “Red,” Terror Trader is truly a mom-and-pop shop that opened specifically and purposefully on October 1, 2021. This would also include the mindfulness of setting up shop across from a Zia Records, one of those few remaining places that is fun to browse. When asked if Gina is also a horror enthusiast, Swarr exclaims emphatically, “No. (laughs) Our house is quite normal and there’s no man cave with a bunch of eccentricities. This store here is pretty much like my man cave.”

Terror Trader includes Jason Swarr's video store tribute.
Mr. P-body
Indeed. Swarr is like a kid in a Candyman store with a video store tribute to Video Barn, his childhood fave, along with a theme park “Dante’s Inferno” car from Coney Island, and a plethora of gory gear such as a viewing coffin, 1900s mortuary table, a straitjacket, and an electroshock therapy machine. Oops. Did you drive by and see their sign in the strip mall, thinking this might be another pop-up Spirit-type of Halloween costume shop? Nope. You won’t find a cowboy costume or sexy French maid outfits here. Actually, at Terror Trader, you may encounter real supernatural spirits. Swarr was more than happy to express his views on the paranormal.

“Over here on the wall is my collection of vintage Ouija boards, but I don’t play around with them at all," he says. "I was a skeptic for a long time until I’d seen my own surveillance cameras capturing footage of items flying off the shelves with not a soul standing anywhere nearby.”

Here in the material world, things are indeed flying off the shelves — Terror Trader sales are very good and it certainly helps that horror is in vogue. It’s perfect timing as the horror genre that was practically ignored when it comes to critical merit is now garnering higher percentages with movie review aggregates such as Rotten Tomatoes. Production companies like A24 and Blumhouse are constantly grinding out new horror films, and both studios have produced films that have earned Oscars.

Swarr is less impressed, reminiscing, “The '80s was the golden era of horror. I mean, I’m not really a big fan of found footage, for example — I’m pretty much a slasher guy. And the modern horrors don’t really have the iconic characters — Jason, Michael Myers, and Pinhead. Without them you just don’t really have a base for the merchandise. It’s kinda lost with no masks and outfits.” And like a movie character, he reveals his own backstory. Swarr recalls, “I was an 11-year-old kid and my brother rented The Texas Chainsaw Massacre for me at the local Video Barn. I’ve been into horror ever since, and my first 3D movie I saw at a drive-in, Friday the 13th Part III, just blew my mind.” 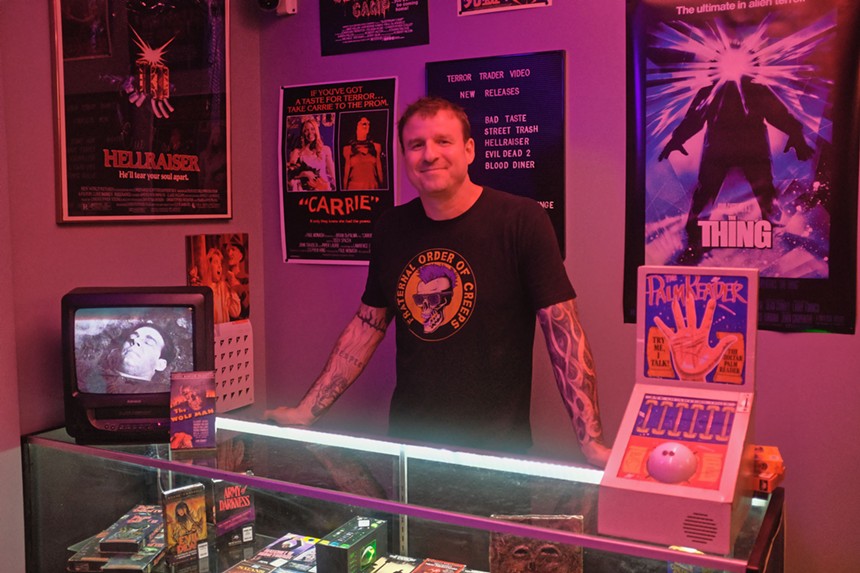 Store owner Jason Swarr opened Terror Trader on October 1, 2021, and sales have been good, particularly since horror is in vogue.
Mr. P-body
He’s not the only enthusiast out there. As a matter of fact, Terror Trader operates as a trove full of independent dealers. There’s something for everyone, ranging from books on true crime, coyote hearts, and contemporary Stranger Things merch. Need a wastebasket with The Shining logo? They’ve got it. A “bloody” teddy bear? Check. A giant killer klown from outer space? Yep, and in many different forms.

Swarr explains, “I wasn’t able to set up a booth in other treasure collectives due to the waiting list, so I decided to open my own. They [vendors] rent spaces here and now I’ve actually got a waiting list of artists that want to display their work.”

They actually get their chance because once a month. Terror Trader hosts an event entitled “Sales From the Darkside,” a gathering of 55-plus vendors, artists, and sculptors in the vacant 11,000-square-foot space next door. With food trucks, spook houses, and cosplay contests, the well-attended event on August 6 was a full 12 hours. In addition to all that, the shop has its own all platform podcast called Creepcast, a weekly show with daily “crypt cuts” (merchandise arrivals and their retail musings) and monthly guests that include professionals in the horror movie genre.

So what does AZ’s only year-round horror marketplace do for Halloween? “That’s our Super Bowl,” Swarr says with a laugh. “We’re open all 31 days of October and we’ll be teaming up with a local haunted house attraction called Sanctum of Horror. On October 13, we’ll be doing an exclusive visit for Terror Trader customers only, starting at the store and then shuttling over to Sanctum.”

Should you come and visit, make sure to get a Polaroid picture taken so it can be added to the store’s “Wall of Souls.” This is just another one of the personal touches that can only happen within the mom-and-pop shopping experience. Another? Interesting discussions about concepts such as “Gateway horror movies,” flicks such as Gremlins, Halloween, and Poltergeist. Swarr's passion seems destined to be passed on to his daughter, whom he is grooming for the genre with a gentle introduction to movies like those named above.

“There are so many subgenres in horror that I’m nearly envious of my daughter, who gets to watch thousands of films for the first time," Swarr says. "The ones I’ve already seen. The ones that got me to where I am today and doing what I’m doing now. I smile everyday I wake up.”

Terror Trader: 941 West Elliot Road Suite 3; Chandler 85225; 480-590-3481; open noon to 8 p.m. Wednesday through Sunday.
KEEP PHOENIX NEW TIMES FREE... Since we started Phoenix New Times, it has been defined as the free, independent voice of Phoenix, and we'd like to keep it that way. With local media under siege, it's more important than ever for us to rally support behind funding our local journalism. You can help by participating in our "I Support" program, allowing us to keep offering readers access to our incisive coverage of local news, food and culture with no paywalls.
Make a one-time donation today for as little as $1.
Mr. P-Body