Mackenzie Collier and her girlfriend, Shannon, have put a year of work into their Phoenix home to completely transform it. Evie Carpenter

Mackenzie Collier uses three words to describe the way her 1954 Phoenix home looked when she and her girlfriend Shannon moved into it last February: “Pizza Hut disco.”

The walls of this midcentury home just south of Arcadia were painted red (with coral sponged accents), peachy-gold, and navy blue. The floor was covered in 2,000 square feet of cracked Saltillo tile. Most of the windows were covered with heavy curtains, which were so plentiful, they filled a dumpster when Collier removed them. It definitely was not Collier’s style.

“It was just kind of aggressive before,” Collier says. 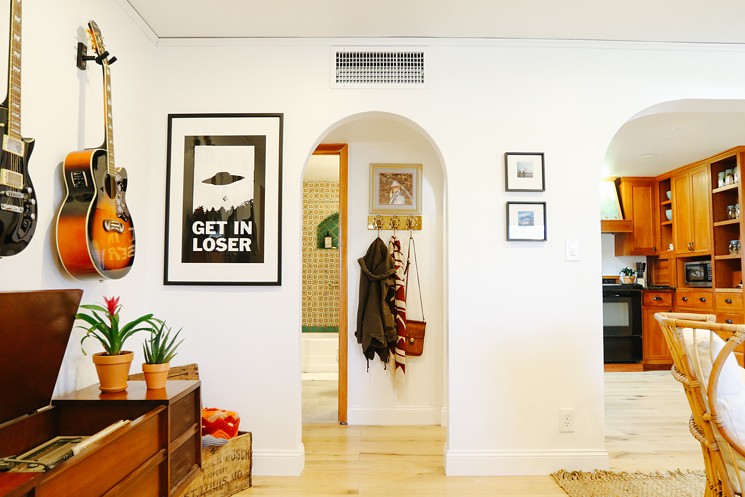 The couple bought the home in February 2016. For the first month, they lived in the garage while doing all the major renovations and having dance parties in the empty spaces with their friends.

“There were plenty of dancing floors,” Collier says.

Collier owns Mackenzie Collier Interiors, an interior design firm that specializes in full-service design as well as DIY design plans. So she had plenty of industry friends to lend a hand or two.

The Hamilton sofa from West Elm is one piece that Collier often recommends for her clients.
Evie Carpenter
While the home is in the middle of the city, there’s a natural feel to it. Plants hang from the ceilings and sprout from pots on the floor, while wooden accents and souvenirs from the couple’s many trips are displayed around the house.

“We love hiking and camping,” Collier says, adding in reference to the master bedroom, “We were going for a campsite.”

A giant fireplace fills one of the walls in the master bedroom. Sticks, stones, and branches from several different national parks the couple has visited hang above the bed. And from sitting at the vanity, you can see Camelback Mountain.

The fire in the master bedroom is supposed to channel a campfire.
Evie Carpenter
Next to these natural touches are heirlooms from Collier’s past, including books, furniture, pieces of art, and even a pair of glasses handed down from her parents and grandparents.

Repeated horse imagery throughout the house stems from Collier’s maternal grandfather’s and her own love of horses. (She even has a horse at her brother’s house in Cave Creek.) The bookshelves in the master bedroom are filled with books from her paternal grandfather. The wooden trunk in the guest bedroom came over from Italy with her great-grandparents.

Many of the other pieces that fill Collier’s home are from people she doesn't know. 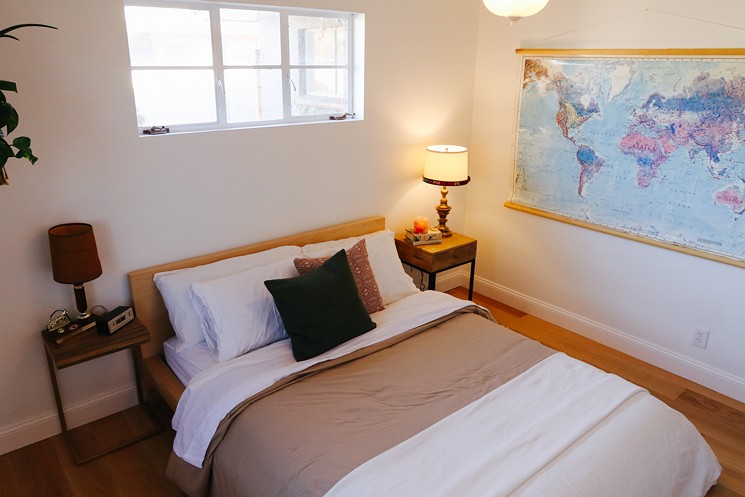 Just like the couple themselves, the map in the guest bedroom is from Michigan.
Evie Carpenter
A map covering a wall in the guest room is special because, like Collier and Shannon, it’s from Michigan. The tulip table was a dream item for Collier that she found on Craigslist. And the yellow couch in the back living room, also found on Craigslist, was made the same year the house was built.

“Everything is meaningful in some way,” Collier says. “I love imagining the story behind the pieces.”

This echoes one of Collier’s general design philosophies that she learned from an etymology class at Michigan State: “as little waste as possible, as vintage as possible.”

There are still whispers of the original home, too, like the tile Collier decided to keep in the guest bathroom, and touches from the people who loved this home previously.

While Collier doesn’t know much about the family whom they bought the house from, she does know the previous owners. They were Dana and Mark Hummels, a Phoenix lawyer who was fatally shot with a client in his office in 2013.

The cabinets in the kitchen were created by Dana Hummels.
Evie Carpenter
While living in the house, the Hummelses added a cast-iron tub to the master bath, which required the bathroom wall to be torn down and built again once the tub was installed.

And the vanity in the master, the bookshelf in the dining room, and all the cabinets in the kitchen were designed and built by Dana.

But Collier and Shannon’s favorite wall in the house is actually in the garage. It’s where they hang all their hiking and camping gear.

The gear wall in the garage is the couple's pride and joy.
Evie Carpenter
“The gear wall makes me so happy,” Collier gushes.

The garage is actually what sold Shannon on the house. Collier says that Shannon didn’t think the house was salvageable until she saw the large garage that would be big enough for her to work on her Jeep.

Ultimately, this house met all three of the couple’s criteria for the perfect house: “a pool, a garage, and charm,” Collier says.

But after walking through the completely transformed home, it’s clear the couple has added the charm to this house.