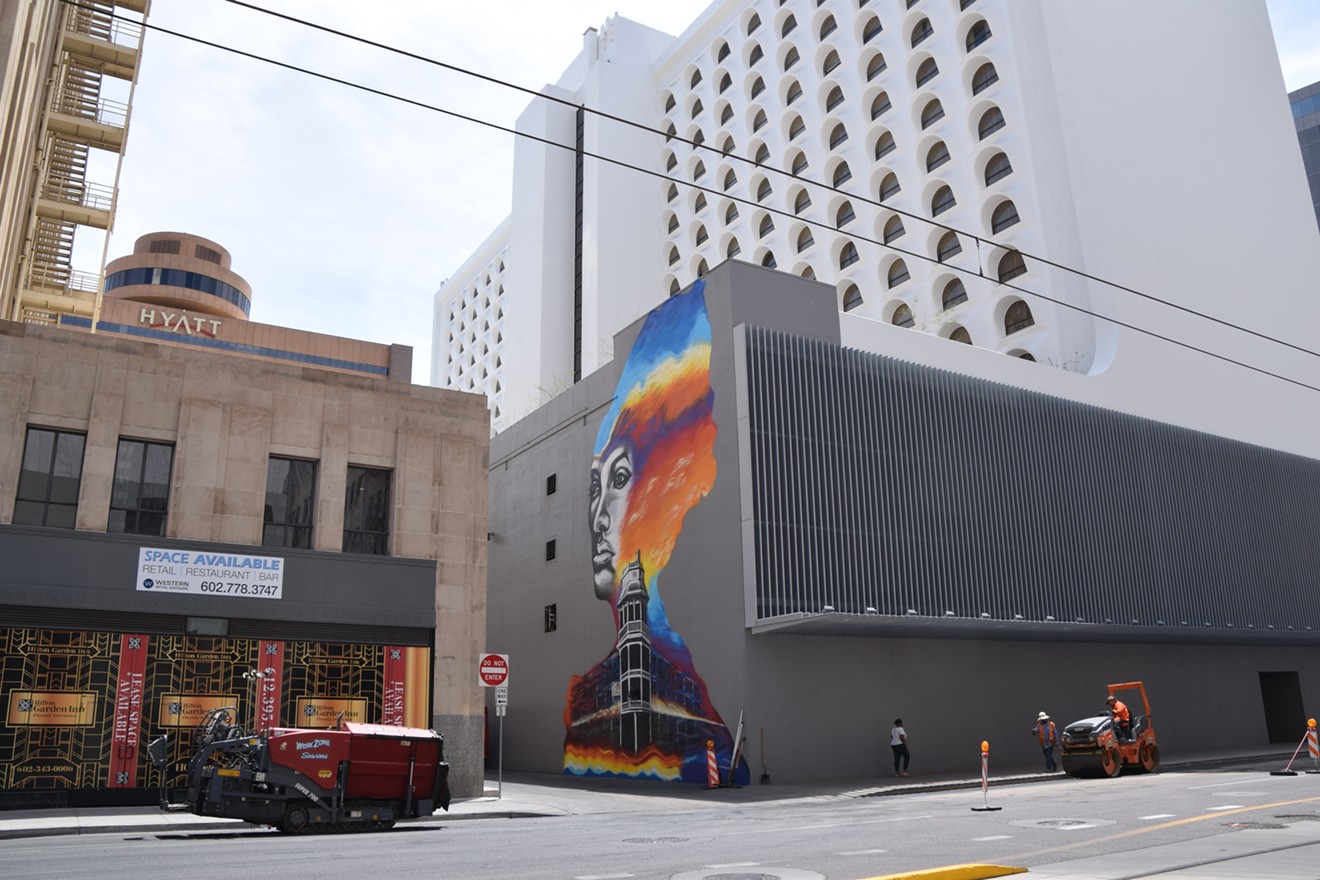 Malinda mural by Hugo Medina and Darrin Armijo-Wardle at the Renaissance Hotel in downtown Phoenix. Lynn Trimble
Even Phoenix alleyways have stories to tell. One recently inspired a new mural downtown. Titled Malinda, it’s painted on the north-facing exterior wall for the Renaissance Hotel, in an alley between Central Avenue and First Street.

That's where Hotel Adams was built in 1896, but destroyed by a fire in 1910. According to a newspaper article from the Arizona Republican from October 29, 1910, a woman named Malinda Curtis, who loved to drink and socialize, lived in a nearby alley just off North First Street. Local lore says she was the madam of a brothel for a time.

But another article, with the "Malinda" spelling, surfaced later. That's the spelling they went with for the mural. Local newspaper coverage of Malinda's death.
Courtesy of Renaissance Phoenix Hotel
Phoenix artists Hugo Medina and Darrin Armijo-Wardle started the mural on Friday, May 26, and finished on Sunday, May 28. It measures 70 feet high and 50 feet wide. It’s the image of a woman's face, set atop a rendition of the former Hotel Adams, with blazing hair painted in colors of the Arizona sunset.

"We didn't have pictures of Malinda, but we knew she was an African-American woman," Medina says. "We searched images of madams from that time period, then painted a composite portrait to represent Malinda." Frankly, it's not particularly flattering. And it could easily be mistaken for the portrait of a man.

Both artists worked on every part of the mural, Medina says. Even so, the face reflects more of Medina's monochromatic style, and it lacks some of the sweetness present in several of Armijo-Wardle's other portraits. Medina's real gift is creating hands, like those that grace a mural he painted on the east-facing exterior wall of Modified Arts on Roosevelt Street in May.

“We wanted to honor the history of the place,” Medina says of making the mural. Several years ago, he painted a small globe on a nearby wall in the same alley. But that was painted over a couple of months ago during hotel renovations, Medina says.

The new mural was commissioned by Downtown Phoenix Partnership, a business improvement district (or BID, for short) founded in 1990 that taxes property owners in the downtown core to fund economic development and other improvements to the 90-square-block area the BID covers.

Malinda is the first project funded through a new Downtown Phoenix Partnership arts initiative, says R.J. Price, vice president of marketing, communications and events for the group. They've set aside $40,000 for the initiative, he says, and more than 80 percent of the mural was paid for with money collected through the BID. (Medina is being paid for several projects, so Price says he can't put a number on the amount put towards Malinda.)

In any event, Malinda signals the group's interest in bringing works by local artists to more downtown spaces.

A formal dedication takes place by the mural at 7 p.m. on Friday, June 16. Following outdoor remarks, the ceremony will move inside to Melinda's Alley, where "hip historian" Marshall Shore will give a free talk about Malinda's life and times. Get details on the event Facebook page.