Hamilton company during the Hamilton national tour. Joan Marcus
A man quietly strolls onto the stage at ASU Gammage. Dressed in breeches and a long jacket, he glares straight ahead and launches into some of Broadway's best-known lyrics.

How does a bastard, orphan, son of a whore
And a Scotsman, dropped in the middle of a forgotten spot in the Caribbean by providence impoverished,
In squalor, grow up to be a hero and a scholar?

It's the second night of a monthlong run for Lin-Manuel Miranda's Hamilton at the Tempe theater, and Nicholas Christopher is playing Aaron Burr.

Miranda sang those same lyrics for President Barack Obama at the White House back in 2009. When the show opened on Broadway in 2015, Leslie Odom, Jr. belted them out as Burr.

Watching them perform on Broadway back in 2015 was nothing short of magical – thanks to Miranda’s facile rapping, Diggs’ charisma, and Groff’s exquisite comedic timing.
Lyrics are layered with meaning and delivered at breakneck speeds, seamlessly interweaving characters’ personal and political histories. And through hip-hop, Miranda sets colonial America’s issues squarely in the realm of contemporary dialogue about American identity.

The Tempe production is proof.

You probably won't recognize the actors performing in Hamilton's Gammage run, which continues through Sunday, February 25. But that doesn't diminish the strength of Miranda's Tony- and Pulitzer-winning work.

(Worth noting: The cast includes one actor — Christopher — who performed in the show's Broadway run. He played George Washington in 2016.)

The show opens with a rap about Hamilton’s migration from the West Indies to North America as a teen, and closes with a ballad sung after Burr fatally shoots Hamilton during a duel.

In between, Hamilton fights in the Revolutionary War, writes the bulk of the famed Federalist Papers that prompt adoption of the U.S Constitution, and launches the Treasury Department.

Might sound boring if you're not a history buff. But it's riveting, no matter who's playing various parts, because of how it's told.

Touring production of the musical Hamilton.
Joan Marcus
Miranda's lyrics rush forth like river rapids that can be tough to fully grasp the first time around. They’re punctuated with references to music and literary classics, and clever wordplay.

The cast primarily comprises people of color, despite the fact that history books are filled with images of white men. It’s a choice carried through in every production, on Broadway and beyond, and it signals the importance of diverse voices in moving America forward.

Miranda tells Hamilton’s story using hip-hop and rap, along with soul, R&B, and Broadway music. It’s a way of bridging Hamilton’s experiences as an immigrant in New York with the immigrant experience today.

Hamilton succeeds because it elevates a fundamental truth: Immigrants were integral to the foundation of American society, and immigrants are essential to sustaining a thriving democracy.

You don’t need big names to make that case. In fact, quite the opposite is true.

Changing casts reflect a basic democratic principle that Miranda highlights in the song "One Last Time" – the fact that George Washington chose to walk away rather than cling to power.

The cast performing in Tempe doesn’t match the perfect cadence of Miranda and Diggs' rapping during Hamilton on Broadway, but its members have their own strengths. 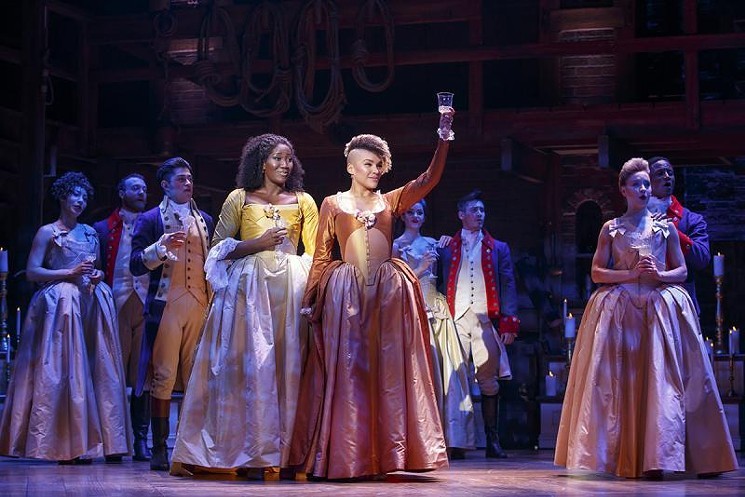 Peter Matthew Smith, who saunters out as King George in bright magenta regalia to warn that governing is much harder than it looks, captures the humor that Miranda laces throughout the musical.

For "You’ll Be Back," a song brimming with passive-aggressive sentiments, Smith delivers a satisfying mix of saucy and suave that rival’s Groff’s King George on Broadway.

Despite its many strengths, there’s a weak link in the Tempe production.

It’s the collective dance performance of ensemble members, as they execute choreography by Andy Blankenbuehler. The dancers are onstage for a significant number of scenes, so their work affects the overall feel of the production.

Blankenbuehler's choreography is sharp and high-energy, but this troupe often look like they're holding back. Kicks should be higher. Arm extensions should be longer. Turns should be more exuberant.

Miranda’s words are a powerful reminder, especially as democratic ideals face peril in the present age, that every minute is a bit of history in the making – and everyone's story matters.