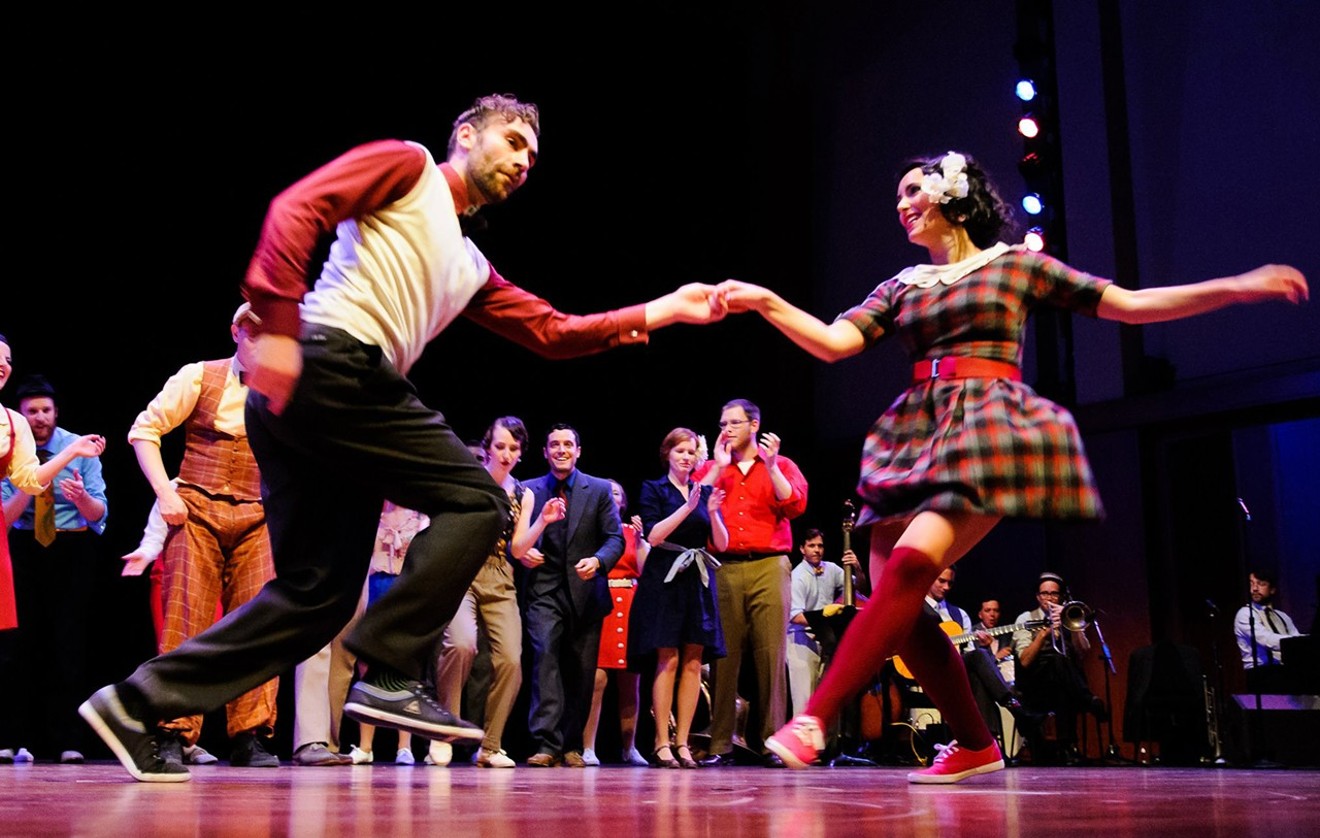 This is how swing dance looks when you do it right. Danny Ngan
Looking for plans? This week, you can sweat it out at Fall Into Fitness, celebrate freedom and independence during Fabulous Phoenix Fourth, or enjoy a refreshing Bloody Mary at Chefs + Market. For more things to do, visit New Times’ calendar.

FitPHX began with the goal of making our city one of the healthiest in the nation, but even the fittest individuals won’t move when the temperature is unbearably warm. Luckily, Fall Into Fitness is an all-ages exercise program that takes place indoors. The weekly program features Zumba and P90X to help everyone burn calories and build muscle.

Sweat it out from 6 to 7 p.m. on Tuesday, July 2, at Civic Space Park, A.E. England Building, 424 North Central Avenue. Participants are encouraged to bring their own water, towel, and mat. Jason Keil

The second season of Ryan Murphy’s groundbreaking drama Pose began with ballroom culture crossing over into the mainstream thanks to the hit song “Vogue” by Madonna. You could always watch the award-winning show at home alone, but why not gather your friends instead and head to Kobalt to watch this week’s episode? Gigi DeMilo and Yoyo Blackfire are your hosts for the evening. This viewing party also features music and food and drink specials.

Let’s assume that you’re rewatching the first two seasons of Stranger Things in anticipation of the Netflix show’s return on July 4. Isn’t it time to leverage all that knowledge to win some prizes? Bring your friends to CB Live for five rounds of trivia from your favorite science-fiction nostalgia show. Some of the questions may be tough, but the evening will go down better than a can of New Coke.

Turn things upside down at 7 p.m. on Tuesday, July 2, at 21001 North Tatum Boulevard. This is a free event. Jason Keil

Every Fourth of July, Americans look toward the sky, eager to see the fireworks that celebrate freedom and independence. Here in Phoenix, one of the largest celebrations is happening at Steele Indian School Park, 300 East Indian School Road. That’s where the free Fabulous Phoenix Fourth event that draws thousands of people is happening on Thursday, July 4, from 6 to 10 p.m. The fireworks start around 9:30 p.m., but the evening also includes live music and entertainment on two stages, a classic car show, and vendors selling food items and crafts. You can’t bring or buy alcohol. But you can bring the kids, who can check out the kids' zone complete with rides, inflatables, a water spray area, and hands-on activities. Lynn Trimble

If you’ve got a thing for swing dance, you might want to skip the fireworks and spend a night with fellow dance lovers as they kick off the four-day Swingdependance Weekend. It all starts with a free pool party at 6 p.m. on Thursday, July 4, at 3145 East Fountain Street in Mesa. The evening includes dancing to DJ music, plus a barbecue. Organizers will provide burgers, but everybody needs to bring a side dish to share. While you’re there, you can get the scoop on other swing dance happenings around metro Phoenix, and maybe pick up a dance pointer or two. Lynn Trimble

Do you remember staying up late during summer vacation and catching all the weird commercials that played on cable? People of a certain age will recall one shilling for the compilation album Freedom Rock. Two hippies sat and talked about the good old days when songs from Three Dog Night, The Moody Blues, and Dion played on the radio. Now you too can be like those stereotypical bohemians and celebrate America’s birthday while listening to America’s “A Horse With No Name” at Thunderbird Lounge’s Freedom Rock Fourth of July. There will be drink specials all night and Short Leash Hot Dogs served.

Every year, fighting game fans all over the world convene on tournaments like Evo and the Capcom Cup to determine the world’s greatest (virtual) fighter. Shady Park Tempe is joining the battle with Game Night: Mortal Kombat vs. Super Smash Bros. You can play the latest editions of these popular fighting games on a 12-foot LED display all night or check out different games on the smaller side screens while sipping the drink specials. Finish your opponent from 6 to 10 p.m. on Thursday, July 4, at 26 East University Drive in Tempe. This event is open only to those of drinking age. Jason Keil

Grown-ups having fun at the Children's Museum of Phoenix.
Lynn Trimble

Nurture your inner child as the Children’s Museum of Phoenix, 215 North Seventh Street, presents Free First Friday Night on July 5. It’s a chance for everyone to explore the museum’s offerings, which promote everything from creativity to literacy. There’s an art studio where guests can get messy, a block area for building, and a market that’s great for pretend play. Typically, admission is $14.95. While you’re there, try making your way through the Noodle Forest made with pool noodles, or watching scarves fly through the Whoosh! contraption. It’s a great way to unwind from a long work week while you get fresh ideas for at-home playtime. The museum is located in the historic Monroe School, whose alumni include famed painter Jackson Pollock. Lynn Trimble

The Phoenix Fridas artist collective, which includes 10 Latina artists inspired by Frida Kahlo, is celebrating its 15th year with an exhibition of new works at Fair Trade Cafe, 1020 North First Avenue. Join the free opening reception from 6 to 9 p.m. on First Friday, July 5, when the artists will also be showing homemade floral headpieces. Participating artists include Kathy Cano-Murillo, founder of The Crafty Chica, and Emily Costello, whose artwork has been featured on Arizona lottery tickets. If you need a bigger Frida fix, register for the free Phoenix Frida Fest happening the next day at Mucho Mas Art Studo. Lynn Trimble

Freshen up your weekend farmers market rounds with the Chefs + Market event at Hotel Valley Ho, 6850 East Main Street, Scottsdale. The free indoor market on Saturday, July 6, features food and live music inspired by the backyard grilling and chilling theme. It’s a chance to enjoy bites by chefs Sean Currid of Maple & Ash and Juan Zamora of Chula Seafood, plus spirit and wine tastings. You’ll need to RSVP ahead of time, because space is limited. Of course, the 9 a.m. to 1 p.m. event also includes a farmers market featuring fresh produce, and a cash bar so you can indulge in a Bloody Mary or Mimosa. Lynn Trimble

The mission of Palabras Bilingual Bookstore is “to promote cultural representation and diversity through language, books, and the arts.” The store is meeting this goal with the Mujerxs Summer Book Club. The first Saturday of each month focuses on a book written by a woman of color. This month’s selection is All About Love: New Visions by author bell hooks. Each chapter of the nonfiction work focuses on an aspect of a loving relationship and the mistrust men feel when in one. There will be snacks and discussions served.

Turn the page at noon on Saturday, July 6, at 1738 East McDowell Road. Jason Keil
KEEP PHOENIX NEW TIMES FREE... Since we started Phoenix New Times, it has been defined as the free, independent voice of Phoenix, and we'd like to keep it that way. With local media under siege, it's more important than ever for us to rally support behind funding our local journalism. You can help by participating in our "I Support" program, allowing us to keep offering readers access to our incisive coverage of local news, food and culture with no paywalls.
Make a one-time donation today for as little as $1.