They Came From Planet Orange: The Biggest Phoenix Suns Superfans 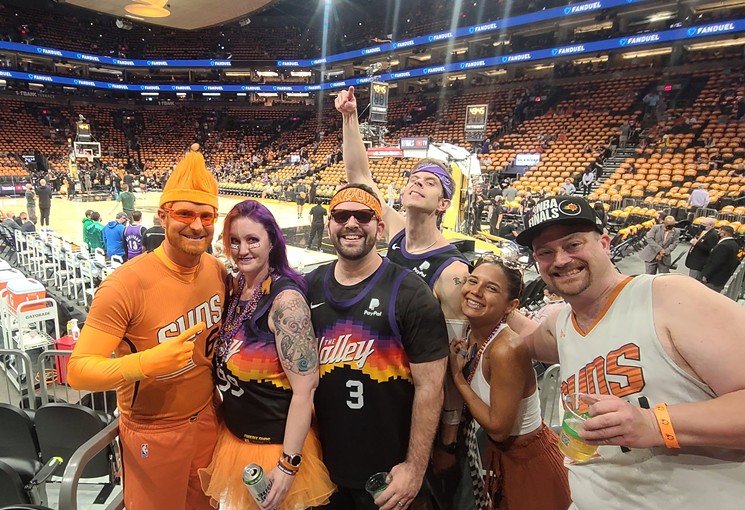 Phoenix Suns superfans at Staples Center in Los Angeles during the Western Conference Finals.
Paul Nicosia
Phoenix Suns fans are legion – and their numbers have only been getting bigger. The team has been on a wild ride filled with twists and turns over the past two months as they’ve progressed through the NBA playoffs, and their fanbase has been along for the ride.

Members of Planet Orange, the nickname for the team’s fanbase, have flocked to games at Footprint Center (formerly Phoenix Suns Arena), cheering on Devin Booker, Chris Paul, and the rest of “the Fellas.” They’ve worn the team’s popular “Valley” city jerseys en masse.

And they’ve swarmed Sky Harbor Airport to welcome the team home at impromptu rallies, like when more than 3,000 people shut down the intersection of 24th Street and Old Tower Boulevard on June 30 after the Suns beat the L.A. Clippers to win the Western Conference Finals.

As the Suns have progressed through the playoffs and battled the Milwaukee Bucks in the NBA Finals, all manner of fans have hopped the Suns bandwagon, from long-suffering die-hards to casuals. And then there are the superfans, the members of Planet Orange who go above and beyond. Some sport over-the-top costumes or never miss a home game. Others create art inspired by the team. Like other fans, each are hoping that Booker, CP3, and the rest can do what no Suns team has done before in the franchise’s 53-year history: win an NBA championship.


It might be a long shot, given that Suns are currently down 3-2 in the series and are in Milwaukee for a do-or-die Game 6 tonight. The odds are against them (Vegas currently has them as five-point underdogs), but Phoenix has found ways to pull off the impossible this postseason (remember the Valley-Oop?).

One thing’s for certain: Their fans will be pulling for them. Here’s a look at some of the biggest Phoenix Suns superfans we’ve encountered during the 2020-21 season. Ready? LFG! 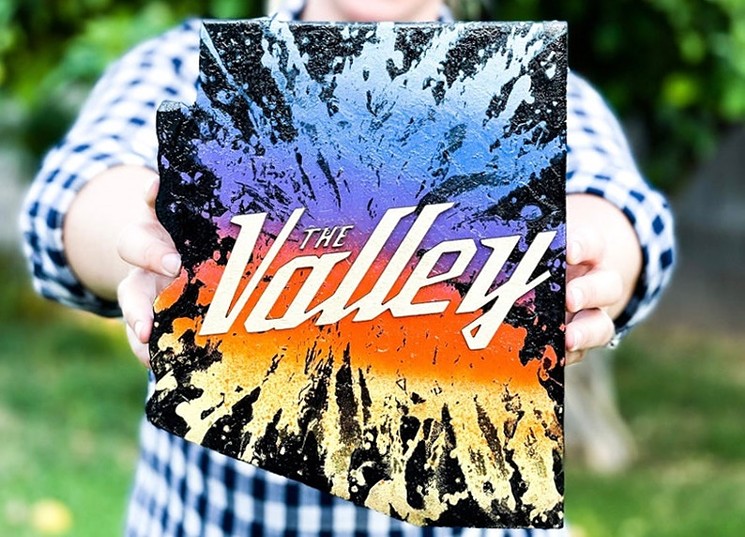 Hikers along local trails may have happened upon the Suns-themed art made by Leslie Carrasco. In recent weeks, she’s hidden the wood-based art pieces, each crafted in the shape of Arizona and decorated like the team’s Valley jerseys, on game days at parks and other outdoor locations around town for fellow fans to discover. Carrasco will provide a few hints about the location of where in the Valley she’s stashing the pieces via her Instagram. If you’d prefer to ditch the scavenger hunt aspect, she also sells them through her Etsy page.

Suns fans have been chugging beers after each win over the last few weeks, thanks to Serg Caraveo. After a Phoenix victory during the Suns-Nuggets series in June, the Valley resident started the hashtag #ChuggingWithTheFellas to go with videos of entire beers being quaffed. It’s inspired by a 2012 tweet by Devin Booker (wherein he stated “I'm thinking Hooters tonight with the fellas”) and has blown up big time. It's been referenced by Suns commentators and led to selling custom T-shirts and glassware featuring the hashtag. It’s also helped raise more than $10,000 for local LGBTQ+ youth nonprofit one n ten, which asked those participating to donate $1 per chug to the organization. Cheers!

Mesa resident Edward Willekens describes himself as "an enormous fan of basketball." It's why he spent a stint playing Mesa Community College's mascot "Thor the Thunderbird" during men's and women's basketball games at the school and now hangs out at games for the local semi-pro team the Seven City Knights.

The 27-year-old basketball junkie can also occasionally be spotted waving pom-poms and dancing at home games for the Suns or Phoenix Mercury, either in the stands or outside of Footprint Center. "All the energy and action [of the games] really get me in the mood to dance and I start moving to the music," he says. His moves have earned him appearances on the Jumbotrons at Suns and Mercury games, as well as a few local news broadcasts. “It’s really fun getting to see myself on TV like that,” he says. Zanezor’s Suns-themed raps might not get blasted from the sound system inside Footprint Center, but you can definitely hear them at every home game. The local artist, self-described as the “Official Unofficial Suns Rapper,” roams the arena’s outdoor plaza with a microphone and portable amplifier as fans roll up, spitting bars inspired by the team for anyone within earshot.

Zanezor’s created tracks after every Phoenix game, win or lose, since early in the 2020-21 season, all of which are posted to his Instagram and Twitter. Each one is improvised and is filled with praise for the Suns and disses for their opponents. “[I'm] having a party, freestyling about a win or a loss. It doesn’t matter. I’m happy it’s a good season,” Zanezor told ABC15. A few of his TikTok videos have gone viral, like a video of him getting Suns fans to sing the chorus of his track “Beat L.A.” outside of the arena that’s gotten 292,000-plus views.

Suns fandom began amping up exponentially as the team swept the Denver Nuggets in the second round of the playoffs back in June – and a local kid named Blake was the living embodiment of that feeling. During a timeout in the fourth quarter of Suns’ 123-98 blowout win over Denver on June 9 at what’s now Footprint Center, Blake was seen on camera going crazy in the stands.

As Tag Team’s “Whoomp! (There It Is)” boomed over the loudspeakers, he wildly cheered and flailed about while taking off his Suns shirt and hat. It was shown on the arena’s Jumbotron (earning a roar of approval from the crowd), made national television via TNT, and quickly went viral on social media. Dubbed “Shirtless Blake” by FOX 10 reporter Siera Santos, his antics also got the attention of Phoenix’s players, as Suns wing Torrey Craig told the Arizona Republic, “We all just looked at each other, looked around and said, ‘Wow, this is crazy.’”

When superfan Veronica Philpot comes to Footprint Center for Suns games, she comes prepared. Typically, she’s sporting a Jae Crowder jersey, purple and orange hair and makeup, and an equally colorful tutu (hence her nickname, the Suns Tutu Fan). She also has two longtime friends Paul Nicosia and Kevin Arnett, the latter of whom is known as the “Dancing Armband Man.” Each is a season-ticket holder who hasn’t missed a home game in years. In an arena known for its vocal Suns crowds, Philpot and her friends attempt to be the loudest in the building, leading cheers and screaming their lungs out. 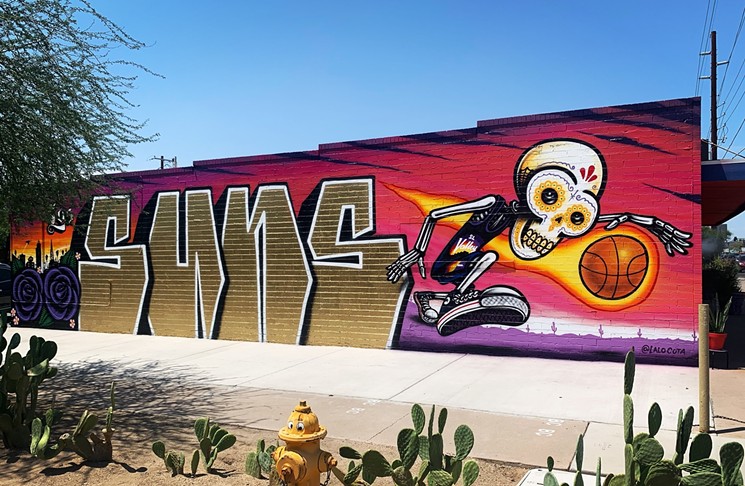 When Phoenix unveiled their alternate “Los Suns” uniforms in November 2019, the team also collaborated with local painter Lalo Cota to create a mural for the occasion. The local artist adorned an exterior wall of Carly’s Bistro on Roosevelt Row with a 10-foot-high rendition of Devin Booker as a stylized skeleton, one of Cato’s signature motifs, in honor of the star’s Mexican-American heritage. Last week, Cota created another Los Suns mural on the Calle 16 building at 16th Street and Windsor Avenue, featuring a Día de los Muertos-style skeleton (or calaca) clad in “Valley” city uniform and dribbling a flaming basketball. It’s already gotten plenty of love on social media.

Jesús Daniel Galvez, better known as rapper Dann G, dreamed of performing at a Phoenix Suns playoff game. Back in May, it became a reality when he sung his hip-hop anthem “Rally the Valley” in front of 11,824 people at Footprint Center during halftime at the first Suns game of the postseason.

Earlier this year, the team tapped Galvez – a Valley native, child of Mexican immigrants, and lifelong Suns fan – to create the song, which is inspired by the team’s slogan for this 2020-21 season. Featuring a series of shout-outs to the players in the Suns’ starting lineup, “Rally the Valley” has been played before every Suns home game as part of the team's hype video. “It's amazing, I cried the first time I heard it in the arena, you know,” Galvez told ABC15 in May. 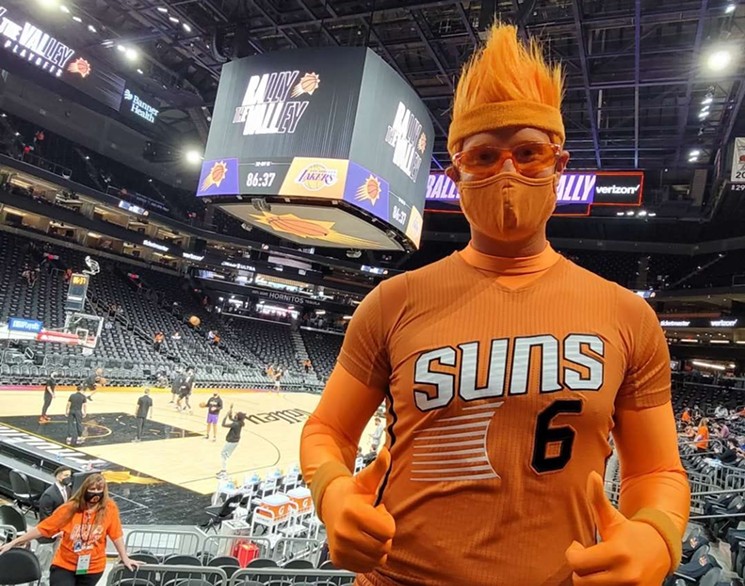 Most days, Patrick Battillo is a mild-mannered Target employee, doctoral student, and head coach of the men’s basketball team at Peoria High School. During Phoenix Suns home games, though, the 34-year-old west Valley resident becomes Mr. ORNG. Frequently clad in a tangerine-colored bodysuit, wig, team jersey, face paint, and glasses (one of nine outfits in his wardrobe), you’d have to be blind to miss him in the stands.

Battillo, a season ticket holder for 16 years, has been coming to games as the character since the Suns last made the NBA playoffs in 2010. (He’s also made appearances at local hospitals, charity events, pep assemblies, and retirement communities.) Battillo’s also shown up at road games during the Phoenix’s current postseason run and even got a fist-bump and shoutout from Devin Booker after the team eliminated the Los Angeles Clippers in the Western Conference Finals.
KEEP PHOENIX NEW TIMES FREE... Since we started Phoenix New Times, it has been defined as the free, independent voice of Phoenix, and we'd like to keep it that way. With local media under siege, it's more important than ever for us to rally support behind funding our local journalism. You can help by participating in our "I Support" program, allowing us to keep offering readers access to our incisive coverage of local news, food and culture with no paywalls.
Make a one-time donation today for as little as $1.