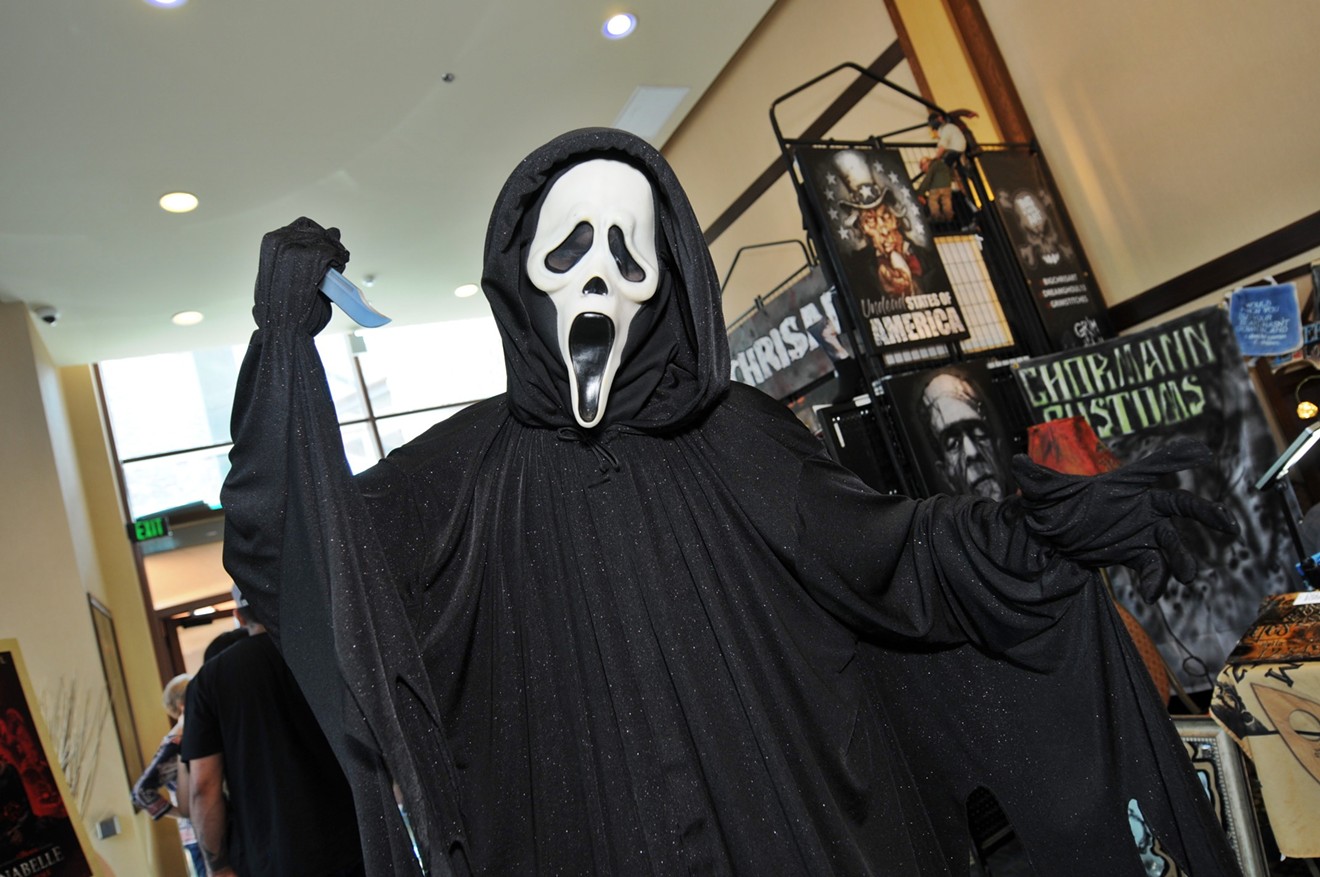 If Ghostface from Scream can wear a mask, so can you. Benjamin Leatherman

Looks like the Valley’s geek scene won’t be a complete wasteland when it comes to events this year, thanks to Mad Monster Party Arizona. Organizers of the annual convention celebrating horror fandom, slasher flicks, and other spooky subject matter is going forward with its 2020 edition this weekend, albeit with safety restrictions.

The three-day event, which runs from Friday, October 9, to Sunday, October 11, at the Renaissance Phoenix Glendale Hotel, will feature special guests like Carl Weathers and Jake Busey, dozens of vendors, photo ops with Jason Voorhees, and all the usual COVID-19 rules (including masks).

Mad Monster Party Arizona was originally scheduled to take place in April before being moved to October after the pandemic hit. While numerous other local geek events (including Phoenix Fan Fusion, Game On Expo, and Saboten Con) decided to skip 2020 entirely, Mad Monster didn’t give up the ghost.

According to Mad Monster’s Facebook page, organizers said they worked with local officials and felt that current safety guidelines outlined by the Centers for Disease Control and Prevention and the Arizona Department of Health Services were sufficient to hold this year’s event.

“Safety is paramount but one must also FEEL safe. You'll find our safety precautions are about as extensive (and often more) than most places open to the public,” organizers said. “That is in no small part due to the help of the city, venue, and both medical and social distancing-trained security personnel on our staff. That said, anyone that is unable or uncomfortable attending is welcome to the next show in 2021.”

If you’re planning to attend this year’s Mad Monster Party Arizona, here’s everything you’ll need to know before attending, including what to wear, who to see, and how to stay safe.

When and Where Is Mad Monster Party Arizona 2020?


How Much Does It Cost?

Single-day general admission is $35 at the door on Friday and Sunday, $45 at the door on Saturday, and a three-day "shriekend" pass is $90 at the door. Kids 12 and under can get in free if they're accompanied by a paid adult. According to the Mad Monster website, tickets can only be purchased with cash.

If you're interested in getting a picture with one of the special guests in attendance at the event, photo ops range from $60 to $200 and depend on the celebrity involved.


Are There Age Limits?

No, Mad Monster Arizona has always been an all-ages event. That said, it is a horror event and will feature plenty of scary subject matter that might be too much for younger attendees. The after-hours programming is only open to those and 18 and over. You’ll want to make sure your kiddos are wearing masks, though.


Where Can I Park?

Westgate Entertainment District next door features thousands of spaces. It will be free to park there during the event, but you’ll want to get there early to nab a good spot (those tend to go quickly).

Yes, except when in designated areas where eating and drinking is allowed. Also, you'll be required to have your mask covering your nose and mouth at all times. Seriously.


Do I Have to Wear a Mask During a Photo Op?

No, but there will be a plexiglass divider between you and the celebrity guest, which will be wiped down between each patron. Photos will be taken against a green screen and the barrier will be edited out.


What Other Safety Measures Will Be Used at the Event?

Patrons are required to have their temperatures taken at the door. Aisles in the vendor hall will be extra wide and one-way only with booths spaced out a significant distance. There will also be hand sanitizing stations throughout the event.

Which Celebrities Will Be at Mad Monster Arizona 2020?

While a number of actors and actresses have nixed their appearance at this year’s Mad Monster Arizona – such as Neve Campbell, Jamie Kennedy, and PJ Soles – several celebrities will be in attendance. The lineup includes Carl Weathers from the Rocky film series and The Mandalorian, Jason Voorhees actor Kane Hodder, X-Men’s Tyler Mane, Jake Busey from Starship Troopers, and cult horror film actors Bill Moseley and Dan Yager.


Will There Be Vendors?

Yes. According to the Mad Monster website, more than 25 local vendors and companies will be in attendance at this year’s event, each offering a variety of geeky and horror-themed items and services. The lineup will range from the local retailer Shirts ‘n’ Things and artists like Dead Man Designs to such publishers as Oddball Books. As we noted above, each booth will be socially distanced.


Will There Be Programming?

Yes. Panels featuring Mad Monster Arizona’s celebrity guests will happen throughout the weekend, such as panels by Carl Weathers, Kane Hodder, and Dan Yeager. There will also be discussions dedicated to Sleepaway Camp, Night of the Demons, and the role of spirituality in science fiction and horror. Other activities include the “Scares That Care” charity auction and the costume contest on Saturday night. Speaking of which …

A female Jigsaw and one of her victims.
Benjamin Leatherman

Absolutely. Organizers encourage attendees to wear any sort of getup inspired by horror films, slasher flicks, or television shows like The Walking Dead or Stranger Things. If you’re feeling clever, you can try to include your safety mask into your getup. A costume contest is scheduled to take place on Saturday night at 7 p.m. and will offer $500 in cash prizes.

Keep in mind, however, that Mad Monster is considered to be a family-friendly event and no dangerous-looking costumes, gear, or weaponry will be allowed. The same goes for anything that involves nudity. Consider yourself warned, mortals.