Your Guide to ZapCon 2022 in Downtown Mesa: Games, Schedule, and More Get your game on ZapCon this weekend. Benjamin Leatherman
Way back in the day, specifically the 1980s, arcades weren’t just a place to drain your quarter collection or waste an afternoon. They were major social hubs where you could show off your skills, see and be seen, or just geek out.

This weekend, the annual ZapCon in Mesa will return after a two-year pause caused by the pandemic to pay tribute to these pixel playgrounds of yore when it serves up two days of classic arcade action.

The main hall of the Mesa Convention Center will take on an arcade-like atmosphere and feature hundreds of old-school arcade games and pinball machines available for play. Numerous bleeps and bloops will fill the air on Saturday, April 30, and Sunday, May 1, as joystick jockeys and pinball wizards get their game on or participate in various tournaments and competitions.

And best of all, you won’t need any quarters.

What else is in store for this year's ZapCon? If you're ready, player one, read on for our guide to the event.

When and Where Is ZapCon? 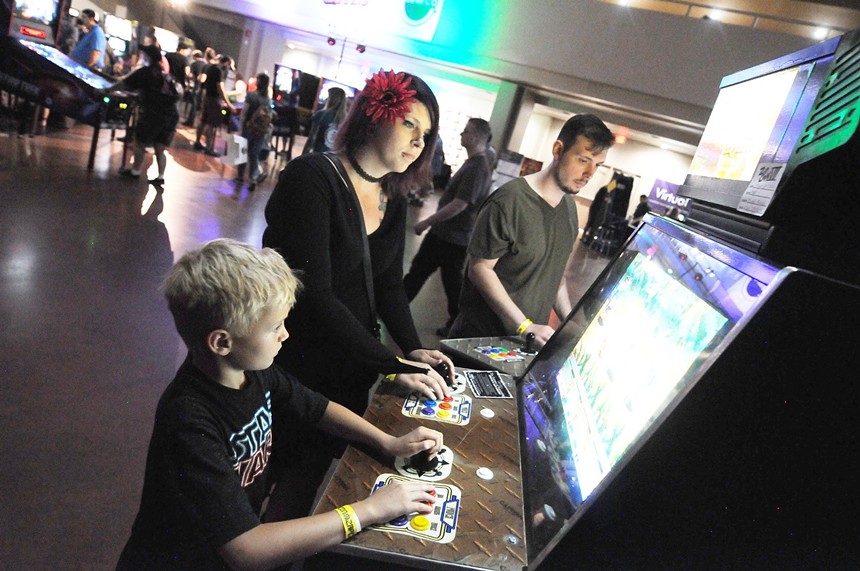 Gamers of all ages can attend ZapCon.
Benjamin Leatherman

Is There An Age Limit?

Nope. ZapCon is an all-ages event and both families are encouraged to attend. Discounted admission will be available for children 3 to 12 and kids under 3 are free.

The most hassle-free way is by taking Valley Metro’s light rail. There’s a stop a few blocks south of the convention center and fare is $2 for a single ride or $4 for an all-day pass. If you’re coming by car, take U.S. Highway 60 or Loop 202 East freeways to the Country Club Drive exit. From there, drive either north or south, respectively, to Second Street in downtown Mesa and then head east.

It’s free to park in the Mesa Convention Center’s enormous lot and there are hundreds of spaces available. The earlier you arrive, though, the closer you can park to the main building.

Will There Be Food and Drink Available?

Yes. As in previous years, local food trucks will be parked outside the main building throughout the weekend. Meanwhile, a bar will be available inside the game lounge. And if you feel like taking a stroll, a large variety of cafes, restaurants, brewpubs, and coffeehouses are a short distance from the convention center. All that said, food and drinks won’t be allowed inside the exhibition hall to prevent games from being damaged. The scene at ZapCon in 2019.
Benjamin Leatherman

As we mentioned, around 200 arcade titles and 150 pinball machines can be played at the event. (The full game lineup, which includes everything from A.P.B. to Zoar, is available on the ZapCon website.) Elsewhere, a side room at the convention center will serve as a lounge equipped with home consoles of the vintage variety and video game-themed board games.

What Sort of Competitions Will Happen at ZapCon?

If there’s one thing that gamers are big on (other than gaming, of course) it’s showing off their skills and owning the competition. They’re likely to do both at ZapCon via the various contests, battles, and tournaments that will transpire throughout the weekend.

There will be pinball tournaments for men and women, as well as one sanctioned by the International Flipper Pinball Association for both genders. Additional tourneys will be offered for kids or strictly for classic pinball games only. Meanwhile, Level One Arcade will host a high-score competition involving multiple arcade games, and local retailer The Gaming Zone will present a Mario Kart 8 tournament.

A full schedule of competitions and tournaments is available here.

What Else Is Happening at ZapCon?

Local NES cover band Minibosses will perform their prog-rock renditions of the music from such games as Metroid, Castlevania, and Mega Man 2 on Saturday night in the lounge starting at 7 p.m. More than 200 classic arcade games will be at ZapCon.
Benjamin Leatherman

What Should You Bring?

What Shouldn't You Bring?

Quarters, duh. Also, if you have a tendency to "rage quit" after getting frustrated with challenging games, leave that at home, too. Again, a number of the machines at ZapCon are vintage or even antiques, and their owners would prefer it if you didn't slam your fists on their property after you lose. You'll want to go easy on the joysticks and buttons, too.
KEEP PHOENIX NEW TIMES FREE... Since we started Phoenix New Times, it has been defined as the free, independent voice of Phoenix, and we'd like to keep it that way. With local media under siege, it's more important than ever for us to rally support behind funding our local journalism. You can help by participating in our "I Support" program, allowing us to keep offering readers access to our incisive coverage of local news, food and culture with no paywalls.
Make a one-time donation today for as little as $1.