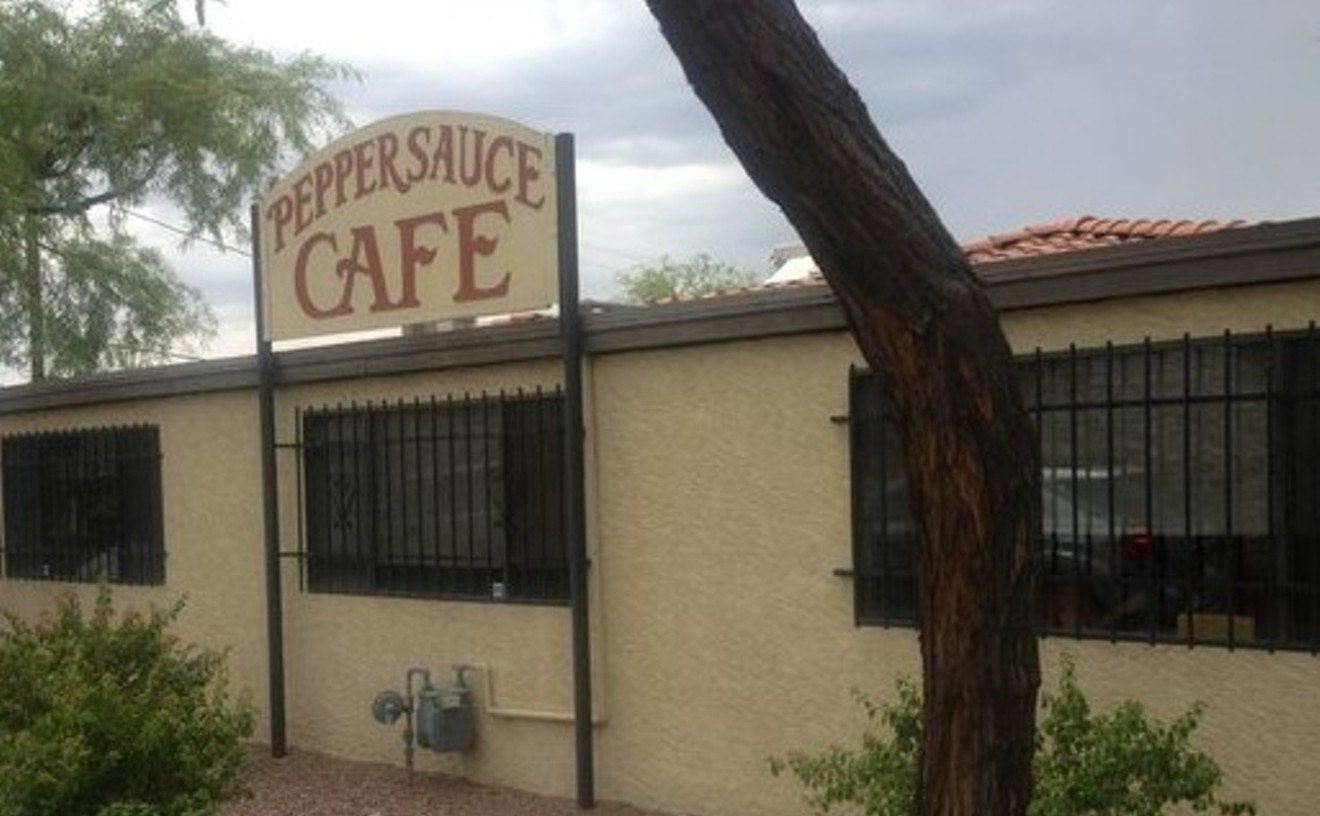 Our handyman knows how to fix anything. He also knows how to eat: hearty, heaping portions of he-man grub like chicken-fried chicken, meat loaf, chili, burgers, and breakfasts big enough to fuel him through a hardworking day. His favorite place to fill up when on the run for more building materials, and now ours, is the Peppersauce.

It's pretty much a truck stop, parked among industrial yards, massive warehouses and salvage dumps. But it's pretty, like a country farmhouse inside, and flowing with serve-yourself coffee, fountain drinks and good cheer. The food is the real deal, too, homemade and hearty (the charbroiled chili-size burger is tops, flooded with spicy chili, Cheddar cheese and onions; the meat loaf is like Mom's, served with mashed potatoes, gravy, corn and a dinner roll). Any of the breakfasts start the day with a smile, like the $4.25 specials (ham and green chile scramble, hash browns and toast on Tuesdays). Thanks to our handyman, we've got a fix on the best working fella's lunch in town.

When we were in college, we saw lots of things spinning through the air. But now that we have a firmer hold on reality, we realize that, yes, a pizza actually can come from some far-away planet. If it's crafted by the creative cooks at Cosmic Pizza.

The place is tiny (order through a cutout in the wall), yet the menu is massive, almost galactic. More than 50 toppings. More than three dozen pizza combinations. More than two dozen subs, plus calzones, salads and appetizers. All with an otherworldly theme. Check out the names of the dishes: pulsar, axiom, quark, Apollo 13, full moon, alien, Sputnik. It's almost as much fun ordering as it is eating. No surprise, Cosmic caters to the ASU crowd, staying open until midnight on weekends with $1 delivery.

The moon isn't made out of green cheese. Here, it's a pie topped with breadcrumbs, prosciutto, garlic, Romano and basil.

We love to party. Who doesn't? Yet we have still to figure out why, the more we abuse our bodies, the more our bodies cry out for even more rough treatment.

Places like Jack in the Box or Denny's are quick fixes, but we can never respect ourselves in the morning. We rub our blurry eyes the next day, see that crumpled sourdough Jack wrapper by the side of the bed, and dread sets in -- what have we done?

So now, we head over to Mickey's Hangover, a fun dive bar that serves its full menu until 2 a.m. on weeknights, 3 a.m. on weekends. It's trailer-trash food, but well-prepared trash, like Santa Fe rolls of four fat taquitos stuffed with chicken and chiles in a thin, potent jalapeo sauce. Or "Jesus on the Mountain," mounding hefty shavings of ham with crisp bacon, melted Cheddar, two fried eggs and potato chunks on a bun. Or Mickey's Monster, an enormous pizza piled with every topping offered in this universe. And miniature hot dogs are cute, tucked in little-bitty buns, topped with Cheddar and chile, with a tiny bottle of Tabasco served alongside.

Hey, it's not high cuisine. But at least we won't be ashamed when we awake.

Best Place For An It's-So-Late-It's-Early Breakfast

It's a fairly frequent occurrence that we're working, puttering, reading, retiling the roof, solving quantum physics, when suddenly we realize that, oops, it's the middle of the night and we haven't eaten for more than 24 hours. The only thing in our fridge is something we might recognize if it weren't covered in green fur, and we're not about to run to the grocery store for some ramen.

Which is why we have Western Pizza on our speed dial. The kind folks here keep the kitchen open until 1 a.m. on weeknights, and until 3 a.m. on weekends. They even deliver (from 32nd to 68th streets and Thomas to Camelback roads)!

Western Pizza serves up victuals so good, we could eat them 'round the clock. One pie, actually, keeps us full for at least two days. The 18-inch large is almost three inches thick and weighs almost 20 pounds, loaded to the gills with toppings like the Western Round-Up -- mushrooms, pepperoni, salami, ham, peppers and onions under buckets of mozzarella. And there's plenty of other delish dishes from which to choose: souvlaki on a stick (savory pork in Greek herbs), fries and gravy, a half-dozen types of wings, spicy barbecued ribs, a flurry of filling salads and funky desserts (bowl of cookie, puffed wheat cake and such). Now, is it time for breakfast yet?