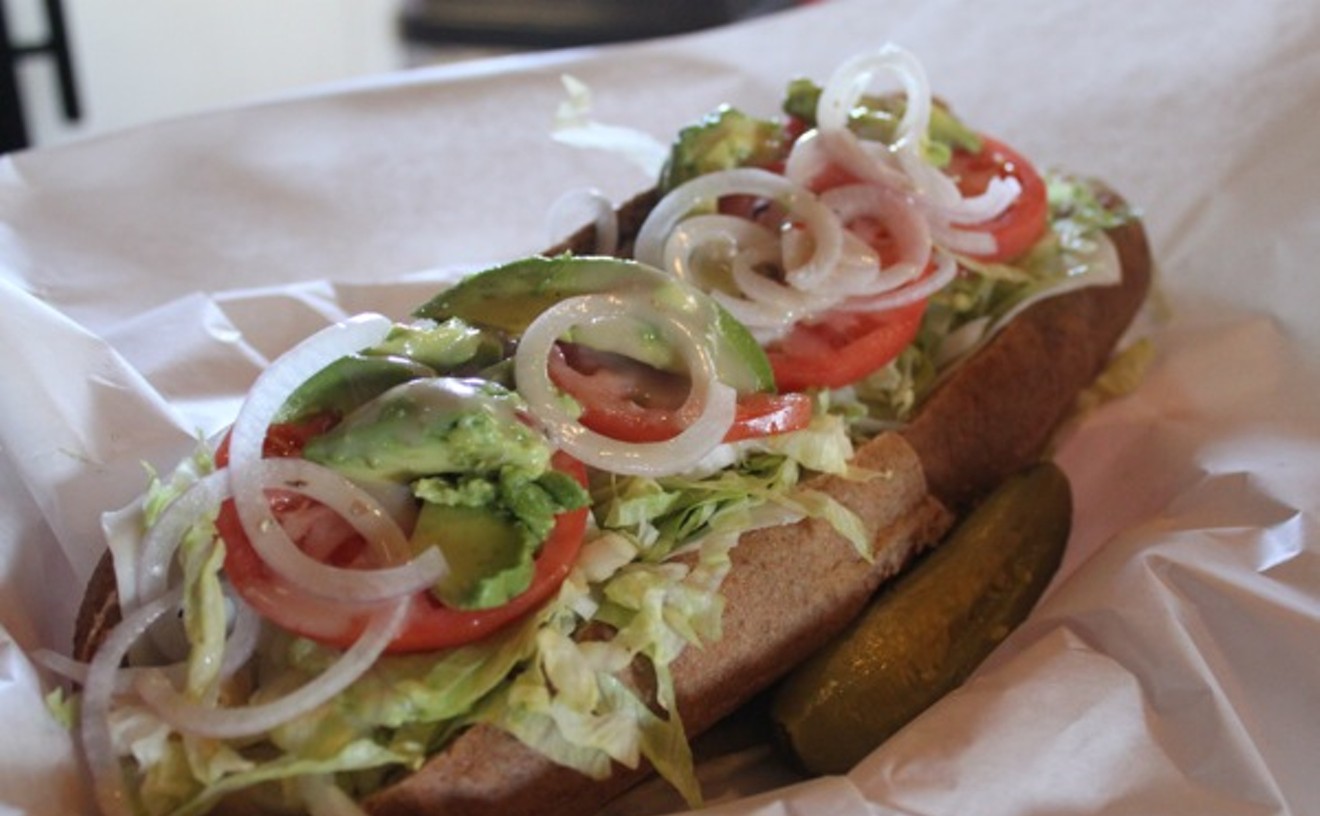 Evie Carpenter
There's a lot of local history in this gas station turned sandwich shop. The deli sits right next to the Pioneer Memorial Park and Cemetery, where some of Arizona's first settlers and political figures are buried, and the building has been a presence on Jefferson Street since its birth as a Mobil gas station in 1926. The inside walls are decorated with vintage metal signs and old photos, but the most striking decoration is the collection of Arizona license plates that covers all four walls. There are dozens upon dozens of rusted old plates, in various colors and stages of decay, dating back to 1912, the year before Henry Ford started mass production of automobiles. So while you're waiting for your sandwich, you can look up and wonder how it must have been to drive in Phoenix before there were freeways. 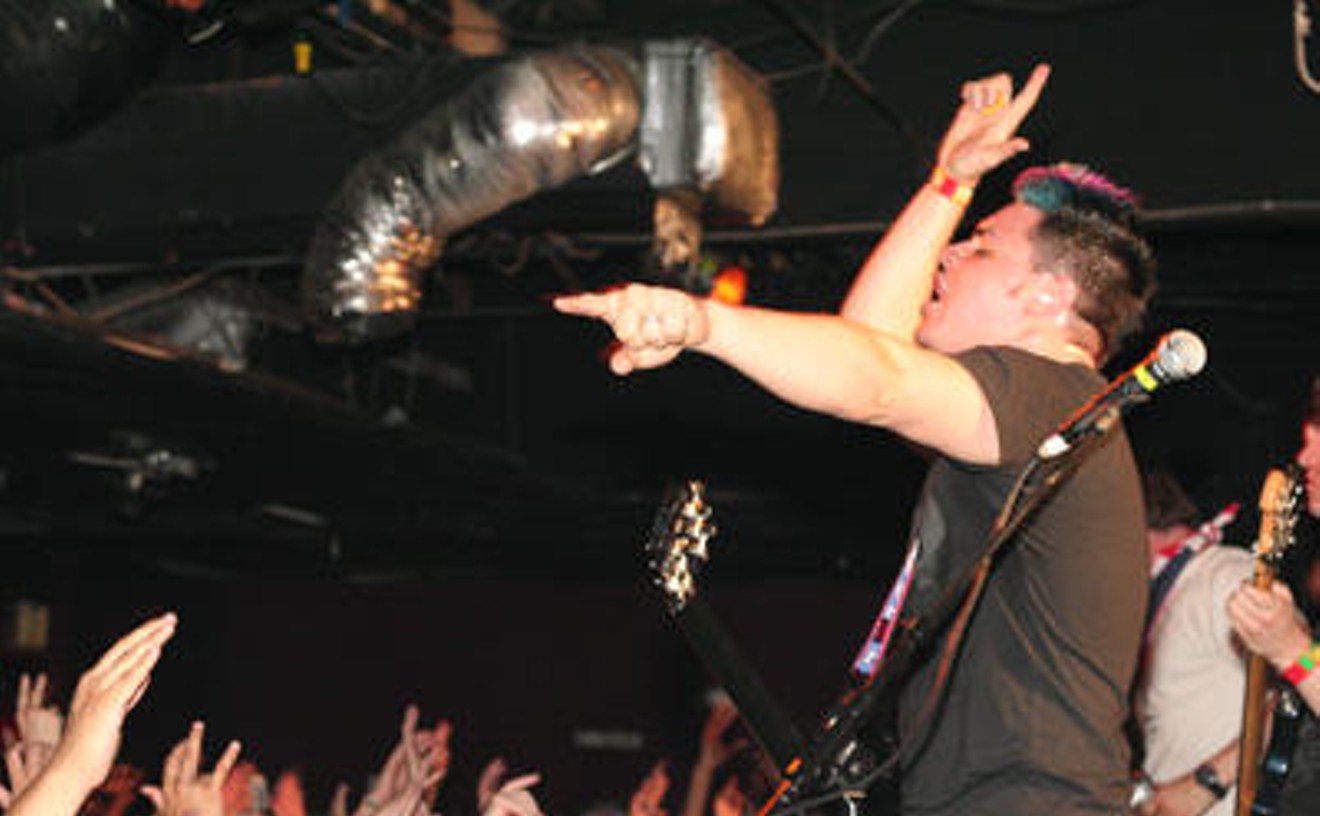 Everything else in the Valley is in a strip mall -- why not a music venue? While this place has been around for years, it only recently expanded to double its previous size, with a bigger stage, a bigger bar, and a broader lineup. Plenty of great national acts have played here, but it's clear that local rockers have made this their home. Need proof? Just take a look at the bookings calendar. On almost any given week, somebody's throwing another CD release show here.

For years, Valley bluesman Hans Olson lobbied valiantly to establish an Arizona Blues Hall of Fame, building a list of 65 inductees ranging from '40s bandleader Louis Jordan (who moved here for his arthritis) to local stalwarts like Small Paul Hamilton, Big Pete Pearson, and Rochelle Raya. In the end, Olson lamented, his dream of building a blues museum wound up being only "a plaque on the wall of the Rhythm Room." But that may be fitting, since virtually all of the living inductees on the list have played the Rhythm Room at one time or another. The plain-looking, boxy little club near the center of the city may not have the prestige of Cleveland's or Seattle's music museums, but as the default home of Valley blues heads, the plaque's in the right place.

BEST SIGNS OF THE TIMES

"A Few Pieces of Advice to Help You on Your Way"

We can't recall when we first noticed the signs stuck in the grass where Mill Avenue veers into Apache Boulevard, curving around Gammage Auditorium at Arizona State University in Tempe. But we figured they had to be a prank, since one of the poster-size boards -- designed to look like a green chalkboard -- held the message: "Always have at least 5 boyfriends."

"The most important things can't be taught in a classroom."

"Network. It's not what you know it's who you know."

"Be kind to your knees."

"Don't talk about yourself too much."

The signs made us think -- enough to call around and try to figure out what the heck was going on. Turns out, the public art project was a collaboration between ASU and the City of Tempe, the brainchild of an artist named Mary Lucking, who collaborated with members of the community to come up with the modern-day truisms.

"Some people initially thought they were 'Burma-Shave-type' signs and were supposed to be read as a single message," she says.

One ASU music professor reported that he watched a woman pull up in her car to get a closer look at the "5 boyfriends" sign. She told him that was disgusting and changed it to read "1 boyfriend."

Cripe says: "Mary, the artist, thought that was amusing and then fixed it."

Young singles who know how to make a cowboy hat and denims look bad-ass strut their stuff on the Rockin Rodeo dance floor at Graham Central Station in Tempe's auto mall district. Part of a Texas-based chain of megaclub "entertainment complexes," Graham Central Station combines four clubs and four distinct clubbing populations -- retro, karaoke, urban dance and country -- under one roof. But it's the country club that gets the Odessa chain's fullest attention, featuring a mechanical bull and the complex's biggest dance floor. Recently, GCS added Thursday night Rage in the Cage fights to its weekly mix, promising "Mayhem at the Station," along with 99-cent longnecks and beginner country swing lessons. Giddy up! 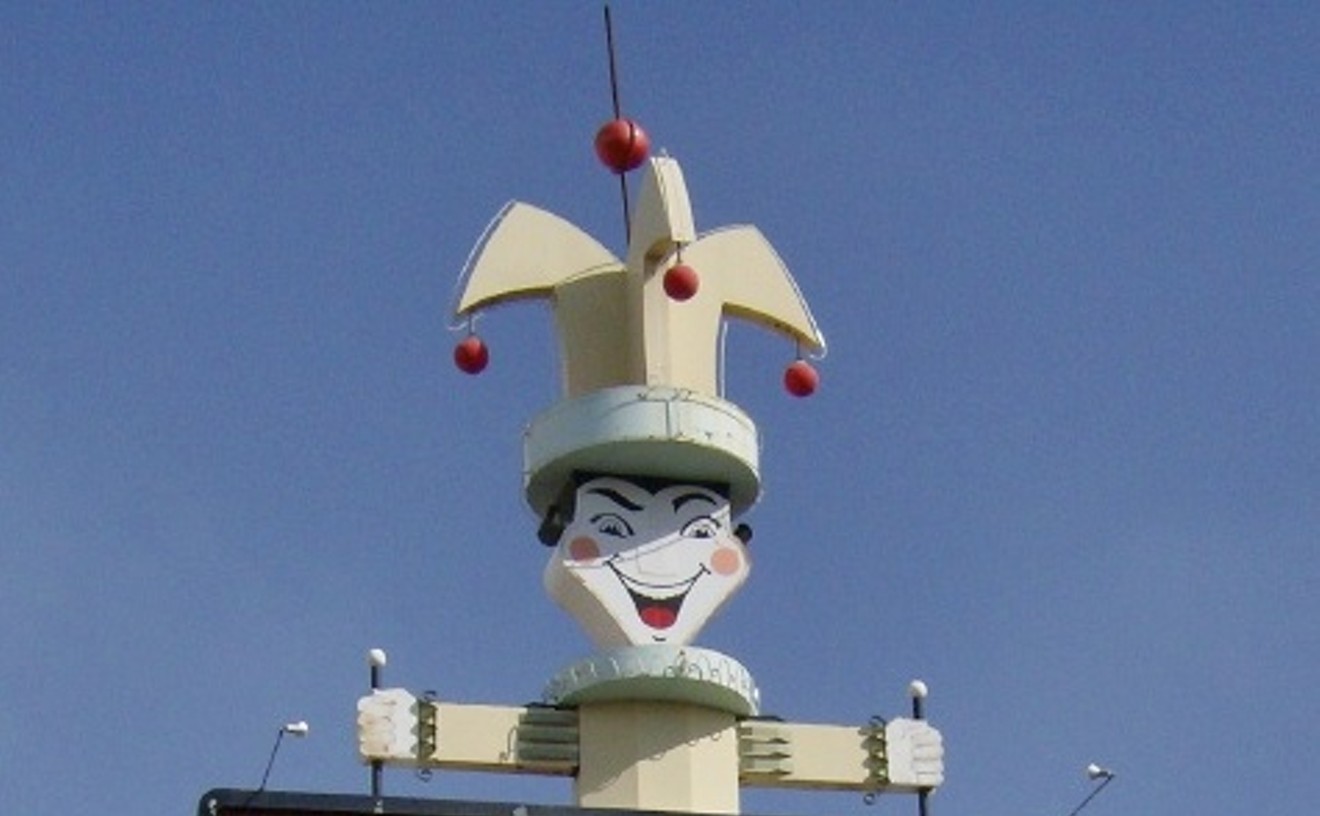 Phoenix is notorious for bulldozing its own past faster than you can say "custom homes from the $550s." That's why you should cruise west on Grand Avenue/U.S. 60 right now and look at the gloriously tacky sign for the defunct honky-tonk Mr. Lucky's, before it ends up existing only on Web sites devoted to roadside kitsch. Both the 50-foot-tall neon joker that leers at passing traffic and the club it advertised date back to 1966, when LBJ was president, cigarettes were cool, and a guy named Waylon Jennings used to play at this country joint on the dusty western edge of town. The bar closed in 2004, and this sad old sign is one of the few relics remaining from the days when Phoenix was still rough, rowdy and Western.

50 Cent did his two-step on the bar. Britney mingled with the regular folks on the dance floor. LL Cool J sat in the exclusive "Owner's Booth" and signed autographs for fans. And such hip-hop/R&B royalty as Eve, Busta Rhymes, Missy Elliott, Beyoncé, and Alicia Keys have all gotten their groove on here. This is why CBNC is legendary in the Valley, because the club brings in the big names, due in no small part to owner Jodi Upton. Through her luxury car dealership, Scottsdale's Exotic Auto Sales, and her friendship with rap producer Swizz Beatz, godfather of one of her sons, she knows everyone worth knowing in hip-hop. Upton overcame a bad rap CBNC had under previous management to make her danceteria one of the safest in the Valley, despite the high-profile Loren Wade incident that happened a few months back in the Papago Plaza parking lot, far from CBNC's doors. This hurt CBNC for a minute, but it quickly bounced back, reestablishing itself as the premier hip-hop club in the Valley. Hats off to Upton for persevering and prevailing, and for keeping it real while the haters were wishing her ill.

How we love art that happens to be functional as well as visually arresting and entertaining. That's why we're particularly enamored of artist Kevin Berry's "Tributary Wall," which undulates its way along the west side of Goldwater Boulevard between Camelback and Indian School roads in Scottsdale.

Berry's rusty metal fish-out-of-water, swimming placidly on a rippling wall toward a canal originally built by the Hohokam Indians, does double time as a sound barrier for an adjacent residential area affected by nearby commercial development. The fish, one of which swims upstream, are set against glass blocks that allow light to stream out against the wall, which is lined with a metal grid fence stuffed with smooth river stones.

Conceptually, this is Berry's "tribute" to our Native American forefathers who first tamed water in the barren desert of the Valley, as well as to the very headstrong nature of Arizonans themselves, who are notorious for going against the flow. 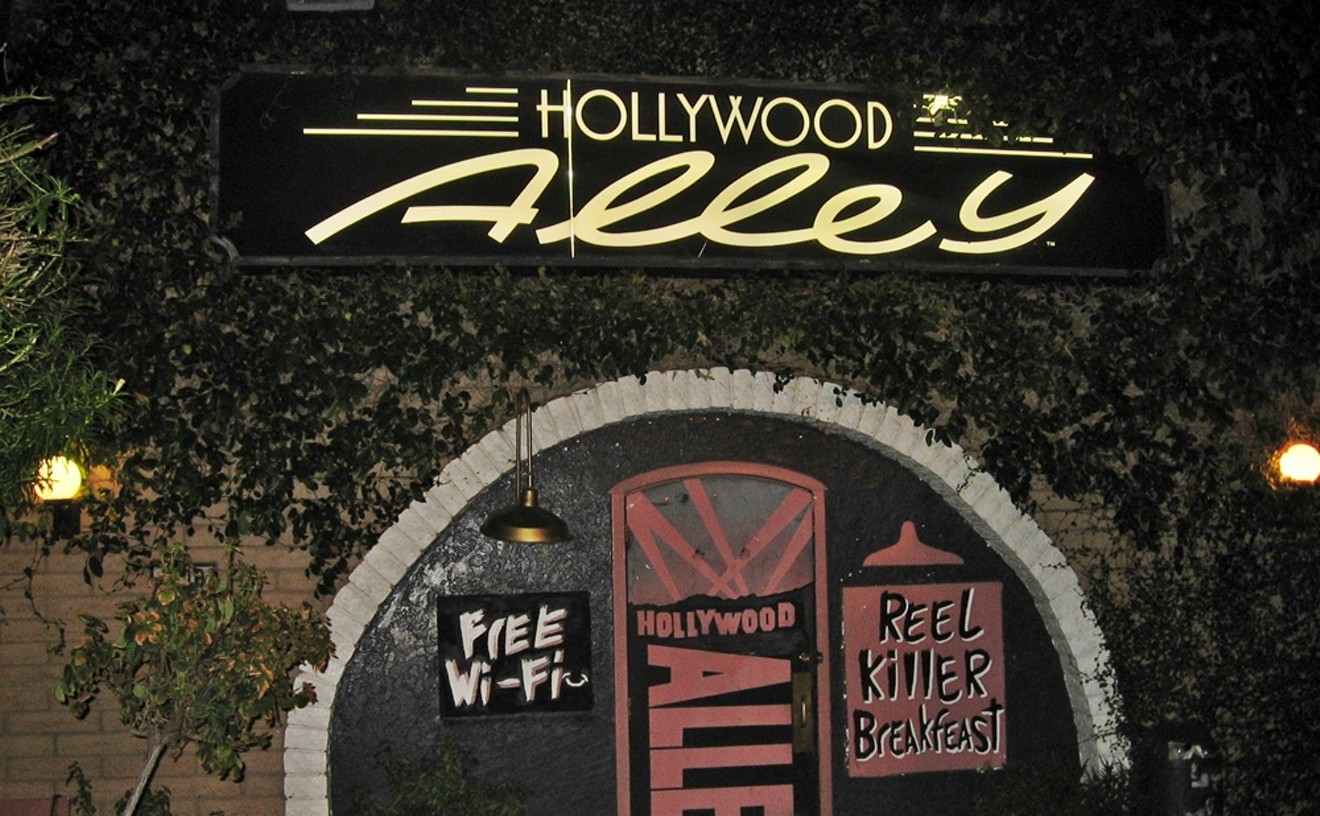 Wanna see giants walk the Earth? Then check out the Blunt Club on Thursday nights at Mesa's Hollywood Alley, where you'll catch live spoken word, painting and performance by legends in the Valley hip-hop scene. Like that "verbal taxidermist" and last year's New Times Best Of cover model, MC Emerg McVay of Bionic Jive fame. Or urban artist extraordinaire Adam Dumper, a.k.a. Dumperfoo, who slings the paint like no man alive save for PBS' Bob Ross, if you count him among the living. Blunt's also got DJs like Element One, Tricky T, and Hyder. And on the floor are such renowned dance troupes as the Phunky Phoenicians, Furious Styles, Nebellen, Future Styles Sour Patch, and Mellow Drama. The Blunt Club used to pop off at Priceless Inn (now Boston's), but now it rocks the mic right in Mesa. Here the party's always live, the drinks cheap, and the squalies down for whatever you got goin' on, playa.

The folks in the Maple Ash Neighborhood Association have one heck of a pipe dream. Over the past two years, the inhabitants of the sylvan residential area located just west of Arizona State University have mixed a deluge of grant money from the City of Tempe with the torrential creativity of Valley artists Nina Solomon, Ruben Valenzuela, and Chris Rowley in order to change two of the monolithic irrigation standpipes that dot their district from graffiti-tagged eyesores to lush eye candy. Both of the cylinder-shaped concrete constructions, which control the irrigation system flooding their yards monthly, have been covered over with an earth-toned mosaic montage of river rocks, ceramic tiles, and metalwork.

Each work is separately themed, as well as sharing an ample offering of plant and water imagery symbolizing the role both have played in their stomping grounds. The first piece, located at Ninth Street and Maple Avenue, is dedicated to the architecture unique to the homes in the immediate vicinity, with earthenware representations of windows, doors, picket fences, and a curlicue of wrought iron crowning the top.

The second, at 13th Street and Ash Avenue, is a mini-museum of the canal system of the Valley, featuring tiles imprinted with historic photos of swimming in drainage ditches and anecdotes about hunting. There are also seats made from carved-up pipes, as well as a stream-shaped landscaped path. MANA's organizers are planning to redecorate most of the neighborhood's standpipes and keep the creative juices flowing. Other neighborhoods should take note.