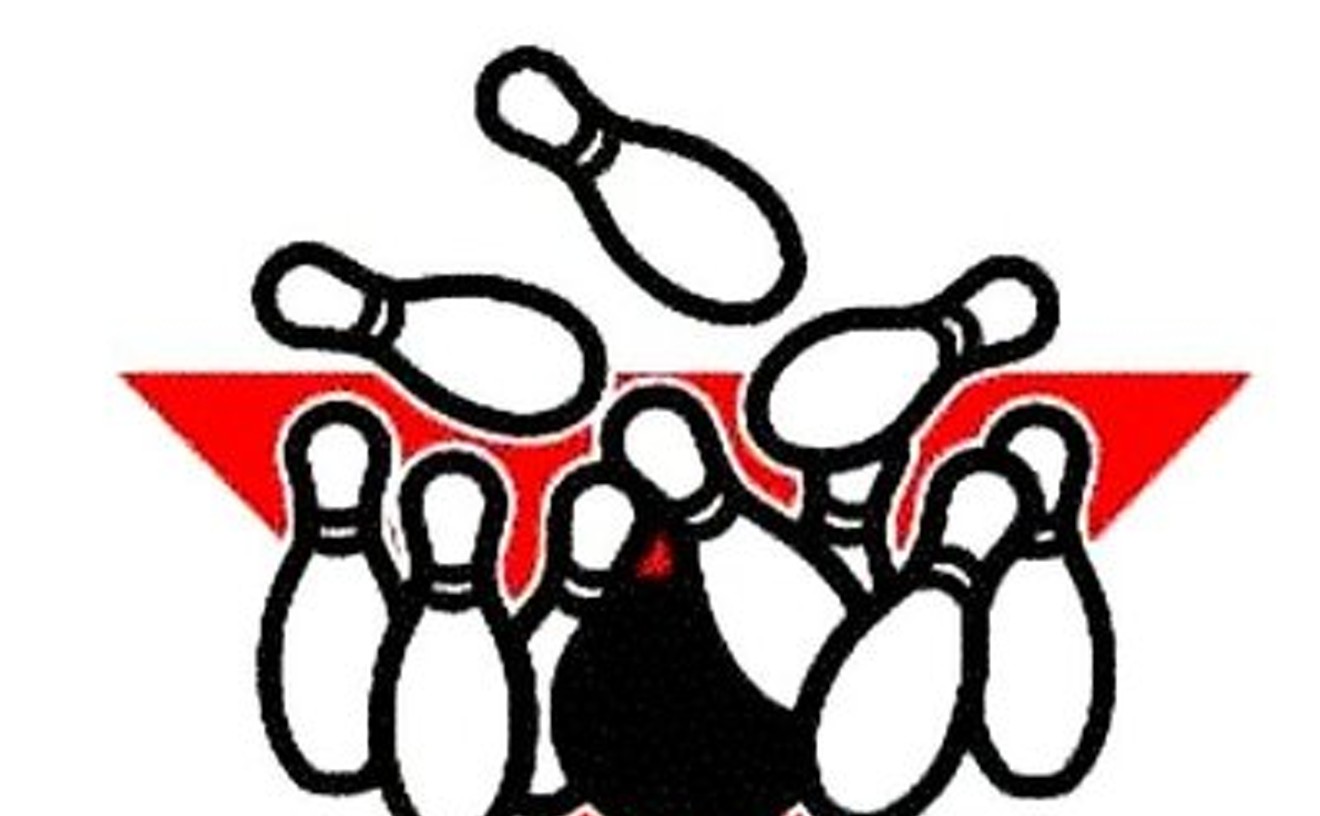 Real bowling alleys have a little grunge to them. They're not too slick, not too clean, cavernous but friendly — the kind of place where Walter and Jeffrey "The Dude" Lebowski might feel comfortable bellying up to the bar and knocking down some pins, where the pizza, fries, and wings are just-right greasy and the beer is good and cold. We think the Dude would approve of the lanes at Indian School and 30th Street. We think he'd like the fact that on a Saturday night, the feel is more small-town than big, and you can find some actual teenagers, unplugged from their electronic devices and communicating with each other directly over a game. We think he'd like the Sunday-morning bowlers — the little boy and his grandmother who come almost every week, the single dad herding his offspring — and especially the raucous Thursday-night bowlers, including a bunch of arty types.

But, hell, we've introduced this place enough. In the immortal words of Walter Sobchak, "Fuck it, Dude, let's go bowling." 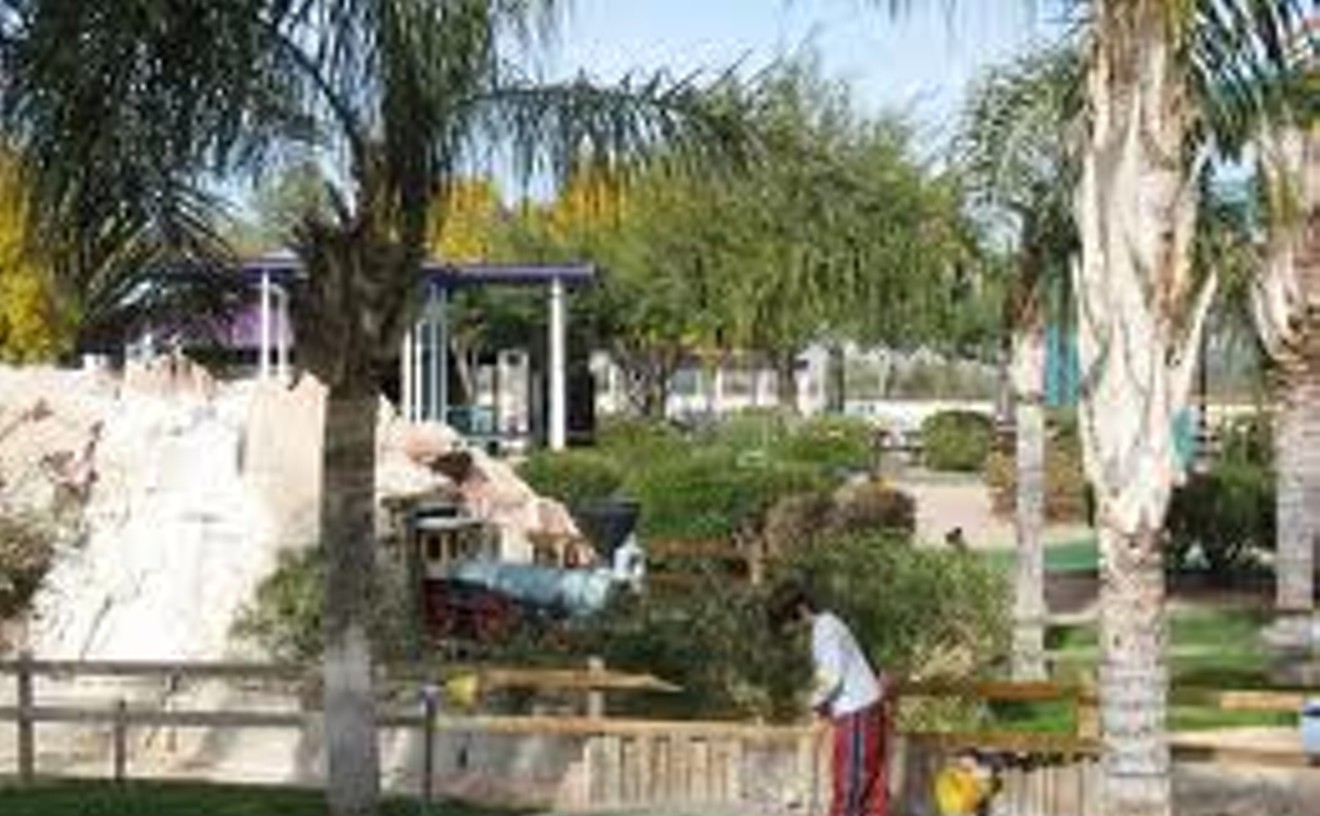 Miniature golf really is the perfect sport. It requires more luck than skill, people of all ages can play together, and it's fun even if you suck at it. Tilting at windmills against a golfing pro can be annoying though, which is why we love Fiddlesticks. The park has two 18-hole courses; one is an easy course with traditional cute-ass castles, and the other is a sports course with red-rock waterfalls and simulated sand traps. If you've got one seasoned player, you can always ship him off to the sports course or the on-site driving range, which is outfitted with misters and lights for nighttime driving. And if dad the 8-over-par golfer insists on playing without giving you a handicap, you can just pray he'll run into a few water hazards.

Kickball has dominated the realm of sport for people who really just wanna get fucked up and mess around for far too long. But it's a little too first-year-out-of-college, binge drink-y for our taste. Luckily, we were introduced to the world of disc golf — a more laid-back way to drink, smoke, and still feel as though you're getting some kind of physical activity in. We're not quite sure how throwing a Frisbee around qualifies as sport, but it does, and people take it seriously. There's even a Professional Disc Golf Association and international leagues, and a store that sells discs (which we, like the novices, just called Frisbees until we learned that's a brand name, not a catch-all term), caddy bags, and other disc golf accessories. But unless you plan on getting really into it, we suggest just tagging along with someone who already has the equipment. And by the way, the game is actually pretty hard, so be prepared to fish your discs out of the water if you're playing on a course that has one. There are courses throughout the Valley. We're partial to the one at Moeur Park/Papago Park, but you can look them all up at www.pdga.com. 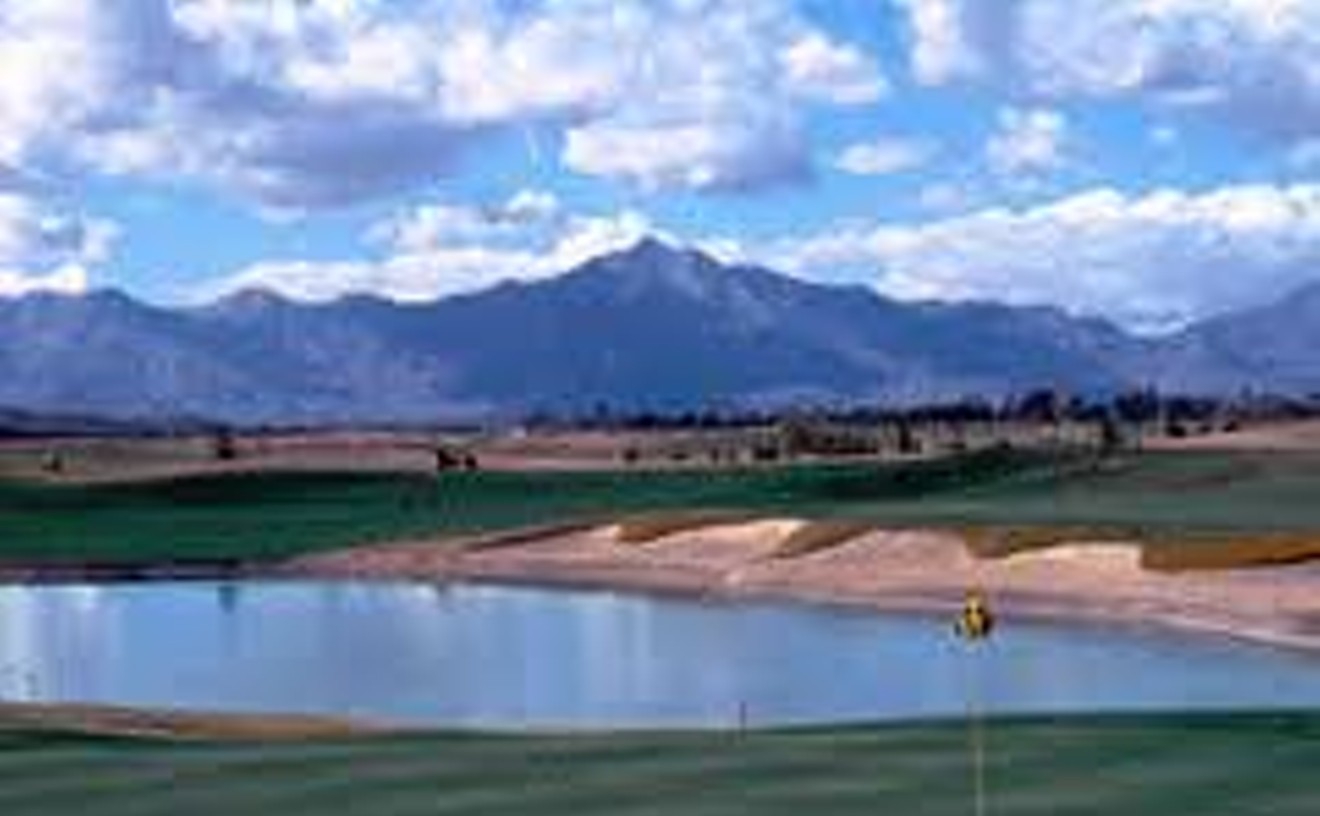 Not only is Aguila the newest, fanciest municipal golf course in Phoenix, it's incredibly cheap. You can walk the course for $16 (or $12 after 11 a.m.) or rent a cart for $27 (or $23 after 11 a.m.). Designed by Gary Panks and opened for business only 8 years ago, Aguila has an 18-hole championship course and a nine-hole par 3 course. Located on what used to be the Alvord family farm, the course has some of the prettiest views you'll find on a municipal court — South Mountain and the Estrella Mountains in two directions and the Phoenix skyline in another. Golf addicts in town call it the best-kept secret in affordable golf. Guess the secret's out now, but everyone deserves to know about this pretty, cheap place to play (especially since Papago, probably the most scenic course in town, is closed for construction.) There's a full-service pro shop on-site and, if you get hungry, the Eagle's Nest Café is open from sunrise to sunset. 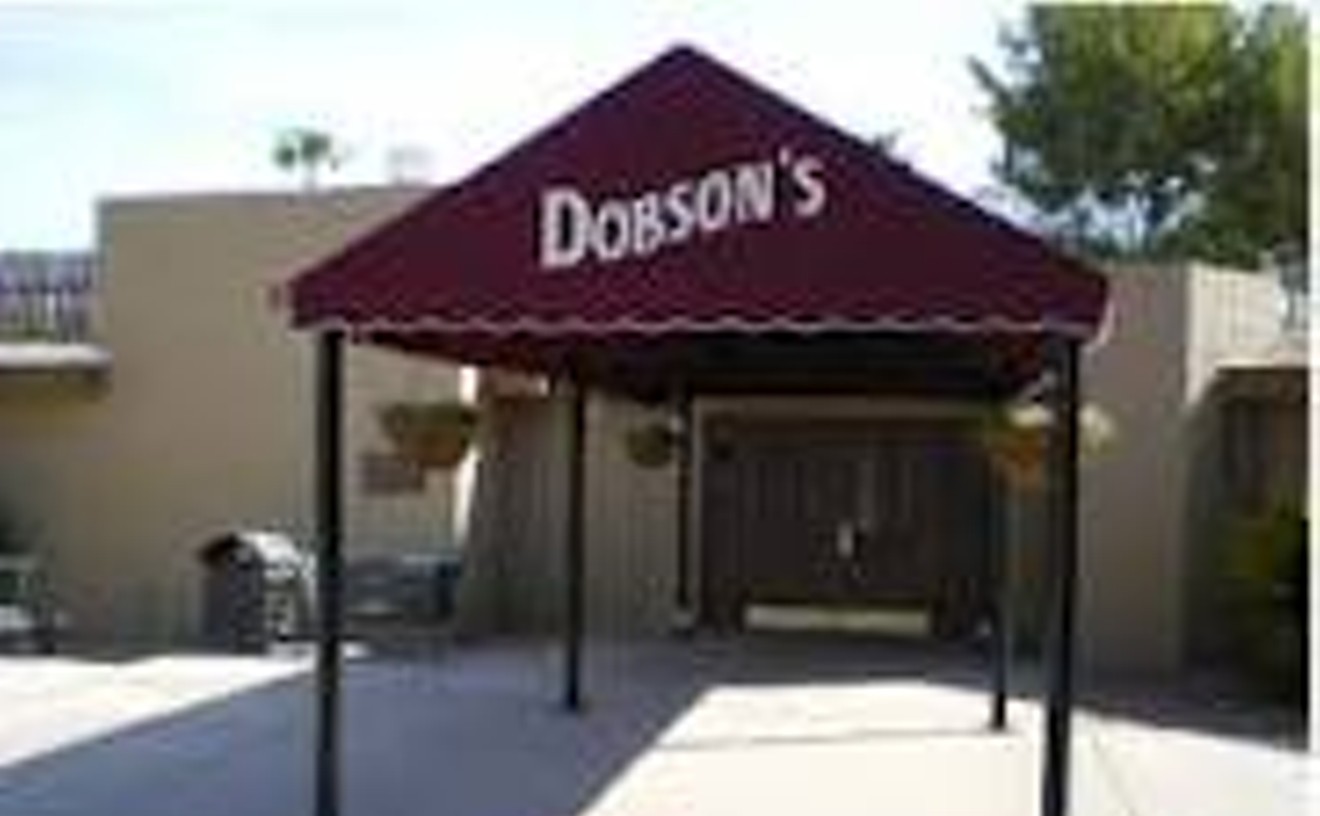 Dobson Ranch may sound like the name of a private golf club, but it's not. The city of Mesa owns and operates the course. This year, there's no contest in this category: The storied and scenic Papago Golf Course in Phoenix is currently closed for a much-needed $8 million renovation (expect a beautiful new course at the historic Papago when it re-opens in November).

Phoenix's loss is Mesa's gain, for the time being, anyway. Dobson Ranch's championship 18-hole course has been in Arizona longer than many Phoenicians, since 1972 to be specific. That age means the course has its share of mature trees — which give a nice, non-desert feel to portions of the greens and fairways.

Those trees also provide some shade for cheap summer golfing on early, dew-laced mornings. With a summer rate of just $15 for 18 holes of golf, it's tough to beat Dobson Ranch, with its 6,712 yards of fairways. The city of Mesa keeps the Bermuda grass in great shape, and the course offers a driving range.

True, the $2 million to $10 million homes alongside the Boulders and Estancia clubs aren't eyesores. But The Golf Club Scottsdale gives purists the opportunity to play an award-winning course amongst beautiful high-desert scenery and with nary a mansion in sight.

That's why Golf Magazine named The Golf Club Scottsdale one of the "10 to take your breath away" in 2005, and Golf Digest placed it among the top 10 Arizona courses in 2007.

Befitting such a majestic and secluded course, the mansion-like clubhouse hits well below par (that is, in a good way). Both the clubhouse and restaurant have an old-world Royal Palms-esque air about them. And like its neighboring north Scottsdale courses, The Golf Club Scottsdale will challenge even the most avid (and wealthy) of regular golfers, particularly — we hear — on the final four holes.

We played all sorts of sports in our younger days, but when it came to baseball, strikeout was our middle name. That's until Daddy took us to Main Street, Mesa just west of Gilbert Road to this batting range (which was called Danny's Dugout at the time — now we're really dating ourselves), where a friendly fellow took us into the slow-pitch baseball cage and taught us to stop whiffing at every pitch. Today, the creaky baseball and softball range still looks as it did in the those days, save for the misting system that keeps batters cool in the summer months, a remodeled clubhouse chock-full of arcade games and baseball gear, and an upgraded concession stand that divvies out $1 hot dogs every Wednesday and Friday night from 6 to 8 p.m. Home Run Stadium is open just about every day. 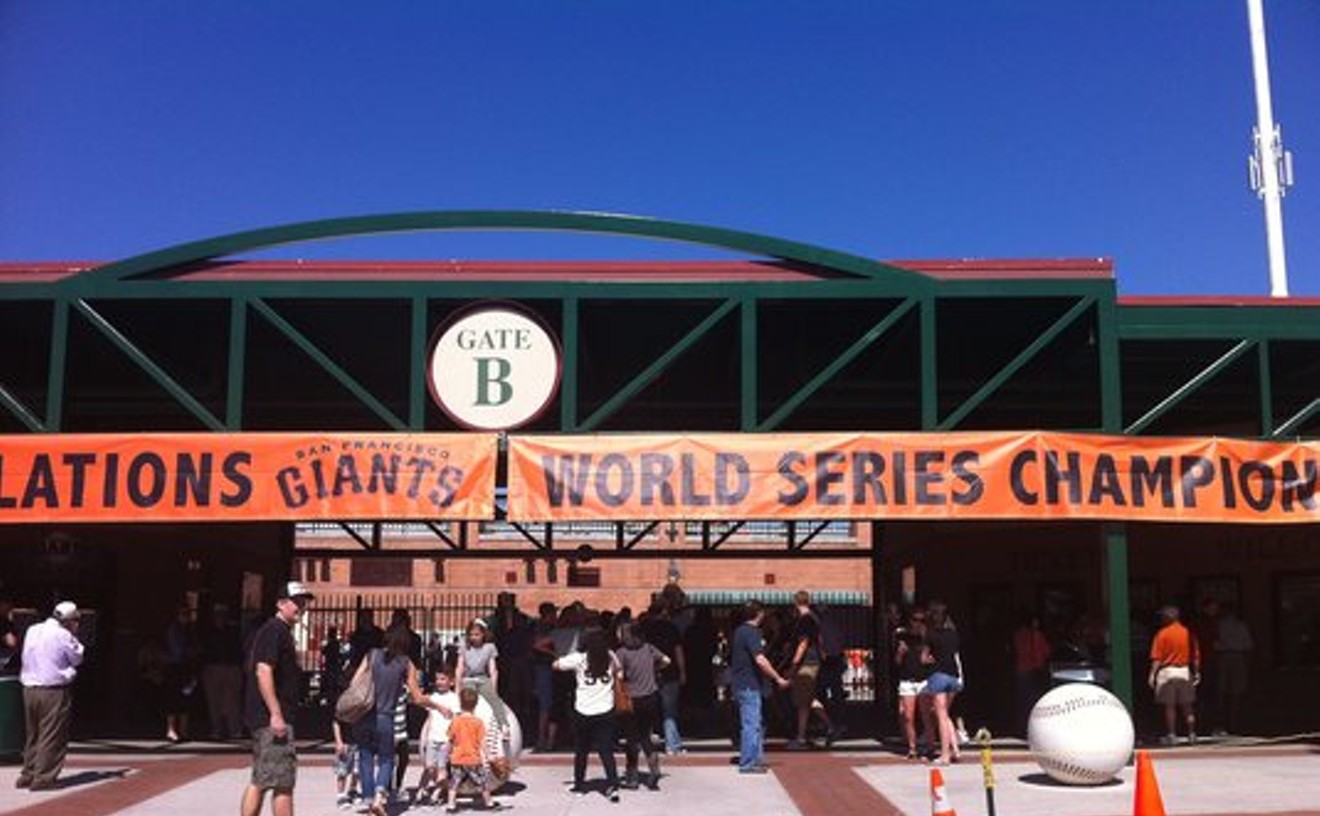 We feel the need to say that all the stadiums used by Cactus League teams are nice. We have no major complaints about any of 'em. But, there's a big difference between "nice" and "best," and a couple of key elements make Scottsdale Stadium just a little bit better. Start with grass in the outfield and a nice view of the mountains from the seats. Mix in the fact that it's located in the heart of downtown Scottsdale, walking distance from dozens of bars, restaurants (we like to eat off our beer buzz at Los Olivos, which is only a block away) and hotels. As a fellow baseball-loving friend says, Tempe and Mesa stadiums are nice, but look at where they are. Yeah, there's nothing there. So though you might pay a little more for your seat in Scottsdale (typical . . .), you can take comfort in knowing you're paying for the best. And the VIP area here has its own little scene going on. It may have pretty much nothing to do with watching baseball, but it's fun. It will cost a bit more, too — unless you're tricky. We know a guy who managed to make himself VIP for an entire season without spending a dime. But we can't disclose his secret. You gotta figure that one out on your own.

Not so long ago, a ticket to a Sun Devils b-ball game had all the value of Confederate currency circa 1866. But those were the dark days when the Devils were the perennial lapdogs of Lute Olson's Arizona Wildcats. The worm began to turn in 2006, when the hopeless Rob Evans was replaced by Herb Sendek, late of the North Carolina State Wolfpack and the mighty Atlantic Coast Conference. Sendek was the ACC Coach of the Year in 2004, which is kind of like saying that, for one shining season, he was the best college basketball coach on the planet. By all rights, he should have pocketed the equivalent Pac-10 hardware for 2007-'08, when he took the new-look Devils to a 21-13 record, a berth in the National Invitational Tournament, and two — two! — wins against UofA. Suh-weet. The '08-'09 squad may yet net him the award — and, much more important — a berth in the NCAA tournament, because Sendek's two top players, phenom guard James Harden and team anchor Jeff Pendergraph, rejected early entry into the NBA to return for one more campaign. As for you, dear bandwagon-jumper, you're the beneficiary of the Devils' many moons of mediocrity. Wells Fargo Arena single-game tickets start at about the cost of a Starbucks Mocha Valencia. Behind-the-bench courtside? They can be had for as little as $20. You just have to try a little harder to get 'em than you used to.

Ours is a basketball town, and our WNBA franchise is the first pro-basketball team in Valley history to bring home a world championship. Ponder that for a sec. The Phoenix Suns have been scratching and clawing for 40 years, but a gang of burly chicks that's barely a decade old steals their thunder.

That's gotta sting for Steve Nash, the Big Cactus, and crew, what with their still-throbbing pride from that first-round playoffs ouster last April. For the rest of us, not so much. We here in Phoenix just like a winner. We don't care who it is, or what they do. If there's a "W" in there somewhere, we're all for it. Makes our chest swell up real nice.

It's even nicer when we can wallow in victory at a nice price, and the Mercury have always offered a square deal. Pro team, check. Led by a superstar who transcends the limited appeal of her sport (Diana Taurasi), check. Ten bucks for a decent view at one of last summer's Mercury games. Check.

Ten bucks? Hell, that's what a beer with a decent buzz costs at a Suns game.