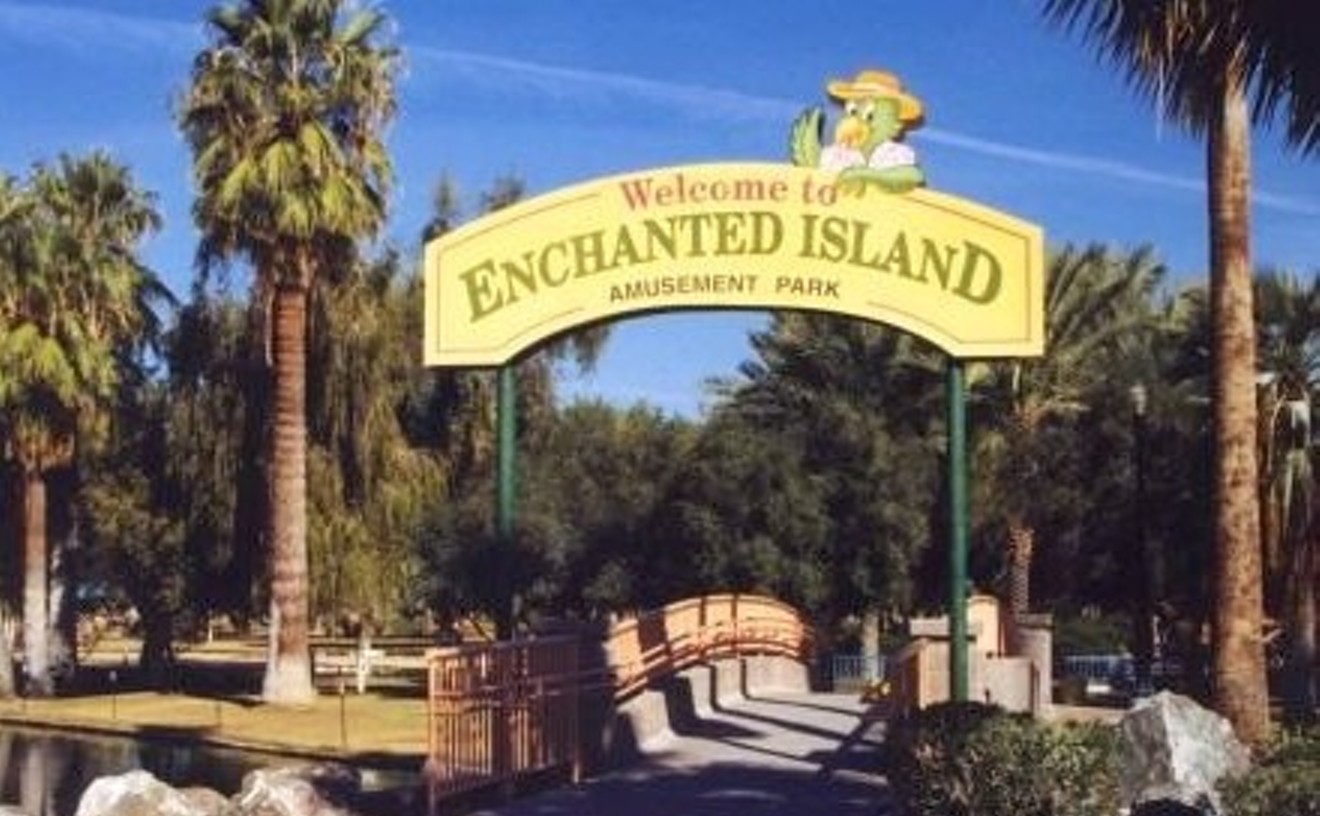 Kids seem so appealing on paper. Someone to carry on the genetic line, to worship you like a god (until they're 5), to support you in your dotage. In practice, at about noon on any given Saturday afternoon, with the weekend yawning eternally in the distance, the attraction starts to wane. This is why a lot of very smart people got together and created the parent-saving marvel called the diversion. This comes in many forms, from the newly installed splash zone at the neighborhood pocket park (your tax dollars at work) to the off-the-grid theme birthday party (reference the S.S. Titanic bash in the flick Keeping Up with the Steins).

Our favorite way to pass the hours is a trip to Enchanted Island, the Encanto Park landmark that's been diverting desperate parents for years. Besides being situated in the great outdoors and having nothing whatever to do with video games, the Island boasts nine kid-pleasing attractions, including the restored, 1940s-vintage Encanto Carousel, the C.P. Huntington mini-train, the Dragon Wagon rollercoaster, the Rock 'n' Roll teacups, bumper boats, a parachute drop, and the Red Baron airplane ride.

The gem at this place has got to be the vintage carousel. Constructed by the Allan Herschell Company in 1948 and dubbed "Little Beauty," this majestic merry-go-round was saved from the scrapheap after the demolition of the original Kiddieland theme park in the late '80s, thanks to the efforts of a group of locals who pooled their money and their efforts to purchase the carousel and restore it to its original magnificent majesty. Good job, people. Go for a spin on us. 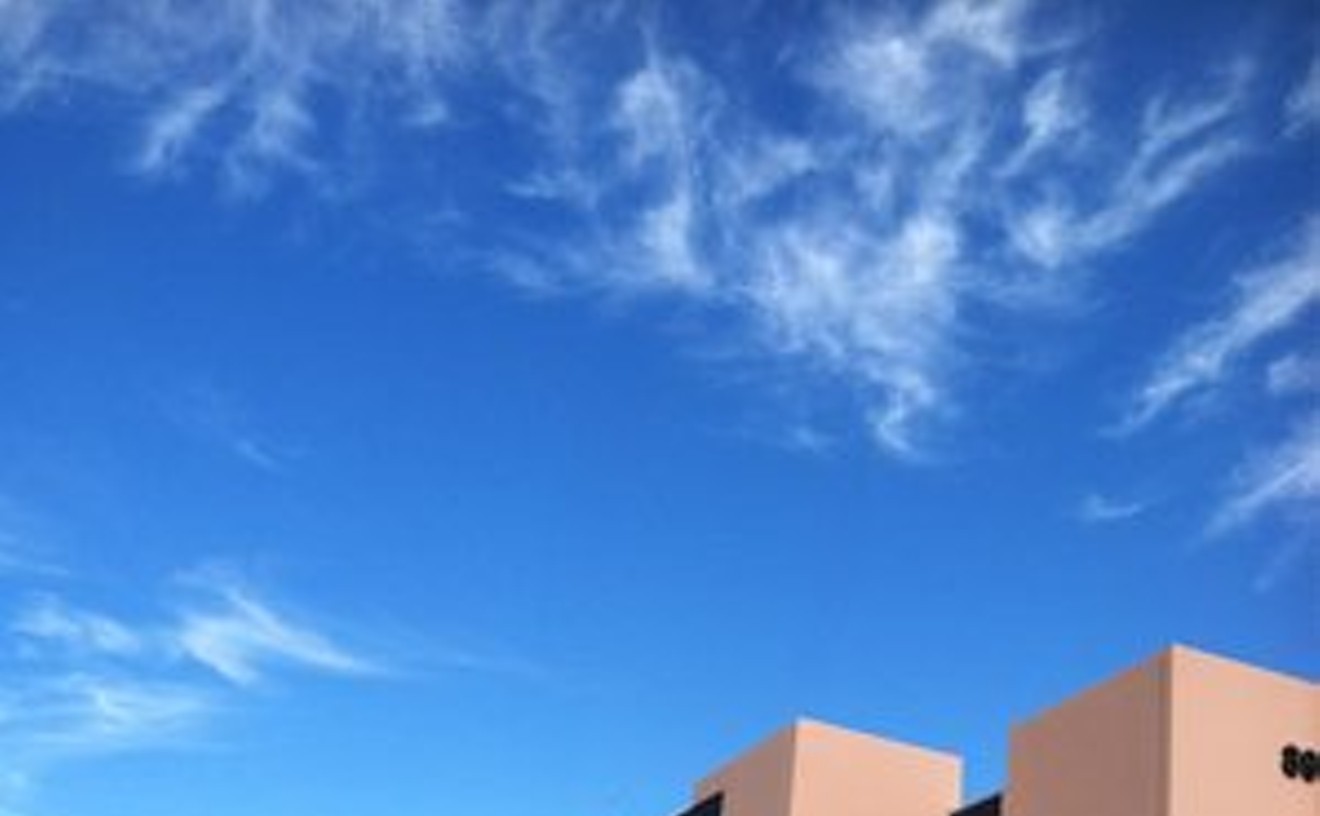 Got an itchy trigger finger, ace? The high-caliber staff at Shooter's World knows just how to scratch it. If you're not packing your own piece, this west-side pistol palace can let you exercise your Second Amendment rights with firearm rentals available for $10 for the first handgun, $6 for each rental after that (shooters must be 18 and over to rent rifles and shotguns; 21 and over to rent handguns). Once you're locked and loaded, take aim in any of the facility's 24 indoor lanes, which are available for $14 per hour, per person, and are perfect for you to play Dirty Harry with the three kinds of targets available. If you don't like the standard bull's eye or silhouette targets, try taking aim at a photo target of your choosing, including that rat bastard Osama bin Laden, a menacing mugger, and even a little old lady wielding a shotgun. Who knew they had armories in Sun City? 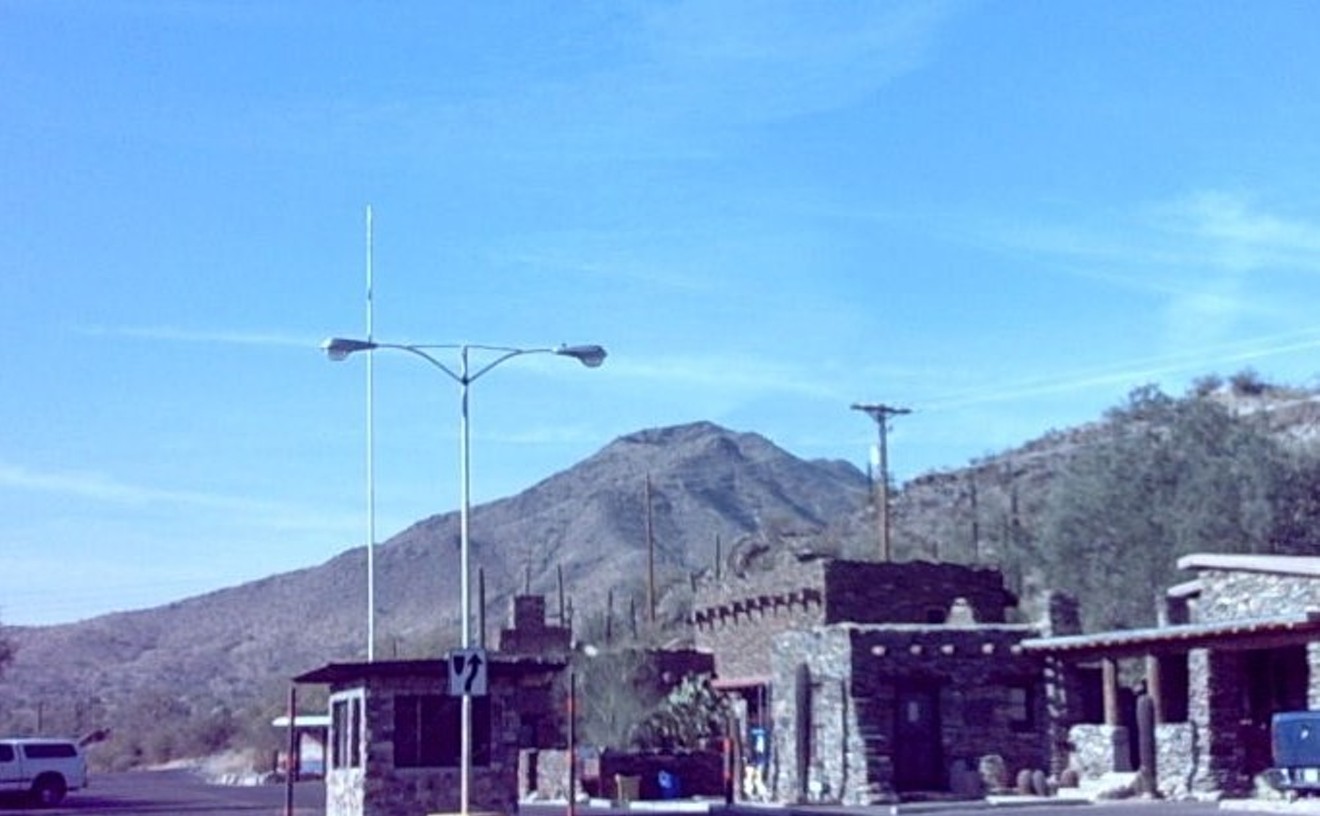 Mountain biking at night seems crazier, in theory, than it actually is. Just as in the daytime, it requires zooming up and hurtling down steep dirt tracks, all the while flanked by cholla cactus and pointy boulders. It sure isn't any safer at night, but it's not as risky as you might think if you have a burly lighting system. A while back, we threw down for an expensive Niterider 15-watt lamp with a rechargeable battery, but we got our money's worth out of the gadget.

Our night fun hunting ground is Desert Classic trail, a nine-mile-long dirt roller coaster that hugs the southern foothills of South Mountain. Full disclosure: At night, we mostly ride the trail from the parking lot at the Pima Canyon entrance to the big, white water tanks about three miles in. Though there are a few tricky dips into dry arroyos on this section, the trail up to the tanks is well worn, without many rocky, technical parts. Desert Classic at night isn't the crowded highway it is in the day — on warm summer evenings we're often the only ones out there. Not that we're alone: Sometimes the coyotes come out to play. Once, one of the mangy mutts trotted to less than five feet away as we stood next to the trail, adjusting the iPod. As the light passes over a dark stretch of single-track, we'll also spot the occasional mouse, rabbit, or rattlesnake. Yes, rattlesnakes — that's on top of all the other objective dangers, such as hitting a rock you didn't see because it was, well, too damned dark. But there's one other thing we like about Desert Classic for night riding: If something bad happens, civilization is just a hop, limp, or crawl away. 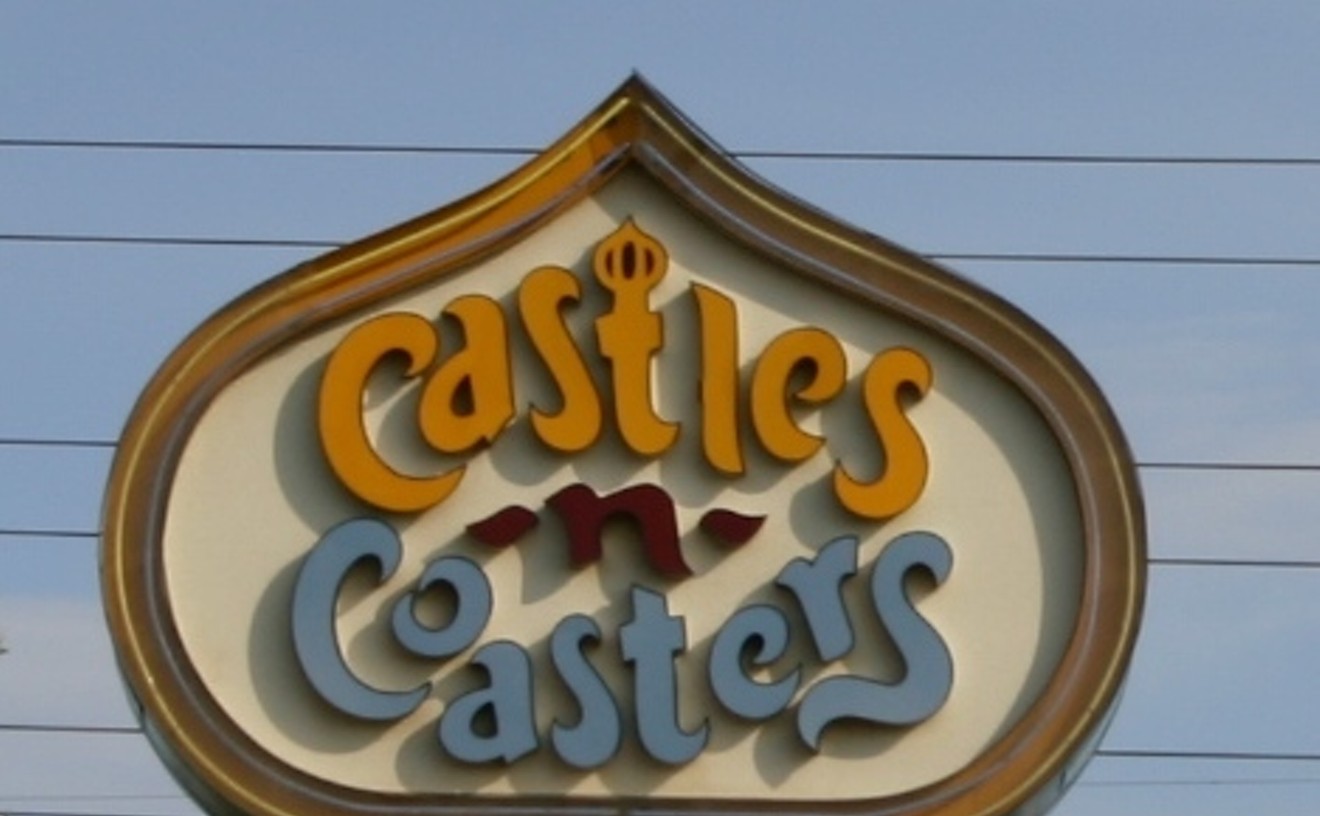 It's confession time: We indulged in a rather nasty bout of road rage the other day, and it wasn't pretty. Our dirty driving deed went down after some schnook sideswiped us rather abruptly, causing our blood to boil. Instead of declaring, "Live and let live," as any sane person would've done, it was decided that a little roadway revenge was in order. We proceeded to floor it, T-boning them straight into tomorrow, and setting off a six-car pileup. Uma Thurman in full-on Kill Bill mode couldn't have plotted better payback. And the only reason that we're not cooling our heels in a jail cell right now is because this vehicular vengeance involved the bumper cars of the Ram Rods ride at Castles -n- Coasters instead of automobiles. You, too, can unleash your own personal demolition derby, driving like a maniac behind the wheel of the electric-powered coupes and fitting in as much smashing and crashing action as possible during the 10-minute experience. Single rides are $5.50 each on weekdays before 4 p.m. (prices increase in the evening and weekends, as well as for unlimited ride passes; call for rates), leaving you plenty of green to cover the chiropractor bills for your whiplash.

Best Chance to Drink on the Go

Running is one of the most physically exhausting activities one can engage in: Your feet are punished, muscles taxed, and electrolytes drained. Usually after a jog or a sprint, it's recommended that one replenishes one's burdened body by drinking ample amounts of liquids. If you're the average sort of runner, that means many thirsty gulps of water or sports drinks like Gatorade. But for members of the Valley's chapter of the Hash House Harriers, the fluid-replacement regimen consists of imbibing beverages with plenty of hops and barley. Self-described as a "drinking club with a running problem," the HHH holds numerous noncompetitive runs each month, where participants maneuver along haphazard four- to six-mile paths through both rural and urban environments created from chalk or flour. These events feature frequent pit stops along the way, where chugging contests, "beer checks," or other drinking distractions ensue in order to emphasize fun and equalize things between the more casual runners and those who're hoping to compete in the Boston Marathon (as some HHH members have done). It brings new meaning to the phrase "beer run."

To win the prestigious Tour de France race an astounding seven years in a row, cyclist Lance Armstrong endured seven grueling treks lasting more than 20 days and 2,000 miles each. It was a triumph of heroic skill, athleticism, and willpower, demonstrating that man can conquer any challenge set before him. But as epic as his victories were, we found it far more entertaining watching a bicycle battle like last year's Dagger Death Race. Held on the Saturday before Halloween, the gonzo contest organized by a local crew of BMX riders featured more than 40 cyclists (many wearing costumes) racing around Tempe and Scottsdale in a quest for two-wheeled supremacy.

The over-the-top event was an "alleycat," a type of urban cycling race developed by bike messengers that involves participants maneuvering through a series of checkpoints through a city. Alleycats are big in cities like San Francisco and Portland, and have caught on across the Valley in the past few years, usually featuring a number of riders on fixed-gear bicycles (single-speed and often brakeless two-wheelers that have also gotten popular recently). Outrageous tasks are a frequent part of checkpoints at events, and the Dagger Death Race was no different with its stops. Riders had to succeed at such challenges as spinning around with their head planted on a baseball bat, digging chicken bones out of a pail of dirt, or drinking either beers or shots of hot sauce. Alleycats occasionally feature some lawless riding, like one rider who took his bike on Loop 202. A second race is in the works for this year, and promises even more mayhem. Let's just hope the cops don't spoil the fun.

It's time to face some hard facts. You're never, ever gonna be cast as a contestant on The Amazing Race. No matter how many times you mail in your cute and clever videotape, the producers of the Emmy-winning CBS reality show (which involves a global scavenger hunt and race for $1 million) aren't going to be calling you back anytime soon. After swallowing that bitter pill, soothe your uncastable ass by signing up to compete in the Great Urban Race. Similar to its televised cousin, the competition (which usually goes down each spring in Tempe) involves teams of two or four who decipher clues and complete a number of odd tasks (such as finding a particular political candidate's campaign sign) in order to maneuver through a series of citywide checkpoints and cross the finish line first for cash and prizes. Teams are encouraged to come in costume to add to the zaniness of the event (such as a pair who dressed as Super Mario Brothers this past year). The prizes aren't as big as they are on TV, and it might not be the same as jetting off to South America, but it's still pretty damn fun.

Situated in the Coronado historic district is this spacious, urban park with two lighted basketball courts. One slab of concrete usually has families and kids playing around while the other one features fast-paced pickup b-ball. A men's league (complete with referees and a scorer's table) reserves one of the courts on Monday and Wednesday nights, but some teams are often short of players, so just ask to run with them and they'll most often let you join in. Park hours are from 5:30 a.m. to 10 p.m. 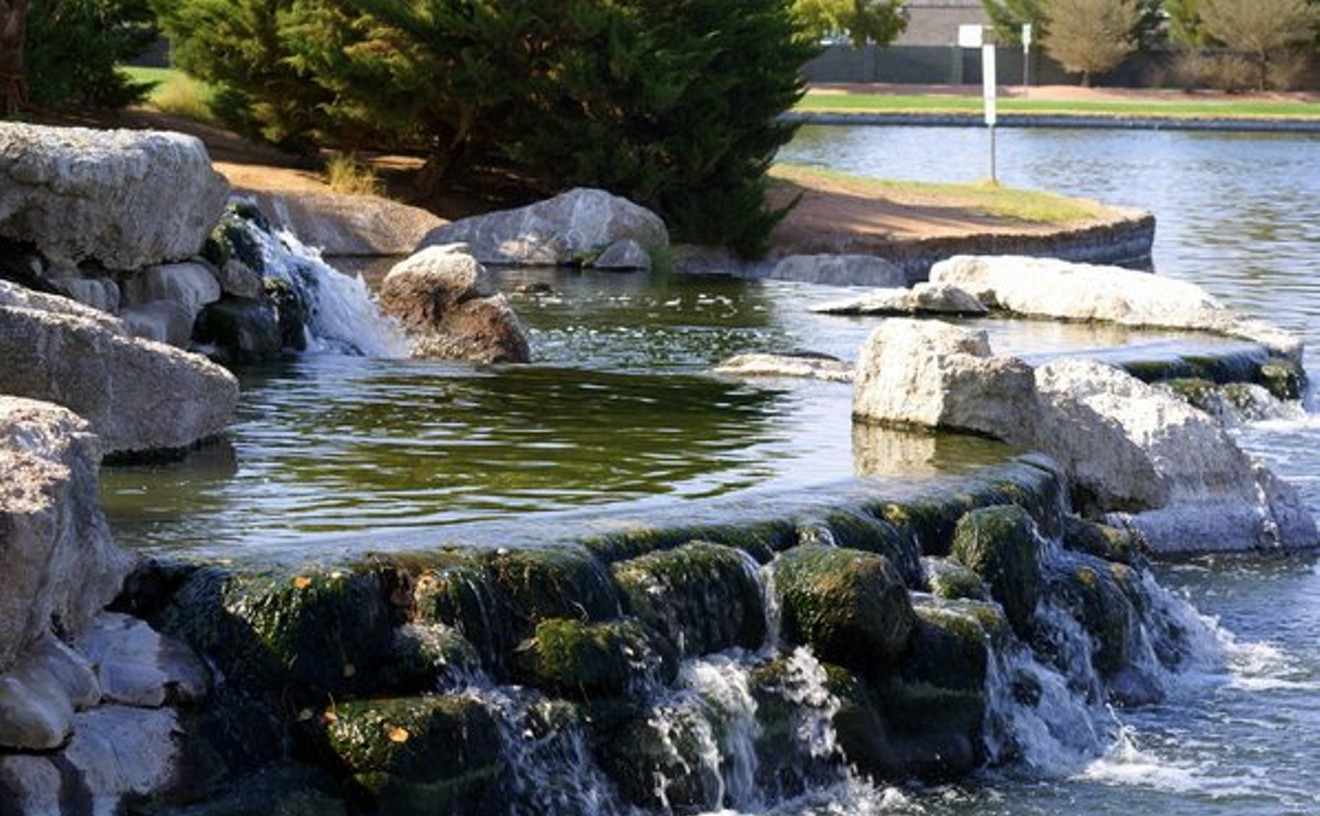 Nestled at the east end of this 65-acre park are four regulation-size, rim-rocking basketball courts with some of the most competitive games around town. Each court is lighted for nighttime hoopin', and the lanes are painted purple and orange (an ode to the Phoenix Suns), which kind of makes you feel like a pro. If you get tired of balling, then there are plenty of other super-fun activities, such as batting cages and a skate park as well as chill-out spots by the man-made lake. Park hours are from 6 a.m. to 10 p.m.

Sueño, a Spanish word for "dream," is exactly that when it comes to pickup BB at this west-side park. Students and alumni from neighboring high school basketball powers Trevor Browne and Carl Hayden flock to the lighted courts, which makes for some serious games. The park is infamous for hosting games with the ankle-breaking skills of the Brown family — most notable is professional basketball player Gerald Brown, who suited up with the Suns for a season. Hours are from 5:30 a.m. to 11 p.m.