Cyphers: The Center for Urban Arts 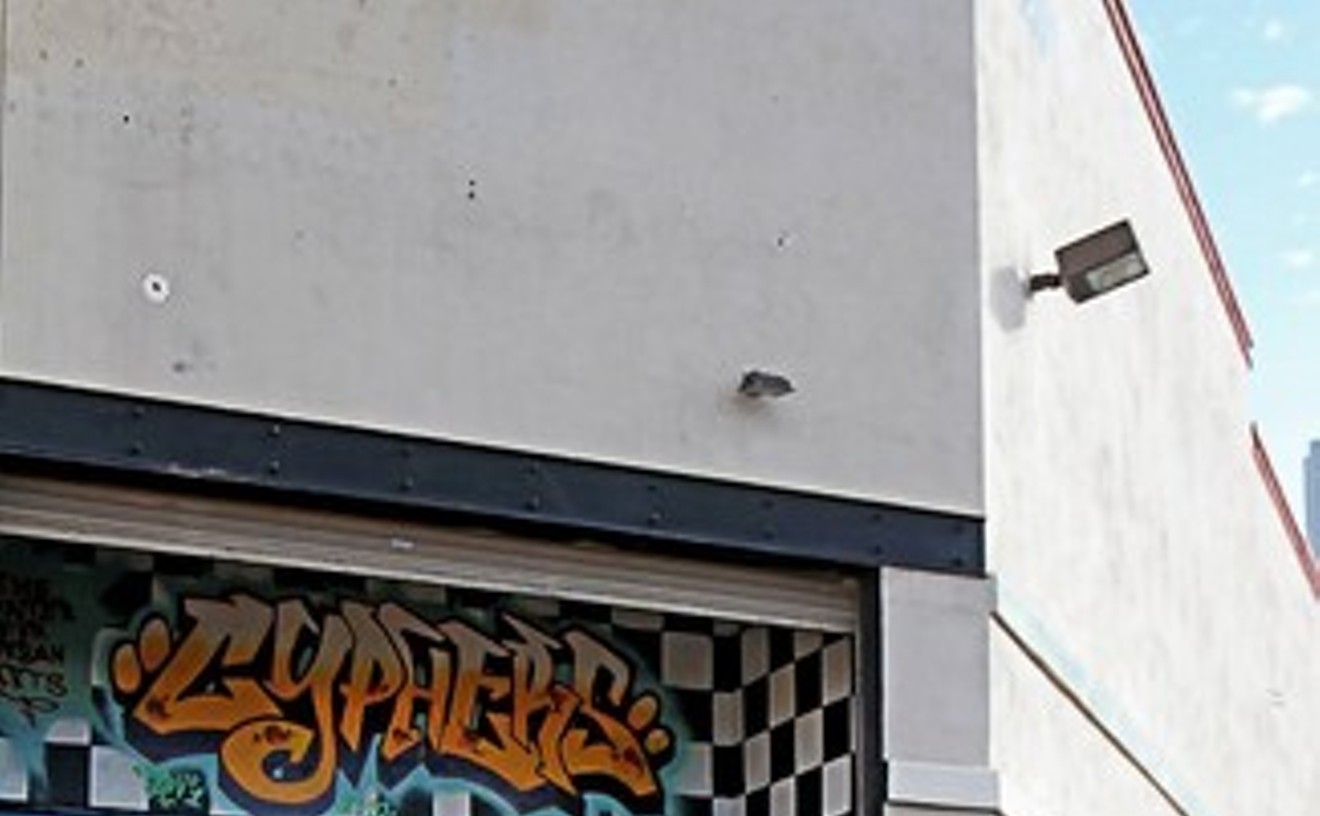 Hip-hop culture is nothing if not chameleonic, having constantly evolved and reinvented itself over the past 40 years. But no matter how much it's changed, hip-hop essentially boils down to four basic elements: MCing, b-boy dancing, turntablism, and graffiti artistry. And at Cyphers, you can get schooled in each and every one of 'em. Since opening in January, proprietors Danny "Scooby" Morales and Edson "House" Magaña (both are veterans of the dance collective Furious Styles Crew) have instructed Valley youths in the aforementioned urban art forms, as well as providing studio space in which to practice their burgeoning talents. While Morales and Magaña oversee most of the dance workshops — ranging from b-boy basics to the fancier footwork of krumping and jerkin' — various local turntablists, MCs, and graf crews are brought in to teach classes. But in addition to learning can control and spray technique from Mario "Durok" Alvarez or how to scratch a record from DJ Reflekshin, students are taught respect for each other and their art form, as well as the history involved. After all, there's more to becoming an MC than just learning how to spit fresh rhymes. It's like the godhead KRS-One once said, "Rap is something that you do, hip-hop is something that you live."

The predictability of FM hip-hop stations is much bemoaned (yeah, we need to hear that Rihanna/Drake collab one more time), but the staff at Power 98.3 have achieved a delicate balance: blasting out the hits that Top 40 listeners want to hear along with daring programming like Magic City Radio in the mornings (featuring Latino rap superstar MC Magic, minus his vocoder) and Power Mix on weekends, when DJ Class, M2, and DJ Tyger go old-school on-air, mixing modern hip-hop standards with classics and deep cuts. It's the sort of soundtrack you might hear at a killer club (but you can listen to in your underwear) and the kind of live, fresh content that is so sorely lacking from commercial radio.

Who needs Tim and Willy? (Well, neither of the Valley's big country radio stations, apparently.) KNIX 102.5 FM's morning guys, Ben Campbell and Matt McAllister, have been holding down the fort for several years now, while KMLE 108 FM continues to shift through hosts for its morning show. In a time-slot that's been the basis of competition between the two stations for quite some time, Ben and Matt are now kings, especially since they're no longer in competition with their predecessors. For the kicker, KNIX still has Barrel Boy, who may just be the most iconic figure in Valley country radio right now. Sure, his most useful role is being the hefty dude who wears a barrel in public, but he's been a staple at big-time country concerts and other events in the Valley for some time now. The difference in programming between the two big country stations may not be huge, but personality still matters.

Simply put, KWSS is the last man standing. When X103.9 (formerly and still colloquially referred to as "The Edge") evacuated the FM dial, it left many listeners wondering where to turn for alternative rock programming. More than a few found their way over to KWSS, a low-power free-for-all station. You can hear the station pretty much anywhere within Loop 101 (the station broadcasts at 100 watts, the max allowed by a low-power station, as mandated by the FCC). While the station shines most during its specialty shows — The Morning Infidelity, Erratic Radio!, Mostly Vinyl, Driving with Gass — the station's wildly random rotation will veer from Phoenix darlings like Mergence and Snake! Snake! Snakes! to national acts like Cage the Elephant or vintage college radio fare like The Church. You might not always like what you get, but you're frequently surprised, something Valley listeners long had given up on.

The Valley's radio dial is cluttered with a glut of megawatt stations broadcasting timeless rock 'n' roll hits and AOR chart-toppers from yesteryear. Here's the rub: None of these stations can hold a candle to KCDX. Despite boasting million-dollar promotion budgets, superstar jocks like Alice Cooper, and bumper stickers on half the cars in the Valley, classic-rock powerhouses like KDKB or KSLX pale in comparison to this automated radio station run out of Florence that covers only 60 percent of the Valley. Why? Per the wishes of enigmatic station owner Ted Tucker, KCDX offers neither DJs nor commercials to annoy listeners. Rather, the station airs a near-continuous stream of tracks unheard elsewhere in local terrestrial radio. Tucker programmed his station with a format similar to the free-form radio stations popular in the 1960s, when the song selection was not beholden to singles or the whims of advertisers. Instead, huge amounts of deep album cuts and rarities from some of the most influential artists in rock 'n' roll history — including the likes of Nick Lowe, Lee Michaels, and Gary U.S. Bonds — are hewn from Tucker's vast music collection and mixed in with chart-toppers from such hitmakers as Average White Band and Elton John. Keep on rocking, Ted. We'll be listening.

Make all the jokes you want about old folks going to bed early, but Arizona Gold KAZG 1440 AM does stop transmitting at sundown, handing over the reins to Korean gospel radio. But the daytimer station comes back with the morning sun, cranking out doo-wop, soul, pop, surf, and rock hits from the '50s and '60s. There's just something about hearing Jan and Dean with a touch of amplitude modulation hiss that feels great, and the 14-in-a-row playlist doesn't hurt, either. You might hear a couple of repeats, but it still beats the commercials and ever-encroaching "new music" that dominates the other side of the dial. The classics have a place on the radio, you know, as does, um, Korean gospel.

Let's make it official: There's a high-water mark for good radio in Phoenix, and that's when a song is so good you turn the key in the car and sit there waiting for it to finish. It's rare — it's hot here, after all — but that's the kind of music KJZZ plays at night in between the NPR market reports and BBC news updates, the kind of music that makes you stop for a second, that forces your attention. It can be catchy, like the Indian blues of Donald Harrison, or it could be something still and moving, like Oscar Peterson's take on Duke Ellington's "In a Sentimental Mood." It's this kind of programming we love KJZZ for — not to mention the solid five hours of killer blues on Sunday night — and it's this kind of programming we wish they gave us more of, the kind of sounds worth sitting in the sweat box for.

Longtime Phoenicians may raise an eyebrow when you tell them you're jamming the new Black Keys single on KUKQ, but forgive them their suspicion. The old KUKQ — which spent time on the AM and FM dial — went off the air in 1996, but this year former and current staffers of the dearly departed X103.9 and Sandusky Radio banded together to launch an online homage to the original, flying the rebel flag of freedom from FCC and Clear Channel mandates high. The programming, which ranges from pop-punk to underground rap to EDM and local specialty shows, doesn't stick to the kind of playlists and rules that bind the FM dial. It takes a little smartphone savvy to bring the station with you in the car, but if the doomsayers proclaiming the end of terrestrial radio are right, a familiar name in the vast world of Internet radio can't hurt.

When X103.9 morphed into the adult contemporary My Phoenix Music, the question on everyone's mind was what would happen to Craven Moorehead — the longtime punk jock who made The SkaPunk Show (in all its time slots and incarnations) a standard on the station since taking over the show's reins from Larry Mac in 1997. Moorehead took to the Net, first hosting SkaPunk Radio on his own site before teaming with KUKQ's Internet stream. Moorehead's familiar voice — friendly but not afraid to take potshots at disposable pop — and punk taste may be missed on the FM dial, but he's brought a sense of professionalism and levity to the world of Internet radio. Plus, he can swear whenever he feels like it.

The name Jonathan L is a familiar one to anyone who's paid attention to the history of the Arizona FM dial. A longtime radio presenter, writer, and promoter of all things cool, L. is most famous for his stints at KUPD, KUKQ, and KMFA. L. broadcasts from Berlin these days, but it was a high priority for him to get his latest show, The Lopsided World of L, on the FM band in Phoenix. The show airs at 10 p.m. every weeknight on KWSS, and you're as likely to hear some strange German industrial grind as you are classic tracks by L's pal Frank Black of The Pixies (L. provides some DJ narration on Black's latest disc, as Grand Duchy). It's not a Phoenix-centered show, but hearing that voice on the dial is certainly a nostalgic treat (that comes bearing brand new musical gifts).