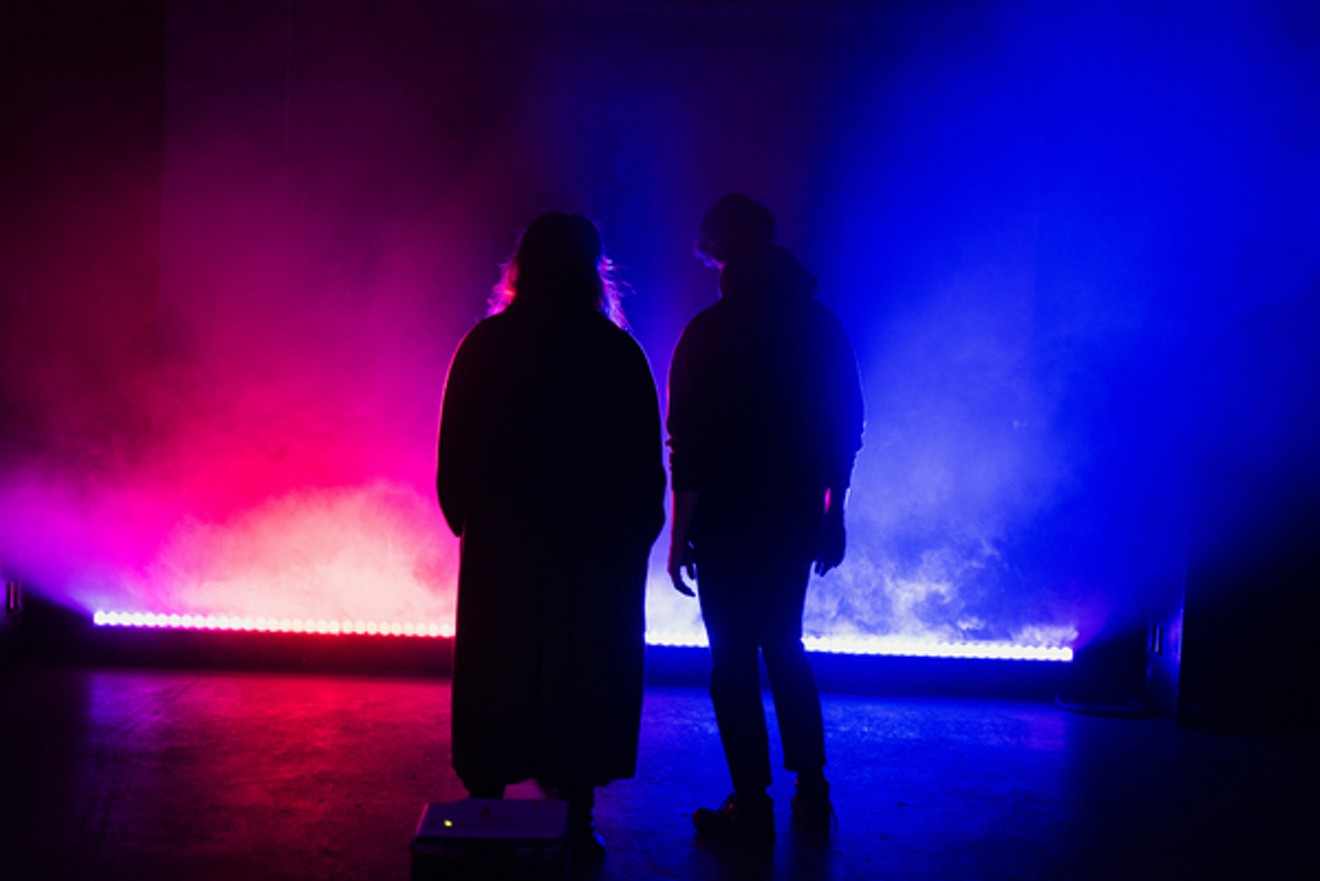 Shawn Brackbill
The first time Beach House played in Arizona, it was at Modified Arts. They weren’t touring with the augmented lineup they’ve taken on the road in recent years. On that evening in 2007, it was just Victoria Legrand and Alex Scally playing together.

Performing a hushed set to a crowded room, the pair were cast in silvery light reflecting off a pair of palm tree-shaped balloons floating on each side of the stage. They looked like the perfect rinky-dink prom band, sprung from the brain of a lovesick teen who had just spent the evening binge-watching John Hughes movies. Watching them nervously play “Master of None,” it’s unlikely anyone there imagined Beach House would become one of indie rock’s most enduring groups — a band who would inspire the names of TV shows and whose songs would become the backbone of rap bangers.

Whether it’s De La Soul sampling a “how to learn French” instructional record or Kanye West repurposing King Crimson, inventive samples are a hallmark of rap music. Even by that standard, though, hearing the languid dream pop of Beach House cropping up in rap songs can elicit a double-take. It’s as unexpected as a rapper from the ’90s lifting hooks from Talk Talk albums. You’d have to travel to some parallel universe to hear Puffy or the Wu dropping hard bars on top of “Happiness Is Easy.”

But you don’t have to go dimension-hopping to hear Kendrick Lamar rapping over Beach House. On “Money Trees,” Compton’s favorite son spins a knotty tale of hustling and survival over a shimmering loop of “Silver Soul” put together by producer DJ Dahi. Like the best kinds of sampling, it recontextualizes the original song, giving the Teen Dream track a harder, mournful edge.

The Weeknd also made significant use of Beach House’s music on his 2011 debut mixtape House of Balloons. The Weeknd and Jeremy Rose sampled the prom king and queen of dreampop twice on co-productions: “The Party & the After Party” revolves around a “Master of None” sample, while “Loft Music” uses Devotion’s “Gila” as the soundtrack for its snapshot of pill-addled debauchery.

On Beach House’s latest album, they seem to tip their hat to that rap following. Released in June 2017, B-Sides and Rarities collects odds and ends from the band’s career. Because of how consistent they’ve been, most of the tracks sound like they could have been released at any point in their career. There are quite a few standout songs (including a sweet cover of Queen’s “Play The Game”), but the one that’s most surprising is a remix of “10 Mile Stereo.”

Dubbed a “Cough Syrup Remix,” this alternate version of one of Beach House’s most famous songs slows down to a blurry, druggy slur. While Legrand’s voice is mostly intact — not warped beyond recognition like most chopped-and-screwed vocals — the music itself sounds like it’s under the influence. Whereas the original song is cleanly produced, each element of the tune easy to discern and crystal-clear, the “Cough Syrup Remix” is a swirling haze. It’s like trying to look into a room full of blunt smoke. All you can see are dark shapes.

Considering the primacy of “syrup” as both a subject matter for rap songs and as a style of production, the remix is almost certainly inspired by modern rap. But another surprising facet of the band’s sound is revealed by listening to the remix. Listening to Legrand’s voice float above that molasses-thick blend of noises points to an oft-unacknowledged influence on the band’s sound — doo-wop.

For a group that could pass as the photo for the encyclopedia entry of “White People Music,” they have a deep sonic connection with an older strain of black music: the ethereal, slow, lovelorn voices of doo-wop. Perhaps that’s one of the reasons why the band’s music is a popular choice for sampling: There’s a recognition of some faint ancestral connection between genres.

You can hear echoes of The Platters and The Flamingoes in Beach House’s slow, daydreaming instrumentals. Legrand’s vocals hang over the music, like a balloon whose string is held by the rest of the band.It echoes doo-wop’s aural structure.

That connection is one of the most powerful threads running through the band’s impressively unified body of work. Over the course of six studio albums and the aforementioned compilation, the duo has maintained a doggedly consistent sound and aesthetic. Grantland aptly described Beach House’s music as “a lullaby played on a music box the size of a high school gym.” It’s put-your-head-on-my-shoulder music, somber and blissful dream pop that captures the mood of doo-wop classics like “I Only Have Eyes For You.”

There are occasional tweaks to the formula, like Depression Cherry’s standout track “Sparks,” which rewires the band’s music box into a dissonant noise machine. But most Beach House tracks share the band’s essential ingredients: Legrand’s airy voice swooning over a bed of layered keyboard and organ sounds. It’s profoundly unaggressive music. Blasting Devotion or Bloom at full volume is more likely to inspire a cuddle puddle than a rager.

Which is why it’s fascinating to consider what strange bedfellows Beach House and rap music make. You’d be hard-pressed to think of another indie group of their stature that’d be less appropriate. Aside from the band’s twinkling sonics, they’re notoriously averse to commercialism. While the band have signed off on Guinness beer ads and soundtracking the occasional episode of New Girl, they’ve also turned down lucrative advertising opportunities from big brands because they thought it was antithetical to their music. Case in point: the band’s 2012 kerfuffle with Volkswagen. The car company used a soundalike version of “Take Care” for a commercial after Beach House turned them down.

These aren’t the kind of sentiments you hear in rap, a genre that prides itself on self-promotion, moving units, and industry dominance.

Despite philosophical differences, groups like Beach House have been a ready source for compelling samples for rap producers. Another group with an aversion to commercialism, The Chromatics, had their song “Cherry” become the bedrock for the ScHoolboy Q’s hit “Man Of The Year.” Danny Brown worked with Purity Ring. Future sampled Arcade Fire for “Might as Well.” Even Rihanna got in on the crossover action by recording a Tame Impala cover on her last album. Hell, it’s hard to imagine Drake’s transformation into the king of sadboy rap without the musical blueprint of The xx to show him and producer Noah “40” Shebib the way. (The xx would later return the favor by sampling Drizzy on “Naive.”)

While other bedroom pop artists have become prime targets for rap producers searching for gold sounds, few indie acts seem to slide into the boom-bap of rap tracks as smoothly as Beach House do. And while their languorous music complements whatever track it’s featured on, the band’s distinctive sound can’t be mistaken for anything else.

It’s like Bruce Lee’s adage about the power of water to reshape and preserve itself no matter what it’s poured into.

On that night, a decade ago at Modified Arts, Beach House were already fully realized. They weren’t trying to find their sound. Playing in the glow of floating palm trees, the performance was small but sweet. That dreamy sound wasn’t big enough for Coachella, car commercials, and the Weeknd. But it soon would be. It’s like Legrand sings on “Take Care”: “It’s no good unless it grows.”

Beach House are scheduled to perform on Sunday, September 24, with Fleet Foxes at Comerica Theatre. Tickets are $41 and up via Live Nation.