La Ineditá is scheduled to perform on Saturday, May 13, at Valley Bar. Arnold Loli
Y’all really should get outta the house this weekend. Seriously. We’re in the final stretch of reasonable weather before things really get rotten for the next few months. Plus, there are plenty of events happening around the Valley.

And, yes, that includes a bunch of “can’t miss” concerts.

Here are some of the highlights: Jazz legend Ron Carter, who’s played bass alongside countless greats during his storied career, will be at The Nash. Elsewhere in downtown Phoenix, the epic movie scores of composer John Williams will be celebrated, and popular alternative Latin night Clandestino! will make its return and feature two notable bands, La Inédita and La Diabla.

There are even more music events over the next several days, which you can discover for yourself by checking out our online show listings or our rundown of the best concerts happening this weekend.

Guitar virtuoso Robin Trower.
Neil Calandra
Robin Trower
Friday, May 12
Talking Stick Resort in Scottsdale
Robin Trower, who came into prominence with British psych/progressive and outfit Procol Harum and recorded on the first five rather exquisite albums of their catalog, was not the same guitarist who actually recorded their biggest and best-known single, “A Whiter Shade of Pale.” That distinction went to original guitarist Ray Royer, who stinted with the band in 1967. Trower would lend his licks and vocals from '67 through when he would depart to pursue a solo career. Now 71 years old, Trower has not completely severed ties with his former mates, recording the 1991 album The Prodigal Stranger and appearing on the orchestrated compilation album The Long Goodbye in '95. On his own, he's maintained a steady recording profile, reverting to blues rock with the power and wit of his prog days. Abel Folgar

Metal band Sabaton.
Severin Schweiger
Sabaton
Friday, May 12
Marquee Theatre
When a band is named after a knight’s foot armor, you can probably bet on two things: It’s either a power metal or Swedish. Enter Sabaton. Lyrical content focused on war (particularly WWI and WWII) and historical battles make up the majority of the band’s music. Seven of the band's albums are all about these themes, while the final tracks pay tribute to legendary and influential metal bands. So it makes sense that, in 2012, almost all the members left to form a band called Civil War, leaving vocalist Joakim Broden and bassist Par Sundstrom to recruit new members for their heavy international tour gigs. The band is still loved worldwide though, and they host an Open Air Sabaton festival, as well as a Sabaton cruise. Leaves’ Eyes and BattleBeast round out the bill at this Marquee Theatre metal show. Lauren Wise 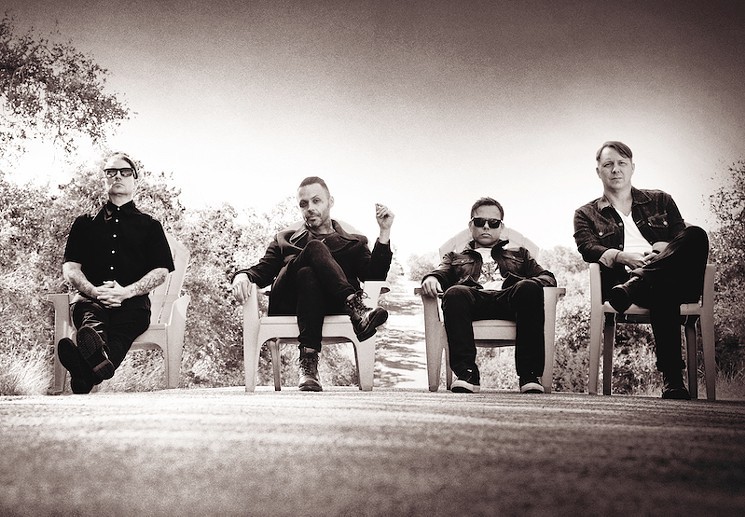 Blue October
Nicola Dell
Blue October
Friday, October 12
Celebrity Theatre
Blue October’s Justin Furstenfeld has entered his 40s with an aggressively joyful mindset. He’s established himself as a husband and a father, and his music has consequently turned another corner to reflect as much. “I wouldn’t say this is a happy album,” Furstenfeld says of Home, Blue October’s latest album. “It’s me saying, 'This is what I want out of life, and I’m going to get it. So just move out of the way if you’re trying to keep me from it.’” His band’s last album, 2013’s Sway, was about rebirth and sobriety. Having learned to walk on his own two feet again, Furstenfeld says Home is about finding inner peace and making the most out of the rest of his life. And his goal is to show fans that he can be just as creative and passionate of a songwriter when he’s in a good place as he was when he was in a dark one. Home is brimming with feelings. But happy songs are an especially difficult variety, because they can come across as bubblegum. Furstenfeld knows this, so instead of just writing an upbeat song, he dove into his happiness, sought out the demons underneath, and wrestled them down. Matthew Keever

Ashley Jones, better known as Treasure Fingers.
Courtesy of Four80music
Treasure Fingers
Friday, May 12
Bar Smith
Treasure Fingers is a moniker that belongs to Ashley Jones, a man who's already had a fair amount of success as part of Evol Intent, one of the jungle scene's premier production outfits in the U.S. Not content to rest on his laurels, Jones has opened up the playbook for his turn as Treasure Fingers. There may be a hint of his drum-and-bass roots, but Fingers' aesthetic absorbs everything and spits out a mind-fucking mélange of a mix, a dance-floor diversion that destroys the lines among wildly divergent styles. Everything and anything is fair game, from Daft Punk and Justice to Architecture in Helsinki and Squarepusher. It's an approach that might make dance-music purists sneer, but goddamn if it isn't a stupid amount of grin-inducing, butt-shaking fun. Britt Chester

Devin Copeland, a.k.a. underground rapper Devin the Dude.
Marco Torres
Devin The Dude
Friday, May 12
Club Red in Mesa
In March, Devin the Dude released his ninth album. If you swear by the melodicism of Devin Copeland, then you already knew this. If you subscribe to his nature as underground hip-hop's greatest, most relatable, eternally high rap yeoman, then you might have missed this bit of information. It happens. Devin will forever be attached to the idea of being underrated. Unlike plenty of his contemporaries who debuted more than two decades ago, the Dude never chased fame. If his rap money covered his weed and beer, he was perfectly fine. His is the kind of calm demeanor you don't see with many a rapper. Curren$y has a lavishness attached to his stoned demeanor, but Devin's lifestyle feels far more achievable. For every rap about sputtering out, he backs it up with a wise tale about getting some ass or smoking the day away. Two years ago, the rudest thing happened to Devin: Somebody robbed him of all his home-studio equipment. He promised fans new material in November, but it never materialized. Instead, Acoustic Levitation, his new album, arrives backed by heavy bass guitars and enough quixotic blues that big-voiced background singers are now back en vogue. Brandon Caldwell


The Music of John Williams
Friday, May 12, to Sunday, May 14
Orpheum Theatre
Composer John Williams has accomplished a lot over the course of his long career. The Juilliard graduate labored as a jazz pianist for several years, composed many television themes, and wrote a number of well-regarded classical works — including a cello concerto performed by Yo-Yo Ma. He has appeared as a pianist and conductor on recordings with Itzhak Perlman and the legendary Boston Pops Orchestra. His fanfare for NBC’s presentation of the Olympics fills the ears of the sports-watching public every two years, and the network’s evening news theme bears Williams’ discernible style. Of course, Williams is better known for his collaborations with former Phoenix resident Steven Spielberg and film director George Lucas. His bass note motif gave the water an ominous feeling in Jaws, he composed a dire march for Darth Vader in Star Wars, and his music underscored the excitement of the adventures of Indiana Jones. Conductor Robert Franz and the Phoenix Symphony will recreate these anthemic scores at the Orpheum Theatre. Williams’ work on the Harry Potter and Home Alone films will likely be covered, but don’t be surprised if his compositions for Gilligan’s Island are overlooked. Jason Keil

Read on for even more great concerts taking place this weekend, including Ron Carter, Teebs, and No Volcano.