Kanye West performs at Coachella in 2011. Denis Jeong Plaster
Kanye West is one step closer to getting onto Arizona’s presidential ballot in November as an independent candidate. On Wednesday, representatives for the rapper submitted nominating petitions with 57,892 signatures to the Arizona Secretary of State’s office, more than a full day before the September 4 deadline.

There are still a few steps left until Yeezy’s an official candidate, though.

The Secretary of State’s staff has to determine if the rapper has enough valid signatures to meet the 39,039 required to make the ballot. And a lawsuit filed in Maricopa County Superior Court earlier this week seeks to disqualify West on the grounds his Republican voter registration in Wyoming precludes him running as an independent in Arizona.

Given his cushion of 18,853 extra signatures and the fact Arizona’s ballots must be printed in less than a week (which might contribute to the suit being resolved quickly), there’s a good chance he’ll make it.

All it took was a legion of 119 paid petition circulators, a half a million dollars, and plenty of footwork to get it done. Over the past two weeks, circulators hit up shopping centers and other public spots around the Valley and throughout Arizona.

They were employed by National Ballot Access, a Georgia-based petition-circulating company. And they reportedly were well-paid for their efforts, getting $8 or more for signatures.

Not everyone was interested in signing, though, especially supporters of Democratic presidential candidate Joe Biden. West’s campaign is widely considered to be a Republican-backed ploy to help President Donald Trump in swing states like Arizona where polls are close. (West admitted as much in an August interview with Forbes.)

It might explain why some paid petition circulators allegedly used dubious tactics to obtain signatures for Kanye.

Some reportedly covered up West’s name on the petitions or gave vague or misleading statements, like the circulator who talked Tempe resident Erin Edwards and her mother, Amy, into signing.

The two were waiting in line to get into the popular Camelback Corridor clearance store Last Chance on August 29 when they were approached by a male signature-gatherer. Erin Edwards says his sales pitch had nothing to do with West.

“He asked if I was a voter and then said something along the lines of, ‘Do you want independent women's voices to be heard?’ And I said, ‘Yes,’” Erin says. “So he went, ‘Okay, sign here for this candidate,’ and didn't say any names.”

Michele Martinez of Tempe had a similar experience after being accosted outside of a Walmart in Mesa by a “young, scruffy-ish white guy” who said the petitions were “in support of third-party candidates.”

“When I asked him which candidate, he goes, ‘We just need to get a third-party candidate on the ticket.’ I kept asking and he said, ‘It’s not important,’” Martinez says. “When I told him, ‘Well, I’m a Biden supporter,’ he just grabbed everything out of my hand and walked away.”

Other encounters were a little more confrontational. A Glendale woman, who asked to remain anonymous, says she was hounded by a circulator at a local post office.

“He asked if I’d sign a petition to get independent candidates on the ballot in Arizona. I knew people were gathering signatures for West, so I said no,” she said. “When I left, he asked me again. I said no and started walking toward my car. He followed me and said, ‘You don't vote?’ I said I did, but I wasn't signing his petition. He continued to follow me, and I tripped and fell trying to evade him.”

Other circulators used the names of people associated with West’s campaign. Tucson resident Holly Shinn was told it was supporting “11 different candidates,” referring to the electors listed on the petition who would potentially represent West in the Electoral College. Kat Rivard of Phoenix says a circulator told her it was for Michelle Tidball, the Wyoming preacher who is West’s vice-presidential running mate. Neither voter signed.

New Times reached out to Edee Baggett, co-president of National Ballot Access, on Tuesday to comment on these alleged tactics. She said circulators weren’t instructed to hide West’s name on the petition, avoid mentioning his name, or confront voters. 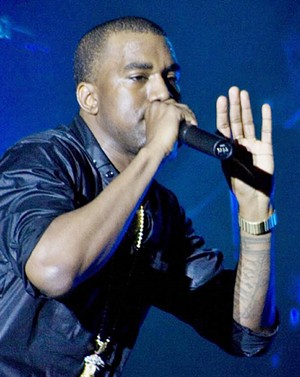 Kanye in concert.
Marcus Linder/CC BY-SA 2.0/Flickr
“They're certainly not told to do anything like that,” she says. “We are getting an independent presidential candidate on the ballot. His name is Kanye West. I mean, that's not a secret at all.”

Baggett declined to specify who’s backing West campaign on financing the company’s petition-circulating efforts (“It's no one from the Trump campaign,” she says). When asked if they are Republicans, Baggett said she’d have to check.

“You know what? I'll give them a call and ask them. All I know is they are working with Mr. West, who I've never met.”

When asked if circulators were saying the petitions are for a third-party candidate, 11 electors, or Tidball, Baggett didn’t deny it.

“None of those things are false. [Kanye] is an independent candidate,” she says. “I mean, we’re not doing anything illegal here.”

Baggett is technically correct — none of these alleged activities are against current state election laws.

Solis says the Secretary of State hasn’t received any official complaints regarding petition circulators employed by National Ballot Access to get signatures for Kanye’s campaign. If they did, they’d be passed on to the Election Integrity Unit of Arizona Attorney General Mark Brnovich.

Arizona law does allow voters who have signed nomination petitions for political candidates to withdraw their signatures, Solis says. The process involves submitting a signed, notarized affidavit, which is available on the Secretary of State’s website and must be submitted to their office by 5 p.m. on Friday.

According to Solis, the office hasn’t received any statements of withdrawal as of Tuesday afternoon. She says some voters have called to inquire about the process.

Edwards was one of them. She says she thought about going through the process but didn’t think she could finish it by the deadline.

“I don't think that it can be done in time,” she says. “I just wish I would’ve seen Kanye’s name [on the petition] before I signed.”
KEEP PHOENIX NEW TIMES FREE... Since we started Phoenix New Times, it has been defined as the free, independent voice of Phoenix, and we'd like to keep it that way. With local media under siege, it's more important than ever for us to rally support behind funding our local journalism. You can help by participating in our "I Support" program, allowing us to keep offering readers access to our incisive coverage of local news, food and culture with no paywalls.
Make a one-time donation today for as little as $1.