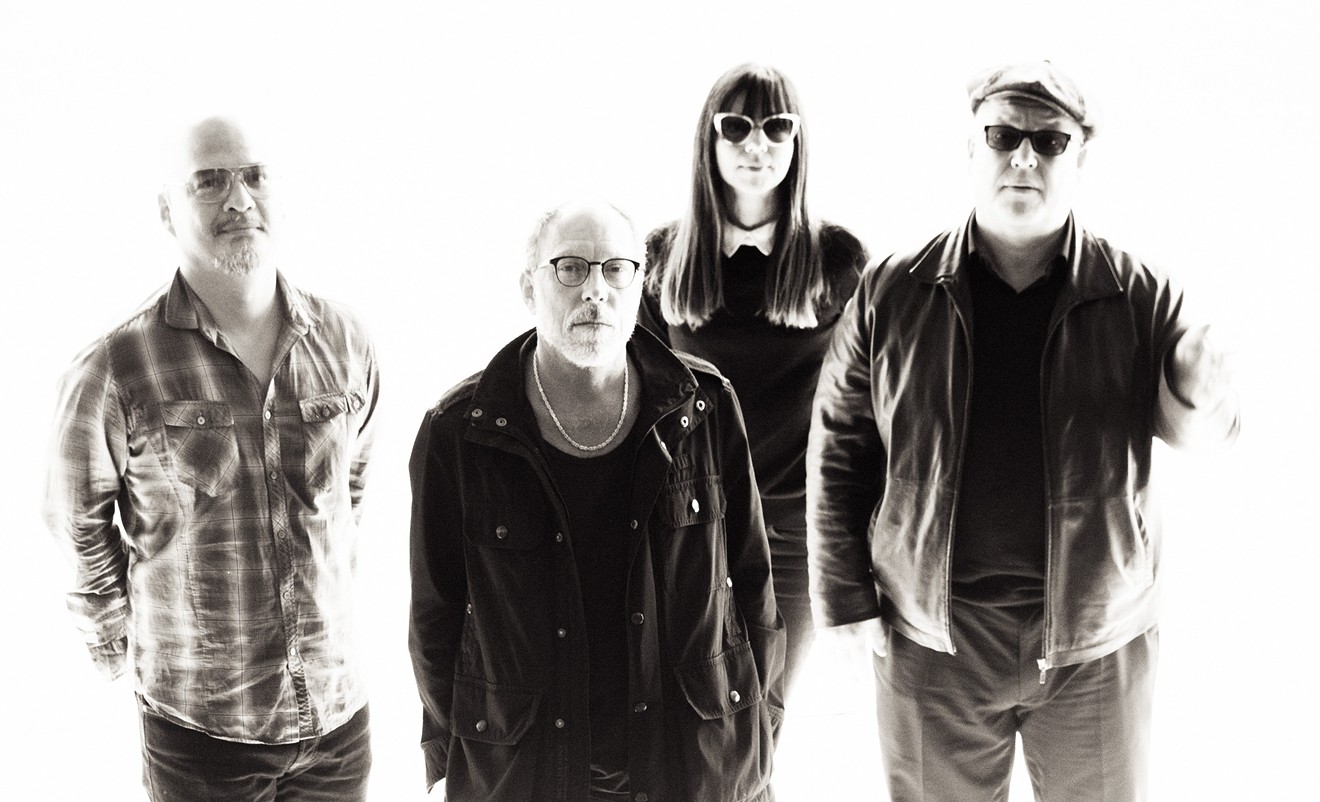 Joey Santiago, David Lovering, Paz Lenchantin, and Black Francis are the Pixies. Travis Shim
Black Francis lives in a musical world mostly void of artifice. The musician has always strived to create and perform music as art, but not with an esoteric smarminess, just music that at a gut level is just damn good.

Longtime frontman of native Boston rockers the Pixies, Francis, born Charles Michael Kittridge Thompson, has had a roller coaster ride at the helm of one of alternative rock’s most popular and enduring groups. He and his veteran band of “mischievous elves” are on an upswing of renewed popularity as they continue a second 2017 U.S. tour leg, which will include playing the inaugural Lost Lake Festival, being staged October 20 through 22 in central Phoenix.

The band is supporting their sixth album release, Head Carrier, and while they have gone through a few bass players, it appears the Pixies are back and sounding as good as ever.

The Massachusetts quartet have traversed the globe, playing pretty much nonstop since February, hitting stages in Europe, Asia, the Middle East, Scandinavia, Africa, and Australia. Francis has an affinity for playing international sites.

“They got it and we don’t,” he says of Europe. “Look, you can have Mexican food in Luxembourg, right? It’s not gonna be very good, is it? I think our version of cafe society is like that. There’s a certain cafe society [in Europe]. I think as a result, there is a greater appreciation of the arts.”
Francis started the band with University of Massachusetts-Amherst classmate Joey Santiago in 1986, adding Kim Deal, who answered Francis' classified ad seeking a bass player inspired by Peter, Paul, and Mary — and Husker Du. Original and longtime beat-keeper Dave Lovering soon followed.

While touring with Throwing Muses, the band caught the attention of producer Gary Smith, and soon after, their now-infamous Purple tape led to the recording of the band’s breakthrough EP Come on Pilgrim.

The band’s swing from quiet to loud music, with lyrics about religion, sexual tension, Spanish culture, and poverty, and sung in hushed tones and wailing chants, drew critical praise and international fans.

Praise and popularity among the college radio and alt set ignited a buzz among fans and critics for the band's 4AD-labled albums: Surfer Rosa, Doolittle, Bossanova, and Trompe Le Monde.

Released in 1989, Doolittle, typically considered the band’s top album, had the raucous bombast of “Wave of Mutilation” and the Velvety pop jangle of “Here Comes Your Man." That's when Deal’s frustrations began to grow. Though she played the vocal foil to Francis’ lead, the two were constantly bumping heads.

By 1990, Deal had formed side project The Breeders with sister Kelley, while Francis, Santiago, and Lovering moved to L.A. The fissure of discord between Deal and Francis began to resemble a band broken, even as The Breeders' debut album, Pod, came out.

Deal’s last album recording with the Pixies would be 1993's Trompe Le Monde. The band officially broke up in 1993. Francis sent a letter to bandmates following an awkward tour supporting U2.

After an 11-year hiatus, the band regrouped, but things were never really the same. Nearly another decade passed with a few EPs, but in the end, Deal made her final break.

For the band’s first full-length, post-Deal recording, Indy Cindy in 2014, The Fall’s Dingo Archer handled the bass duties. Eventually, Kim Shattuck, formerly of The Muffs, won an audition to tour with the Pixies, but her stint ended six months later.

“Everybody auditioned for the band, but I gave it to another person [Shattuck] and that person didn’t work out, of course,” Francis says. “I knew that David and Joey in particularly wanted Paz [Lenchantin]. So, I was thinking at that point she wasn’t insulted that she had been passed over the first time around. She agreed to come on board.”

When Francis shared with Lenchantin a rough cut of a new song by phone, she turned it into an ode to her Pixie progenitor Deal — with Francis’ blessing. The song “All I Think About Now” was born, and it allowed the band to pay homage to Deal on Head Carrier.

“I don’t know if I have ever thought about it that way, but yeah, I suppose it did give some closure to that part of the band,” Francis says. “But, I think for the band [Deal] brought a certain kind of raw beauty or whatever to the sound that was, if I could sum it up in a phrase.”


"You try to make a calculated decision once in a while. ‘So, what’s my best move now?’ Hopefully you make that decision before you hit a brick wall.”

As for Lenchantin, an Argentine-American who had played with supergroup Perfect Circle and L.A. psychedelic rockers Entrance, Head Carrier was her debut Pixies recording.

“Well, she’s a very good musician,” Francis says. “We’re all kind of aware of that. She doesn’t necessarily try to fit into the Pixies bass-playing role and singing role. She kind of raises the bar a little bit for the band members, musically.”

After the 1988 release of Surfer Rosa, the band worked with British producer Gil Norton (of Foo Fighters fame) for 1989’s Doolittle. For Head Carrier, the band took a leap of faith and switched to another English producer, Tom Dalgety, who has worked with popular duo Royal Blood.

“Continuing on with the same producer would have been staying in a comfort zone,” Francis says. "You try to make a calculated decision once in a while. ‘So, what’s my best move now?’ Hopefully, you make that decision before you hit a brick wall.”

Outside of the U.S., the album proved in some ways that Francis’ instinct with Dalgety and Lenchantin was right on target. The album appeared on Top 40 album charts in 14 countries, number 78 in the U.S.

During the band's current tour, they have been playing a mix of albums. While it would be easy for Francis to want only to play new songs and not play “Wave of Mutilation” for the 8,000th time, he still wants to play for the audiences who know the classic Pixie nuggets.

“You’re playing for a paying audience, so that’s sort of a good thing," he says. "It’s a good dynamic. Whether it’s a new song or an old song, you want to deliver on some level so that they’re pleased. They’re the patron.”

Along with getting older and maintaining the band’s relevancy, Francis has put out a dozen-and-a-half solo and side-project albums.

“People are always trying to find out if their lives are balanced or not,” he says. “What do I know? If you are fortunate enough to have a family to take care of, and for them to take care of you, frankly, I mean, yeah, that will bring a certain amount of down-to-earth reality to one’s life.

“I am grateful for it, but I can’t say that it changes my goals as a musician. I still got my gig tonight, you know what I mean.”

The Pixies are scheduled to perform at the Lost Lake Festival at 8:30 p.m. on Friday, October 20.

KEEP PHOENIX NEW TIMES FREE... Since we started Phoenix New Times, it has been defined as the free, independent voice of Phoenix, and we'd like to keep it that way. With local media under siege, it's more important than ever for us to rally support behind funding our local journalism. You can help by participating in our "I Support" program, allowing us to keep offering readers access to our incisive coverage of local news, food and culture with no paywalls.
Make a one-time donation today for as little as $1.
Mark C. Horn
Contact: Mark C. Horn