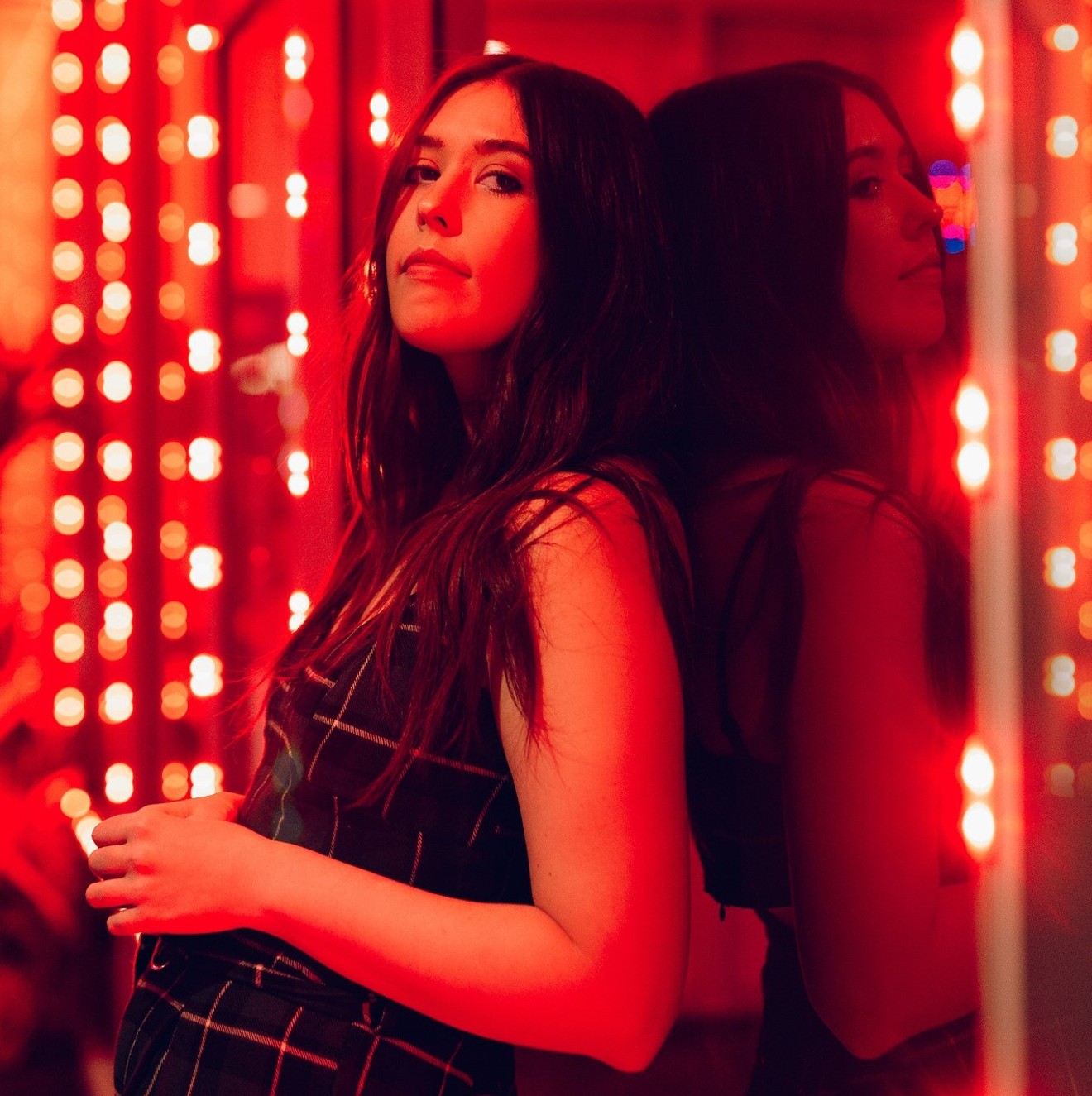 So it was for Sydney Sprague, whose new album, maybe I will see you at the end of the world, is filled with songs she wrote during a sea change in her life.

The record, which came out February 26 on Italian indie label Rude Records, is “like a diary of my life between 2018 and 2019,” she says. “I thought I was pacing in circles in my career, my relationships, my friendships, everything. It was a breaking point of realizing that I had to shut everything down and start over.”

She says it represents “that whole period of time of mourning everything I had to let go of, and the new beginnings of everything that started after that.”

Her new beginning is inspiring a lot of media attention. In addition to local coverage on indie radio station KWSS and culture website YabYum, she’s been featured as one of the Alternative Press’ “New Artists You Need to Hear,” been interviewed by venerable music magazine Kerrang!, and had her songs played on BBC Radio 1.

“It’s really weird and overwhelming and exciting, but it’s just still so surreal because it’s happening in this bubble,” Sprague says of the attention. “I’m in my apartment all day every day, so I see stuff online and it’s super-cool, but it doesn’t ever feel fully real to me.”

Though she’s only 29, Sprague is by now a veteran of the Phoenix music scene. She started playing music at 11 (the same year she moved here from Austin, Texas), writing songs and strumming a guitar alone in her bedroom. “My parents eventually overheard through the walls of my room and bribed me to come out in the living room,” she says.

She was 13 when her folks paid her $5 to perform at an open mic at the long-closed Mama Java’s coffee shop on Indian School Road — “the OG spot,” she says.

“It scared the shit out of me, but I got addicted to it, so I started going back to that open mic a lot and started hitting some of the other open mics in town.”

In her teen years, she was influenced by the music of pop singers like Britney Spears, Kelly Clarkson, and Avril Lavigne. Her listening habits then shifted toward pop-punk and emo acts like Fall Out Boy and All-American Rejects.

“Then, I got into my ‘too cool for all that’ stage and was listening to more indie stuff: Bon Iver, Arcade Fire, The National. But all of that blended together is what I perceive my sound to be now — there’s a little bit of all of it in there,” she says.

As Sprague’s musical taste evolved, so did her career.

Exposure at open mics led to shows at outdoor shopping centers like Tempe Marketplace, resorts and restaurants, and eventually venues like The Rebel Lounge and Valley Bar. Though she’s released three EPs since 2015 (maybe i will see you at the end of the world is her first full-length album), before the pandemic, Sprague was a full-time musician who performed mostly covers.

“I haven’t actually had a chance to do my own original music as a moneymaker yet. I’ve just been laying low the last year. I’m not making a ton of money right now,” she says, laughing.


Kerrang!, in its positive review of maybe I will see you at the end of the world, says the album’s creation was “shaped by misfortune, a pessimistic view of reality, and an outpouring of her innermost dialogue.”

But don’t think that means the record is a downer.

Rather, its 10 tracks are comforting, and relatable to anyone who’s ever been frustrated with their own life, tangled up with other people, but still hopeful that better days are possible. Sprague’s voice is alternately sweet and haunting, wise and weary.

The last song on the album, “end of the world,” was the first one she wrote. It’s a wistful half-apology, half-goodbye: “Maybe the time was just not right / Give a little space to clear my mind / And maybe I will see you / At the end of the world.”

Sprague says, “That was at the beginning of the process of realizing that I had to let go of all these things, and if they were meant to be, I would see them again.”

In “Steve,” a song about feeling nostalgic for the things you know you needed to leave behind, she asks plaintively, “Can I get what I want only once / Would it ever be enough?”

Fellow local artist Danielle Durack joins Sprague on “object permanence,” a track that should resonate with anyone who’s ever felt uncertain in a relationship (so, like, everyone).

But despite the angst and the anxiety, Sprague’s point of view is pretty clear. The first track on the album (and the last written), “i refuse to die,” expresses optimism despite the circumstances. “I could do that thing / I said I’d never / I think it’s time to try / So I refuse to die,” she sings.

The song came to her at the end of her transitional period, Sprague says. “That was when I fully leaned into, ‘I’ve got to get my shit together. It’s time to start over.’”

Her writing process is always a little bit different, she says, but “most of the time, it’s like I’m having a hard day or someone has pissed me off, or something bad happened and a line pops in my head that I can’t stop thinking about. I’ll sit down with the guitar and it just spirals out — it just all comes out in a big chunk. I have to sort through it a little bit and then once it’s out, it’s out of my head completely and I don’t even feel mad anymore.”

Rude Records
Sprague and her partner, Chuck, will sometimes work on songs together in the studio of the home they share in south Scottsdale. Since the pandemic, she says she’s been watching The Bachelor and scrolling TikTok “way too much — like an absurd amount,” she says. She’s listening to a lot of Billie Eilish and UPSAHL (another artist from Phoenix on the way up) these days.

“I like getting outside,” she says. “I go for a lot of walks just to keep my mind quiet.”

She’s cautiously optimistic that she’ll get to perform live by the end of the year, but in the meantime, she performs on Twitch every Monday at 7 p.m. The “A Case of the Mondays” series features Sprague performing covers of songs that viewers have added to a collaborative Spotify playlist throughout the week.

“People will toss more ideas in the chat, and sometimes I’ll learn songs on the spot,” she says. “It’s a really great time. There’s a community of people who have consistently been coming for the past four months now.”

And of course, she’s spending time promoting the new album.

“Lately, it’s been a lot of emails,” she says. “Emails all day, every day. A couple of interviews here and there.”

The record is available to stream all the usual places like iTunes and Spotify, but if you want a physical copy, you can order off the Rude Records website — or you can drop Sprague a DM on Instagram, send her the cash on Venmo, and she’ll get one to you.

“I’m doing personal deliveries at this point because it’s fun for me to drop them off. I get excited about it,” she says.

She’s also excited about the reaction from listeners to the record.

“Everybody’s just like, ‘This is amazing. I love it. This has gotten me through a hard time.’ I feel like people are actually listening to it and it actually resonates with them, which is a huge accomplishment for me.”

And, Sprague adds, after more than a decade playing music, maybe i will see you at the end of the world is “the first thing I’ve ever made that I actually listen to.”

“I went in with such intense planning, I knew exactly what I wanted everything to sound like, and I feel like we got there and then some,” she says. “It’s all my influences in one. It’s everything I love in one place, so I really do like listening to it.”
KEEP PHOENIX NEW TIMES FREE... Since we started Phoenix New Times, it has been defined as the free, independent voice of Phoenix, and we'd like to keep it that way. With local media under siege, it's more important than ever for us to rally support behind funding our local journalism. You can help by participating in our "I Support" program, allowing us to keep offering readers access to our incisive coverage of local news, food and culture with no paywalls.
Make a one-time donation today for as little as $1.