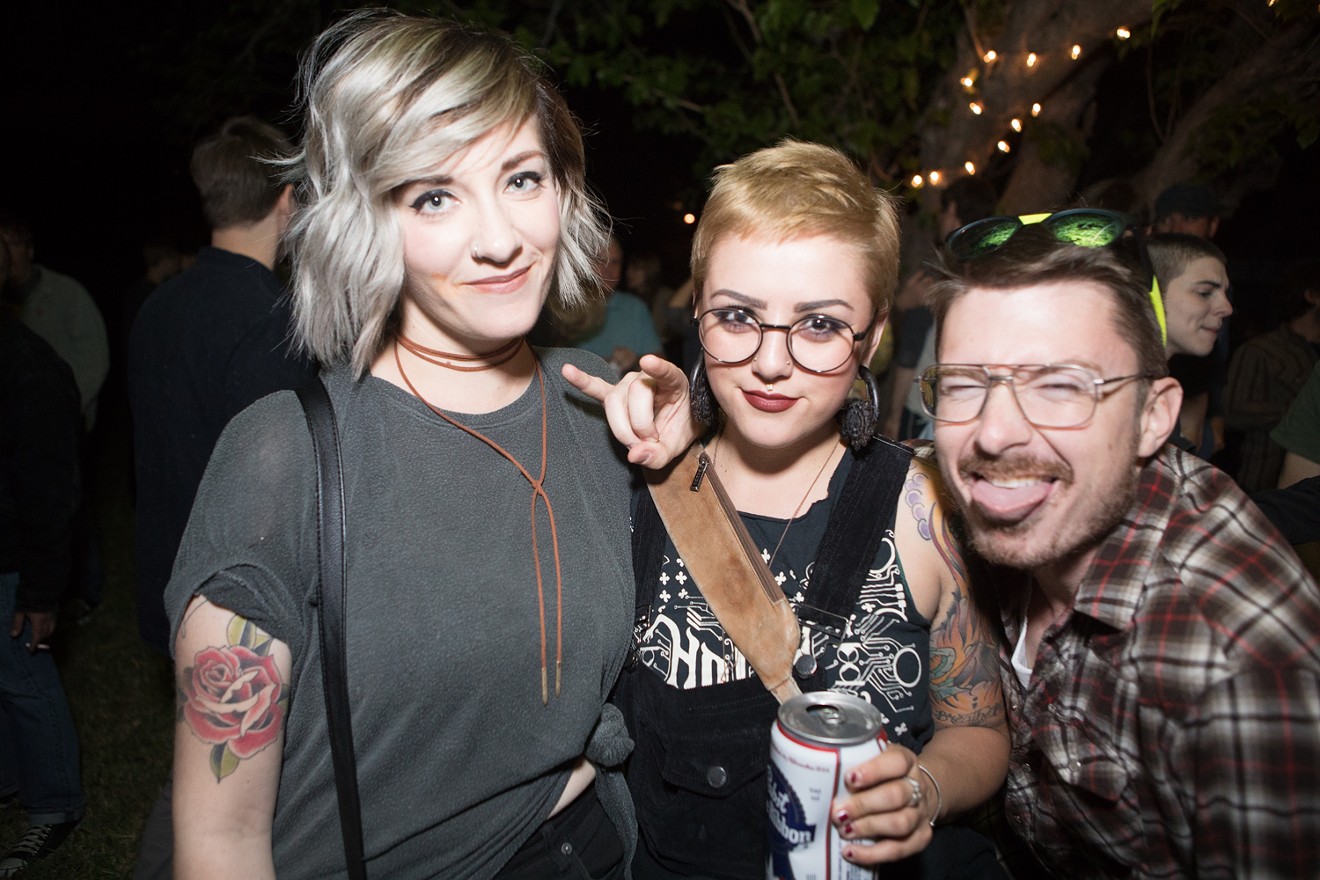 Partying at Vanishing Show III. Jim Louvau
When you head out to see a night of bands, you’re hoping for a shindig that will keep you moving. Right? That’s the exact premise of Vanishing Show IV.

It’s a mobile party that guarantees to set you in motion — and not just from the music. DJ and community event planner A Claire Slattery hosts the annual event via her umbrella organization, Butthurt Tempe. This year’s night of “bands, bikes, and beers” will maintain the same formula as the previous three.

Here’s how it works: On April 7, the day of the event, the location of the first show will be announced. Things will start around 7 p.m., and everything will take place around the greater Maple-Ash-Farmer-Wilson neighborhood in Tempe.

“When that first band is nearing the end of their set,” Slattery says, “we’ll release the information about the next location, and word will spread through the crowd and people can then share it through social media, texts … Then they can walk, bike — or whatever transportation they prefer — to the next spot.”

Keeping with the frenetic nature of the event, each of the four bands’ sets is relatively short, between 20 to 30 minutes.

Although these four shows are not super lengthy, there’s still plenty of time for you to get a good dose of their music, down a few of whatever you’re drinking, and mix it up with fellow partygoers.

The Vanishing Show’s brevity is also a theoretically brilliant way of staying a step ahead of the cops, who might follow up on complaints by un-fun neighborhood residents who aren’t down for a concert — and its attendees — rolling through on Saturday night.
It’s a classic scenario: People talk a good game about wanting a city lifestyle. They move into areas dense with bars, clubs, and restaurants — and in this case, seconds away from a giant college campus. They want the nightlife. Until they don’t.

“The Tempe noise ordinances and cops going around these vibrant neighborhoods and busting up parties and fun events,” Slattery says, “is a big part of what inspired the Vanishing Show.”

Per city code, noise levels measured either at the property line or at the property where people are filing the complaint can’t exceed 55 decibels between 7 a.m. and 10 p.m. After that, the limit’s 45 decibels. For reference, your typical vacuum hits 70 decibels.

In other words, a lengthy, loud concert will not fly. Which is why this show’s mobility might be its biggest asset.

Not only are the evening’s venues diverse, the bands are, too.

There’s also Dadadoh and the POC, which finds Bryan Preston and crew mixing together elements of hip-hop, punk, and noisy rock. Garage rockers Nanami Ozone keep you in a hazy sway with soft fuzz and gentle surf sounds.

Because it ain’t over till it’s over, once the bands are done and the music at the last venue is wrapped — whether by natural causes or courtesy of Tempe’s finest — the after-party begins.

Taste of Tops on University Drive will host party people for more brews. Word has it there will be some eats, too, and keeping the musical vibe flowing until the very end, DJentrification will be onsite to spin.

Vanishing Show IV starts at 7 p.m. on Saturday, April 7, in Tempe, in and near the Maple-Ash Neighborhood. Admission is free. Visit the Facebook event page that day to find out the location of the first event.