The Weeknd is scheduled to perform on Tuesday, August 30, at State Farm Stadium in Glendale. Republic Records
Hitmakers both old-school and modern-day are set to perform in the Valley this week. R&B/pop/hip-hop juggernaut The Weeknd, who’s released more than a dozen top 10 singles during his career, is finally bringing his latest tour to State Farm Stadium on Tuesday night. Meanwhile, nostalgia tours featuring artists and acts like Rick Springfield, Men at Work, A Flock of Seagulls, and Dramarama will roll through Celebrity Theatre.

If that’s not enough '80s for you, Peter Hook of Joy Division and New Order fame is set to perform at The Van Buren on Monday evening.

Details about each of these concerts are available below. Check out Phoenix New Times’ live music listings for more local shows happening from Monday, August 29, to Thursday, September 1.
click to enlarge 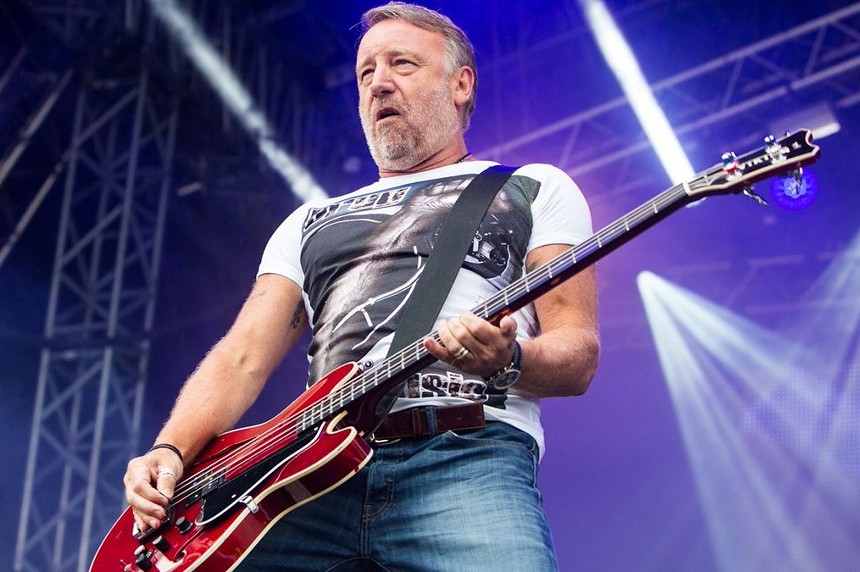 Peter Hook and the Light

Monday, August 29
The Van Buren, 400 West Washington Street
In the end, it was creative differences and not love that tore New Order apart. The band already had survived so much. As the one-time members of Joy Division, they had pressed on after the death of their iconic lead singer Ian Curtis in 1980, and reconfigured themselves into a radically different group. Peter Hook’s fluid and muscular bass playing was the main unifying sonic element connecting the desperate, haunted sound of Joy Division with New Order’s more club-oriented, romantic music. But creative differences between Hook and the rest of the band (especially singer/guitarist Bernard Sumner) split up New Order. The group would later reunite without Hook, leaving the bassist to carry on playing the old hits with his new band. Peter Hook and the Light know what people want and give it to them at every show: the old Joy Division goth anthems, the indelible New Order hits. There’s no pretense of writing and presenting new material with the Light — they make no bones about being a nostalgia operation. It’s not the same without Curtis or Sumner’s distinct vocals, but there’s no mistaking that bass for anyone else. 8 p.m., $35 via livenation.com. Ashley Naftule

Monday, August 29
Celebrity Theatre, 440 North 32nd Street
We probably wouldn’t swear to it in a court of law, but we’re starting to suspect that pop-rocker Rick Springfield struck some sort of deal with the devil prior to his career. How else would you explain the Australian-born musician and actor’s boundless talents and perpetually youthful appearance? (Seriously, he’s reaching his mid-70s and looks decades younger.) His recurring role as Lucifer on TV’s Supernatural could’ve been him winking at the Faustian bargain he made to become a Grammy-winning artist and a heartthrob of suburban housewives everywhere. All jokes aside, both Springfield and his music have aged very well, as hits like “Speak to the Sky,” "Affair of the Heart,” “Love Somebody,” and (of course) “Jessie's Girl” still slap today. His current tour alongside '80s hitmakers Men and Work and John Waite also celebrates the 40th anniversary (more or less) of his breakthrough 1981 album Working Class Dog. 7:30 p.m., $35-$57 via etix.com. Benjamin Leatherman

The Weeknd performs during his current tour.
Hyghly Alleyne

Tuesday, August 30
State Farm Stadium, 1 Cardinals Drive, Glendale
Jay-Z once taunted Nas by saying, “You made it a hot line, I made it a hot song.” One could say the same about The Weeknd’s Abel Tesfaye and Peaches’ “Fuck The Pain Away”: She made it a hot song, he made it a hot career. As a soulful singer, The Weeknd has built an empire out of a handful of mysterious mixtapes, shameless Michael Jackson imitations, and self-mythologizing numb debauchery. He’s long since fucked the pain away — his music is about a man trying to fuck away everything else, too. There’s a reason why The Weeknd has become one of pop’s most dependable megastars: To paraphrase wrestler Carmelo Hayes, when The Weeknd shoots, he don’t miss. The Starboy is a master at buoying his voice over a bed of throwback funk, electronic vibes, and earworm samples. Look at how effortlessly Tesfaye puts every other ’80s revivalist to shame with “Blinding Lights,” a song that nails everything that’s pleasing about that style with ruthless precision. And like the best stylists, no matter how much The Weeknd’s music calls back to other artists and eras, he always sounds like himself. Not bad for a guy who drinks Alizé with his cereal for breakfast. 6:30 p.m., tickets are available on the secondary market. Ashley Naftule

Show for A Show

Tuesday, August 30
The Rebel Lounge, 2303 East Indian School Road
If a cartoon about a lizard alien fostering a spunky human orphan sounds like a concept you can get behind, be sure to clear your calendar on Tuesday night. The Rebel Lounge is hosting a fundraiser concert for My Lizard-Alien Dad, a locally produced animated TV show that’s in the works. Phoenix-born rapper/rocker DaDadoh is composing the program’s theme song and will perform multiple versions of the tune at the event for the audience to decide which is the best. Other artists and acts scheduled to take the stage include Hieroglyph, Gift Horse, and Sareena Dominguez. Comedian Lou Moon will also perform and local writer Jeff Kronenfeld, one of the creators of the show, will host the event while dressed as its titular lizard alien. 7 p.m., $12/$15 via seetickets.us. Benjamin Leatherman

Thursday, September 1
Celebrity Theatre, 440 North 32nd Street
Every decade of pop music produces its fair share of one-hit wonders, but the '80s may have been the all-time best era for one-hitters. It’s not just because its new wave and synthpop combination was a fertile breeding ground for all kinds of catchy earworms; thanks to the advent of MTV, even the most disposable of groups left an impression with an iconic haircut or a charmingly goofy music video. Nostalgia tour Lost '80s Live packages several of these groups together for a trip down memory lane. Of all the groups playing, headliners A Flock of Seagulls, famous for "I Ran" and a goofy cockatoo haircut, are least deserving of the one-hitter label. Their 1982 self-titled debut is solid from front to back. Ditto for alternative/power-pop trio Dramarama, who hit big with “Anything, Anything (I'll Give You),” but also had minor alt-radio hits in "Haven't Got a Clue” and "What Are We Gonna Do?" Also performing are: Missing Persons (best known for “Walking In L.A.” and singer Dale Bozzio’s glass dome bra); tyrannical egomaniacs Wang Chung (I mean, must everybody Wang Chung tonight?); British-born synthpoppers Naked Eyes (famous for "Promises, Promises"); reggae band Musical Youth (“Pass the Dutchie”); and pop singer Stacey Q ("Two of Hearts"). 7:30 p.m., $45-$125 via etix.com. Ashley Naftule

Thursday, September 1
Last Exit Live, 717 South Central Avenue
After taking off most of the summer, a period that’s typically rough on smaller concert venues, Last Exit Live will make a return this week and resume its role as one of downtown Phoenix’s better midsized rock bars. Americana/roots-rock band The Dales will have the honor of being the first group to headline a Last Exit gig since its hiatus. The California-based trio — consisting of guitarist Preston Pope, keyboard player Drew Lawrence, and lead vocalist Jackie Tozzi — specializes in splendorous three-part harmonies that are a delight to the ear. They’ve been featured on NPR, and released a handful of well-received albums, including 2018’s Marie and 2020’s Easy Times EP. Country singer-songwriter Taylor Glasheen opens the evening. 8 p.m., $15/$18 via eventbrite.com. Benjamin Leatherman
KEEP PHOENIX NEW TIMES FREE... Since we started Phoenix New Times, it has been defined as the free, independent voice of Phoenix, and we'd like to keep it that way. With local media under siege, it's more important than ever for us to rally support behind funding our local journalism. You can help by participating in our "I Support" program, allowing us to keep offering readers access to our incisive coverage of local news, food and culture with no paywalls.
Make a one-time donation today for as little as $1.