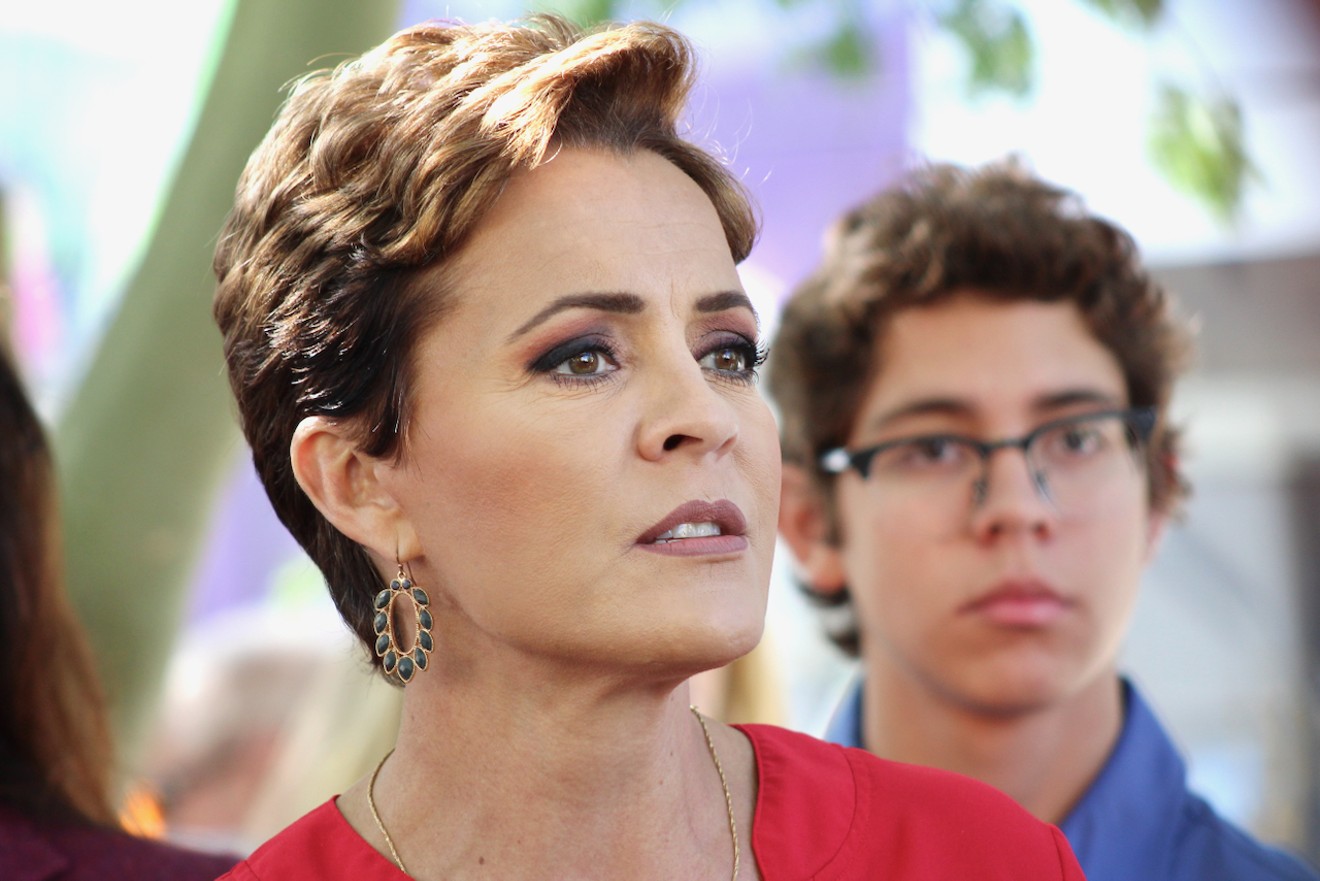 Kari Lake seldom avoids a microphone. But she's gone radio silent since she lost the race for governor. Elias Weiss
All of the election results still aren’t clear in Arizona, but one thing certainly is: The red wave predicted to sweep over the state didn’t materialize on November 8. Commence the recriminations, drain circling, and downward spirals.

As early results started coming in on election night, the moods at the political watch parties shifted dramatically. Surprised Democrats turned jubilant, and Republicans expecting to sweep races across the state leaned into their unfounded election-related accusations.

Fast-forward a week and Kari Lake has gone silent, Mark Finchem is political panhandling, Abe Hamadeh is walking back his claims of victory, establishment Republicans are calling for Kelli Ward’s ouster, and Wendy Rogers is discovering self-awareness. Weird, right?

Kari Lake has hunkered down since Election Day and stayed away from Twitter.
Elias Weiss

Kari Lake has lived her life on television. Throughout the course of her campaign, the former newscaster relentlessly taunted her opponent, Katie Hobbs, with the threat of cameras. Hobbs, a former social worker, was decidedly camera shy, refusing to debate and skittish when confronted on tape. For months, Lake’s strategy seemed to be to make more noise.

Then, on Monday, as each batch of votes seemed to make Lake’s position worse, something unusual occurred. For a period of more than 24 hours, just days after a Tucker Carlson appearance, directives to voters to “keep your champagne cold,” and lobbing insults at the media, Lake said nothing at all. Her social media feeds were silent. There were no rallies. In her war room, staffers and advisers began debating whether or not Lake should concede, should she lose, the Washington Post reported on Tuesday. After months of a campaign built on a media frenzy, the stark radio silence was an appropriate ending.

Now, the race has been called in Hobbs’s favor, making her the first Democrat elected governor since 2002. And Lake has broken her silence — and, so far, refused to concede. "Arizonans know BS when they see it," she tweeted on Monday night, shortly after the race was called. Is it the end of Lake’s meltdown, or just the beginning?

Mark Finchem First to Lose — And Circle the Drain

Mark Finchem is a few sandwiches short of a picnic.

The “all hat, no cattle” loser in Arizona’s secretary of state race is documenting his own spiral — on Twitter and in a string of emails that continue his unfounded claims of election fraud.

After calling the 2020 election “irredeemably compromised,” Finchem doubled down and called this year’s contest a “steaming shit show” and “one of the biggest electoral disasters in American history” in a fundraising appeal to his followers on Tuesday morning.

There is no evidence of a stolen or fraudulent election in Arizona. And Finchem already lost to his rival across the political aisle, former Maricopa County Recorder Adrian Fontes, according to media projections. Fontes won by such a margin that the race was the first statewide contest to be called in Arizona last week amid a sluggish vote tally.

Still, Finchem said on Tuesday, “This isn’t over.” But it is over for the conspiracy czar, a virulent antisemite and disgraced cop who campaigned alongside a convicted criminal.

He hinted at his dire situation in his email on Tuesday when he begged for cash “to help pay off campaign debt.”

“Everyone knows polls have their problems, but come on — when the polls say 17 percent of Election Day voters are Republican but more than 50 percent of the votes are for the Democrats, something is wrong.”

Finchem has never responded to questions from Phoenix New Times.

Abe Hamadeh claimed victory — and then hoped no one noticed.
Gage Skidmore/Creative Commons

The first results on election night put Arizona Democrats far in the lead, to their delight (and surprise). As election officials began to count the more GOP-heavy Election Day ballots, however, the state of affairs began to look better for some of the Republican candidates. It was at this moment — with just a million or so votes yet to be counted — that Abe Hamadeh declared victory in the race for attorney general on Twitter as he took the lead by a small margin on November 9.

“I want to thank the people of Arizona for entrusting me with this great responsibility,” Hamadeh tweeted solemnly. “I will NEVER forget who I’m fighting for.” Kari Lake wrote back, “Well done, friend.”

Spoke too soon, perhaps? With 99 percent of votes in, Kris Mayes, Hamadeh's Democratic opponent, now leads him by 546 votes. The race hasn’t been called yet — and will likely head to a recount — but Hamadeh seems to have realized he jumped the gun. His victory tweet is now deleted, and he’s turned to tweeting out Winston Churchill quotes: “If you're going through hell, keep going.” We’ll see if he makes it out.

A leading Republican called for Arizona Republican Party Chairwoman Kelli Ward to resign in the wake of an epic election collapse.
Zee Peralta

Arizona GOP Chair Kelli Ward has completed the political hat trick: She lost two U.S. Senate seats and the governor’s office in three short years. On Monday, she also lost her fight to keep her cell phone records from the U.S. House committee investigating the January 6, 2021, attack on the Capitol.

The physician and former state senator promised Arizona Republicans a “red tsunami.” What they got was a low tide that lapped the shore and never crashed. In fact, Democrats in Arizona won a full six-year term in the U.S. Senate, kept the secretary of state’s office, took the governor’s office, and are poised to take the attorney general’s post.

Karrin Taylor Robson, the former Arizona Board of Regents member who gave Kari Lake a run for her money in the Republican gubernatorial primary, called for Ward’s resignation on Tuesday.

“Kelli Ward’s leadership of the Republican Party has been an unmitigated disaster,” Taylor Robson wrote in a scathing letter.

In a stark departure from the basic duties of any party chair, Ward actually campaigned against Republicans along the 2022 trail, calling Republican House Speaker Rusty Bowers a “loser” and lobbing the preschool potty humor insult, “Rusty Bowels.”

Under Ward’s leadership, this election will go down in history as the first since 1974 when Republicans have lost the majority of statewide races in an election cycle in Arizona.

“For the good of the party she claims to love, and for the future of the state that we all cherish, Kelli Ward must do the right thing,” Taylor Robson wrote. “Kelli Ward must resign as the Arizona Republican Party Chairman.”

Ward did not immediately respond to requests for comment from New Times.

Her response: "Today is the day where we find out if the Communists in the GOP throw the sweet grandma under the bus for being white."

The firebrand lawmaker from Flagstaff has made plenty more headlines this year. The state Senate opened an ethics investigation into Rogers after she mocked victims of the tragic school shooting in Uvalde, Texas, in May. She tried to meddle in the French presidential election in April, and even said she wanted to put 1.3 million Americans out of work, earning her the title of “Best Racist Blowhard” in this year’s Best of Phoenix.

Rogers isn’t the alt-right extremist you’d expect to show grace and humility after mammoth Republican underperformance across a state that she has, for years, claimed is rife with election fraud.

But that’s exactly what happened on Monday. Rogers joined Phoenix-based youth MAGA leader Charlie Kirk, a founder of the conservative Turning Point USA, on his video podcast. Turning Point’s last-ditch efforts to snag wins for statewide Republicans in competitive races proved to be detrimental in the end.

An exasperated Kirk buried his face in his hands as he said, “Wendy, I gotta be honest. I mean, you know this state really well. You’ve been a grassroots activist for a while. The vibe on the ground was totally different than this, wasn’t it?”

In a moment of commendable self-awareness, Rogers replied, “Yes. We wonder now if we were in an echo chamber. I don’t know. I’m just beginning to get some perspective.”

— Elias Weiss
KEEP PHOENIX NEW TIMES FREE... Since we started Phoenix New Times, it has been defined as the free, independent voice of Phoenix, and we'd like to keep it that way. With local media under siege, it's more important than ever for us to rally support behind funding our local journalism. You can help by participating in our "I Support" program, allowing us to keep offering readers access to our incisive coverage of local news, food and culture with no paywalls.
Make a one-time donation today for as little as $1.

Katya Schwenk is a staff writer for Phoenix New Times. Originally from Burlington, Vermont, she now covers issues ranging from policing to far-right politics here in Phoenix. She has worked as a breaking news correspondent in Rabat, Morocco, for Morocco World News, a government technology reporter for Scoop News Group in Washington, D.C., and a local reporter in Vermont for VTDigger. Her freelance work has been published in Business Insider, the Intercept, and the American Prospect, among other places.
Contact: Katya Schwenk
Follow:
Twitter: @ktyschwnk
Elias Weiss is a staff writer at the Phoenix New Times. A native of Charlotte, North Carolina, he reported first for the Northwest Arkansas Democrat-Gazette and was editor of the Chatham Star-Tribune in Southern Virginia, where he covered politics and law. In 2020, the Virginia Press Association awarded him first place in the categories of Government Writing and Breaking News Writing for non-daily newspapers statewide.
Contact: Elias Weiss
Follow:
Twitter: @ecweiss