State Senator Kelly Townsend posted that "things would be peaceful" if the Constitution was followed. ArizonaSage via Wikipedia
On Wednesday, January 6, hundreds of supporters of President Donald Trump stormed the U.S. Capitol in an attempt to disrupt certification of a democratic election. They made it as far as the chambers of the U.S. Senate and were only repelled from the chambers of the U.S. House of Representatives by an improvised barricade and police with guns drawn.

The attack, which left four rioters dead and forced the evacuation of lawmakers, staff and journalists, was the culmination of efforts by Trump supporters to overturn the election by spreading conspiracy theories. This attack on American democracy has been not just enabled, but actively promoted by some Republican elected officials here in Arizona.

While some promoters of Trump election conspiracies backed away from their positions after seeing the violence yesterday, others did not. Some even expressed sympathy for those who sought to overthrow our system of democratic government. Here's who they are:

It's unsurprising that Ward would back rioters driven by election conspiracy theories. She has been one of the biggest proponents of them in Arizona and has had no compunctions about tearing asunder the state's Republican party in the process.

True to form, she tweeted out a claim that the riot could have been avoided if Democrats had submitted to an — unwarranted — examination of the voting process. (She did not mention that it was Republican elected officials in Maricopa County who went to court to avoid such theatrics.)

You know what could have prevented this? #ElectionIntegrity and full transparent investigations into 2020 fraud. Audits, eyes on paper ballots, full audit of ALL digitally adjudicated and all duplicated ballots, full evaluation of Dominion machines. Remember: Democrats refused.


What was truly shocking was when she suggested that the attempt to overthrow the election by force had created the pretext necessary to allow states to appoint new electors, who would presumably give the election to Trump over the will of voters and accomplish exactly what the attackers were hoping for:

Congress is adjourned. Send the elector choice back to the legislatures. https://t.co/yFyWjqN3Xv


A spokesperson for the Arizona Republican party did not respond to Phoenix New Times' request for comment yesterday.

Gosar, a dentist-turned-election-conspiracist congressman, has been one of the strongest local promoters of the baseless conspiracy theory that the election was stolen from President Trump. He was one of the first elected officials to attend protests alongside far-right activists and militia members outside the Maricopa Elections building following the November 3 election.

In the hours before rioters breached the U.S. Capitol's perimeter, Gosar, whose Congressional District 4 spans part of central and western Arizona, led an effort asking for Arizona's electoral votes to not be counted.

However, as the situation outside the Capitol escalated, he seemed to call for calm.

"...Let’s not get carried away here. I don’t want anyone hurt. We are protesting the violation of our laws ... If anyone on the ground reads this and is beyond the line come back," tweeted Gosar, next to a photo of rioters scaling the seat of representative government in the United States. 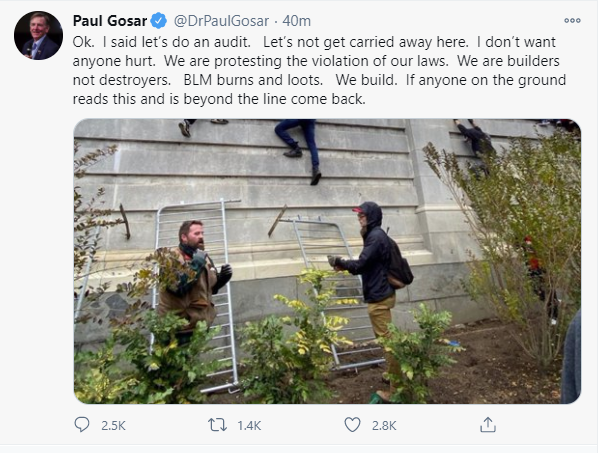 Screenshot
On Parler, a right-wing Twitter alternative which was filled with threats of violence before the protest, Gosar struck a different note.

"Americans are upset," he captioned the same photo.

Gosar later went on to vote with the majority of Republican representatives from Arizona to try and discount the will of voters from the state when it came to the presidential election.

Messages left at Gosar's offices in Washington D.C. and Prescott yesterday were not returned.

Recently reelected, Finchem has been another long-time peddler of election-fraud theories. His Twitter bio boasts that he chaired the farcical "hearing" on election fraud in Arizona, which was held in a hotel conference hall and attended by Rudy Giuliani.

On Wednesday, Finchem who represents Arizona's 11th Legislative District, which stretches from northwest Tucson to the city of Maricopa, was apparently in Washington D.C. to speak at a protest in support of efforts to overturn the election.

At 1:16 p.m., as rioters toppled barricades, scuffled with police and scaled the Capitol — and as Gosar sent his Twitter-only call for calm — Finchem tweeted out a photo of protesters, saying the photo was what happens when "the People feel they have been ignored, and Congress refuses to acknowledge rampant fraud."

The tweet led Adam Kwasman, a Republican who briefly held the seat Finchem now occupies, to call for his removal from the Arizona House of Representatives. In response, Finchem denied participating in the riot and said he was on the opposite side of the Capitol from the attack.

It's unclear if Finchem was aware of what was happening at the time he made his tweet, but in his follow-up message he repeated an unsupported conspiracy that the attack was started by "antifa" and the crowd just "fell for it."


@AdamKwasman Misrepresentation is running rampant among those who don’t even bother to fact check their claims. There’s this thing called a telephone and one uses it to communicate with others. #truthmatters pic.twitter.com/jddV5WkwK4


In a statement to New Times, Finchem said he was observing what happened from the far end of the plaza around the Capitol after being invited to speak at a protest planned there.

“What happened at the nation’s Capital [sic] was not helpful in the protest of electoral college electors,” he wrote, also forwarding a statement from Republican leadership in the state House and Senate condemning the violence.


Townsend, recently elected to the state Senate after representing Arizona District 16 in the House, has been another local pusher of election conspiracy theories, unsuccessfully asking the Arizona Attorney General to investigative complaints from the hotel "hearing."

After the Attorney General's office denied the request, the Apache Junction-area Republican told Arizona Capitol Times that she will seek to defund the office's election integrity division, which she helped create.

When Governor Doug Ducey issued a statement condemning the violence at the Capitol, Townsend weighed in to say that the people "have had enough" and that "things would be peaceful" if Article 4, Section 4 of the U.S. Constitution was followed.

That section, which allows states to arrange their own elections, has been interpreted by some Trump supporters to offer them a chance to sue when they believe other states are conducting elections improperly.


Townsend did not respond to an email and voicemail seeking comment.

Pinal County Sheriff Mark Lamb
Twitter
Lamb has been an outspoken supporter of President Trump. He's traveled to the White House to meet with Trump and made headlines for contracting COVID-19 after refusing to enforce mitigation measures in his county.

Video from a rally at the Arizona State Capitol yesterday, found by an Arizona Republic reporter and now taken down, shows Lamb dismissed the idea that what happened was President Trump's fault. Instead, he claimed the riot was about "aberrations" that have occurred. As evidence, he cited a number of right-wing conspiracy theories, including those about former presidential candidate Hillary Clinton and President-elect Joe Biden's son Hunter Biden.

"I don't know how loud we have to get before they start to listen to us," he said.

A spokesperson for the Pinal County Sheriff's Office did not respond to voicemail seeking comment.

This is a running list and may be updated. Feel free to contact us if you have additional information.
KEEP PHOENIX NEW TIMES FREE... Since we started Phoenix New Times, it has been defined as the free, independent voice of Phoenix, and we'd like to keep it that way. With local media under siege, it's more important than ever for us to rally support behind funding our local journalism. You can help by participating in our "I Support" program, allowing us to keep offering readers access to our incisive coverage of local news, food and culture with no paywalls.
Make a one-time donation today for as little as $1.