In Mesa, Millions of Covid Relief Funds Will Go To High-Tech Police Surveillance 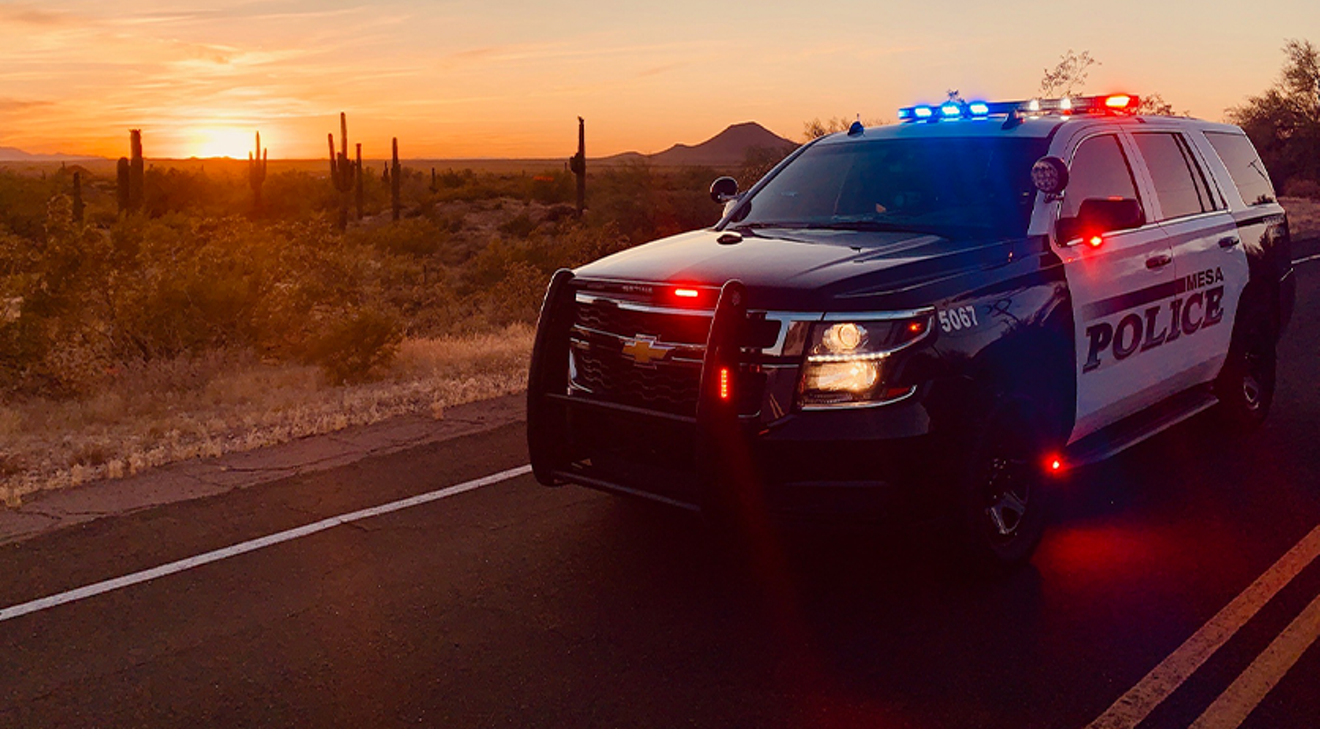 City of Mesa
This summer, the city of Mesa announced ambitious plans for a “real-time crime center”: a 24/7 surveillance hub fitted with a “video wall” of streaming CCTV cameras at police headquarters.

The price tag is high: The technology for the center alone will cost the city over $3 million. Recently, though, the city settled on an innovative source of funding for the project: federal Covid relief dollars, which are designated for local “public health” spending in the city.

Currently, $3.3 million of the $52 million Mesa received in the American Rescue Plan Act (ARPA) earlier this year is earmarked for the center. (The city will still have to foot the bill for staffing and remodeling, without the help of the relief money.) City leaders say they hope to have the system up and running by December.

The proposal is not particularly anomalous: As cities find themselves swimming in another round of federal relief dollars, plenty of the money is finding its way to law enforcement, encouraged by direction from the Biden administration to use the funds to help reduce crime. Elsewhere in the country, police departments have purchased everything from all-terrain vehicles to artificial intelligence with virus relief funds. Despite robust opposition, Phoenix gave bonuses to police officers with the money back in April.

“Police departments have seen [the grant money] as a way to pay for all of the fancy technology and equipment they’ve always wanted, but never had a reason or the funding to get,” said Matthew Guariglia, a policy analyst at the Electronic Frontier Foundation, an organization that monitors law enforcement surveillance.

“All of a sudden, you have cops saying, ‘You know what we need to fight Covid? We need drones.’”

Mesa, whose police department boasts that its crime rate has dropped to "the lowest in recorded history," received a $52 million ARPA grant in May. It was divvied up into different spending categories: public health initiatives, economic recovery, and community services, as well as increased pay for some city employees.

The $3.3 million dedicated to the real-time crime center comes out of the pool of $8 million that is meant for "public health." Another $160,000 of the public health funds will be used to purchase body scanners for jails.

Andre Miller, a pastor and longtime civil rights advocate in Mesa, told Phoenix New Times he found the budget increase to be “obscene."

"The funds were meant to assist citizens of the city of Mesa," he said, adding that he was frustrated by the city's recurring investments in law enforcement over community or social services.

In many cities, CARES Act funds were allocated to police and fire salaries as part of a strategic workaround that helped prevent broader cuts in other areas: Public safety payroll was eligible for CARES Act funds, while other areas of city government were not.

This was true in Mesa as well. The city says that the bulk of the money was used to pay for public safety payroll only as a way to free up money to address budget shortfalls caused by the pandemic. Kennington wrote in an email to New Times that the city had used the funds to “get the money out to the community as quickly as possible.”

The surveillance center, though, is a direct purchase for law enforcement — one that Mesa police had not determined how to fund until federal money came its way.

At the August meeting, city manager Chris Brady explained to the council that the city had considered hiring new officers with the relief funds, but decided against that plan. If the city hired more officers, he explained, it would have to pick up their salary costs once the relief money ran dry. Instead, Brady said, he asked the police department to suggest “some one-time purchases that wouldn’t normally make it into our general budget discussion.”

Real-time crime centers are increasingly popular among police departments. They serve as hubs for the ever-expanding arsenals of intelligence tools that local police have at their disposal, typically integrating live camera networks with things like social media tracking or predictive policing tech. They're also controversial — activists say they erode privacy, and some police departments have shuttered them, after they proved too costly to maintain.

It’s not fully clear exactly what tech Mesa plans to buy with the $3.3 million; it will fund the video wall of cameras at the center, plus integration software. But the city already has CCTV cameras and, in May, spent $300,000 on another new, mobile camera system. (The Mesa police chief and the city manager did not respond to inquiries from New Times.)

According to the Atlas of Surveillance, which tracks such centers across the country, there is currently only one other real-time crime center in Arizona, at the Tucson police department. Mesa’s planned expenditures on its project, too, are notably high: Atlanta, which is roughly the same size as Mesa, spent just over a million on its center. Other cities, according to one report, spend far less.

“Because they're expensive, because they’re big, there's a long history of departments doing anything they can to pay for them and for the technology to fill them up,” Guariglia explained. Some departments have even used private donors or corporate sponsors. Then, "they link up to as much surveillance as the department has."

So far, there has been little dissent from the council or the mayor regarding the proposal. Just one council member, Kevin Thompson, inquired about privacy issues during an initial presentation in June. Mesa police chief Ken Cost replied that the policy was “being developed right now.” (In an email to New Times, Kennington clarified that the city already follows federal privacy guidelines on privacy and “will continue to follow these guidelines.”)

“The real problem here is, what recourse does the community have to say, I don’t want you to do that?” Ryan Winkle, former Mesa city councilmember told New Times. He said he thought that the city had sought little buy-in from residents before allocating the money against "the spirit of what it's meant to be."

Mesa would disagree. Kennington says that the city's plans follow federal guidance to bolster public safety with the relief funds: "The Real Time Crime Center does that," he wrote.

But critics argue that the definition is narrow: "Public safety encompasses a lot more," Miller said.

As Guariglia put it: "There's no way to police yourself out of a pandemic. And there's certainly no way to surveil yourself out of a pandemic."
KEEP PHOENIX NEW TIMES FREE... Since we started Phoenix New Times, it has been defined as the free, independent voice of Phoenix, and we'd like to keep it that way. With local media under siege, it's more important than ever for us to rally support behind funding our local journalism. You can help by participating in our "I Support" program, allowing us to keep offering readers access to our incisive coverage of local news, food and culture with no paywalls.
Make a one-time donation today for as little as $1.