Tucson opposes the bill, arguing that it would undermine the city's sovereignty. SD Kirk via Flickr
An industry-backed bill that would curb the ability of Arizona's cities and towns to mitigate climate change at the local level sailed through the Arizona House of Representatives on Wednesday afternoon.

If it becomes law, HB 2686 would prevent Arizona cities or towns from imposing greater fees or restricting permits for buildings that use certain utilities, like gas. None actually do that now, but the bill would stymie future efforts by local municipalities to mandate cleaner energy and air.

Cities and towns “may not deny a permit application based on the utility provider proposed,” the bill reads. Municipalities are also prohibited from charging higher permit fees for some utilities than others, it says, and they are barred from passing codes or ordinances that could “have the effect of restricting a person’s or entity’s ability to use the services of a utility provider.”

In a state that is no stranger to pre-emption laws, the bill’s opponents, including the cities of Phoenix and Tucson, resent the state’s attempt to interfere with local policymaking.

“It’s premature for the state to be jumping in,” said State Representative Kirsten Engel, a Democrat who represents Tucson and who voted against the bill, emphasizing that no municipalities in Arizona are currently trying to do so.

“You’re taking away the ability of cities and towns to say, 'We’re going to limit our fossil fuel footprint of the future,'” Engel added.

The proposed legislation has moved briskly through the legislative process. In back-to-back procedural moves, HB 2686 passed the Committee of the Whole before clearing the full House in a 36-23 vote. A companion bill in the Senate, SB 1222, could potentially receive similarly quick treatment, perhaps as soon as Thursday.

The legislation is sponsored by two of Arizona’s most powerful state lawmakers and backed by Southwest Gas, which sells natural gas service to 2 million people in Arizona, California, and Nevada.

Those sponsors, House Speaker Rusty Bowers and Senate President Karen Fann, both Republicans, each received $4,500 in campaign donations from Southwest Gas or its political action committee last year, more than they received from any other single contributor.

Phoenix and Tucson, Arizona’s biggest cities, both formally oppose the proposed legislation. So does Tolleson, a city west of Phoenix.

“City government is the branch of government closest to the people it serves,” Phoenix Mayor Kate Gallego said in a statement to Phoenix New Times. “We think pre-emption of local control in any form sets a bad precedent.”

“We’re not going to support anything that ties the hands of cities and limits and micromanages what they’re allowed and not allowed to do,” he told New Times. “We think the bill addresses a problem that does not exist.”


“You’re taking away the ability of cities and towns to say, We’re going to limit our fossil fuel footprint of the future.” - State Rep. Kirsten Engel

Indeed, no cities or towns in Arizona have passed or are working on ordinances or issuing permits that would make certain utilities more expensive than others. But cities in other states have, and perhaps someday, the thinking goes, those in Arizona might want to follow suit.

Last year, Berkeley banned natural gas in new low-rise buildings, becoming the first city in the country to do so.

Burning natural gas produces greenhouse gases like carbon dioxide. Natural gas itself also leaks one of its components, methane, another heat-trapping gas. A 2018 study in the journal Science found that methane emissions in the U.S. are about 60 percent higher than estimates by the Environmental Protection Agency.

“They could say, ‘No new construction in our communities is going to have gas,’” said Sandy Bahr, director of the Grand Canyon Chapter of the Sierra Club, referring to the power of local government to regulate fuel sources and encourage cleaner energy. “They could also limit the extension of gas lines into new communities.”

“If you’re taking your climate action plan seriously, you might want to do this,” Bahr added.

Brookline, Massachusetts, also voted last year to ban oil and gas in new buildings, and cities elsewhere in Massachusetts are considering following suit. Other cities and states are also looking to reduce or ban natural gas use or adopt clean-energy goals.

These developments, apparently, inspired Southwest Gas, which sells natural gas in Phoenix, Tucson, Yuma, and other parts of the state, to take action at the Arizona Legislature.

“This was a response to cities in California, Washington, and Massachusetts that have adopted these ordinances,” Tom Savage, senior legislative associate with the League of Arizona Cities and Towns, which was involved in negotiating an amendment to the bill, told New Times.

The League is not taking a position on the bill. Tom Belshe, the League's executive director, said the group was "leaving it to the individual cities to decide where they’re going to be on this particular bill.”

The amendment the League helped negotiate, made public on Wednesday, was aimed at addressing concerns that the language was overly broad and could lead to unintended consequences further down the road, in court.

Several sections of the amended bill also repeat an apparent defense of the bill that is nowhere to be found in the first version: “The regulation of a utility provider’s authority to operate and serve customers is a matter of statewide concern.” 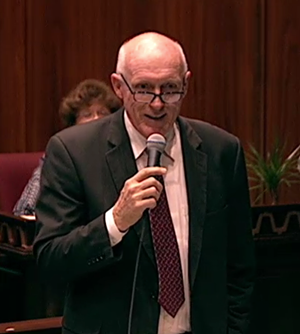 Arizona House Speaker Rusty Bowers speaks in favor of House Bill 2686 on Wednesday, February 12, 2020.
Arizona Legislature
Savage said that the League no longer had concerns about unintended consequences from the bill.

In its latest 10-K filing with the Securities and Exchange Commission, Southwest Gas was explicit about the potential consequences of these changes for its bottom line.

“There have ... been a number of federal and state legislative and regulatory initiatives proposed in recent years in an attempt to control or limit the effects of global warming and overall climate change,” the filing said. “Such new legislation or regulations could result in increased compliance costs for us or additional operating restrictions on our business, affect the demand for natural gas, or impact the prices we charge our customers.”

At the same time, it suggested that, if done right, regulatory changes could also help the company.

“However, increased environmental legislation and regulation can also be beneficial to the natural gas industry. Natural gas is one of the most environmentally friendly fossil fuels currently available and its use can help energy users comply with stricter environmental air quality standards,” it said.

Sean Corbett, a spokesperson for Southwest Gas, said the company was “part of a coalition of diverse Arizona organizations and associations who support balanced and responsible policies to meet our State’s energy needs.”

The proposed legislation would ensure “homeowners, builders, or business owners have access to balanced energy solutions that are efficient, affordable and clean,” he added, citing an industry source saying that homes using natural gas for heating, cooking, and drying clothes saved, on average, $874 a year compared to those using other energy sources.

Corbett said that all of Southwest Gas’s campaign contributions “are made in strict accordance with state laws.”

Bowers, Fann, and a spokesperson for the Senate Republican caucus did not respond to questions about the bills and Southwest Gas’s campaign donations.

In an email to New Times, Andrew Wilder, spokesperson for the House Republican caucus, did not address the issue of campaign donations. In response to a question about why the bills had moved so briskly through the Legislature, he said, “HB 2686 has gone through the same regular process that any other bill does.” 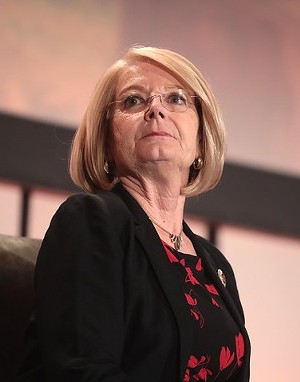 Arkzona Senate President Karen Fann.
Gage Skidmore via Flickr
At least one other utility in Arizona, UNS Energy Corporation, supports the bill. It is the parent company of Tucson Electric Power and UniSource Energy Services, which provides natural gas.

"TEP and UniSource support preserving a diversity of affordable, reliable energy resource options for customers," said Joe Barrios, a spokesperson for both companies.

Neither Salt River Project, a quasi-municipal water and power provider, nor Arizona Public Service, the state’s largest electric utility, have taken sides on the bill, according to their respective spokespeople.

“SRP has analyzed this measure carefully and determined that it is not necessary for us to take a position,” spokesperson Scott Harelson said.

According to Joe Smyth, research and communications manager for the watchdog group Energy and Policy Institute, the proposed legislation in Arizona reflects a trend in other states.

Referring to the changes in Berkeley and elsewhere, he said, “[gas utilities] clearly see these bans on new gas connections as a major threat.”

As Smyth wrote in January, gas companies are spending $1 million on campaigns in Oregon and Washington. Their goal is to prevent municipalities there from following the lead of places like Berkeley and Brookline in banning new gas hookups, and to promote “the importance of natural gas and renewable gas as a significant component of a balanced energy portfolio."
KEEP PHOENIX NEW TIMES FREE... Since we started Phoenix New Times, it has been defined as the free, independent voice of Phoenix, and we'd like to keep it that way. With local media under siege, it's more important than ever for us to rally support behind funding our local journalism. You can help by participating in our "I Support" program, allowing us to keep offering readers access to our incisive coverage of local news, food and culture with no paywalls.
Make a one-time donation today for as little as $1.
Elizabeth Whitman was a staff writer for Phoenix New Times from March 2019 to April 2020.