How Rafi Became the Face of Phoenix 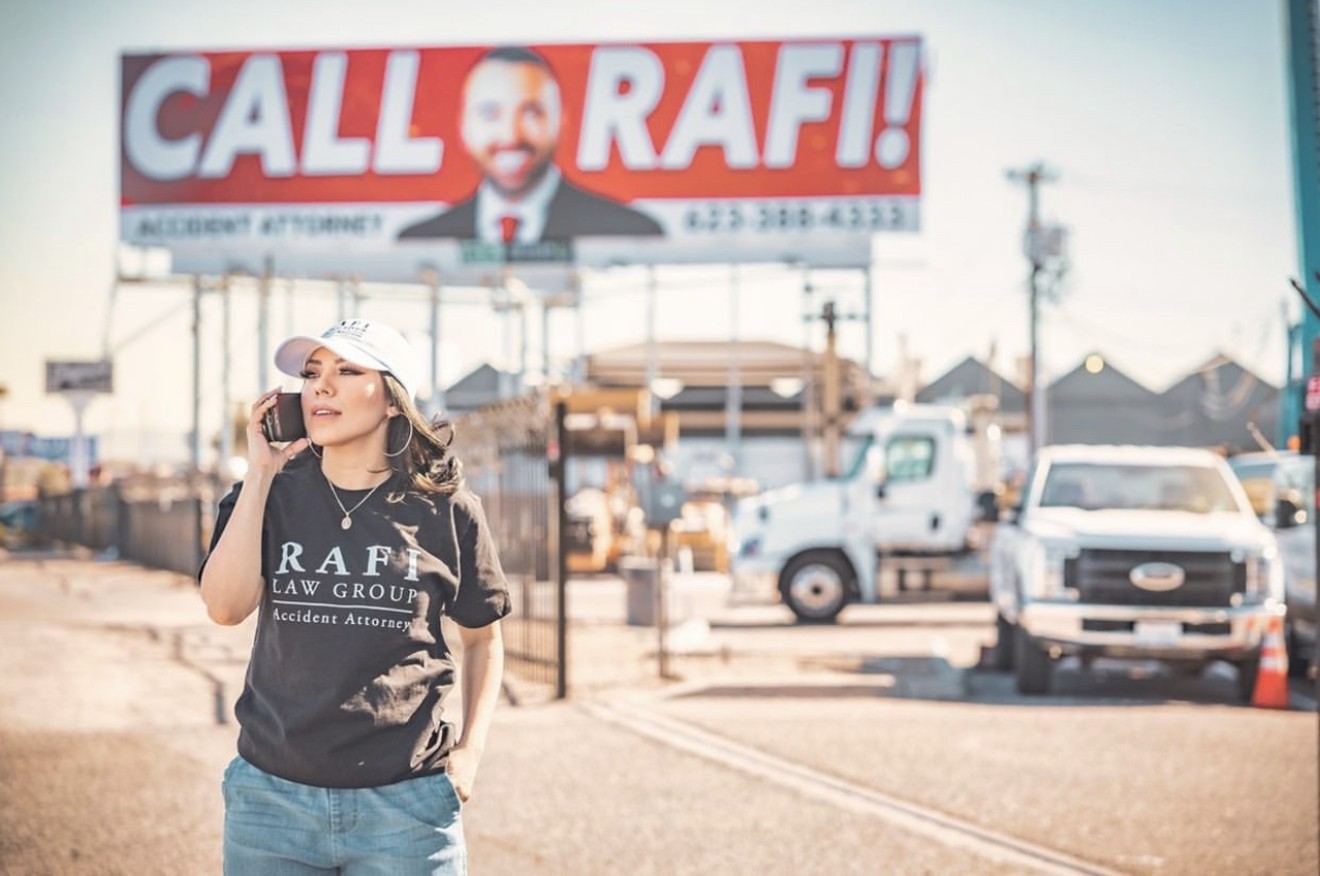 Brandon Rafi is like a cross between Johnny Cash and the fictional TV lawyer Saul Goodman. He's everywhere, man. And if you follow his ubiquitous advice, you'd better call Rafi.


If you live in Phoenix, Tucson, or anywhere in between (and not under a rock), you probably recognize his image — that toothy grin and well-groomed beard against a solid red background that matches his silk necktie. 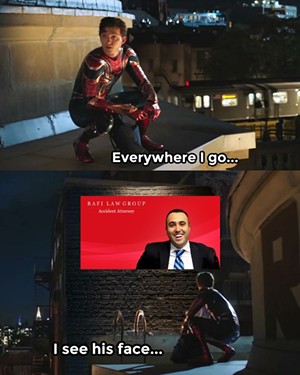 Valley residents love making memes about Brandon Rafi's ubiquity, like this one posted to Imgur and later shared on Reddit.
Imgur

For so many Arizonans, his vermillion billboards, bus shelters, buses, and trains are a hallmark of the daily commute to work. The prevalent advertisements echo a common instruction: “Call Rafi!”

No, not Raffi, the recording artist of Bananaphone and Baby Beluga fame, although that connection is the butt of quite a few jokes about the attorney online, leading to the nickname “Moby Dick.”


The image of Rafi the lawyer is so pervasive it's become the source of a social media phenomenon rife with hilarious memes from the community.

"I like to sue, sue, sue, sue lots of people," one social media commenter posted in 2020 as a play on Raffi's song "Apples and Bananas."

Rafi is a specialist in the field of personal injury law, especially injuries resulting from car accidents. He has helped thousands of Arizonans recover millions of dollars in medical expenses and compensatory damages.

Whether he's throwing out the first pitch at an Arizona Diamondbacks game or greeting visitors with a prodigious sign near Phoenix Sky Harbor International Airport, Rafi is everywhere.


He is a Phoenix native and son of immigrant parents. He matriculated through Brophy College Preparatory, the University of Arizona, and the Phoenix School of Law.


Since then, his presence in the Valley of the Sun has proliferated.


Early this year, a user on the internet discussion forum Reddit coined the adage, “Every morning, a new Rafi sprouts in Phoenix.”


But just how many times does Rafi’s face appear in Arizona?


Nearly 1,000 times, the Valley icon told Phoenix New Times on Thursday. And that doesn't include a perpetual flurry of television, radio, and social media ads.


“We make a point to be everywhere,” he said. Rafi stakes claim to more tangible advertisements than any other law firm in Arizona, including Lerner & Rowe, Suzuki Law Offices, and the Husband & Wife Law Team.


“Advertising is extremely important to getting our message out to our community,” Rafi said. “We want everyone in Arizona to know that we have their back and the most impactful way to do that is through advertising.”


It might be hard to remember a time when lawyers were barred from advertising at all in Arizona, but it wasn’t that long ago.


A 1977 case against the State Bar of Arizona was elevated to the U.S. Supreme Court, which ruled that bans on lawyer advertising were unconstitutional nationwide. 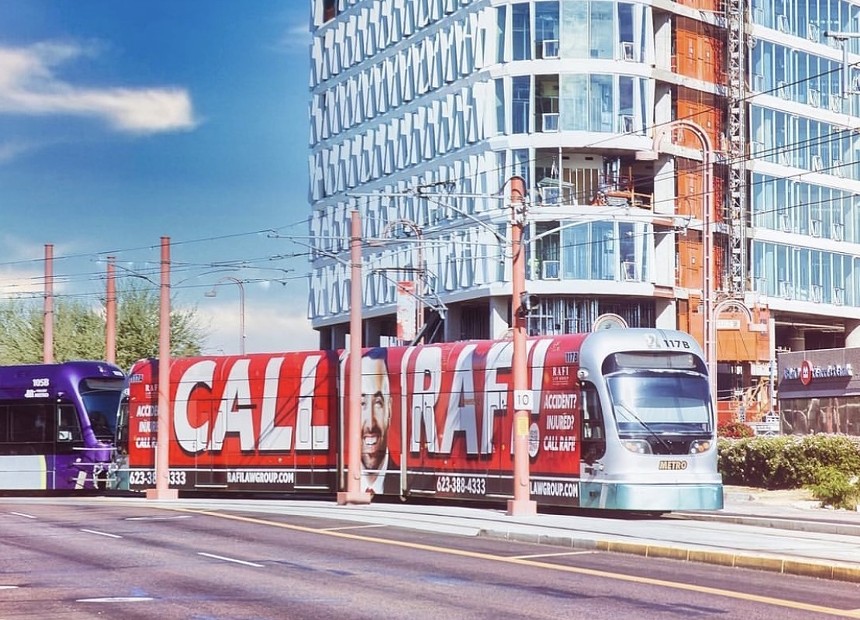 When Rafi founded the Rafi Law Group in 2014, he smartly began building what is now an advertising empire. It has only grown since then.


Trial attorneys splashed out a whopping $1.4 billion on advertising last year, according to a new report from the American Tort Reform Association, a Washington, D.C.-based legal reform coalition.


A 2015 report from the U.S. Chamber Institute for Legal Reform found that 23 of the top 25 Google keywords linking ads to user searches are for personal injury law firms.


Rafi wasn’t willing to reveal how much he spends on ads.


“We get this question a lot, but I’d rather not focus on the budget,” he said. “Our goal is to get our message out there and protect Arizona’s injured and hurt.” Rafi is a diehard Phoenix Suns fan. Before the Suns lost an NBA playoff series against the Dallas Mavericks earlier this month, Redditors joked only Rafi could save the team's season.
Rafi Law Group

And that doesn’t factor in the television, radio, and social media ads. And there are a ton of those.


In fact, Rafi’s omnipresence has become a meme online, especially on Reddit.


Users on the site have reveled in the game of Rafi Bomb, a play on “punch buggy.” Participants punch each other on the arm upon the first sighting of Rafi’s mug while driving around the Valley and exclaim, “Rafi bomb!”


That’s a lot of sore shoulders.

A married couple in Phoenix published a since-privatized YouTube video of themselves playing the game in 2020. Redditors also have created a trove of memes about the lawyer, including a play on a line from the 2021 film Spider-Man: No Way Home — “Everywhere I go, I see his face.” 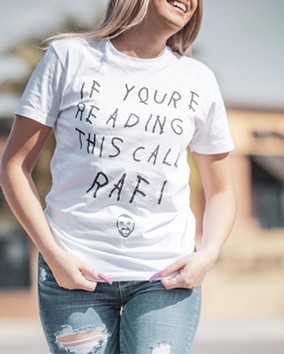 
Rafi himself has joined in the fun with a few memes of his own.


On his Instagram account, the accident attorney posted a photo of custom Nike Air Force 1 sneakers tagged as the “Call Rafi 1s.” He parodied Drake’s 2015 mixtape If You're Reading This It's Too Late and urged Phoenicians to “Make Rafi’s hotline bling.” He even poked fun at the 2021 South Korean hit drama television series Squid Game with a horror-style playground game featuring his iconic headshot.


“We love seeing the memes and hearing about the games people play with our advertising, but I wouldn’t say that was ever the goal,” Rafi said. “We’re keeping up with the changing times and also having some fun on our social media.” The 36-year-old purchased a 6,822-square-foot, modern farmhouse-style home at Del Ray Estates in Phoenix for $3.75 million in 2019. The Arcadia mansion features a man cave with a bar, a 300-bottle wine room, and a pool and jacuzzi overlooking Camelback Mountain.


Now, he’s debuting a new jingle, some new Instagram filters, and new merch that, Rafi said, is “spreading like wildfire all over the state and on social media.” He also promised there are plenty of surprises in store.


“There are other attorneys in town?” Rafi asked in jest. Rafi Law Group
KEEP PHOENIX NEW TIMES FREE... Since we started Phoenix New Times, it has been defined as the free, independent voice of Phoenix, and we'd like to keep it that way. With local media under siege, it's more important than ever for us to rally support behind funding our local journalism. You can help by participating in our "I Support" program, allowing us to keep offering readers access to our incisive coverage of local news, food and culture with no paywalls.
Make a one-time donation today for as little as $1.
Elias Weiss is a staff writer at the Phoenix New Times. A native of Charlotte, North Carolina, he reported first for the Northwest Arkansas Democrat-Gazette and was editor of the Chatham Star-Tribune in Southern Virginia, where he covered politics and law. In 2020, the Virginia Press Association awarded him first place in the categories of Government Writing and Breaking News Writing for non-daily newspapers statewide.
Contact: Elias Weiss
Follow:
Twitter: @ecweiss