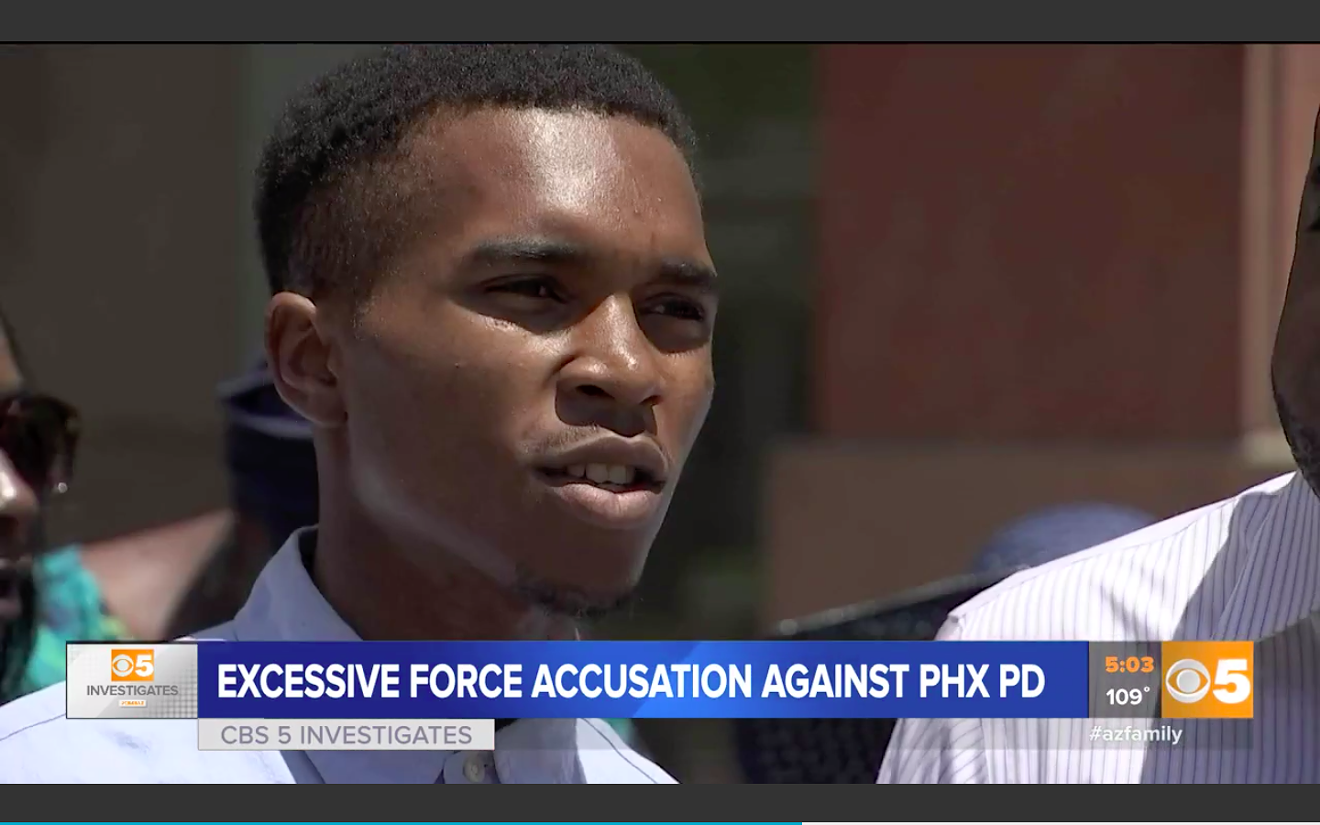 Dravon Ames at a press conference on Wednesday. Screenshot of video from AZFaimly
Update: This story was updated on Friday, June 14, with a statement from Phoenix police. See below.

Shocking footage of a Phoenix police officer telling a 22-year-old man, "I'm gonna put a fucking cap in your fucking head" has sparked backlash against a department already reeling from the revelation last week of racist social media posts from officers.

Now, the man and family in the video — Dravon Ames, his pregnant fiancée, Iesha Harper, and their two young children — have filed a notice of claim against the city of Phoenix. The family is seeking $10 million in damages. Former Arizona Attorney General Tom Horne is representing the family.

"The police officers committed battery, unlawful imprisonment, false arrest, infliction of emotional distress, and violation of civil rights under the fifth and 14th amendments of the United States Constitution," the claim states.


"My hands are up! My hands are up!" 22yo Dravon Ames says as a Phoenix police officer yells to "get your fucking hands up." The same officer later says "You're gonna fucking get shot!"

Ames says the officers stopped him after his child walked out of a Dollar Store with a doll. pic.twitter.com/Nlkd7IXsyc


Video of the May 29 encounter with Phoenix police near 36th and Roosevelt streets show several Phoenix police officers, some with guns drawn, surrounding the car of the couple and their two young children. It's unclear what preceded the encounter, but Ames said it all began after their daughter walked out of a Family Dollar store with a doll.

In the video, officers can be heard screaming and cursing at the couple in front of their children to "put your fucking hands up." One officer can be seen pointing a gun at the car with the children inside, while another can be heard saying, "You're gonna fucking get shot!"

At one point, an officer slams Ames' face against a police car, then kicks his legs apart. Meanwhile, another officer attempts to yank Harper's 1-year-old daughter out of her arms.

According to the notice of claim, the officer also punched Ames in the back while he had him pressed up against the police vehicle. Ames, who works at a warehouse, said he has suffered physical injuries as a result of the encounter.

The family also alleges that one of the officers injured their 1-year-old child when he attempted to yank the baby out of Harper's arms.

"The first officer grabbed the mother and the baby around both of their necks, and tried to take the baby out of the mother's hand. He told her to put the baby on the ground, which she was unwilling to do because the baby could not walk, and the ground consisted of hot pavement," the notice of claim states.

"The first officer pulled the baby by the arm to get her away from the mother, which injured the arm, in a condition known as 'dead arm.' Island [the couple's 1-year-old child] has been having nightmares and wetting her bed, which she has not done before this incident," it states.

Harper also alleges one of the officers told her he "could have shot you in front of your fucking kids" while she was detained and handcuffed in the back of a police car.

Phoenix police say they're investigating the incident, but did not respond to emails from Phoenix New Times asking for an interview with Chief Jeri Williams and for the names of the officers involved. Ames believes the especially aggressive officer's last name may be Meyer, Meyers, or Myers, according to the notice of claim.

Phoenix police commented to ABC15 (KNXV-TV) that the officer who cursed, threatened, and roughed up Ames is on a "non-enforcement assignment." The other officer who pointed a gun at Harper and her children inside the vehicle remains on patrol.

Footage of the incident spread quickly online and sparked backlash, with dozens of people, including a few state lawmakers, criticizing the department for having officers on the force as irrationally aggressive as the ones seen in the video.

This is everything that's wrong with #LawEnforcement today. My #LD29 #Maryvale community deserves better than this type of inexcusable and unjustifiable rage and abuse of power from the @phoenixpolice. @PHXDistrict5 @PhxDistrict8 https://t.co/VXj0myV1Qo


Is this the appropriate response from #Phoenix police officers when a small child accidentally takes a doll from the dollar store? You can hear the children crying in the background. #smh https://t.co/1RhDkovJU1


"We're thinking we're gonna get shot cause he kept threatening, 'I'm gonna shoot you in the face,'" Ames told New Times on Wednesday "We were so scared."

Two videos recorded by residents of the apartment complex begin in the middle of the encounter. It is unclear from the videos what preceded it or why the officers are using such force to detain the couple. The Phoenix Police Department has not provided any additional information about the incident, but did confirm in a statement on Facebook that the interaction was prompted by a "shoplifting incident."

Hey, @phoenixpolice: This poorly-trained, high-strung, emotional nuclear bomb was on the edge of turning this traumatic incident into something much worse. He is a menace to the public and you need to fire him NOW. https://t.co/zmYzxhfJJK

This is sad.
That officer clearly has emotional issues and should not under any circumstances be allowed to carry a firearm and wear a badge.
But we know how this will play out.#UnitedStatesofAtrocity https://t.co/gwLvSj5LcW

This is insane! @phoenixpolice this officer should be suspended IMMEDIATELY. Completely unacceptable! https://t.co/N0VVz9JP3q

@phoenixpolice this is absolutely disgusting. This is how you train your cops? Cops who demand respect but cannot give respect in return. I’m so thankful this family did not lose their lives today. I thought the point was to protect your citizens- not target them. DO BETTER! https://t.co/IYQnvNY9C3

Come on .@phoenixpolice Do you really hire losers like this? Your officers have to kick folks in handcuffs and threaten to shoot women holding babies? All over a stolen doll one of the children took? You can do better. Fire those creepy officers please. https://t.co/2wKFMGRFa2

@phoenixpolice this is out of control. That officer is a bully and stain to the service men and women in your department. Get it together and do something about this officer who is obviously over stressed and/or dealing with anger management. https://t.co/9z5Gj89vXU

Who is this officer @phoenixpolice? He should be immediately fired. Is this how you train your officers? Yelling that he’s going to shoot American citizens in the face IN FRONT OF THEIR CHILDREN, while they are trying to comply? Absolutely DISGUSTING @PhxPDChief https://t.co/xfPq26DT7r


Ames told New Times he had just pulled into the parking lot of an apartment complex to drop off his kids with a babysitter when Phoenix police officers surrounded the car and told them to get out. Ames alleges that Phoenix police approached him because, unbeknownst to him, his daughter had walked out of the nearby Family Dollar holding a doll from the store. Someone at the store told an officer on security detail that his daughter had stolen from the store, he said.

He also said that despite being detained for a time in the back of police vehicles, both he and Harper were not arrested or ticketed.

Update: Around 2 p.m. on Friday, the Phoenix Police Department released a statement containing more information about the events preceding the altercation. The statement indicates the officers did not believe the family to be in possession of any weapons. Police say they pursued the family because they allegedly stole food and underwear from a dollar store.

"On May 27, 2019, at approximately 11:17 a.m., a Phoenix Police Officer was investigating an unrelated shoplifting at a store in the area of 1600 N. 36th Street, when he was advised by store employees of another shoplifting. The officer was directed to some individuals who were getting into a vehicle. He observed a woman drop a “food foil,” when she saw him. As he walked towards the vehicle, the car quickly backed up and started to leave parking lot. It stopped at McDowell Road, and one of the women got out and the car drove away. The woman was detained by the officer. It was later found the woman he detained had three misdemeanor warrants for her arrest. She was later booked for the warrants.

A description of the vehicle was broadcasted over the radio. The vehicle was located a short distance from the store near 32nd Street and McDowell Road and followed it was followed into the parking lot of an apartment complex in the area of 3200 E. Roosevelt Street, where a man and woman in the car were taken into custody and detained. After being advised of her rights, the woman who had been detained, said her aunt and child went into the store and when she saw her child walk out of the store with a doll, she believed they had stolen it, because they didn’t have any money.

She heard the officer who approached the car in the parking lot tell the driver to stop several times, but he didn’t. After being advised of his rights, the man said he knew they had shoplifted from the store and that he threw a pair of underwear out the window, because he knew they were stolen. In addition, he stated he knew he was driving on a suspended driver license. Because the property was returned, the store employees said they did not desire prosecution, so no one was charged with the shoplifting. The man however, was cited and his vehicle was impounded, due to his driving on a suspended license."
KEEP PHOENIX NEW TIMES FREE... Since we started Phoenix New Times, it has been defined as the free, independent voice of Phoenix, and we'd like to keep it that way. With local media under siege, it's more important than ever for us to rally support behind funding our local journalism. You can help by participating in our "I Support" program, allowing us to keep offering readers access to our incisive coverage of local news, food and culture with no paywalls.
Make a one-time donation today for as little as $1.
Meg O'Connor was a staff writer for Phoenix New Times from April 2019 to April 2020.