"Save our homes!" one sign read. "Grand Canyon University is leaving families homeless," was another.

Most of these protesters on Tuesday afternoon are residents of the Periwinkle Mobile Home Park, a small trailer setting right on the edge of Grand Canyon's west Phoenix campus. In October, everyone in this community will be forced to leave their homes. As of now, the only compensation most will receive is $1,875, from a state fund for trailer relocations.

That was not enough, protesters said.

Grand Canyon University, despite its legal troubles and contested nonprofit status, has been working to expand its Phoenix campus. Its revenue, assisted by high online enrollment, has been going up. As a result, the university has, in the last several years, begun to buy up property. In 2016, GCU bought the Periwinkle trailer park.

At the time, the broker who negotiated the deal called it part of Grand Canyon's "aggressive" property acquisition strategy. "GCU is one step closer to controlling the entire area surrounding its main campus," said the broker, John Kobierowski at ABI Multifamily. In the two years prior to the sale, from 2014 to 2016, the university went on a shopping spree, purchasing more than 100 acres of land.

For years, GCU has been an unobtrusive landlord for residents of the mobile home park. In April, though, the university delivered a letter to each of Periwinkle's 50 or so trailers. The park was being redeveloped into apartment-style student housing.

Residents, the letter read, had until October 30 — six months — to leave their homes.

A spokesperson for Grand Canyon University, Bob Romantic, did not respond to multiple requests for comment from Phoenix New Times. However, Romantic told the Arizona Republic last month that the university "has taken steps to make the transition as seamless as possible," and would work with residents on an individual basis.

But multiple residents who spoke with New Times said they had heard nothing from the university. All they received was the April letter informing them of the date they needed to go.

In Phoenix, trailer parks have increasingly become a battleground. Many of these parks house immigrant and low-income families who have built their lives there. Because most of these families own their trailers, the parks provide more stability than rental housing.

But these parks are also profitable investments — and investors are buying them at a fast clip, to redevelop them into high-rises or turn them into short-term, luxury stops for snowbirds in their RVs. In December, New Times revealed that an out-of-state investor attempting to evict residents from one Mesa trailer park had bought more than a dozen other parks across the state in the last two years.

"Injustices like this are not just happening here. They're happening everywhere, especially to poor families," longtime Phoenix organizer Salvador Reza told the crowd on Tuesday. Reza has focused on organizing trailer park residents lately. He also worked with the residents of the Mesa trailer park who were threatened with an eviction. After protests, and media reports, the property owner rescinded the notice, and has not yet issued a new one.

Reza and the residents who spoke had a demand for the university: fair compensation for their trailers.

Gerald Suter, 83 years old, has lived in the Periwinkle Mobile Home Park for 28 years, he told New Times on Tuesday. "A third of my life," he emphasized. Suter said he had no idea what he would do if the park were shuttered.
click to enlarge 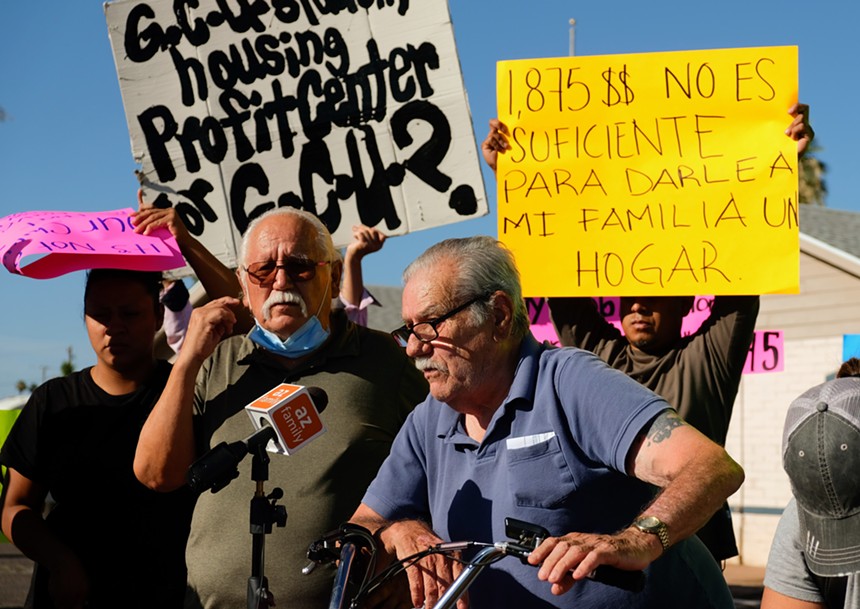 The state of Arizona offers decent compensation for people looking to relocate their trailers when faced with an eviction: up to $12,500 for relocation costs of certain types of mobile homes. But many trailers in parks like Periwinkle are too old, or too structurally unsound, to be moved. Even if they could be, they wouldn't be accepted by many local trailer parks, which often restrict trailers built before a certain year.

The only option for these residents is to abandon their trailers at the lot. The state offers more meager compensation for those who select this option: a little over $1,800.

So far, Grand Canyon University has offered nothing.

Suter's trailer, like many of the mobile homes in the park, is too old to be moved. And $1,800, he said, was unfair compensation. He balked at the idea of abandoning his longtime home to the state. "No," he said. "I'll burn it first."

Despite his age and, he said, a recent heart attack, Suter was out in the sun with the rest of the crowd, riding a bicycle along the sidewalk. His sign read: "Grand Canyon University — it's your school, but it's also my home."

One man, standing with his wife and young son, told New Times that he decided to attend in order to advocate for his family. He identified himself only as Jorge. He is the sole provider for his family, he said, and works at a flooring installation company. The small family has lived in the trailer park for eight years, since Jorge's wife was pregnant with their son.

Jorge said, in Spanish, he understood the university was growing, yet wondered: 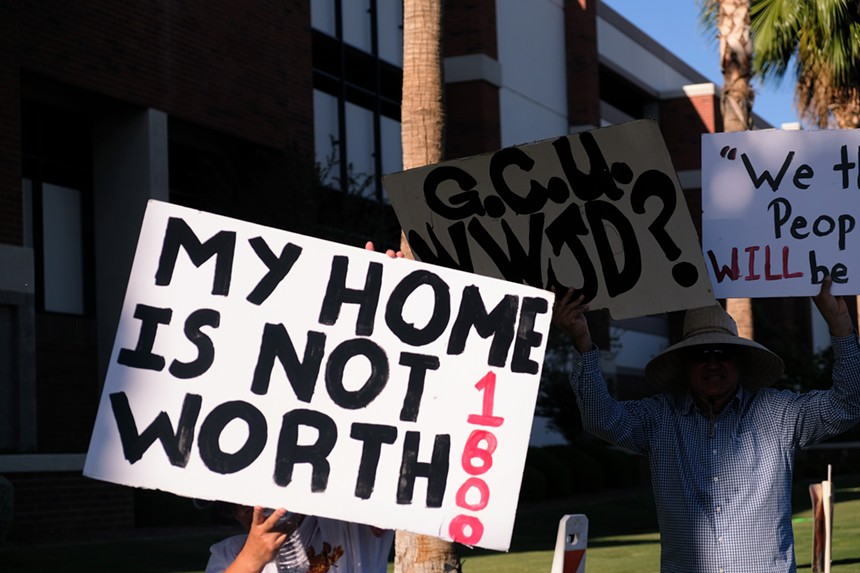 Protesters on Tuesday march down Camelback Road to the main entrance of Grand Canyon University.
Katya Schwenk
KEEP PHOENIX NEW TIMES FREE... Since we started Phoenix New Times, it has been defined as the free, independent voice of Phoenix, and we'd like to keep it that way. With local media under siege, it's more important than ever for us to rally support behind funding our local journalism. You can help by participating in our "I Support" program, allowing us to keep offering readers access to our incisive coverage of local news, food and culture with no paywalls.
Make a one-time donation today for as little as $1.