10 Places to Get Your Bloody Mary Fix in Metro Phoenix 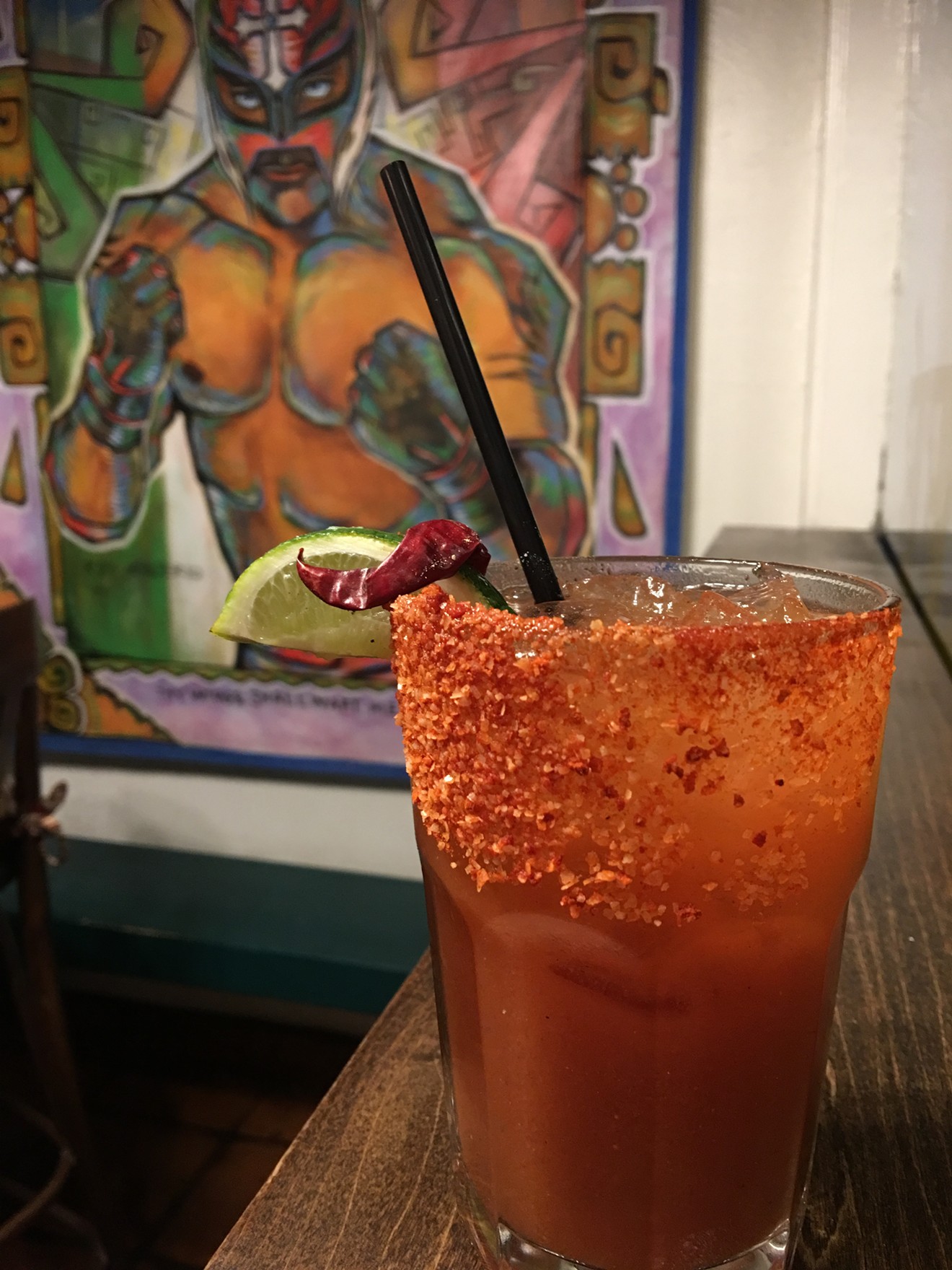 The Bloody Maria from Barrio Café with chile de árbol. Barrio Café
There's no more iconic breakfast drink than the bloody mary (yes, we are fully ignoring the mimosa and coffee). And while many places can whip one up, there just a few versions naturally standing out. These 10 savory morning cocktails are worth seeking out any time of day, even if you aren't in need of a hair-of-the-dog tonic. But be warned: Not all of these are available all the time.

2814 North 16th Street
Of all the bloody marys on this list, this is the only one without any vodka — instead there's Herradura Silver tequila. The Bloody Maria from Barrio Café is a spicy drink, topped with a lime wedge and a chile de árbol that's trimmed with a spicy salt rim that runs about halfway down the glass. 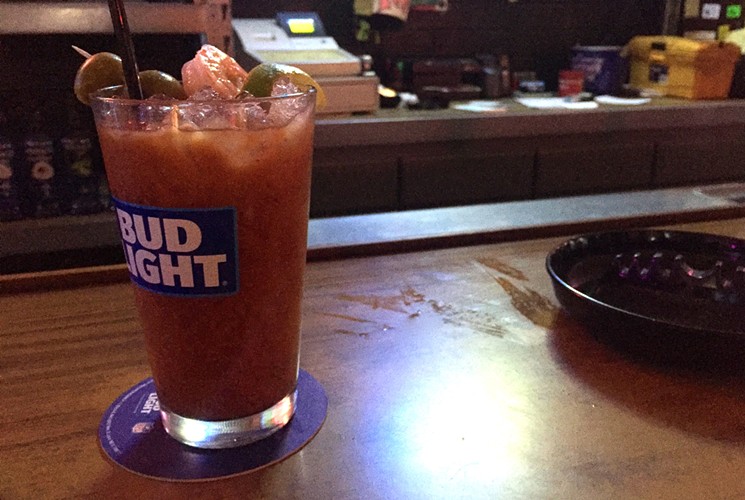 The much talked-about bloody mary at Hambone Sports Bar in Mesa.
Lauren Cusimano

903 East Main Street, Mesa
Word has traveled far about the phenomenal bloody mary at this unassuming Mesa pool hall. Longtime bartender Mel makes a mean drink, and her personal bloody mary concoction deserves all the chatter. The spicy drink comes in a standard pint glass topped with fresh lime, olives, and a shrimp. The light rail runs right past Hambone Sports Bar, so feel free to have a few. 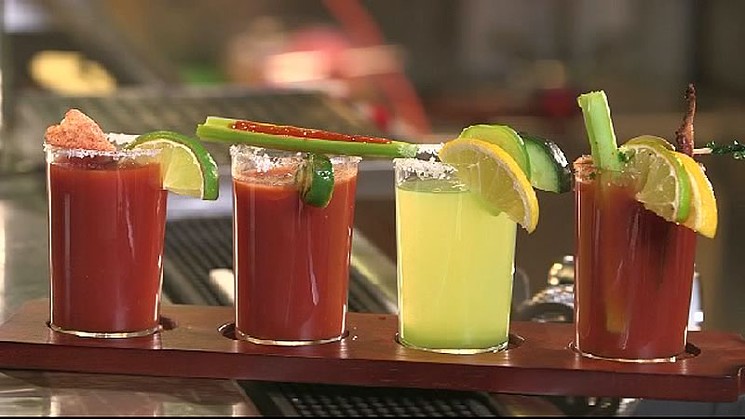 1701 East Warner Road, Tempe
The Tempe location of Oink Café offers six bloody marys: the Classic, the Braveheart (made with Scotch whiskey), the Bloody Maria, the Spicy Thai (heavy on the Sriracha), the Verde Mary (the only green drink on this list), and the Oink Bacon bloody mary. If you can’t possible choose, Oink offers a bloody mary flight of four of the available six. 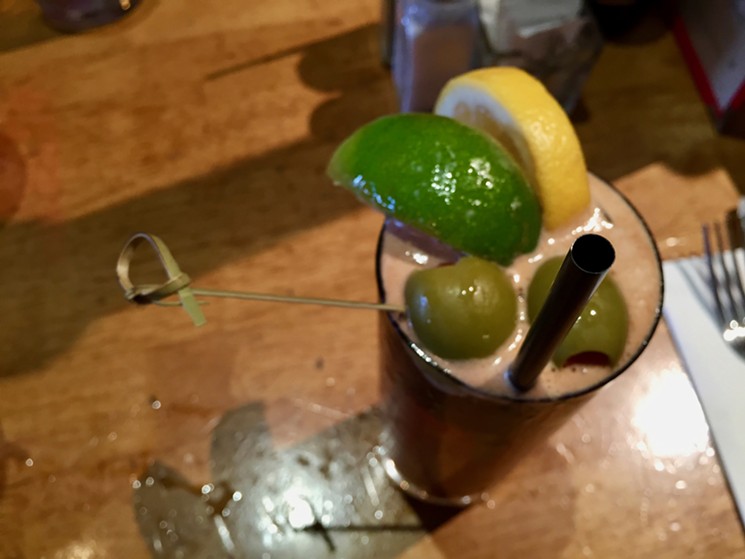 The Rula Bula bloody mary is under the Tempe pub's Hair of the Dog specials.
Lauren Cusimano

401 South Mill Avenue, Tempe
What would a weekend stroll along Mill Avenue be if it didn’t have a good hair-of-the-dog stop or two? And Rúla Búla — the classic Tempe Irish pub and restaurant — should definitely be one of them. The Rula Bula bloody mary can be found on the brunch menu under the Hair of the Dog specials. It comes topped with lemon, lime, olive, and a splash of Guinness, just for good measure. Brunch is served from 10:30 a.m. to 2 p.m. every weekend. 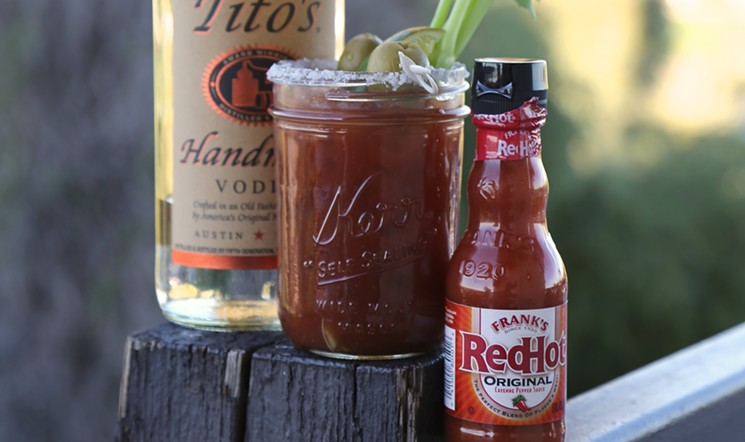 8383 South 48th Street
At one of the Valley’s best-known Western theme restaurants, Rustler's Rooste, has the Tito’s Texas bloody mary. This savior is served in a Kerr wide-mouth Mason jar and dressed with a salted rim, olive, lime wedge, and leafy stalk of celery. Your bartender will likely encourage you to try it with a splash of Frank's RedHot, and we suggest you comply. 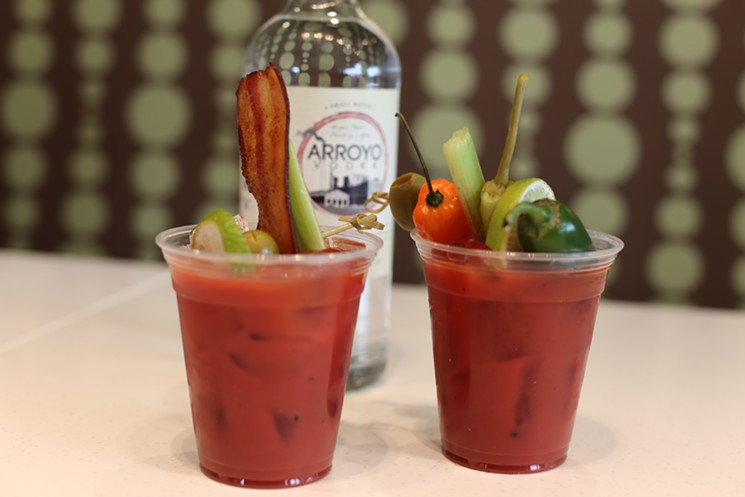 Scramble in Scottsdale has the Bacon Infused Bloody and the Rattlesnake.
Scramble

Scramble, A Breakfast and Lunch Joint 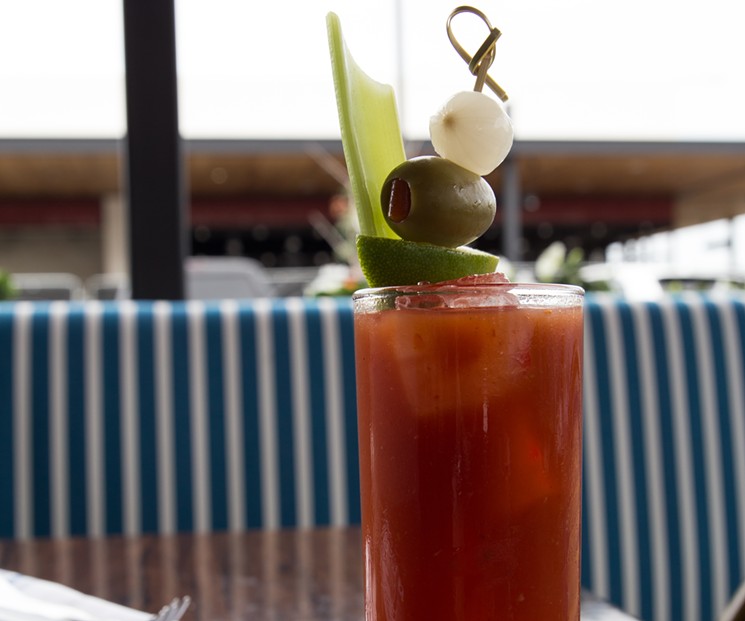 5538 North Seventh Street
The brunch menu at The Colony's anchor restaurant offers food, yes, but just as important, it lists the signature Stock & Stable bloody mary. You’ll get a tall glass of morning relief dressed with a celery stalk, and skewered lime, olive, and onion. The drink is available from 10 a.m. to 2 p.m. on Saturday and Sunday. 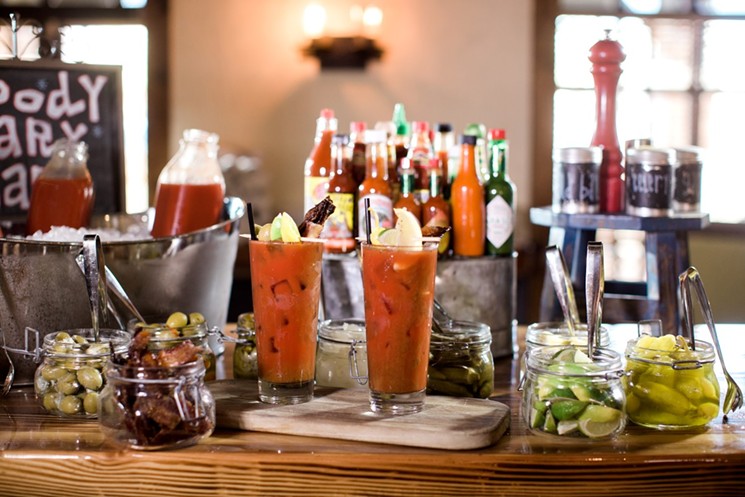 8220 North Hayden Road, Scottsdale
Brunch at Twisted Grove is up and running from 10 a.m. to 2 p.m. on Sundays. That means for one day only you can grab the Crafted Bloody Mary. It contains a house-made mix with 360 Vodka — ordered spicy or not. And what's more, you can add bacon for an extra buck. 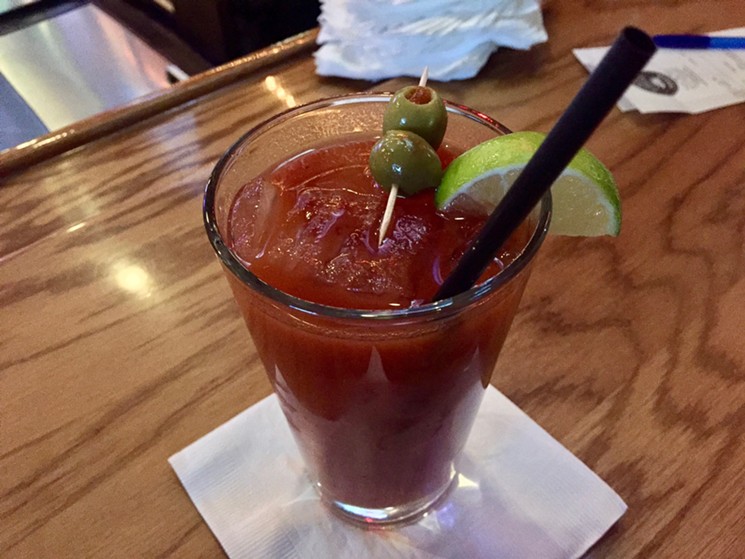 29 West Southern Avenue, Tempe
The ultimate morning drink meets the ultimate morning bar at Yucca Tap Room. They don’t get fancy here with the house bloody mary, but it gets the job done. Opening daily at 6 a.m., the mix of vodka, tomato juice, olive, fresh lime, and more vodka is available at the Yucca Tap Room 20 hours a day, seven days per week. 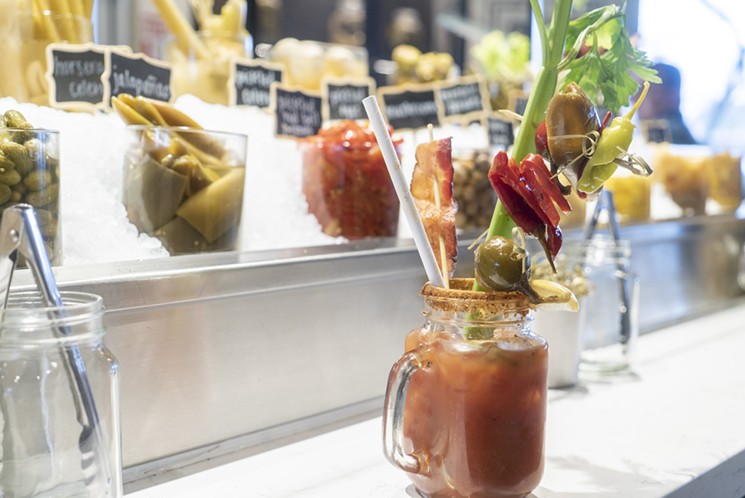 Multiple Locations
For the unfamiliar, Hash Kitchen is the spot for bloody marys, and that's due entirely to its 60-item, build-your-own bloody mary bar. Pick your own house-infused vodka flavor, then your scratch-made bloody mary mix, then your salt. Then, you top, with options including everything from pickles, olives, bacon, and vegetables to beef jerky and fried ravioli.

Editor's note: This story was originally published on July 14, 2017. It was updated on January 1, 2020.
KEEP PHOENIX NEW TIMES FREE... Since we started Phoenix New Times, it has been defined as the free, independent voice of Phoenix, and we'd like to keep it that way. With local media under siege, it's more important than ever for us to rally support behind funding our local journalism. You can help by participating in our "I Support" program, allowing us to keep offering readers access to our incisive coverage of local news, food and culture with no paywalls.
Make a one-time donation today for as little as $1.