Pecking Around for the Best Local Southern Fried Chicken 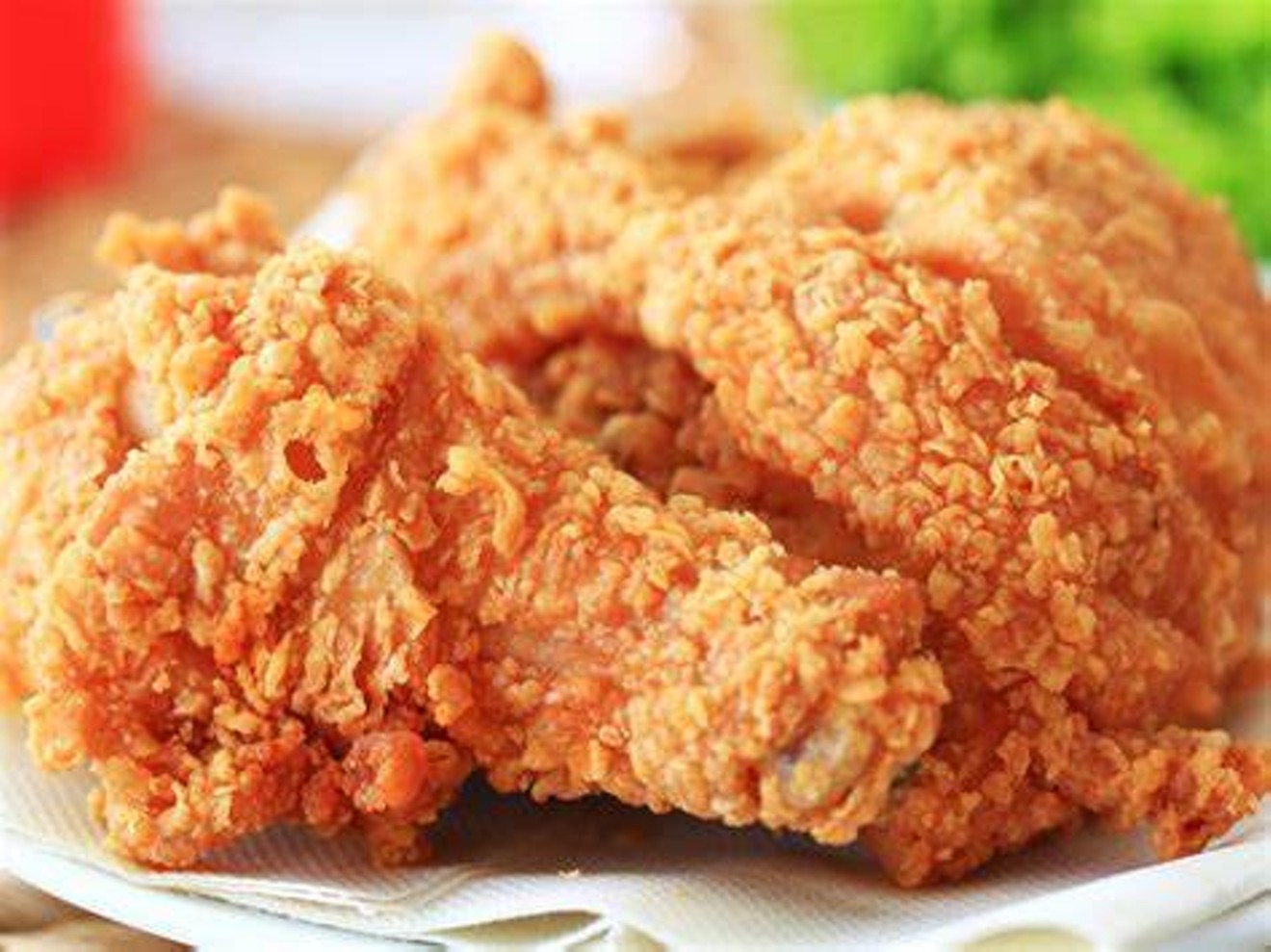 Southern-fried chicken's a trend around here. Who's is the best? Off da Hook
I have a friend who forces me to eat fried chicken.

This is better than the guy I know who only calls me when he has something heavy to move. And then there's a woman I'm acquainted with who's hugely flatulent and only ever wants to talk about nipple piercings — hers.

So Carolyn's fried chicken thing is much easier to bear. Whenever I'm heading to my house back east, she's up my ass about where I'm going to go to eat fried chicken once I arrive there. "Are you going to that café with the coat rack?" she'll text. "Send me a photo of the fried chicken." Or "Remember that drive-through place we went to in Youngstown, the one with the pan-fried chicken thighs?"

She recently suggested a tour of all the southern fried chicken places that have been popping up around town the last year or so. "How about we just pick three," I suggested, "compare them, and decide who's best?"

I could tell Carolyn wanted more, but she caved when I said she could help decide which three and that she could pick the sides. She chose Gus’s Fried Chicken, a franchise diner on East Van Buren, and Monroe’s Hot Chicken, a local chain store on West Jefferson. I went with Stacy's Off da Hook, a locally-owned soul food place where I remembered eating southern fried chicken and which Carolyn reminded me serves Kool-Aid, which seemed to excite her somehow.

We ordered takeout and headed to my place, where we dug into a lunch-sized order from Gus's. They'd served us a chicken breast as big as my head, and while I don't love white meat, even when it's deep-fried, this breast was juicy despite its colossal size. The skin was nicely spiced with garlic salt and green herbs and clotted with crunchy breading.

Carolyn liked Gus's mac and cheese more than I did. She was impressed that the cheese wasn't especially subtle; she wanted, she said, for a cheese to shout, "I'm cheddar!" I thought the noodles were too small and soft but agreed that the buttery cheese sauce was nice and sharp.

Gus's potato salad was very, as Carolyn put it, "potato salad-y." It was slightly sweet and not too eggy, with just enough mayonnaise to bind it nicely. The potato chunks were large, still clad in their skins and dotted with bits of red onion. "Am I tasting yellow mustard?" I asked Carolyn, who wasn't sure because she rarely eats potato salad and prefers not to think about mustard.

Although I'd also ordered potato salad from Monroe's, they'd neglected to include it in our takeaway bag. No matter — the spicy chicken distracted us. Carolyn deemed the chicken thigh "fine," less moist but zestier than Gus's. I thought Monroe's breading had the nicest crunch and liked how the dry spice rub was distinct but didn't overpower the taste of the juicy chicken and crispy skin.

I thought Monroe's mac and cheese was better than Gus's, with a nice hot pepper kick and a mild cheese sauce clumped onto traditional elbow macaroni. We'd also ordered a side of cornbread, large and dense enough to stun an ox, and agreed that it was both moist and gritty with sweet cornmeal.

Off da Hook was, I thought, the hands-down winner of our fried chicken pageant. The thick, crusty breading on both the drumstick and the breast was perfectly Cajun-spiced with hints of cayenne and paprika. Carolyn found Off da Hook's breading too salty, though she appreciated how crisp it was and thought that visually it looked like the most perfect fried chicken ever made.

I liked their garlicky mac and cheese — made with big, hearty cavatappi noodles blobbed with stringy, sharp cheddar — more than Carolyn did; she preferred Gus's because she explained, "I have very pedestrian taste in such things."

I tried to get her to reconsider, offering another spoonful of Off da Hook's mac and cheese, but Carolyn was done with southern cooking and was thinking about dessert. There was, she told me, this new ice cream place on Osborn Road that she'd been meaning to try. She thought if we left now, we could hit three or four ice cream places before dinnertime.
KEEP PHOENIX NEW TIMES FREE... Since we started Phoenix New Times, it has been defined as the free, independent voice of Phoenix, and we'd like to keep it that way. With local media under siege, it's more important than ever for us to rally support behind funding our local journalism. You can help by participating in our "I Support" program, allowing us to keep offering readers access to our incisive coverage of local news, food and culture with no paywalls.
Make a one-time donation today for as little as $1.