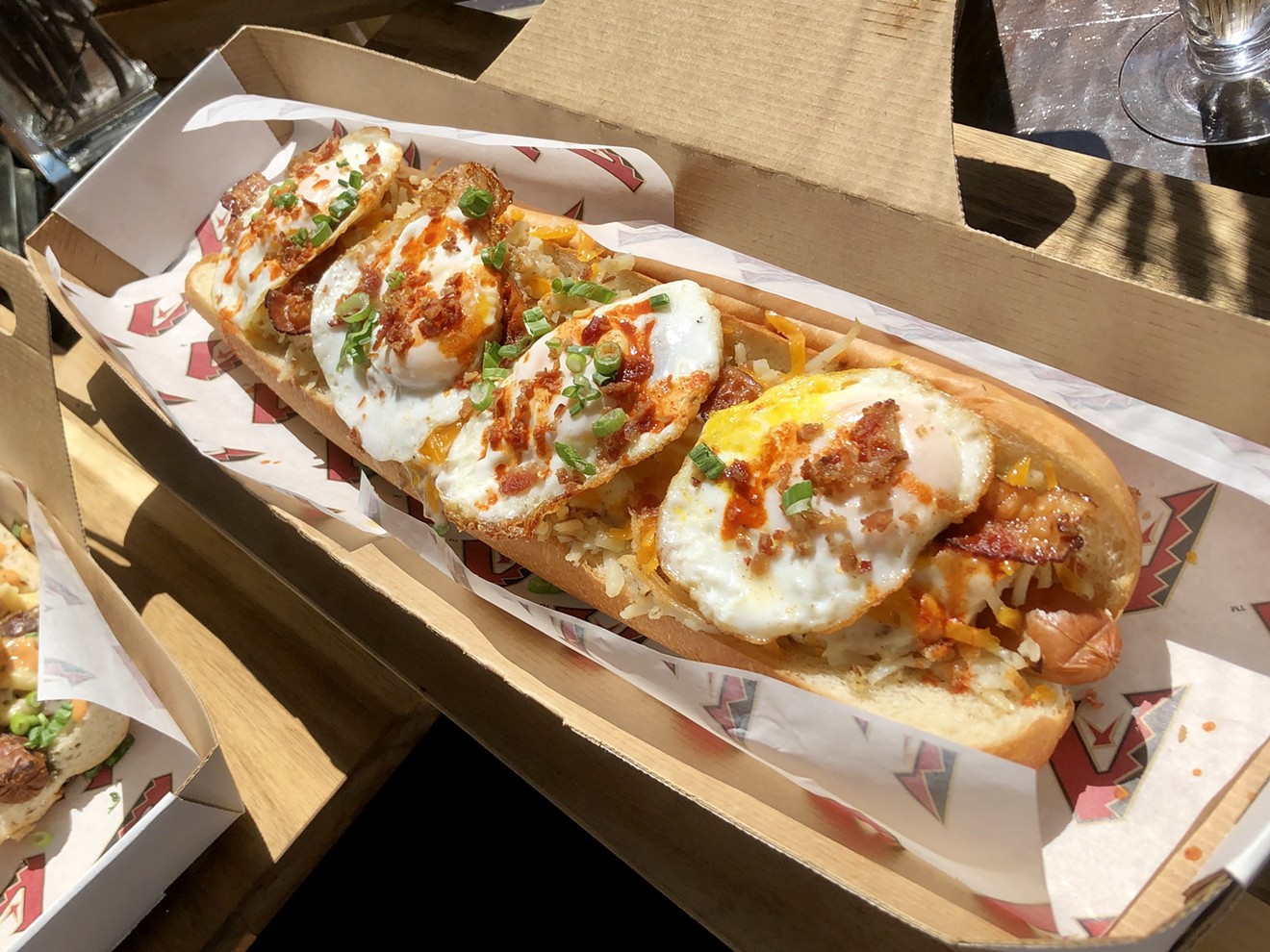 The 18-inch All Day Breakfast Dog, created by Chase Field chef Stephen Tilder. Lauren Cusimano
Half the fun of going to a baseball game, if not more than that, is the food. You can already imagine over-the-top ice cream or a crazy hot dog. At Chase Field, they call these “wow items” — meaning people literally say “wow” when watching others walk by juggling a super-stacked burger and giant beer. For 2019, a few more wow items have been added to the menu.

The S.I. Cover Dog created in collaboration with Sports Illustrated's Charlotte Wilder — meaning it has pickles.
Lauren Cusimano
The breakfast dog is topped with hash browns, country gravy, bacon, fried eggs, cheddar, Tapatío hot sauce, and green onions. “I love anything hot,” Tilder says, referring to the Tapatio topper. “When someone walks through the concourse with this thing, it’s a head-turner.” The All Day Breakfast Dog is the first 18-inch dog available this season, around in April and May.

Next, the Reuben-with-a-twist dog is served on a rye bun and topped with Reuben mac and cheese, pastrami, fried pickles, secret sauce, and green onion, and is available in June and July. Last, the S.I. Cover Dog is Schreiner’s bratwurst in an onion bun with jalapeño-Granny Smith apple coleslaw, fried mac and cheese, barbecue aioli, house-cured beer pickles, and green onion. It’s available in August and September to finish off the season.

All three very shareable dogs are $30 at Big Dawgs in section 126. 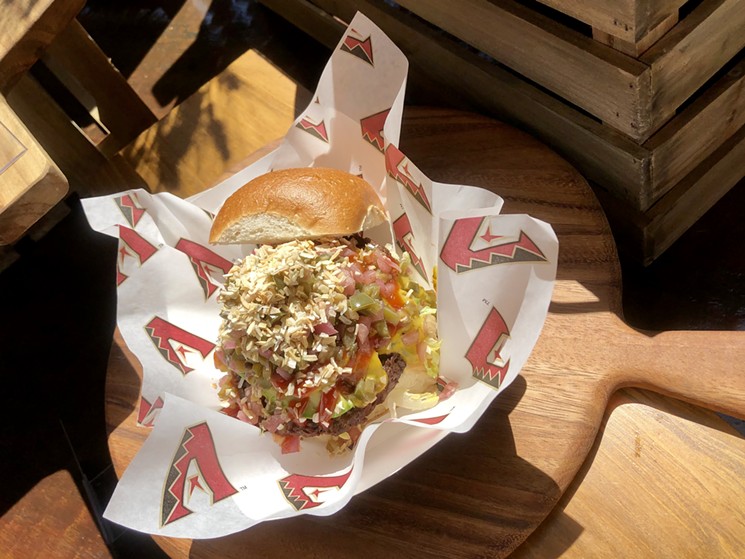 The vegan Camelback Burger.
Lauren Cusimano
Additional new, season-round food items include one more mean dog. The only-12-inch Big Jalapeño Popper Dog has jalapeño cream cheese, bacon, fried jalapeños, and onions, and can be picked up at Big Dawgs for $15. The Chicken and Donuts dish is Tyson chicken and doughnut holes drizzled in powdered sugar with a side of maple syrup, and is available at Gonzo’s Grill for $11. The 505 Fry Bread Taco is packed with ranch beans, carnitas, cheddar, lettuce, tomato, sour cream, and 505 Southwestern green chile sauce, and is offered at Taste of Chase for $14.

For vegan diners, the Camelback Burger is a plant-based patty with brown sugar-truffle ketchup and herb mustard, jalapeño relish, avocado, lettuce, cucumbers, and tons of dried onion flakes on a vegan bun for $14 at Paradise Valley Burger Co. Another vegan option is the Mediterranean Vegan Wrap at Taste of Chase and Burger Burger for $12.

The new Chicken and Donuts dish.
Lauren Cusimano
And for something sweet, the strawberry cheesecake shake is made with Danzeisen Dairy strawberry milk, soft serve, strawberries, graham cracker crumbs, New York cheesecake, and chocolate, topped with whipped cream, and rimmed with more graham cracker. That’ll run you $10 at either Sizzle & Cheese or Taste of Chase.

Additional season-long items include the cheesy BLT and the American cheese and fries dish, both at Sizzle & Cheese for $11, and the Hatch Valley Cheesesteak at Taste of Chase for $12.

If any of this sounds a little steep, Chase Field is again offering $2 hot dogs and $4, 14-ounce beers at every Diamondbacks home game during the 2019 season. Other value items include $2 popcorn, $2 corn dogs, $5 pretzels, and 12-ounce Pepsi soft drinks for $2.

And there's more food news. Chase Field also has a brand-new artificial playing surface — called Shaw “B1K” Synthetic Grass — which will save nearly 2 million gallons of water. The Geofill® Performance Infill, or what would otherwise be dirt, is comprised of organic crushed coconut — which might be considered edible in some circles.
KEEP PHOENIX NEW TIMES FREE... Since we started Phoenix New Times, it has been defined as the free, independent voice of Phoenix, and we'd like to keep it that way. With local media under siege, it's more important than ever for us to rally support behind funding our local journalism. You can help by participating in our "I Support" program, allowing us to keep offering readers access to our incisive coverage of local news, food and culture with no paywalls.
Make a one-time donation today for as little as $1.