Federal Pizza, part of Upward Projects' Central Avenue empire, which straddles East Colter Street. David B. Moore
FIRST OF A THREE-PART SERIES: The men and women who run some of Phoenix’s most popular restaurants let their food speak for itself, but the walls of their restaurant spaces can’t actually talk, so we asked each of these entrepreneurs for the stories behind the aesthetic of their restaurants. In the first installment of this series, we chat with Lauren Bailey about Upward Projects and the tile that she lost sleep over.

Upward Projects has you figured out.

Yes, you. And your best friend. And your uncle who’s visiting from Tucson. And pretty much anyone else you can think of.

Between two states, five brands, and over 600 employees, Upward Projects has become somewhat of a micro-chain — one that manages to have something for everyone, without being bland, generic, or repetitive.
So what kind of voodoo are these guys working? 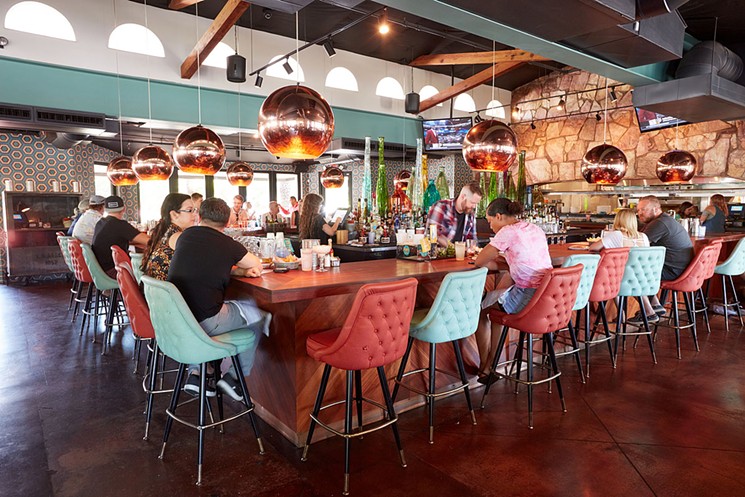 The Central Avenue Joyride in CenPho. Upward Projects also has a Joyride in Gilbert.
David B. Moore
Well, the food is good, and consistently so. Postino’s bruschetta board, which has developed a cult-like following, tastes exactly the same at the Tempe location as it does in Central Phoenix. (As it does, we assume, in Colorado.) And special promotions are smart and well-executed: Windsor and Postino offer $5 cocktails, wine, and pitchers of beer every day until 5 p.m. Taco Tuesday at Joyride Taco House (which has locations in Central Phoenix and Gilbert) has people lining up late into the evening to take advantage of $2 tacos and $5 margaritas.

But what keeps the restaurants buzzing, day in and day out, is the unique vibe that owners Craig and Kris DeMarco and Lauren and Wyatt Bailey have created in each space. And while the ambience in every Upward Projects restaurant might feel breezy and happenstance, there is thoughtful design, clever artwork, and a carefully curated playlist behind each and every one. 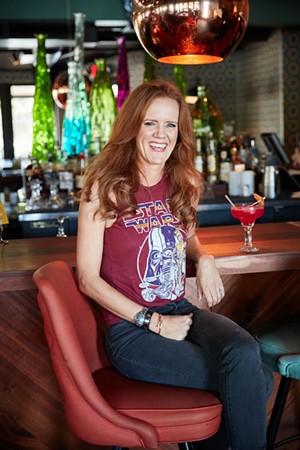 Lauren Bailey, with a frozen beverage, at Joyride.
David B. Moore
These days, Craig and Lauren are at the helm of the UP ship, manning a crew of restaurant-concept pirates that are cooler than we will ever be. Their headquarters alone is the stuff of your college dorm room dreams: desks made out of old bowling alley lanes; giant butcher-paper bucket lists taped to office doors; cold brew on tap.

This guy’s office has a chalkboard wall, that guy’s has colorful maps of Italian vineyards. A training room in the back has massive wooden obelisks on wheels filled with ideas in Expo, and floor-to-ceiling windows that look out onto Central Avenue, just south of where each of the five brands are represented in a one-block radius. And throughout the entire office are boxes filled with color samples, old album covers, and sketches of the tile that you might find in the restaurant next door.

Lauren Bailey can’t help herself. She has (self-diagnosed) “shiny object syndrome,” and something as small as a vintage postcard she found on a recent trip to San Francisco could launch her into a pinning frenzy — sticking colors, song titles, and pictures of food up on the wall of her office. Bailey graduated from ASU with a degree in art, and admits that, yes, she is absolutely a hoarder … but an organized one.

She keeps a mental catalog (and physical storage unit) of vintage pieces she finds on her travels or around town, and waits for the perfect space to put them in. Have you seen that burnt orange sectional sofa at Postino Highland? Did you ever think you could love a couch so much? And what about the marble table with gold legs that sits in front of it? Both were sourced from Modern Manor on Seventh Avenue.

Fans of Upward Projects restaurants provided hundreds of old cassettes to create this conversation wall at Windsor.
David B. Moore
“Ryan and Kylie [the owners] have amazing taste,” Bailey says. “We love the stuff they get.” Check out the “Weird is Rad” neon sign hanging above you, or look over your shoulder at the vintage lithographs on the wall, directly across from the wall of matchbooks. Each feature is eclectic, one-of-a-kind and funky, and yet … it all sort of feels like Postino.

The fact that all of the Upward Projects restaurants are in architecturally interesting buildings certainly helps to create a consistent feel among brands. Craig DeMarco was doing “adaptive reuse” before it was cool; as part of the team that founded Le Grande Orange grocery, DeMarco earned his stripes by seeing the potential in the little brick post office across the way — a 1959 building that has been Postino Arcadia since 2001. These days, when a cool space presents itself, the team at UP tries to discern what type of restaurant might suit that building (many other restaurant groups do it the other way around).

It also helps that most of the decor in each restaurant is Midcentury Modern; even in a post-Mad Men world, there is no question that furniture from the 1940s to the 1970s is timelessly cool.

The Central Avenue Joyride in CenPho. Upward Projects also has a Joyride in Gilbert.
David B. Moore
And brands with multiple locations tend to have connective tissue in their design: Take the hexagonal tile at both Joyrides, for example, that UP custom designed with Villa Lagoon tile. The rings of maroon, aquamarine, and mustard are a surprise success (and also kind of make you want a burrito and a horchata).

Goldenrod menus, signs, and beams wink at you from every Postino, which helps the brand feel cohesive, even though no one could argue that any two (of the seven) locations are the same.

And then, there is the music. It’s hard to go wrong with songs from the ’80s and ’90s, especially if that was the coming-of-age time for your target demographic. DeMarco admits he can get a little weird about the settings on the streaming music service that the restaurants use, but it’s only because he cares. Artwork tends to fall under his domain as well, and the pieces you see hanging on the walls are ones that he’s carefully curated, after finding them in Santa Fe, New Mexico, or Southeast Asia — or down the street on a First Friday. The art, too, tends to reflect the space. (A gingerbread man eating his own leg, and a toy car chase at Churn, which sells both ice cream and nostalgic toys, are maybe the most on-the-nose pieces.)

With all the success of the micro-chain (they would hate to be called that, no doubt), Upward Projects could easily outsource their design. Instead, Bailey and DeMarco use their savvy team, their international travels, and their own gifted senses to inspire their aesthetic, and about the purpose behind design they are in lockstep: The intention is to create space for human connections.

“None of this works if it is not authentic,” Bailey says. Most of their restaurants are surrounded by residential neighborhoods, and being an asset to the community around them is paramount to their mission.

Churn is Upward Projects' ice cream parlor.
David B. Moore
In what would become a signature move for Upward Projects, the team reached out to its loyal following just prior to opening Windsor, and made a plea for patrons’ old cassette tapes. With the (hundreds) they received, they were able to create a wall in the restaurant that is now the backdrop for countless Instagram posts, not to mention a catalyst for walks down memory lane and waiting-for-the-bathroom conversations.

They have since implemented “group projects” in several other locations; many that have some sort of nod to the building’s origins.

The Postino Annex in Tempe, formerly an ASU art building, has a wall of Polaroid photographs, soon to be a wall of pencils. A building in Denver that once held a book-binder is the home of the only out-of-state Postino, and one wall is made entirely of hardcover books. In each case, neighborhood residents were asked ahead of opening if they could donate to the project, thereby adding their proverbial stone to the mountain.

Sort of makes you wonder what they will come up with next. And maybe, how you can be a part of it.

For each of the restaurateurs featured in this series, the first step in a new project is the same: Look at a space, and ask what it needs. On Thursday, we ask Joe Johnston and Craig DeMarco about the unusual buildings they chose for their Gilbert restaurants.