"The international and local community helped propel us forward through a crazy set of hurdles," Pryzbl says, referring to the past few dramatic months for the locally renowned bakery.

During the last three years, the couple had been allowed to operate the bakery from their garage under Arizona's Cottage Food Program. But last month, Przybyl and Abou-Eid received a notice from the city of Mesa about relocating Proof's operations from the couple's home to a commercial site sooner than they were expecting.

It all started in August when Przybyl learned a disgruntled neighbor was calling the city daily about cars parked in front of their house. Przybyl tried to remedy the situation by building a parking pad. "We planted trees and arranged for carpooling for our crews so that there were never any cars on the street," he says.

Those efforts didn't quite work.

Also in August, the vice mayor of Mesa and a code compliance associate visited Proof Bread and the premises to determine a resolution. Proof was given an allotted amount of time to shift to a commercial space.

"It turns out the city of Mesa representatives were eager to provide a solution that would work for a viable transition," Pryzbal says. "They assured us we would have all the time we needed."

Pryzbal estimated that time was 18 months. "It's expensive to move a bakery," he says, and "it's a huge risk in the middle of the pandemic." Plus, having the additional time came as a relief for the couple, who recently found out their youngest daughter has Friedreich's ataxia, a genetic illness.

But the breathing room was short-lived.

Last month, Pryzbl was notified that the original timeline to move to a commercial property had been pushed up to January 15, 2021, cutting 18 months to about five. "I spent a day in despair, then realized that I can't just stay there," he says. "We need to move forward. I fast-forwarded all of our original dreams." 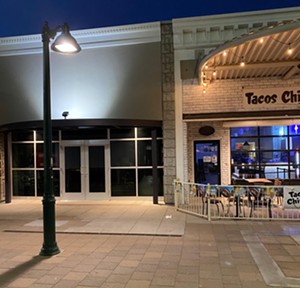 The new location will be located in Downtown Mesa.
Proof Bread
He decided to take a drive to downtown Mesa and luckily found a spot they could transform into a bakery. "We spent 10 days vetting this building, which actually has an old boarded-up roll door in the back, which is perfect for farmers' market distribution," he says.

The storefront is on Main Street, neighboring the new location of Tacos Chiwas. Then, the couple learned it will cost $250,000 to transform this space into a production bakery with a retail component.

But Pryzbal is focused on the positive. "We have a very large following," he says. "We have a lot of people that are interested in what we're doing." He's not wrong.

Pryzbal and Abou-Eid have continued building a fanbase since they bought Proof Bread from former owner Jared Allen in 2017. Today, Proof Bread 2.0 sells at five Valley farmers' markets and has more than 21,000 Instagram followers and 70,000 YouTube subscribers.

The couple put up a GoFundMe page to help with the costs of relocating. As of this reporting, donations have reached roughly $64,000.

Pryzbal says that although people from around the world have donated, local support has been integral. "At least four of the City Council members were getting dozens and dozens of emails supporting our business," he says.

Now the plan is to open the public space in February 2021 — which Pryzbal is looking forward to.

"I am excited to move into our new place and return to what I love," he says, "making bread and pastry."
KEEP PHOENIX NEW TIMES FREE... Since we started Phoenix New Times, it has been defined as the free, independent voice of Phoenix, and we'd like to keep it that way. With local media under siege, it's more important than ever for us to rally support behind funding our local journalism. You can help by participating in our "I Support" program, allowing us to keep offering readers access to our incisive coverage of local news, food and culture with no paywalls.
Make a one-time donation today for as little as $1.