Shannon Moss is co-owner of The Garfield Phoenix with her husband, Oswald Fuentes. Kevin Burton

A vintage Valentine diner in downtown Phoenix’s Roosevelt Row neighborhood has a new tenant – and a fresh look. Offering Sonoran tacos, burritos, coffee, and ice cream for lunch and dinner, The Garfield Phoenix is currently open three days a week – Thursday through Saturday – at the diner, 924 East Roosevelt Street.

The Garfield Phoenix is owned and operated by husband-and-wife team Oswald "Ozzie" Fuentes and Shannon Moss, who rented the property in June and have been making renovations throughout the summer and into the fall, opening for business in early November. Markedly absent is the classic red and white look that the diner had for many years.

“My vision esthetically was that I wanted to preserve some of the historic attributes of the place,” says Moss, who replaced the vibrant red color with a more subdued green tone that blended in with the trees that provide shade to the diner and its outdoor dining space. “I knew that we could really revitalize this and bring it back to life.”

The location was most notably the previous home of Welcome Diner until 2018 when the restaurant announced it was closing and moving a few blocks away to its current location at 929 East Pierce Street. The diner has sat vacant for the past couple of years, Moss says.

The vintage eatery on Roosevelt Row has a new look, and more improvements on the way, like signage.
Kevin Burton

The couple is combining their two successful ventures under one roof, Moss says. Fuentes has been grilling tacos, burritos, and tamales for years at food pop-ups with his Viva Cabron cart while Moss has been developing her Shanny’s Frozen Bananas and Bakeshop business. At the diner, patrons can order ice cream, drinks, and coffee at the service window while Fuentes operates the build-it-yourself grill outside.

“Right now, we’re focused on lunch and dinner,” Moss says. “Yes, it’s only three days, but we wanted to do those consistently without stretching ourselves too thin. Eventually, when things change, we hope to be open six days a week.”

When it comes to the menu, Moss says the goal is to keep it simple and focus on quality, not quantity.

“We don’t have some huge menu,” she says. “For instance, the meat, that’s the star of the show, for tacos and carne asada. [Ozzie] uses flank steak; he doesn’t use the cheap-o kind of meat that a lot of the restaurants are using. And he also uses a lot of ingredients, like a full variety of toppings that you can’t get anywhere else – like real guac, different kinds of salsas, beans, vegetables, and all that sort of thing. So, it’s really build-your-own.” 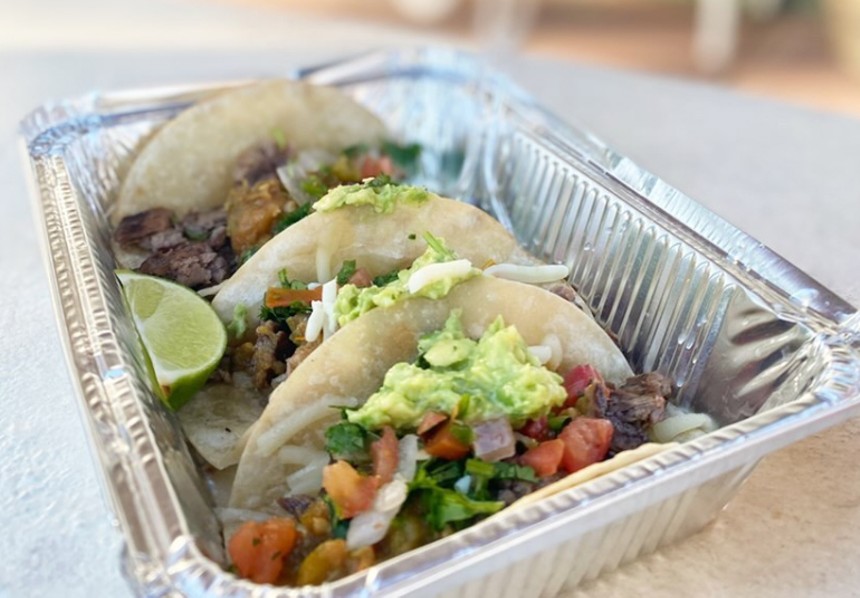 For sweets, The Garfield Phoenix has private label artisan ice cream that is locally sourced. Moss says they always carry “the standards” – vanilla bean, chocolate, chocolate chip, and so forth – but also have fun seasonal flavors to mix things up a bit. At the service window, you can get house-made horchata, cold brew coffee and artisan ice cream with a selection of toppings and cones like sprinkles, Fruity Pebbles, or Oreos. You can even add a scoop of ice cream to coffee or Mexican soda to make a float.

Moss says the plan is to eventually add a few sorbets that are vegan and non-dairy. On the grill, vegan options include a variety of beans, veggies, and corn tortillas.

A liquor license is pending, she says, and the plan is to offer a full bar in addition to food.

“We see ourselves more as a restaurant, and the alcohol is just an extra bonus to that,” she says, adding that The Garfield Phoenix may stay open later – like 12 or 1 a.m. – in the future.

“I will say that we are exploring options with expanding our menu,” she says, including breakfast service.

The couple is looking to fill some staffing needs and will continue to improve the outdoor dining space and overall vibe with lighting and additional landscaping.

“We’re still not done, I mean, it’s a work in progress,” she says. “We’ve done most of this work ourselves. It has been a labor of love, but it’s so worth it.”

The nine-seat Valentine diner has been a Roosevelt Row landmark since the diner was placed there in the 1980s. The prefabricated diner was the brainchild of Arthur Valentine, whose Valentine Manufacturing Company built and sold numerous models from the late 1940s until the early '70s. The diners came with an indoor lunch counter, service window and full kitchen, and were a hit along popular highways like Route 66. Some are still operational to this day.

The Garfield Phoenix
924 East Roosevelt Street
Thursday 11 a.m. to 8 p.m.; Friday 11 a.m. to 10 p.m.; and Saturday 6 to 10 p.m.
(Check Google for current hours of operation.)
KEEP PHOENIX NEW TIMES FREE... Since we started Phoenix New Times, it has been defined as the free, independent voice of Phoenix, and we'd like to keep it that way. With local media under siege, it's more important than ever for us to rally support behind funding our local journalism. You can help by participating in our "I Support" program, allowing us to keep offering readers access to our incisive coverage of local news, food and culture with no paywalls.
Make a one-time donation today for as little as $1.