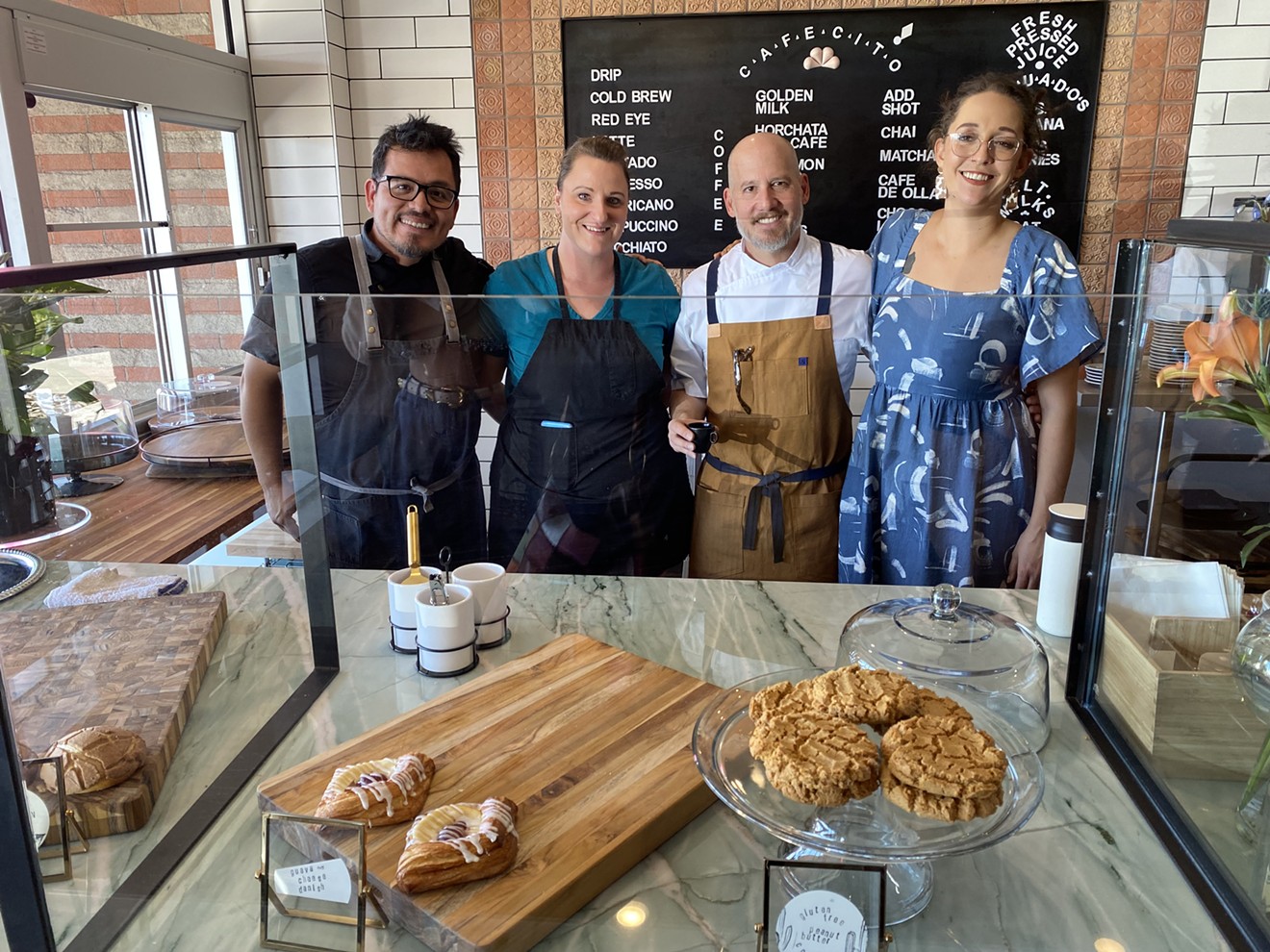 To create space for Otro Cafecito, Robson opened up a wall from Otro Cafe to the narrow adjacent storefront that housed Phoenix Flower Shop. The new cafe includes a coffee bar with a walk-up window, scratch-made sweet and savory pastries, and freshly pressed juices. Eventually, it'll feature a full bar with unusual craft cocktails and maybe small bites, Robson says. Everything is inspired by Mexican ingredients, flavors, and traditions.

A soft opening starts Tuesday, November 22, with coffee and pastries only. An official opening is set for the week after Thanksgiving.

“Once we find our rhythm, we’re going to start branching out and developing more offerings on this side,” Robson says. The cozy and welcoming Otro Cafecito space has a capacity of 24.
Geri Koeppel
Robson recalls that the idea came about when the landlord approached him and asked if he was interested.

“At first I thought I could expand the kitchen,” he says, “because our kitchen [at Otro Cafe] is a little tight.”

But taking over only part of the neighboring shop wouldn’t have left much room for any other business to go in, so Robson decided to rent the entire 1,500-square-foot space. Instead of simply expanding the kitchen and adding more seating, Robson began to consider other uses. He consulted with staff, and they developed the idea for Otro Cafecito.

The first thing they identified was that there’s nowhere to wait when Otro Cafe is busy on weekends, particularly during brunch.

“So a coffee shop made sense,” Robson says. “It’ll give our overflow a chance to get a cup of coffee and pastry while they wait for a table.”

Also, the team felt there weren’t enough non-corporate coffee shops nearby to serve the community. And, “we felt we had a perspective on coffee that’s unique with the Mexican influence,” Robson says. A gleaming pastry case at the front holds tempting wares made in-house by Amanda Hepler, who’s been tinkering with recipes for traditional Mexican pan dulce like conchas, shell-shaped pastries with a scored topping, and orejas, a cinnamon-dusted puff pastry shaped liked two ears, along with danishes, savory empanadas, and more. They average around $4 each.

Hepler is particularly happy with her orange espresso morning buns made from croissant dough with brown sugar, orange zest, and ground espresso. She says they’ve been a “sleeper hit” among the staff. The orange espresso morning buns have been a "sleeper hit."
Geri Koeppel
“My aim is to make something people will come back for,” Hepler said.

Coffees are supplied by female-owned roastery Esso Coffee, located a couple of miles away on North 12th Street, because Robson likes their darker roast that imparts caramel and chocolate notes. “We like our coffee strong,” he says.

In addition to the typical menu of espressos and lattes, the coffees also have a Mexican take. Otro Cafe partner Carlos Diaz created a play on cafe de olla, which is brewed coffee steeped with piloncillo and cinnamon and served in a traditional clay pot. Here, it’s been adapted to use espresso and hot water, like an Americano, but with a piloncillo-and-cinnamon-infused syrup.

“It tastes just like a cafe de olla” Robson says.

Otro Cafecito will also feature licuados (about $7), or freshly pressed vegetable-based juices, which are near and dear to Robson. Otro Cafecito owner Doug Robson pours a licuado, or freshly pressed juice, made from beet, carrot, and lime juice with turmeric.
Geri Koeppel
“We used to do juices at the original Gallo Blanco,” Robson says. “It’s a very Mexican thing to have. So we said, ‘You know what, let’s stay true to the culture with the licuados.’”

Blends will change from day to day, but might include green apples, kale, celery, and parsley, or carrot and orange juices with ginger, lemon, and a splash of lime.

When the bar fully opens, cocktail enthusiasts will be in for a treat. Stephanie Thomson, Otro Cafe’s beverage director, developed a line of intriguing Mexican-inspired libations (about $13) that differ from those next door. They include mushroom-infused mezcal with honey, tomatillo, and lime, and a twist on a carajillo, a Spanish-style espresso martini, with rum, espresso, and orange cardamom syrup.

Beaming like a new dad at a pre-opening event for Otro Cafecito, Robson was excited about showcasing his staff’s contributions and his love of Mexican cuisine and culture.

“Creatively, it’s kind of nice to be able to expand on things and stretch new muscles,” he says.

6035 North Seventh Street
602-266-0831
KEEP PHOENIX NEW TIMES FREE... Since we started Phoenix New Times, it has been defined as the free, independent voice of Phoenix, and we'd like to keep it that way. With local media under siege, it's more important than ever for us to rally support behind funding our local journalism. You can help by participating in our "I Support" program, allowing us to keep offering readers access to our incisive coverage of local news, food and culture with no paywalls.
Make a one-time donation today for as little as $1.
Geri Koeppel is a professional writer, voracious reader, devoted traveler, and an amateur cook, wine drinker, birder and tennis player. She's lived and worked in Detroit, San Francisco, and Phoenix.
Contact: Geri Koeppel