Proof's Ukraine morning buns. Proof Bread
In the wake of the Russian attack on Ukraine, the city of Phoenix has shown its solidarity in different ways. Phoenix City Hall, for example, lit up in yellow and blue lights in a nod to the Ukrainian flag, as did Tovrea Castle (the wedding cake house). Here is how some Valley restaurants and bakeries are showing their support:

Proof Bread
Proof Bread owner Jonathan Przybyl started a fundraiser for his friend, Anna Makievska, the owner of Bakehouse sourdough bakery in Kyiv. Bakehouse is currently feeding people regardless of their ability to pay, and Przybyl is donating money to help keep the bakery open. In addition to his fundraiser, which has so far raised $124,460 of the $500,000 goal since March 7, he has baked a croissant cinnamon roll (morning buns) with yellow and blue icing. In an Instagram post, he wrote: “When you eat them, be considering your next step to help our global situation.” In an update to his fundraiser page on March 24, Przybyl added: “To date, we have raised enough funds for this team to produce 83,000 Batons for donation, or roughly 100 days of production. This will equate to over 1.2 million meals for the hungry in Kyiv.”

All Pierogi, a Ukrainian restaurant and market in Mesa, is taking donations to support Ukraine. Owner Natalia Koshalko invites people to try the food and make donations. “We take cash donations and give it to people who have relatives in Ukraine,” says Koshalko. “This way, we know where the money goes. They use it for medicines, clothes, food — whatever they need.”

Little Spring Provisions (by Pig & the Peanut)
As part of the hashtag #bakersagainstracism, Caila Byrd and her partner, Patrick Phillip, have added a fluffy fried vegan treat to their repertoire. The glazes rotate, but they are mostly made with The Shop Beer Co.’s Neonic Sour Beer (e.g., Orange Julius glaze). “We’ve also offered prickly pear glazed doughnuts and plan to keep having fun with it and changing it up,” says Byrd. Little Spring Provisions will donate all proceeds from the doughnuts to World Central Kitchen and Sunflower of Peace. World Central Kitchen is a nonprofit organization founded by Chef José Andrés in 2010 that provides meals to people affected by humanitarian crises or natural disasters. Sunflower of Peace is a nonprofit currently providing medical and humanitarian aid to Ukraine. Find Little Spring Provisions at the Downtown Phoenix Farmers' Market on Saturday, April 2; get more information on their whereabouts at the website. 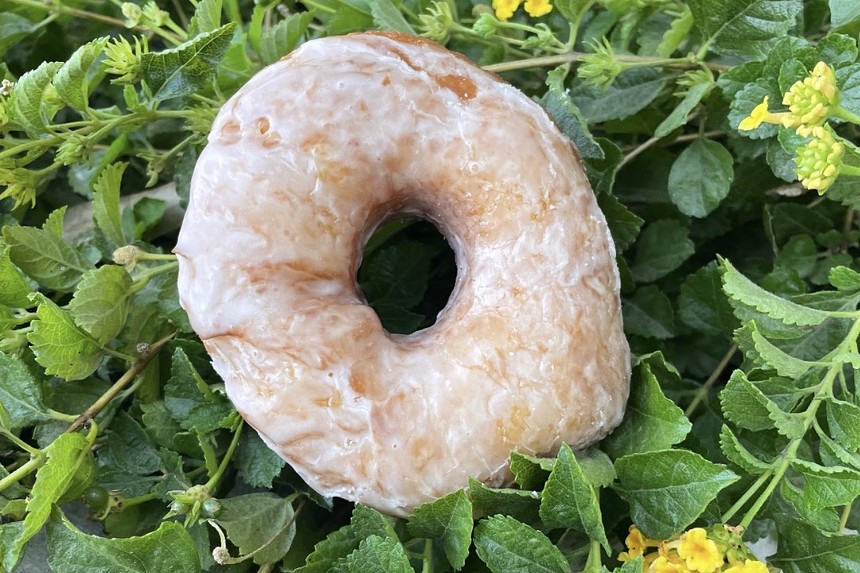 The Neonic Orange Julius doughnut from Little Spring Provisions.
Little Spring Provisions (by Pig & the Peanut)
The Osio Culinary Group, which owns SumoMaya and Local Bistro, has removed all Russian products (vodka and caviar) from its restaurants and replaced them with Ukrainian products. In addition, customers are invited to donate money to the Save the Children's Ukraine Crisis Relief Fund. Both restaurants include a link on their Instagram sites; donations will be matched up to $5,000 per restaurant, for a total of $10,000.

Sal’s Pizza in Gilbert started a donation campaign on March 22. Through April 5, Sal’s will donate $1 for every whole pizza purchased to the Ukrainian Red Cross. Sal will match donations dollar for dollar.

Snooze, An A.M. EATERY ran a program called Pancakes for Peace between March 17 and March 23, during which 100 percent of sales from the restaurant's pancake of the week (chocolate-covered pretzel pancake) was donated to World Central Kitchen. Snooze public relations executive Callie Sumlin reports that “Snooze’s total donation to World Central Kitchen was $25,000.” Arizona branches (eight of a total 46 nationwide) contributed $3,750.

In early March, Aunt Chilada’s restaurants held a fundraiser for one of its previous employees, Luby Miller, who worked there for 15 years and has family in Ukraine. Luby has moved to northern Iowa, but the owners considered her part of the family. The party included a life-size piñata of Russian President Vladimir Putin for donors to whack. The money went to Miller’s family's village.

Through March 31, Roxx Vodka will donate $1 for every bottle sold to Polish charities that support Ukraine. Locally owned Roxx is produced in Poland with naturally grown grains and is corn-, sugar-, and pesticide-free. You can find Roxx Vodka at A.J.'s Fine Foods and other Phoenix-area locations.

Sadly, at the same time that the city is rallying to show support for Ukraine, a number of Russian grocery store and restaurant workers have faced anti-Russian sentiments in person and on social media.

The actions of a government do not define its people, especially those who left their country.
KEEP PHOENIX NEW TIMES FREE... Since we started Phoenix New Times, it has been defined as the free, independent voice of Phoenix, and we'd like to keep it that way. With local media under siege, it's more important than ever for us to rally support behind funding our local journalism. You can help by participating in our "I Support" program, allowing us to keep offering readers access to our incisive coverage of local news, food and culture with no paywalls.
Make a one-time donation today for as little as $1.