"Owl Pancakes" by Sandra Marshall, who uses every part of a plant in her art, from peels to seeds and stems. Courtesy Jameson & Associates

For food artist Sandra Marshall, all it took to achieve six million views on social media earlier this year was a simple potato tuber dressed in kale with eggplant mittens, made to resemble Senator Bernie Sanders at the Presidential inauguration. (A retweet from author Stephen King didn't hurt, either.)

Marshall, who's based in Phoenix, uses exclusively plant-based foods in her art, creating fruit-and-vegetable effigies of the likes of Sanders, Donald Trump, Johnny Depp, and other familiar faces, plus portraits of pandas, owls, and other wildlife. (You can find her work here.) Before food became her primary medium, Marshall taught painting in Italy and operated the Phoenix art studio and school Be… An Artist, which she closed in 2019 to focus on her food art career (she still teaches classes online).

We recently caught up with Sanders to talk about why she went plant-based, her two food art books, and more.

What was the first plant-based food art dish you made?
My first plant-based dish was “Owl Soup.” My parents dropped off a pile of vegetables at my house before they left on a vacation because they would go bad by the time they got home. They were on the table and my 3-year-old son said, “Yuck! I am not eating those!” and about a week before that, my daughter who was five years old declared she would never eat meat again – as if cooking isn't hard enough! I sat there staring at the giant pile of colorful vegetables sitting in the light coming from the window, and they looked like a beautiful owl to me. I moved some things around and this is when the fun began. The owl was adorable and my kids were intrigued. I made up a cute story and told them we were having “Owl Soup” for dinner. They ate ALL of the soup and I thought to myself, Hmmmmm. You are onto something!' I never stopped. Now it has been 12 years making these. "Bernie in Eggplant, Potato, and Kale" (aka "Taste the Bern") by Sandra Marshall
Courtesy Jameson & Associates

What's the best-tasting food art you've made? Bernie Sanders in eggplant, potato, and kale looks pretty delicious.
I have to say, potato kale soup is one of my favorite soups. When the Bernie meme with his mittens came out, I had to make him! I looked in my fridge and I found the cutest little potato and I thought to myself, Here we go! I’ll make Bernie. I added cauliflower, kale, and eggplant and there he was. After I made him, I cut up all my veggies, added white beans and some other ingredients, and Bernie Soup was a real hit with my family.

What’s the most unusual or exotic food you’ve used in your art?
My good friends took me to an Asian market. They are from Malaysia. They were excited to open a whole new door to my art. They had fruits and vegetables there I never dreamed of at this market! They held my arm walking around the store asking what I could possibly see. I grabbed a bunch of vegetables and I told them, “I see a beautiful, sexy reclining lady!” They looked at each other with big smiles and started laughing. I made the lady and they made the dinner using what we bought. The sexy woman ended up being the cover of my punny book of food art and stories for adults, One Hot Night at the Veggie Bar, which came out in 2016. How does the food art in your first book for adults differ from the food art in your second book for children?
My first book, One Hot Night At the Veggie Bar, is full of punny short stories that go along with each art piece. Some are hot and steamy and some are just fun and cute. There was one time when my husband was working late. I was making him some potato lentil soup when he arrived home. It was dark in the kitchen and when he walked in, there was a naked lady made out of potatoes and lentils in a pot boiling like she was sitting in a jacuzzi relaxing. His expression was priceless! This image is in my adult book with a steamy story to go along. I started posting the stories and art on Facebook and everyone was asking when the book was coming out for their kitchens. The adult came out first because that is what my publisher wanted. I was very excited to be published. I had friends who would tell me it was their child’s favorite book and I would cringe. There were naked potatoes and weird stories in there!

I had to get out my children’s book next and it is finally here. It took me four years to create this children’s book and it was worth it. Every part of The Razzle Berry Wackadoodle Garden is made from layers and layers of healthy fruits and vegetables. There are cute animals all throughout this book. Pigs made from watermelon, poodles made from cauliflower, adorable sloths made from kiwi fruit – and that is just the beginning. Throughout the pages, the sunsets are a close up of a peach skin and broccoli trees are really a thing! When you open the book all the fruits and vegetables are listed, then the story and all the food art to go along. At the end it breaks down what all the art was made of. Everything is listed and the kids get so excited about it. 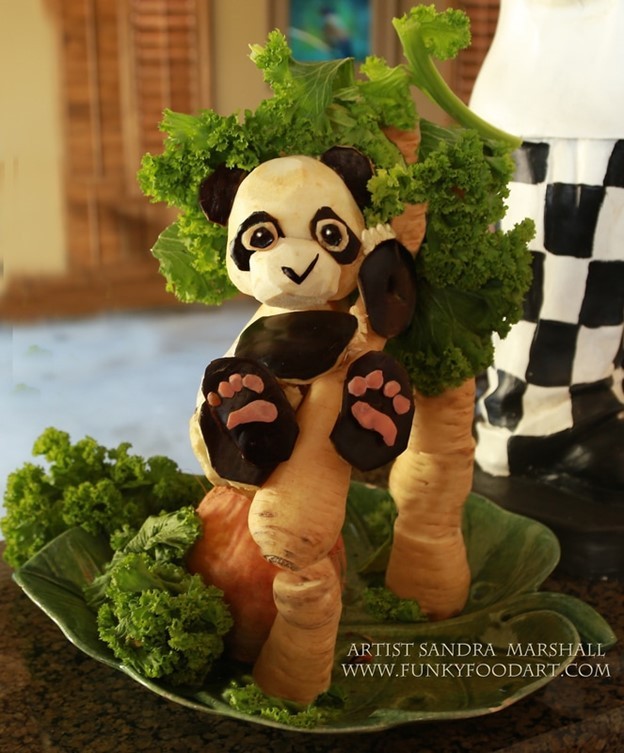 "Hang on for the Ride" by Sandra Marshall
Courtesy Jameson & Associates
KEEP PHOENIX NEW TIMES FREE... Since we started Phoenix New Times, it has been defined as the free, independent voice of Phoenix, and we'd like to keep it that way. With local media under siege, it's more important than ever for us to rally support behind funding our local journalism. You can help by participating in our "I Support" program, allowing us to keep offering readers access to our incisive coverage of local news, food and culture with no paywalls.
Make a one-time donation today for as little as $1.