Jeffrey Menzer, The Mick's official "cork dork," emcees the Somm Brawl events. Claudia Johnstone
Many savvy restaurant-goers are familiar with a wine pairing dinner, where someone — usually a sommelier or winemaker — pours guests a carefully selected sip to match with each course served. It’s designed to elevate the experience from a mere meal-and-a-beverage to a party on the palate that’s greater than the sum of its parts.

But what happens when a customer is presented with not one, but two glasses of wine, and asked to choose which is the better option?

That’s the idea behind the knock-down, no-holds-barred Somm Brawl. The Mick Brasserie in Scottsdale started hosting the event in January 2022, pitting eight of the Valley’s most sophisticated wine professionals against each other in multi-week brackets similar to a boxing match.

The second Somm Brawl series starts again soon, and runs Monday evenings from January 9 to 30, with semifinals on February 20 and 27, and finals on March 13. The cost is $142 for the first four dinners, $169 for the semifinals, and $199 for the finals; tax and tip are extra. 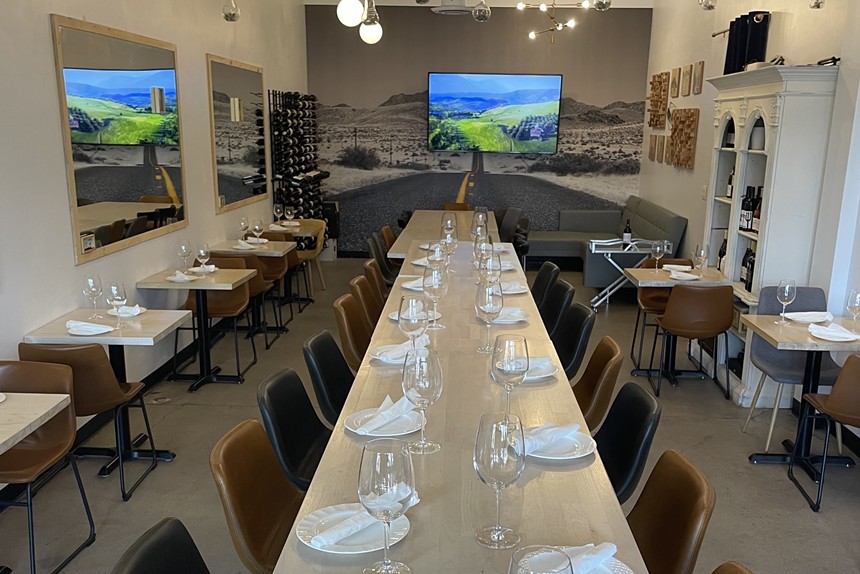 In early 2022, The Mick's Somm Brawl events started selling out the entire restaurant.
The Mick Brasserie
All feature four-course dinners with two pairings picked by wine professionals from top Valley restaurants, resorts, and distributors. This year's competitors are Katherine Janowiak of Southern Glazer's Wine and Spirits vs. Wesam Kawa of Du Coeur Restaurant on January 9, Sarah Byrne of Breakthru Beverage Group vs. Laura Bruno of Elements on January 16, Samantha Fank of Quench Fine Wines vs. Daniel Webber of Maple & Ash on January 23, and Troy Tranzow of Prime, A Shula's Steak House vs. Jason Caballero of Wrigley Mansion on January 30.

They’re given the menu and a budget in advance, and they’re allowed to talk to chef Brent Menke about his vision behind each dish. Then the moment of truth arrives.

“We treat the actual event like a boxing match,” says Jeffrey Menzer, The Mick’s official “cork dork” who serves as master of ceremonies and helped develop the dinners. “We start it off with [the song] ‘Eye of the Tiger.’” 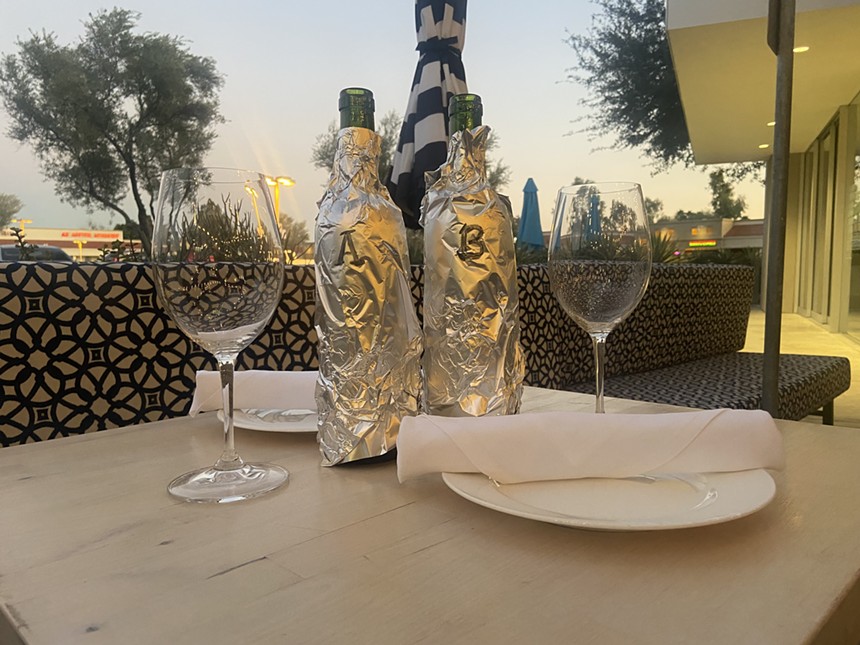 Wine bottles at the Somm Brawl are wrapped in foil to obscure the labels.
The Mick Brasserie
Then, the sommeliers emerge and present a brief bio of themselves and how they got into wine. Wines are served out of bottles wrapped in foil, so no one knows which is which — not even the servers or sommeliers, and guests are given a piece of paper to mark which they liked best with each course. After the wines are revealed, the sommeliers talk about why they chose each specific wine.

The competition creates excitement among the diners, who discuss the wines, ask questions of the sommeliers, and often disagree, according to Nichole Palmer of Chandler, one of the attendees last year. She warns others to be prepared to drink.

“I would definitely Uber," she says. "Lots of wine gets poured." Drew Cameron, now a server at Cafe Monarch and Reserve, won the first Somm Brawl in early 2022 by pairing a syrah from Rune Winery in Sonoita with lamb.
The Mick Brasserie
The French colonial cuisine at The Mick is another draw. Chef Menke uses marination, slow roasting, and sous vide techniques to create the courses, finishing everything in high-temperature ovens.

“The wine and food pairings were next level — better than anything I’ve seen in the Valley,” Palmer says.

Menzer initially came up with the concept for Somm Brawl while talking with The Mick's owners, Menke and John Krause, along with Drew Cameron, who’s now a server at Cafe Monarch and Reserve

“We billed it as an industry night, but word of mouth just took it, and social media just ran with it,” Menzer says. “We had influencers for each of the events last year. We had a live feed on Instagram for it, and people were watching it.” Daniel Reza, left, was knocked out of the first Somm Brawl's final match in February 2022 by his best friend, Drew Cameron.
The Mick Brasserie
Cameron ended up winning last year's contest on his birthday, February 28, beating his best friend, Daniel Reza, the sommelier at Scottsdale National Golf Club. He secured the top spot by pairing a syrah from Rune Winery in Sonoita with Menke's lamb chops with bordelaise and sweet pea puree.

“It basically beat out a Chateauneuf-du-Pape,” a red blend from the Rhone in France that’s often highly acclaimed, Menzer says.

The winner receives a boxing belt, but Cameron got something else out of the experience. At the time, he was working full-time in the mortgage industry, but the combination of rising interest rates and slumping demand plus the victory spurred him to re-enter the hospitality business.

Landing the title “pulled at my heartstrings a little bit,” Cameron says. “I made me realize I missed the industry and wanted to go back.” Now, he’s studying to take the advanced sommelier exam this April. The Mick often adds bottles chosen by outside sommeliers to its extensive wine list.
The Mick Brasserie
The competing sommeliers can choose virtually any wine they want, and The Mick will order it so guests can buy bottles to take home if they like. Any extras are sold until they run out, but sometimes Menzer adds them to the restaurant’s wine list.

“I get introduced to wines maybe I would not get introduced to because my colleagues have chosen it for the competition,” he says, explaining that it makes his job easier. “These are recognized wines by top sommeliers; why wouldn’t I want to put them on my list?”

Reservations are available on OpenTable, and Menzer suggests making them early, because now that the word is out, they fill up.

“Last year it started off where there were 20, 30 people for the first few events,” he says. “By the time we got to the finals, we sold out the entire restaurant with 125 people.”

Somm Brawl at The Mick Brasserie

9719 North Hayden Road, Scottsdale
480-210-5500
themickaz.com
KEEP PHOENIX NEW TIMES FREE... Since we started Phoenix New Times, it has been defined as the free, independent voice of Phoenix, and we'd like to keep it that way. With local media under siege, it's more important than ever for us to rally support behind funding our local journalism. You can help by participating in our "I Support" program, allowing us to keep offering readers access to our incisive coverage of local news, food and culture with no paywalls.
Make a one-time donation today for as little as $1.
Geri Koeppel is a professional writer, voracious reader, devoted traveler, and an amateur cook, wine drinker, birder and tennis player. She's lived and worked in Detroit, San Francisco, and Phoenix.
Contact: Geri Koeppel