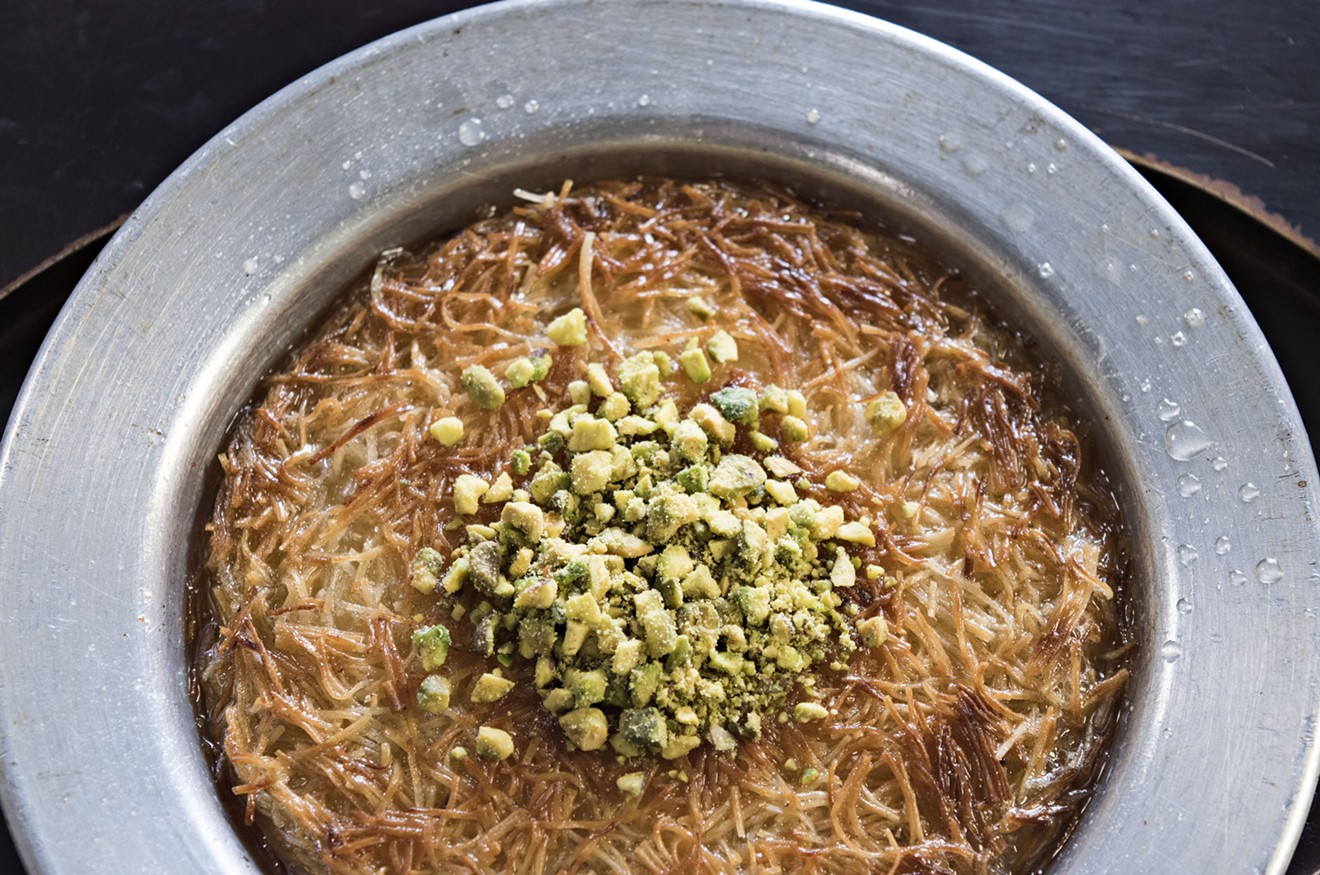 TurkDish's kunefe. Jackie Mercandetti
One of the most satisfying desserts I’ve encountered recently is the kunefe made at TurkDish, a small family-run restaurant tucked deep into the folds of a Chandler shopping center.

There are many fine renditions of kunefe (or knafeh, one of many regional spelling variants) made around metro Phoenix. But the baked-to-order kunefe at TurkDish is notably great. It’s the kind of photogenic dessert you eat with your eyes first: Its glossy, syrupy crust, coated in thread-like phyllo dough, resembles something like a bright orange bird’s nest. You plunge your spoon into its crust, generously varnished with syrup, and spoon out the sticky, sweet-savory clot of melted cheese lurking beneath. The stretchy cheese, so hot and soft it’s almost liquid, melts right into your jaw. It’s really something.

Kunefe seems best enjoyed with something hot to drink, and the natural choice here is Turkish tea. But whether you order dessert or not, a meal at TurkDish inevitably ends in traditional fashion: with tea. The dark, slightly bitter liquid is poured into short, tulip-shaped glasses, and whisked to your table at the end of your meal as a complimentary token of hospitality.

Fresh-baked kunefe with tea is one of the distinct pleasures of dining at TurkDish, but it’s not the only one. Since opening in early 2015, the restaurant has quietly amassed a neighborhood following, thanks to a satisfying menu of traditional Turkish specialties, including popular staples like döner kebab.

The small restaurant itself is bland yet comfortable, outfitted in standard strip-mall four-top tables and booths. Any discernible ambiance is derived from the dining room’s sparsely decorated walls, which feature kilim rugs and framed landscape art of Istanbul. Service is informal yet also attentive, which elevates TurkDish from a quick-and-dirty takeout joint to the kind of space you don’t mind spending time in.

TurkDish's exterior
Jackie Mercandetti
This is an especially good place to come with a group — the more mouths around the table, the more excuses you have to linger over the top-notch selection of meze starters.

There’s an appetizer sampler plate, a safe bet for larger groups, which includes staples likes hummus, fresh pita bread, sarma (rice-stuffed grape leaves), and baba ganoush. All of it is terrific, but the baba ganoush — rich, smoky, and creamy — is exceptional.

Sigara borek, long, cigarillo-shaped pastries stuffed with cheese and parsley, are so crisp and delectable, you may as well order a whole plate of them. And there’s ezme, a chunky and spicy relish-like salad made with roasted eggplant and peppers. The flavors are bold and bright, a nice counterpoint to the creamy and meat-laden dishes you are likely to come across during your meal.

It’s worth looking at the small salad menu, if only for fattoush. The brightly colored bread salad is markedly fresh and full of texture, thanks to extra-crispy shards of toasted pita, tossed with fresh hunks of cucumber, tomato, and red cabbage. The fattoush is dressed simply with olive oil and lemon, and a dash of tangy sumac spice.

Don’t overlook the lahmacun, a dish sometimes described as “Turkish pizza.” The thin, round flatbread features a baked-in layer of spicy minced beef paste, beautifully seasoned with tomatoes, onions, and parsley. The texture of the flatbread is gorgeous — thin, slightly chewy, elegantly crisp. To eat it like you would in Istanbul, squeeze some lemon on it, roll it up into a thin flute, and enjoy.

Scratch-made falafel, meanwhile, are available as both a starter or an entree, and they’re some of the best you’ll find anywhere in town. The falafel is cleanly fried, nicely craggy and crisp, suffused beautifully with fresh herbs. 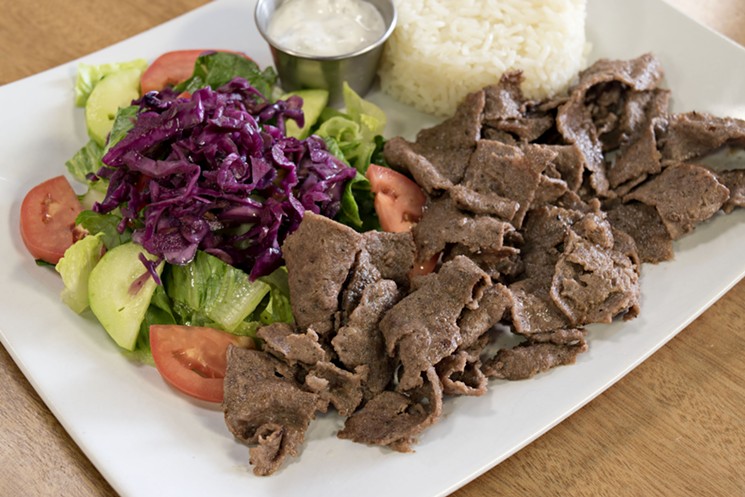 Döner comes in beef and lamb varieties.
Jackie Mercandetti
But you came for the döner. Often described as the Turkish analog to gyro, both beef and lamb varieties at TurkDish are made in-house. The slow-roasted meat is highly seasoned and sliced into thin, delectable scraps. The beef döner, on a recent visit, was so tender and slippery, you could fold it right into your mouth.

Other highlights include Adana-style kebabs, named and modeled after the famously spicy kebabs of Turkey’s fifth-largest city. On a recent visit, the juicy, sausage-like kebab was beautifully grilled and served off the skewer, a sort of long, thin, densely seasoned tendril of meat.

Apart from dessert, the most indulgent thing I’ve ever eaten at TurkDish is Iskender kebab. The butter-perfumed dish involves meaty döner slivers, served over cubed pita bread and bathed in a butter-infused tomato sauce. Plain yogurt, whisked lightly and poured on the side, melts into the dish, turning the sauce into a light cream. It’s wonderful.

At TurkDish, even a humble side of white rice is capable of inspiring joy. Twice, on separate occasions, I’ve overheard a diner inquiring about the rice. Why does it taste so good? I heard a woman ask her server recently. The short answer, according to my server: butter, lots of it. It makes for extra-fluffy rice that delivers a surprising amount of savory flavor.

Turkish tea and baklava.
Jackie Mercandetti
At one time, TurkDish was known for selling fresh-baked goods on Saturdays. The restaurant no longer keeps baked goods in stock, unfortunately, but you can still place orders ahead of time. On the bakery menu is simit, a round pastry known as a Turkish bagel, and börek, a spinach and cheese phyllo pastry that’s especially popular around the holidays.

Always available, though, is the aforementioned kunefe, an indulgence that’s well worth a trip to TurkDish, along with a delicious and readily available walnut-stuffed baklava. And, of course, there’s always hot Turkish tea.