Peach Cobbler, a recent entry in Wren House's newly launched Las Frescas Chris Malloy
Wren House Brewing has emerged as one of the best breweries in metro Phoenix, young or old. The 24th Street taproom seems to wipe the stresses from life, leaving you in a space that has a residential vibe, like a cool friend’s lake house where people bullshit and share pictures and drink good beer.

The bonhomie flows with the hefeweizen and hazy IPA.

The space and system, though, are somewhat limited. And even with these limitations, head brewer Preston Thoeny is able to innovate, to summon eye-opening suds from grain, water, and yeast.

His most recent stunner: Las Frescas.

Las Frescas is a sour beer series. Sour beer is a sprawling beer style that spans from gently tart brews like Berliner weisse to ferociously puckering lambics and wild ales. Las Frescas starts with a sour beer base on the milder end, with Wren House’s take on Berliner weisse. Thoeny spikes this base with fruit solids and juice, creating a beer that is part beer, part sangria-like infusion, part nectar. 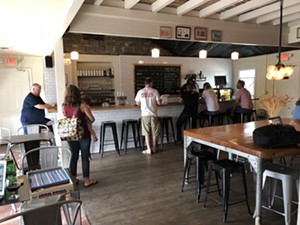 Wren House's bar.
Chris Malloy
“The original idea was it would be kind of reminiscent of those iced Mexican beverages, like agua frescas – more juice-based, super-palatable beers for the summertime,” Thoeny says.

Las Frescas is a schizophrenic series. The beer’s character completely changes each week. Past Las Frescas versions have included a magenta brew flavored with dragonfruit, and a tropical riff by way of pineapple, orange juice, guava, and cherry.

Las Frescas is born in two half-barrel brite tanks. Thoeny routs (recirculates, in beer speak) his sour base through the fruit, imbuing his sour base with the fruit’s essential flavor. He strains the beer in the end, and that’s that.

In line with one of today’s huge craft brewing trends, Las Frescas is cloudy. It’s as opaque as a concrete wall. Its colors can be as hot as neon signs. Its flavors are about as electric.

A late-April Las Frescas batch called Peach Cobbler united peach, vanilla, and cinnamon. (In a way, the beer nodded to Wren House’s Pie Series.) The beer had an amber, sunset-orange color and a lush peach flavor, almost like a Bellini, but thicker, more complex.


Las Frescas is a schizophrenic series. The beer’s character completely changes each week. Past Las Frescas versions have included a magenta brew flavored with dragonfruit, and a tropical riff by way of pineapple, orange juice, guava, and cherry

Las Frescas comes in a mammoth pink can or on tap. Typically, its ABV hovers low, right above 3 percent.

Thoeny cleanly hit his target of a beer for the masses. "It's one of those cool styles where big fans of craft beers like the style, but people who aren't traditional beer drinkers like the style too because it’s so inviting,” he says. “It's tasty, it's pretty, it's delicious. It's a fun little thing we do in the tap room."

If you want to get your lips on some Las Frescas, you should get to Wren House early on a Saturday. Production is limited. Las Frescas sells out pretty fast.

Other than the ABV, general sour-fruit formula, and release date – every Saturday – you never really know what a new batch of Las Frescas will bring.