10 Nerdy Things to Do This August in Metro Phoenix

You haven't truly heard "Eat It" until you've heard it on the cello. Live Nation

Bananarama themselves couldn't have predicted just how cruel this summer would truly be. With record-setting temperatures nationwide, the Valley's heat has certainly outdone itself this year, or at least that seems to be the case.

Committing to a month of hibernation might be a tempting thought, but before you start researching the cryogenic potential of your air conditioning unit, we would like you to consider these 10 nerdy, quirky, funny, and cool events that will be taking place this month. They should provide enough of a distraction for us as we make it toward the sweet relief that comes with those four lovely months that end in "ember."

The Prince of Parody has come a long way from his early days of playing twisted pop hits on his trademark accordion in Southern California bars. All these decades later, Yankovic is getting the orchestral treatment with his No Strings Attached tour. At one time, the comedy legend was considered by many musical purists to be the misfit of the music business. Well, who's laughing now?

Pretty much everyone, actually.

"Weird Al" will make his way to Comerica Theatre on Saturday, August 3, at 8 p.m. Tickets start at $38.50 and can be purchased through Live Nation.

Sadness supremacy will be decided this month at The Van Buren.
Ticketfly

The Cure vs. The Smiths

You'd think they'd make natural allies, but the U.K.'s two most fashionably depressed bands always have had something of a beef. And we all know how Morissey feels about beef.

That's what makes this event so special. It's a type of crossover that seems almost like a melancholy Marvel team-up, with one side asking just how soon is now and the other requesting audiences to show them, show them, show them how they do that trick. No matter what side you fall on, this night should prove to be a memorable one for those of us who aren't above providing a soundtrack to our depression naps.

The Cure vs. The Smiths will be bringing the sadness to The Van Buren on Saturday, August 3, at 9 p.m. Tickets range from $8 to $12 and can be purchased on the official Van Buren site.

Host Katie Bravo is back again with the Valley Bar mainstay that is Bar Flies, the show that proves that everyone has a story to share. The show has featured notable Phoenix personalities from various sub-sections of our artistic scene, from journalists to comedians to actors and so on. Each show features a different theme, with this month's being Child's Play. Despite the title, fans of murderous red-headed dolls might want to alter their expectations.

Bar Flies will return to the Valley Bar on Wednesday, August 7, at 7 p.m. Tickets are $10 and can be purchased through Eventbrite.


A 50-Year Celebration of Woodstock

It's been five decades since an army of free spirits ventured to Bethel, New York, for four days of monumental music acts and brown acid of questionable quality. It was, and still is, the standard to which all music festivals are held. The magic has never been recaptured in full, but this night at The Van Buren might be the closest experience we'll get in this lifetime.

A 50-Year Celebration of Woodstock will take place at The Van Buren on Saturday, August 17, at 8 p.m. Tickets range from $15 to $25 and can be purchased through the official Van Buren site.

Tempe Pollack Cinemas
1825 East Elliot Road, Tempe
The classic coming-of-age film captured the Carter era in a way that resonated with the youth of most every time period, and helped put talents like Ben Affleck, Matthew McConaughey, and director Richard Linklater on the Hollywood map. Lead actor Jason London may not have been as lucky, but don't let that stop you from enjoying this bongwater-stained cinematic masterpiece.

Crescent Ballroom
308 North Second Avenue
The man has worked alongside legends like Tina Turner and Ringo Starr, but it was his minute and a half of screen time in the 1987 vampire classic The Lost Boys that cemented his eternal legacy. He's got some fairly sick saxophone skills and he can carry a tune just fine, but it was his work in the baby oil and ponytail medium that really made him stick out, even in a film that had not only one, but two Coreys. Come see him live and in living color and party like you're on a Santa Cruz boardwalk among an audience of ruggedly handsome bloodsuckers.

The Lost Boys Night featuring Tim Cappello will bare its fangs on Wednesday, August 21, at 8 p.m. at Crescent Ballroom. Tickets range from $15 to $65 and can be purchased on the official Crescent Ballroom site.

Performed by The Mammoth
Ensemble
Crescent Ballroom
308 North Second Avenue
One of the Valley's most notable jazz acts are bringing their own interpretation to the score of the 1998 anime classic. Intergalactic Japanese bounty hunters in sharp suits are quite cool as is, but when you view them through the lens of one of America's greatest art forms, that coolness stretches for dozens upon dozens of light years.

Alamo Drafthouse (Tempe and Chandler)
1140 East Baseline Road, Tempe, and 4955 South Arizona Avenue, Chandler
Long before the Stranger Things kids hopped on their bikes and embarked on their wild adventures, there was a group of youthful heroes who served as the bane of a particularly disorganized crime family. The Richard Donner classic added an entirely new level of depth to playground role-playing, complete with pirate ships, ziplines, and deformed giants with hearts of gold. All these years later, it has still set the standard for cinematic childlike wonder.

Also, you get a teenage Josh Brolin and a delightfully rambunctious Cyndi Lauper soundtrack. What more could you possibly want?

The Goonies  will be playing at the Chandler Alamo Drafthouse from Sunday, August 18, through Tuesday August 20, and the Tempe location on August 18 and 19 and Wednesday, August 21. Showtimes vary; tickets are $12.40 and can be purchased through the official Alamo Drafthouse site.

All that trotting around the globe has led them to Phoenix this month.
Ticketmaster

Talking Stick Resort Arena
201 East Jefferson Street
Once you get past their flagrant disregard for the rules and traditions of basketball, they're actually a lot of fun to watch. The Globetrotters are to the NBA what WWE is to the UFC, in that a healthy suspension of disbelief and an appreciation for the theatrics are all it takes to appreciate the athletic antics of this sports-entertainment mainstay.

Admit it, you're mentally whistling their theme song as you read this. They've already got you hooked.

The Globetrotters will appear at the Talking Stick Resort Arena on Saturday August 24, at noon and 5 p.m. Tickets prices range from $20 to $145 but may fluctuate based on demand. Tickets can be purchased through Ticketmaster. 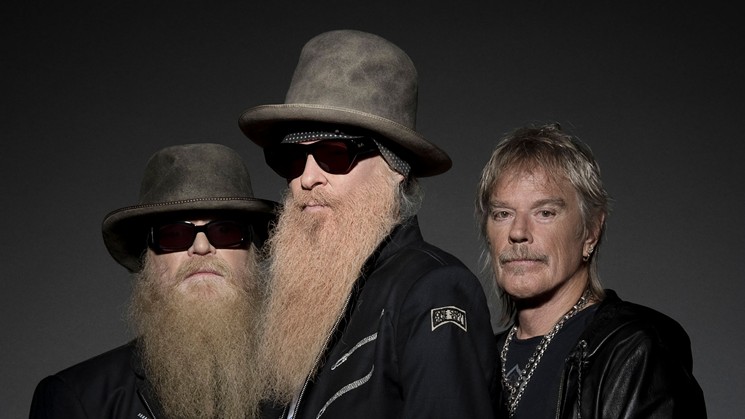 Billy and the boys will set up their "Sleeping Bag" at Comerica this month.
Ticketmaster

Comerica Theatre
400 West Washington Street
Long before hipster bands made prominent beards a requirement, this Texas trio was redefining American rock with their signature looks, strikingly original hooks, and appreciation for such concepts as pretty women's legs and sharp-dressed men. Other legendary rock bands have come and gone, but ZZ Top still stand tall, with their original lineup firmly intact. See them live, and you're sure to see why.

ZZ Top will appear at Comerica Theatre on Thursday, August 29, at 7 p.m. Ticket prices range from $48 to $275 and can be purchased through Live Nation.
KEEP PHOENIX NEW TIMES FREE... Since we started Phoenix New Times, it has been defined as the free, independent voice of Phoenix, and we'd like to keep it that way. With local media under siege, it's more important than ever for us to rally support behind funding our local journalism. You can help by participating in our "I Support" program, allowing us to keep offering readers access to our incisive coverage of local news, food and culture with no paywalls.
Make a one-time donation today for as little as $1.