Celebrate Martin Luther King Jr.'s legacy today. Library of Congress Prints and Photographs Division. New York World-Telegram and the Sun Newspaper Photograph Collection
From community celebrations of a civil rights icon to absurdist humor and a screening of Durant's Never Closes, there's a lot to be done this week in meto Phoenix. Need more options? See New Times' calendar of events — or our guide of to 50 free things to do in the Valley any time.

MLK Unity Parade and Festival
Most well-adjusted, working Americans follow a similar weekly trajectory: Mondays are rough, and Fridays are a breeze. But for many of us, the coming work week is going to feel a little backward. On January 20, we will inaugurate the most divisive candidate ever elected to our nation’s highest office, a man who appears to have exacerbated our differences for his own political expediency. Yet on January 16, we will celebrate Martin Luther King Jr., a man who literally gave his life fighting for unity, equality, and justice for the downtrodden. You’d be well advised to soak up some gaiety at downtown Mesa’s Annual MLK Unity Parade and Festival, One East Main Street, just in case you’re drowning your sorrows come Friday. Monday’s free festivities run from noon to 4 p.m. Visit the Mesa MLK parade website for details. Rob Kroehler Some pieces on display include Season of Silence (two bronze sunflowers), Sheltered (a bronze nest occupied by opalite stone eggs), and Petals of Still Lilies (six panels of silk hanging).

The gallery is found in the Herberger Theater Center, 222 East Monroe Street, and accessible through the box office. Hours for Monday, January 16, are 10 a.m. to 5 p.m., and the artwork is on display through January 30. Call 602-252-8497 or visit www.herbergertheater.org. Lauren Cusimano 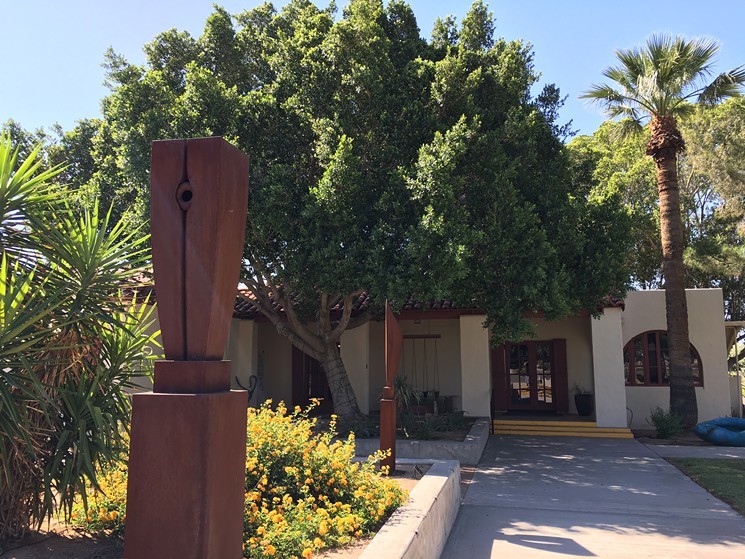 Shemer hosts a must-see watercolor exhibition.
Lynn Trimble
"22 x 30"
Tucked back off Camelback Road, at the base of the mountain of the same name, the Shemer Art Center is the perfect place for a weekday art reprieve.

Fifteen artists from the 22 x 30 watercolor collaborative — named for the dimensions of sheets of watercolor paper — showcase their detailed paintings of everything from landscapes to abstract creations. Founded by local artists in 1972, the group’s original purpose was to critique art. Now, with this new exhibition, their own creativity is on display. Admission is free, though a donation of $7 per person is suggested. See Shemer's website or call 602-262-4727 for details. Janessa Hilliard

Courtesy of Russo and Steele
Russo and Steele Preview Day
Are you desperately in need of a 1970 Plymouth Superbird to complete your vintage car collection — or is simultaneously ogling and drooling more your style? This preview day at Russo and Steele’s Collector Automobile Auction lets you make your real or pretend wish list. Feast your eyes on more than 800 classic vehicles, from European sports cars to American muscle, hot rods, and customs. Auctions happen Thursday through Sunday, and feature a signature “auction in the round” format. This high-energy bidding style brings the cars, sellers, buyers, and spectators together on the auction floor. The countdown to car wars is from 9 a.m. to 5 p.m. on Wednesday, January 18, at Salt River Fields at Talking Stick, 7555 North Pima Road in Scottsdale. Admission is $30. Call 602-252-2697 or visit Russo and Steele online. Amy Young Courtesy of Arizona School for the Arts
Shooflies
Bar Flies, the monthly storytelling event put on by New Times and typically held at Valley Bar, already has a spinoff. Shooflies: Narrative Slices of Pie features high school seniors from Arizona School for the Arts telling stories from their unique perspective: teenagers who are now technically, or soon will be, adults.

See a local film at the Valley's newest indie theater.
Running Wild Films
Durant's Never Closes
Early last year, while the rest of the country was buzzing about what actors and films would take home the big, shiny awards, there was one movie that was all the buzz in the Valley: Durant’s Never Closes. And now, almost exactly a year from its original release date, you can catch this flick on the big screen one more time. Running Wild Films’ movie explores local legend Jack Durant, the Phoenix steakhouse owner who seemed to know everyone’s secrets but remained a mystery himself. Tom Sizemore will take over the screen as Jack at Alamo Drafthouse Phoenix, 4955 South Arizona Avenue in Chandler, at 6:30 p.m. on Thursday, January 19. This screening is a part of a series of Running Wild Films’ movies all weekend long, and the film’s writer, producer, and director, Travis Mills, will give a special introduction. Tickets are $10 and can be purchased at the Drafthouse website. Evie Carpenter

Eugene Mirman is scheduled to perform Thursday, January 19, at Crescent Ballroom.
Brian Tamborello
Eugene Mirman
You likely recognize Eugene Mirman’s rather unique voice as that of Gene Belcher in the sweetly off-kilter family-centric animated series Bob’s Burgers. You might even remember him from his reoccurring role on Flight of the Conchords. Mirman’s roles in many different comedy series have kept him in the public eye, while his 2015 Netflix special Vegan on His Way to the Complain Store gave special Arizona ties, as it was filmed at the historic Old Tucson Studios. From his simplistic, yet hilarious drawings to his generally absurd brand of humor, Mirman’s proven his style is one of a kind. You can catch him live at Crescent Ballroom, 308 North Second Avenue, on Thursday, January 19. The show begins at 8 p.m. and it is a 21-and-over event. Tickets, $22 per person, are available, along with more information at Crescent Ballroom's website. Heather Hoch

"Educated in Whiteness"
Fact: White privilege exists. Fact: It affects everything in our country from the job market to politics to Hollywood. And fact: It operates at basically every level of our school systems, but it doesn’t have to. From 6:45 to 8:30 p.m. on Thursday, January 19, Dr. Angelina E. Castagno, associate professor of educational leadership and foundations at Northern Arizona University, will lead a Q&A session about her book, Educated in Whiteness. In this free discussion, Castagno uses her background in educational anthropology to look at two middle schools to talk about the ways race and power play roles in the education system, how diversity-related policies affect students, and the difference between equality and equity. RSVP for the event at Arizona Humanities, 1242 North Central Avenue, by registering at Eventbrite. Evie Carpenter

Read on for more ways to spend your week — including a derby debut and 3 No Trump.